I will be participating in my first pie contest next month. I've made countless pies over the years, but one can never be too ready. So, last week I made a couple of practice pies. 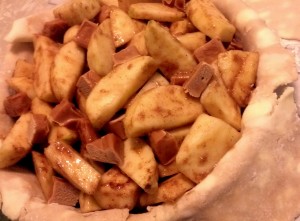 The first one was my "control" pie. It's the ever famous Chopping Block Apple Pie that you all know and love. The second was the same pie with some modifications. I called it Caramel Apple Pie. I used the same pie crust recipe (see below) on both pies. Why try to fix something that isn't broke, right? I played with the filling to see if I could make it stand out from a regular, albit great apple pie. I sliced my apples on the thicker side to hold their shape and texture, added cinnamon, flour, a touch of fine sea salt, then instead of regular white sugar I added about half the amount in brown sugar, a teaspoon of vanilla and some chopped up caramels that you can buy individually wrapped. 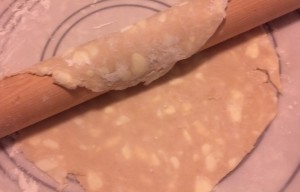 I baked both pies at the same time, 350 degrees until I saw bubbles poking out of the slits on top of the pies. The hardest part was waiting until they were completely cool before tasting. I had two judges of my own try them - my husband who has the most amazing palate ever and my mother-in-law who has NO problem being critical... I mean, giving me constructive criticism.

Both of my judges agreed that the crust was amazing. My MIL even said she never eats pie crust because it's never very good but she loved mine. It was flaky and buttery and melted in your mouth. My "control" pie was just as awesome as it is every time I make it. My experimental pie has some good and some not so good results. The addition of brown sugar added a nice depth of flavor but made the pie a bit too sweet even though I cut the sugar down. I really liked the addition of the caramel, which also added to the sweetness of the pie. I thought it was a nice surprise when you got some in your bite but my judges had a hard time detecting it due to the addition of the brown sugar. So based on my practice pies, I know what I'm going to do for my final pie entree. You'll have to check back to see what that is and how I do in my first pie contest. Wish me luck!

Put flour, sugar and salt in the bowl of a food processor fitted with a metal blade. Add the shortening and butter to the processor and pulse mixture until crumbly and butter is in small pieces throughout the flour. With the machine running slowly add the entire 1/3 cup of cold water. Process until the dough just forms a ball.

Turn out dough onto a work surface and form into an oval. Cut the oval in half and press the cut side of each disc down to form a disc. Wrap in plastic wrap and refrigerate for at least 2 hours.