A Love Letter to Excess

Those of us who have grown up around diet culture have invariably spent some portion of our lives denying ourselves in the interest of some nebulous concept of “healthiness.” Some who reject the austerity prescribed by the latest fad diet aim to live by the more tempered philosophy that we can enjoy anything in moderation. While this motto is certainly more lenient, us restaurant cooks tend to add a little bit more to the “all in moderation” lifestyle. To that pithy aphorism we add “all in moderation, including moderation”. Which is to say, sometimes you need to go HAM in order to really lead a life worth living. Sometimes it is truly necessary to go back for that fifth piece of pizza, or the third slice of pie. Sometimes you really do need to consume to excess in order to access what it means to be fully human. 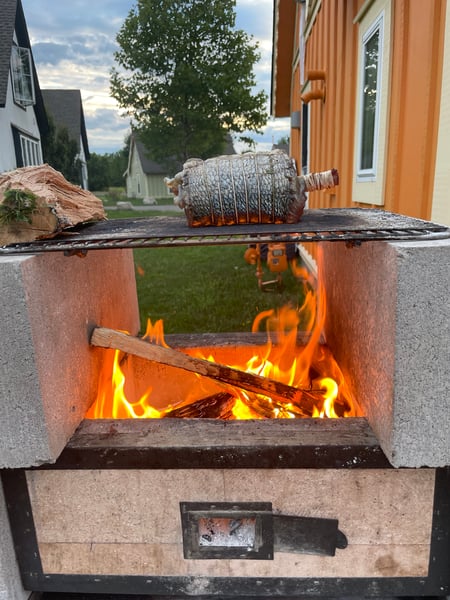 Before I moved to Chicago I lived in New England for about seven years. This is where I because a restaurant cook and chef, and a lot of my culinary upbringing is tied to that location. When I moved away, I was definitely ready for something new, but of course there would be things I missed. As it turned out those things would be relatively few. I missed—to a certain extent—well executed hazy New England style IPAs, but the thing I missed most of all was seafood.

It's not that you can’t get seafood in Illinois; you can. You can even get pretty high quality seafood. The problem is that no matter how hard you look the seafood in the Midwest just lacks that magic that it has right off the coast. I’ve been to at least a half dozen fish mongers, and I’ve even eaten at two-Michelin-starred seafood-focused fine dining restaurants and sushi spots (which presumably get most of their fish overnighted from Japan). Across the board the fish, shellfish, bivalves, crustaceans, mollusks and cephalopods top out at a quality that I would describe as “very good.” Nothing wrong with very good, it's very good after all, but it just isn’t quite magical (or as the kids say these days “S-tier”). This is why, when I visit New England, I keep my “all in moderation including moderation” motto in my heart and vow to eat nothing but seafood all day every day.

In keeping this promise, my wife and I most recently dined at a restaurant in Warren, RI called Bywater where our friend (and ex-roommate, and alum of Blackbird, Smyth, Middlebrow Bungalow, and others) is the head chef. We were served—among many other things—an exquisite whole grilled mackerel, and a platter of what was probably the best set of fish crudos I’ve ever had. 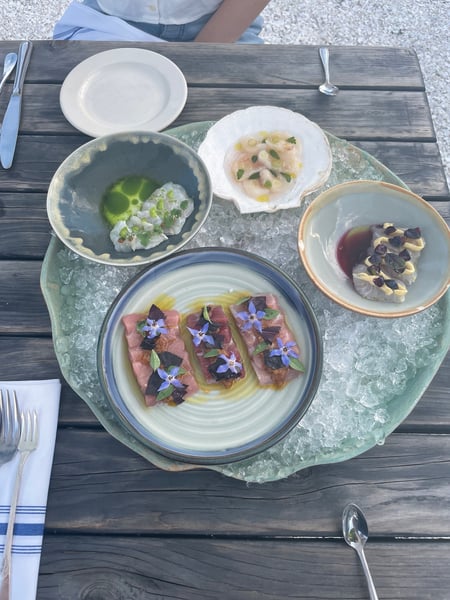 This inspired me to try and bring some of the magic home to upstate New York. I had brought my big cooler because I was planning to stop in Jefferson, NY on the way back to try some incredible butter (but that's for another post), but there was plenty of extra room for me to try to bring back some of that magical seafood I had been gorging on the past few days.

I ended up going to the amazing Andrade’s Catch in Bristol, RI to pick up a half dozen oysters, a pound of incredible mussels, a half pound of diver scallops, and a whole eight pound bluefish. After this I drove back over to Bywater (about a 15 minute drive; Rhode Island is very small (Hi, neighbor!)) And Chef Luke sliced us off a roughly three pound section of pristine big eye tuna loin, and filled out cooler with the good ice (if you know, you know).

As a brief aside, something else I picked up from Andrade’s catch was a bottle of really high quality extra virgin olive oil. This is a widely misunderstood product in my opinion, and it's misunderstood in a way that directly relates to our theme of indulgence. Extra virgin olive oil can be expensive; especially the really good stuff. This means most people can’t afford to buy it all the time. It is human nature to try to save things that we feel are precious, so many of us try to stretch that nice oil out as long as we can. That or we leave it untouched in the pantry because we are waiting to use it “for a special occasion.” But some ingredients, including really nice olive oil and really fresh seafood, are simply not meant to be hoarded. They are meant to be enjoyed. A bottle of spectacular olive oil will not stay spectacular for long. There is no point waiting or rationing. Douse everything you can think of with that oil until you’ve run it out, and run it out as fast as you can. The same goes for seafood. You’ve got a very short window of time to eat it and still feel the magic. So don’t wait! Indulge without guilt for anything less would be disrespectful to the product, not to mention a waste of time and money. 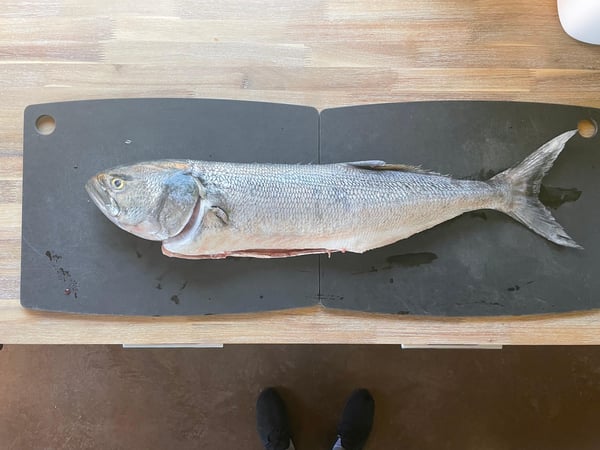 We ended up being inspired to make some crudo of our own. One with the incredible tuna gifted to us by Chef Luke, which we paired with some Sichuan chili oil, lime juice, mint, and anise hyssop, and the other with some of the lovely diver scallops from Andrade’s catch served with some of the aforementioned olive oil, some basil vinegar, and garlic chives along with their flowers. 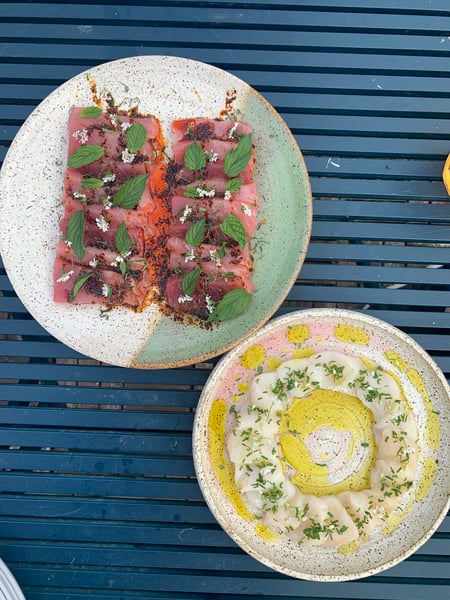 The center cut of the bluefish I deboned, lightly cured, butterflied, then slathered with garlic, dried coriander, green coriander, thyme, rosemary, winter savory, and parsley, and rolled it all up (basically fish porchetta), then grilled low and slow over oak wood. 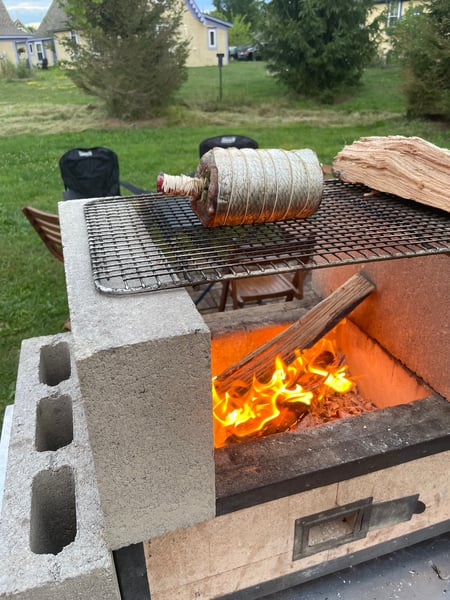 The rest of the bluefish I turned into an absolutely mind blowing Thai style curry with a fresh homemade curry paste made using a mortar and pestle (but that's also another post), while the oysters and mussels were eaten the day after we got back for an oysters on the half shell and Moules Frites lunch. I knew I had accomplished my goal when my wife pleaded for anything but fish to eat the next day. We had eaten a heroic amount of food from the briny deep and the disgust we felt at the prospect of any more meant my job was done. Until the craving hits again, of course. Then it will be back in the car to make the six hour trip back to that magical land where the fish is sweet and the people are sour.

If you enjoy seafood and excess as much as I do, I recommend heading down the the Lincoln Square location of The Chopping Block and checking out our upcoming Italian Surf-and-Turf on the Patio class. We also have Shellfish on the Grill which features a menu chock full of delicious seafood: