Insta-Party: How to Throw a Party with your Instant Pot

Whenever the newest gadget or electric device comes out for the kitchen, it's usually poo pooed by chefs. But that's definitely not the case with the Instant Pot. This miraculous time-saver has been out for a couple of years now, but I really just started hearing about it seriously in various food blogs I follow last fall. It was as big of a buzzword as the Keto Diet. Intrigued, but not yet convinced that I needed another kitchen appliance to take up room on my pantry shelf, I waited and read about it. Then, a chef friend (who's also a former instructor at The Chopping Block) whole-heartily endorsed it (and even wrote this article for the Chicago Tribune), and I knew I needed to check out the Instant Pot for myself.

For those not familiar, the Instant Pot (and even though I'm guilty of combining these two words into InstaPot when speaking, they are actually separate), the device combines an electric pressure cooker, slow cooker, rice cooker, and yogurt maker into one handy tool. The interface can be intimidating, but there are a whole lot of buttons you'll never use. 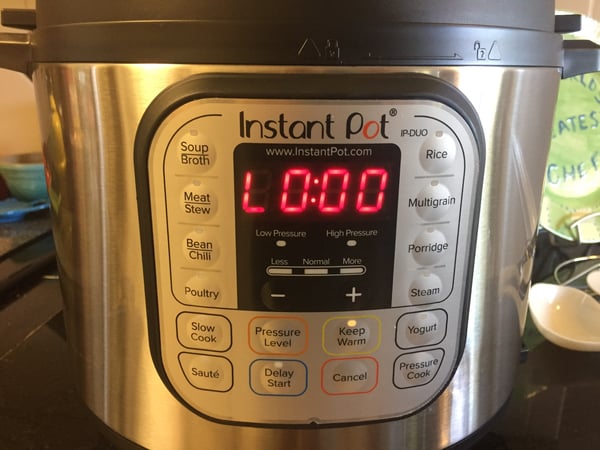 That's because instead of choosing "soup/broth", "meat/stew", "poultry", etc., you'll just select whether you want to cook on low or high pressure and the amount of time. Think about your microwave. Do you ever press the "potato" or "vegetable" button? No. You just enter the time and maybe the power if you want to nuke something.

Since I've gotten my Instant Pot, it's been a time of experimentation. And to be honest, that's just something you have to accept when you use the Instant Pot. There is no firm guide to using the unit (at least, not yet). There are some cookbooks out there but it can be hard to know which is the best. There are lots of charts for cooking times online and countless blogs with Instant Pot recipes, but as I've learned (and sometimes the hard way), you just have to play around with it a bit and use your best cook's judgment. The premise of Lisa Futterman's Tribune article I mentioned earlier is that the Instant Pot is only as good as the cook who uses it, and I can't agree more. You must use your instincts and your cooking knowledge to weed out the bad recipes (and believe me, there are tons of them on Pinterest) and tweak the good ones to fit your taste.

I really put this theory to the test when I decided to host an Instant Pot themed party for my book club. The goal: make the entire menu in the Instant Pot to see how many different techniques I could try. I wouldn't advise doing this for just anyone, but my ladies can be forgiving when it comes to food, so I figured it was worth a shot. I will give each technique demonstrated by the dishes on the menu an Instant Pot Game Changer rating. 5 means it will change your life and 1 means don't bother.

First up, hummus. You've probably already heard the claim: you can cook dry beans without soaking in the Instant Pot, and they are ready in just minutes. Turns out this is totally true! The best part is that if you make a whole pound of chickpeas, you can freeze half with some of the cooking liquid and easily whip up another batch of hummus on the fly in the future. 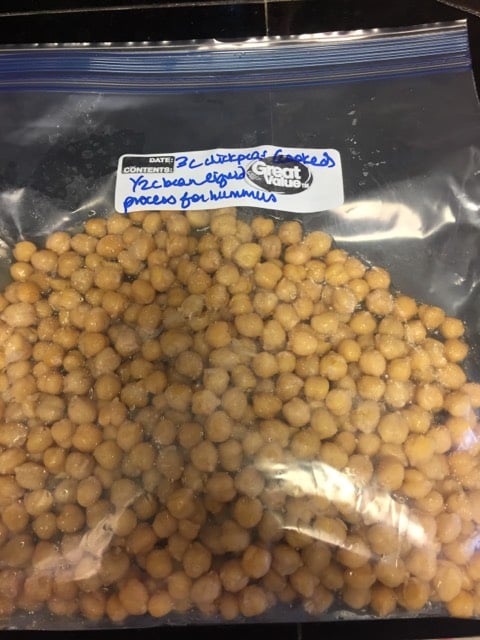 Cooked chickpeas with liquid ready for the freezer

I used this recipe from Everyday Maven as a guide and tweaked to my preferences. It's important to note that while the beans only pressure cook for 35 minutes, it does take some time for the machine to come to pressure and then you'll also need to account for the time to release the pressure (either done naturally or with a quick release). In this case, it took about a half hour for the natural release to occur, so all-in-all the total time it took from placing the raw beans and water into the pot and then pulling them out to drain was about 1 hour, 15 minutes. Still a lot shorter than the traditional soak and stovetop method. 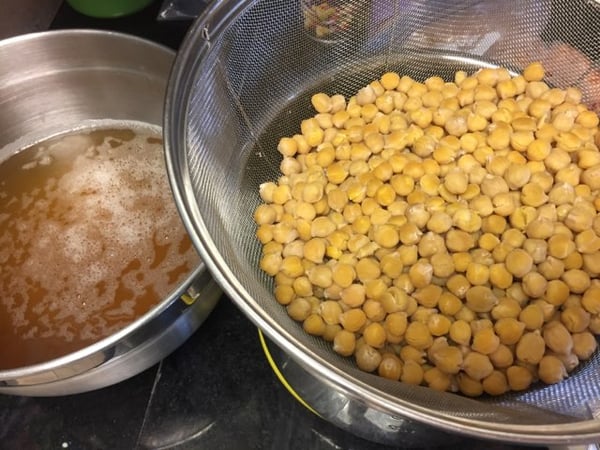 Once your beans are done, you just process in the food processor and flavor as you normally would when making hummus. 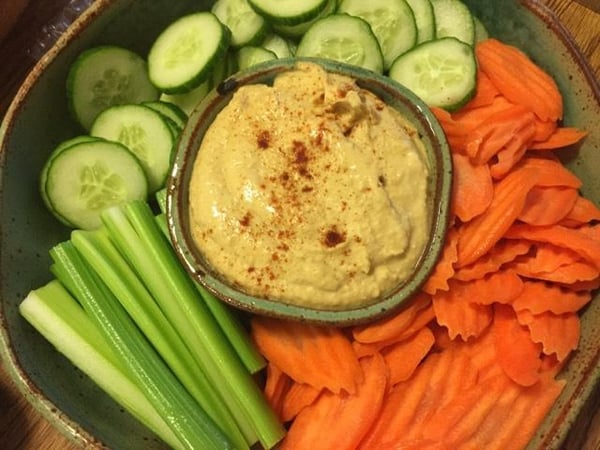 Next up, everyone's favorite party dip, Artichoke and Spinach Dip. Sure, you can easily make this in your slow cooker but that will take a couple of hours. This recipe from Adventures of a Nurse claims to be a copycat of Applebee's Spinach and Artichoke Dip. I'm pretty sure I haven't eaten at an Applebee's since college, and it's doubtful I've ever had that dish, but I figured it was a good place to start. The beauty of this recipe is that you literally throw everything into the Instant Pot and it's ready in less than 5 minutes. It didn't seem possible since it includes adding a frozen block of spinach, but the dip came out smooth and creamy. You just stir it around and put it into a serving bowl. The homemade pita with smoky paprika I baked in the oven took more time than the dip! 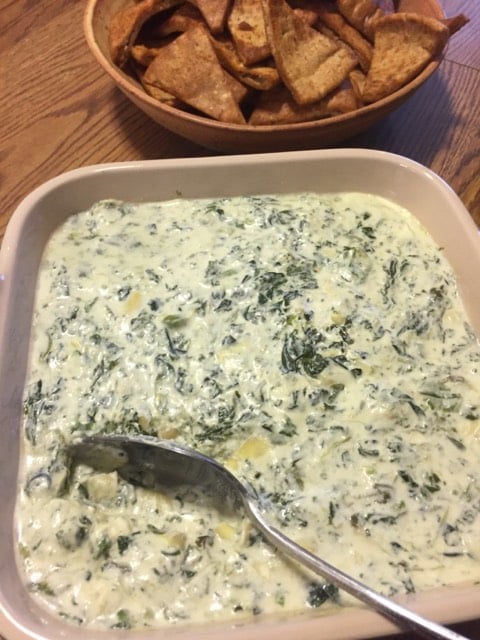 Making eggs in the Instant Pot is something that took some experimentation. After a few missteps and a dozen eggs ruined, I think I've finally found the right method for the way I like my hard-boiled eggs. Here's the caveat: the Instant Pot will not save you time when making hard-boiled eggs. What is does instead is produce the easiest eggs in the world to peel. And for someone like me, who doesn't always think ahead to buy eggs and let them age before boiling so that they are easier to peel, the Instant Pot saves the day. The eggs I steamed to make Deviled Eggs for this party (and purchased at the grocery store on the same day) were so easy peel! That's because the pressure helps inflate the air pocket between the cooked white and the shell. 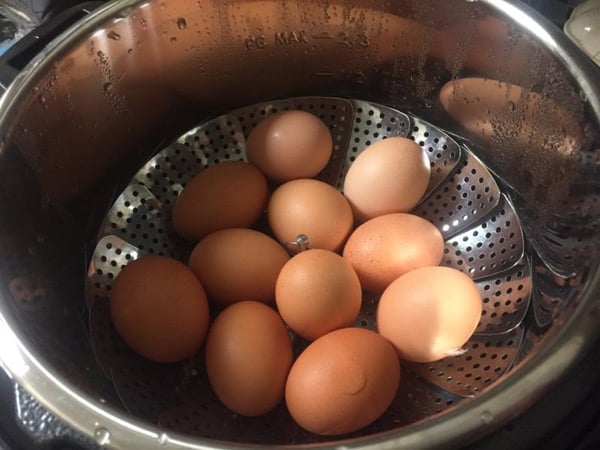 Here's the method I use for for hard-boiled, fully set yolks perfect for Deviled Eggs:

I used this recipe from Amy + Jacky as a starting point but simplified the marinade to just soy sauce and rice wine vinegar. This was one of the first times I used the saute feature on the Instant Pot. I was impressed with how quickly it got hot. You'll know when the oil starts to sheen. I browned the wings on both sides for a few minutes and removed them then added minced garlic and ginger to saute. 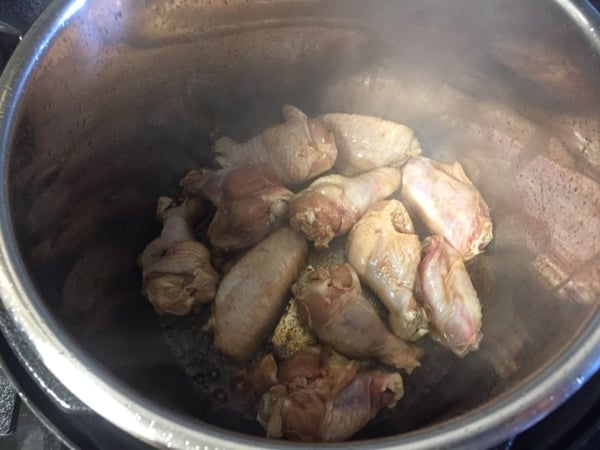 Then you add the wings back to the pot along with the leftover marinade. I love that you can do this with an Instant Pot because there's no question that marinade will be brought to the proper temperature so that it's safe to eat. Bonus points for not having to pour it down the sink!

The wings cooked for just 5 minutes and then naturally released. I removed them from the Instant Pot and thickened the sauce with a slurry, again on the saute setting.

The wings were incredibly flavorful and tender, but as I suspected, the skin was mushy and unappealing. So, I threw them under the broiler for a few minutes and tossed around a few times to get that caramelized texture I was looking for. They were still tender but the skin was a much better texture. 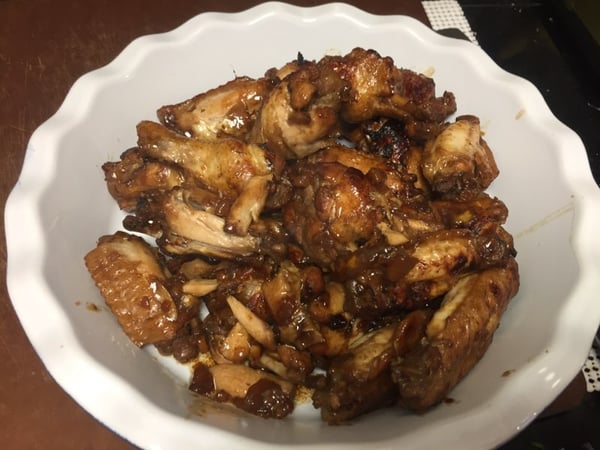 While I would probably just stick to grilling or smoking wings in the future, there's a lot to be said about the ability to saute and then pressure cook in the same pot, eliminating another dirty dish.

I was skeptical about making dessert in the Instant Pot, but once you commit to a party theme, you must stick to it. So I researched the best kinds of desserts to make in the multi-cooker. Custards like flans and cheesecakes work very well in a moist environment, so I decided to give Cookies and Cups' Salted Caramel Cheesecake a try.

You'll need a 7-inch springform pan which fits inside the Instant Pot. It seemed like a strange size at first, but it actually makes the perfect amount of dessert. While I would love to indulge in leftover cheesecake all week long, my diet disagrees.

I loved the Ritz cracker crust in this recipe because it added a nice salty touch. You just pulse them in the food processor and add butter and sugar.

Press the crust into the pan and mix up your cheesecake mixture. 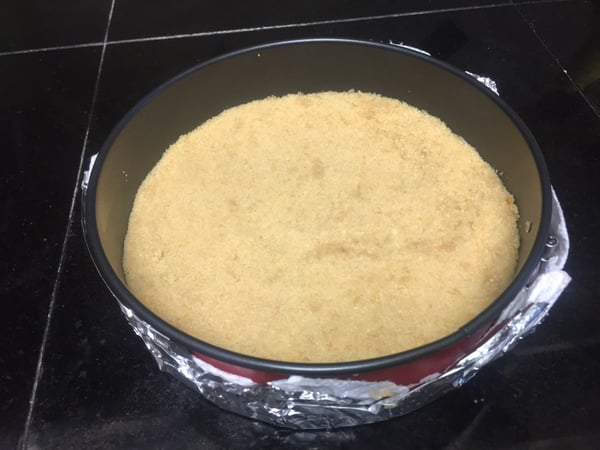 You'll notice I have a paper towel wrapped around the bottom of my pan and then aluminum foil around that. That is to prevent moisture from getting inside. I've since made a few more desserts and skipped the paper towel step. I think if you have a quality springform pan, you don't need to worry about that. But since this dessert was for a party and I didn't have a backup, I didn't want to take any chances.

Perhaps the most useful trick I learned from Cookies and Cups was to make a "sleeve" out of aluminum foil to easily get the springform pan out of the Instant Pot while it is hot. Check it out: 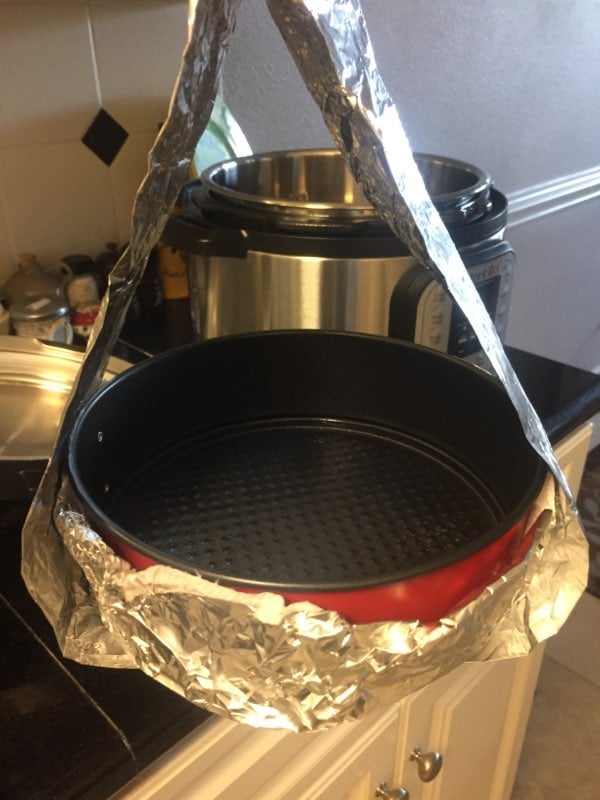 Clever, right? Here it is in the Instant Pot. You just fold the sides down and tuck them in. 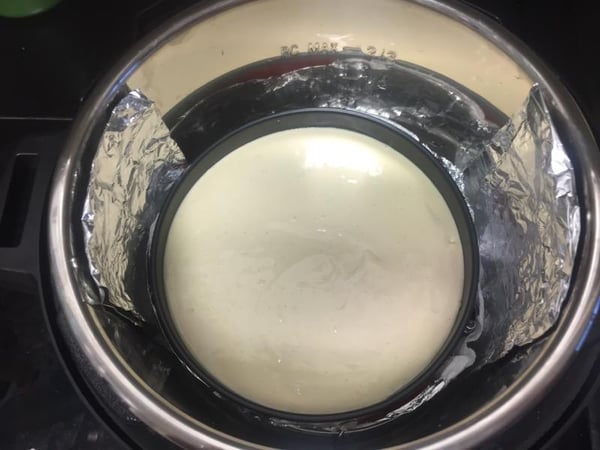 This cake cooked on high pressure for just 35 minutes and naturally released. There was a little bit of moisture on the top of the cheesecake since it wasn't covered, but I carefully soaked it up with a paper towel and it was fine. I chilled the cake overnight and then made The Chopping Block's Caramel Sauce to put on top. Here's a video with our Owner/Chef Shelley Young to walk you through making that:

I'll admit that I typically have issues with my cheesecakes, especially cracking. Using the Instant Pot takes the guesswork out of it! All of the book club ladies loved this dish, and it will definitely be on my next dinner party menu. The consistency was dense, moist and creamy and the cracker crust was the perfect salty complement to that incredible sweet caramel sauce. 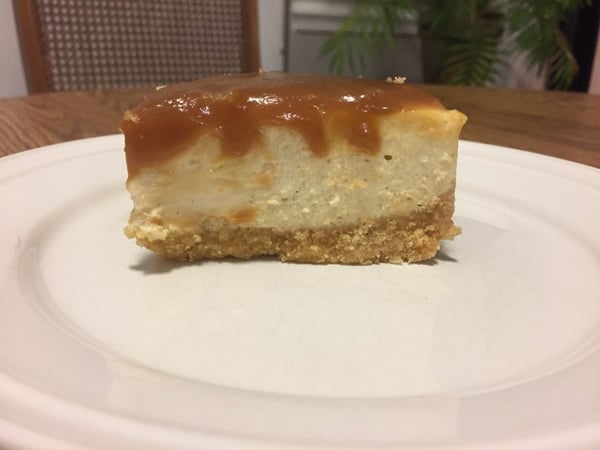 Now, don't get me wrong. There have been plenty of Instant Pot fails along the way and a lot of dishes that would get a "1" rating. For instance, turkey meatballs stuck to the bottom of the pan so much I had to turn them into Sloppy Joes. But with each misstep, I learn a little bit more about how this multi-cooker works, and I'm having a blast playing with it.

Don't miss my colleague Erica Forneret's recipe for Chicken with 40 Cloves of Garlic in the Instant Pot. Stay tuned for my next post as I test recipes for a friend who's writing an Indian Instant Pot cookbook. Combining my love of Indian food with my love for my Instant Pot? Yes, please #EssentialIndianInstantPot!

Would you like to see Instant Pot cooking classes at The Chopping Block? Let me know in the comments!