One of the first cakes I ever learned to bake was a pineapple upside-down cake. I can remember Mom explaining to me that the bottom would become the top and that sounded so magical to me! We arranged the pineapple rings “just so” in the pan, and even added in maraschino cherries “so it would have some color”. Undoubtedly her red plaid Better Homes & Gardens cookbook was nearby providing divine guidance along the way; that cookbook was a fixture in our kitchen! I think it was love at first sight for me when “we” turned that cake over and removed the pan: Wow - it really worked! In hindsight, I can only imagine her relief! And so it goes… I’ve had a soft spot in my heart for upside-down cakes ever since.

And so it was that my heart skipped a little beat when I recently ran across a picture of an apple upside-down cake. However in this case, instead of pouring cake batter over the apples, there was placed an enormous cinnamon roll – which then, of course, became the bottom. Okay, so then my heart skipped two beats, as visions of gooey cinnamon-apple-y goodness swept across my brain, and I realized I just had to try this. Since cinnamon roll dough is a yeast dough that needs time to rise, I knew this would take a little more time than the usual upside-down cake; but oh the end result was so going to be worth it!

I put together my favorite sweet dough and set it aside to rise. I greased my springform pan and added a round of parchment so nothing would stick. I cored and peeled some apples, stirring them into a little caramel and butter on the stove top and arranged them “just so” in the pan (no maraschino cherries with this one!). Once the dough had risen, I rolled it out and sprinkled it with butter, cinnamon and brown sugar. Then I cut it into strips and just kept rolling the strips one after another until I had one huge cinnamon roll – and the whole time, I couldn’t stop giggling because it was really a lot of fun to watch this thing take shape. When I was done, I plunked the whole thing on top of the apples in the pan and set it aside to rise a second time. Here’s what it looked like when it came out of the oven. 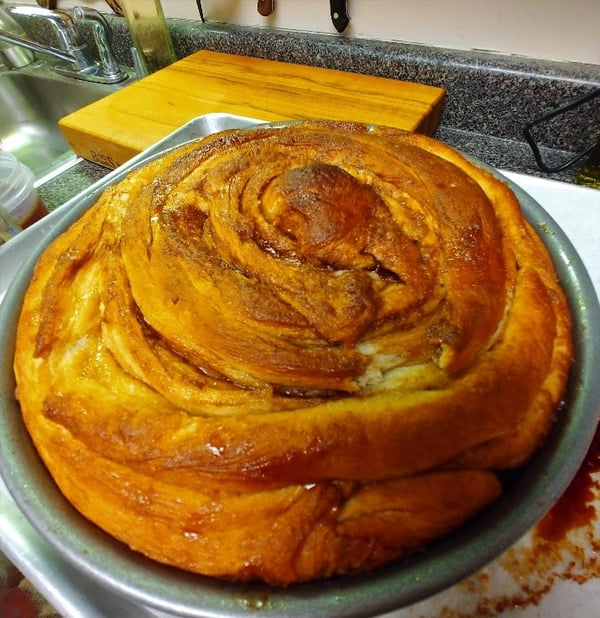 I mean really, how cool is that? And so, if this blog post was only about this cake, I’d be showing you all kinds of pictures with hints on rolling out the dough and making the caramel for the apples. But alas, not every story goes along in a straight line, now does it?

I let it rest a bit in the pan, giving everything a chance to settle. And then I did what my head knew I should not do… but my heart couldn’t help itself… I peeked. I released the springform pan and oh my, it was beautiful, the apples were set, the dough hadn’t stuck to the pan; this was going to be SO GOOD! But I couldn’t reattach the ring back to the bottom. And I still had to turn it upside down. Oh, my head was so mad at my heart! I put the ring around the cake to stabilize it as best I could, but the pan bottom was sitting – unattached! – on the parchment-lined sheet pan it baked on.  As I put a plate on top of the cinnamon roll and got ready to flip, I scooted a little bit over the sink just in case any juices ran out.

And the next thing I remember is hearing my husband ask from the other room, “What happened?” It may have been the crash. Or it may have been something I blurted out. Honestly, it’s all a blur to me. All I know is that my cake was in the sink: it was truly upside down… and then some! Sheet pan, springform pan parts, parchment, apples, cinnamon roll. And the only thing I remember thinking was, “Thank goodness I just cleaned the sink, maybe I can figure something out.” And when my husband gingerly tip-toed into the kitchen, he found me giggling – again! – as I was valiantly scooping out the edible bits. I had myself an honest-to-goodness cake catastrophe, but what else could I do?

Here are the cinnamon roll and apple parts I was left with: 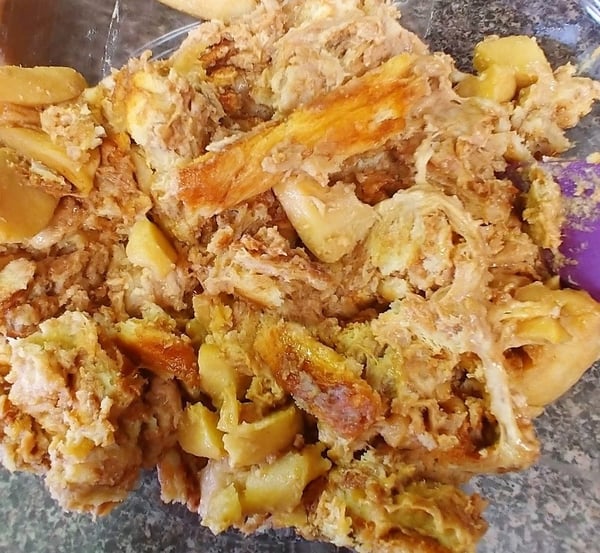 It’s not nearly as pretty, but these scraps sure did taste good! Not wanting all that apple peeling and coring and caramelizing and dough-rising to go to waste, I thought maybe I could make a sort of bread pudding… with the cinnamon roll bits as a stand-in for bread. I also happened to have some “apple bourbon moonshine” that a friend brought me awhile back. Something good had to come of this!

So I buttered up a cast iron pan, soaked some raisins in the bourbon, and whisked together some eggs, milk, cream, vanilla and spices.

Then I tossed in my cake scraps and those bourbon-soaked raisins and let it all just sit and soak for a few minutes before pouring it into the cast iron pan. I dotted the top with butter (why not?) and popped it in the oven. While it baked, I used more of that apple bourbon to make a syrup to pour over the top: 2 cups of sugar, 1 cup of water, 2 cups of bourbon, a cinnamon stick and a couple pats of butter – and just let it bubble away until it was reduced to a nice, thick pour-able syrup. 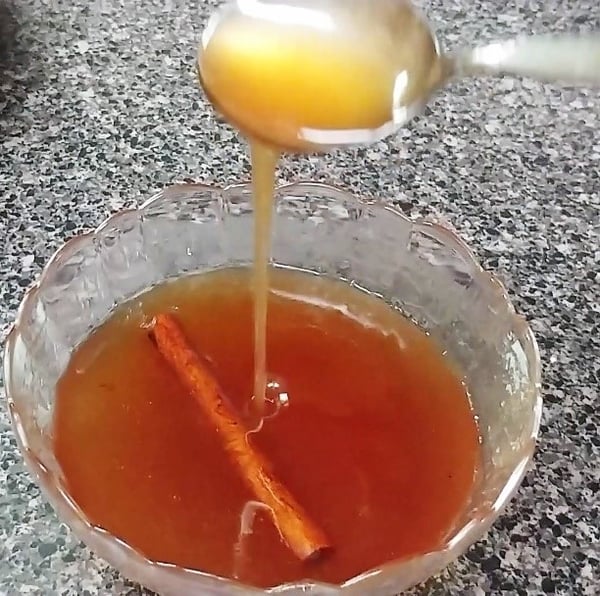 By that time, the pudding was done. 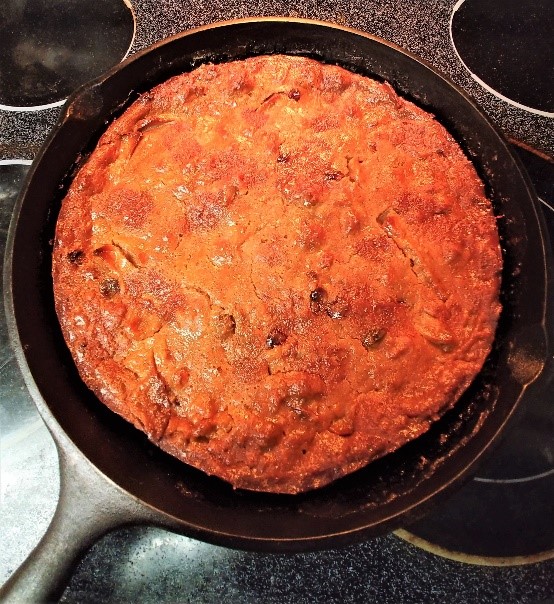 And finally – FINALLY – we had dessert!

No, it wasn’t what it started out to be. And it certainly wasn’t my “vision”. But it WAS a really good recovery and a scrumptious bread pudding full of gooey cinnamon-apple-y goodness, just like my upside-down cake was going to be. And I think I’ll just have to give that one another go again some time soon!

With Thanksgiving coming in just a couple of weeks, do you have baking on your mind? Check out The Chopping Block's baking and Thanksgiving classes, and you’ll be all set – no cakes in the sink for you!

If you really want to avoid the possibility of a baking disaster, let our chefs bake your Thanksgiving pies for you. We're offering our famous Apple Pie and classic Pumpkin Pie again this year. Choose your pick up location and pick up date!