Saying I Do to Cooking Together Forever

Over the 24 years The Chopping Block has been open, we've seen a lot of people find love in our kitchens. I know of several couples who met during a cooking class who are still together today. Former members of our culinary staff have married other former staff members and even students! We've hosted countless engagement parties, anniversary celebrations and even a wedding rehearsal dinner or two, but until recently, we hadn't had a wedding proposal happen during a class.

Alec Ahrens and Kate Marciniak attended Culinary Boot Camp last November and on day three of the class, Alec proposed to Kate during the class lunch break on the patio of our Lincoln Square location. She, of course, said yes! 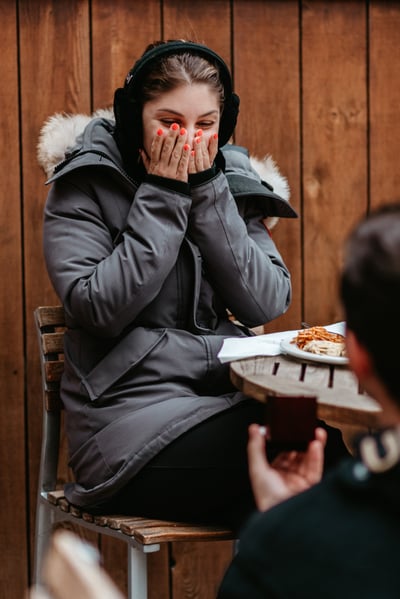 Kate says she had no clue the proposal was coming. "In fact, we laugh about it now, because it had been such a long week at work, our new puppy had been sick, and we were exhausted. I told Alec I was going to wear a comfortable outfit and put my hair in a ponytail for class. He suggested I might want to put on a pair of jeans. Later when we were eating lunch outside during class, I was so hungry that I took a big bite of pasta right before he got down on his knee and asked me to marry him. I was very unaware of what was going on!" laughs Kate.

Alec had gotten the ring in March 2020, but he wasn't sure how he wanted to ask the girl of his dreams to marry him. He said he felt like an opportunity would make itself apparent. As Culinary Boot Camp approached, Alec realized that during a cooking class was the perfect opportunity to propose to Kate because cooking is something they like to do together.

Unfortunately, restrictions by the City of Chicago due to COVID-19 forced us to suspend that class in November, so Kate and Alec just wrapped up their final two classes earlier this month. That wasn't a problem for the newly-engaged couple because it gave them something to look forward to during the cold months of winter. "It was fun to come back to it, and we were really excited for the final day where we got to design and execute our own menu featuring techniques we had learned in previous classes," said Alec.

The Chicago couple has been together for almost four years, and they plan to tie the knot in March of 2022. 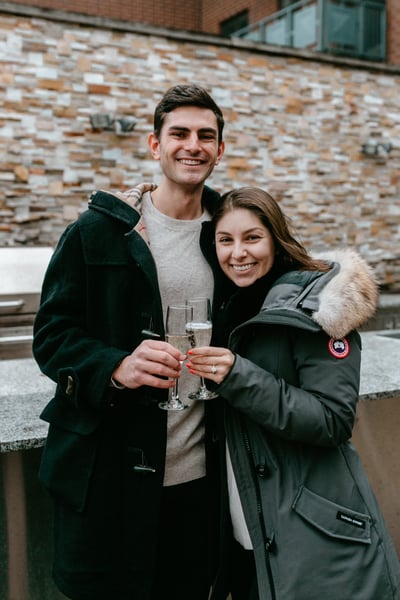 From Convenience Cook to Confident Cook

Although Kate and Alec enjoy cooking together these days, Alec didn't always like to cook. "Before I met Kate, my cooking skills were pretty much limited to my Instant Pot. My mom got one for me while I was in college, so I would typically just throw some chicken breasts and vegetables in it to make dinner. It was easy and tasted fine, but I didn't really like to cook. I was definitely a convenience cook, not a gourmet chef," said Alec.

Kate, on the other hand, has always loved to cook and learned from her grandmother who was an excellent cook. Kate enjoyed making healthy food and experimenting with new recipes, but she admits she didn't have a wide range of cooking techniques in her repertoire. "I would throw things together and it would work out, but I didn't have a variety of techniques to turn to," said Kate.

After Alec was introduced to cooking by Kate, the couple has really found their passion in cooking together. They cook together a lot at home and enjoy taking local cooking classes whenever they travel. One class that stands out to both of them took place in 2019 in Portugal.

This day-long class happened in the seaside town of Porto and was taught by a chef who is pretty famous in Portugal. They met in the kitchen but then traveled to a huge market featuring fresh seafood caught earlier that morning. They learned how to pick out fresh fish and then selected each ingredient they were going to cook with from the other farm stands at the market. Kate loves farmers markets and grocery stores, so the market was a huge highlight of the class for her.

They used their market bounty to make a classic Portugese dish called Cataplana, which neither of them had ever eaten or made before. Cataplana is both the name of the dish and the pot that it is cooked in. The seafood version is packed with both fish and shellfish and cooked in a tomato sauce with lots of onion and peppers.

Pairing this dish with a port and tonic, a classic cocktail in Portugal, made this their favorite cooking class while traveling.

Although neither Kate nor Alec had taken a cooking class at The Chopping Block before enrolling in Culinary Boot Camp, they knew it was the right class for them to take together. Both say their cooking skills are much more advanced now, and that the class has ignited an excitement about cooking for both of them.

Alec says his biggest takeaways from the five-day intensive class designed to emulate professional culinary school are a big improvement in his knife skills, understanding the importance of seasoning and becoming more comfortable in using high heat (with the right high smoke point oil) in the kitchen.

For Kate, it's a better understanding of how ingredients go together and which cookware and which oils to use to get the job done. She's also mastered techniques she would have never tried on her own before, such as poaching fish.

"On the final day, we cooked live lobster. It was so cool to be able to have that experience hands-on. Before this class, I would have looked at a video on YouTube on how to cook lobster but in the class, we had a chef available to answer all of our questions as we went through the process. Now we are confident in buying a whole beef tenderloin, whole chickens and whole fish, and we know how to portion and prepare them properly. These techniques have really opened up a lot of options for us," said Kate.

They both say they'll always remember Executive Chef Lisa Counts' mantra: "Always be tasting." If you've taken a class with Lisa, whether in-person or virtually, you've likely heard this before!

Alec loves the fact that since graduating from Culinary Boot Camp, he longer feels like cooking is a chore. He describes it as a huge part of their relationship, and they often put on some good music, open a bottle of wine and make something delicious for dinner together. "We love spending time in the kitchen together, and we both love to eat great food," said Alec.

The couple has been busy recreating the recipes and techniques they learned in boot camp. Alec loves preparing emulsions like sauces which has elevated their cooking, and they are big fans of the spatchcock technique for cooking chicken. They are eating take out a lot less these days thanks to their new skills!

The Couple Who Cooks Together Stays Together

Both Kate and Alec say they would 100% recommend that couples take Culinary Boot Camp together. "It's such a fun way to connect outside of daily responsibilities. You get to do the best parts of cooking, not the worst part which is the cleaning up. The ingredients are there for you, you can ask questions the entire time, there's no fear you will mess up, you get to work in a great kitchen and you learn how to make recipes that are challenging yet fun," said Kate. "It's a stress-free environment!"

Alec adds that cooking helps a couple understand how to work together better. "A lot of the skills involved in cooking go beyond learning how to chop or season properly. It involves skills like communication and teamwork. Doing the class as a couple can help you strengthen your relationship because it gets you working together. For some people, cooking might cause strife at home because it’s viewed as a chore, but for us, it's a fun thing that we get to do together," said Alec.

Alec's grandparents say "The couple who cooks together, stays together." They've been married for 60 years and even today, they cook together every day. His grandmother got his grandfather to love cooking, just as Kate has done for him.

We wish you a lifetime of happiness together, Alec and Kate!