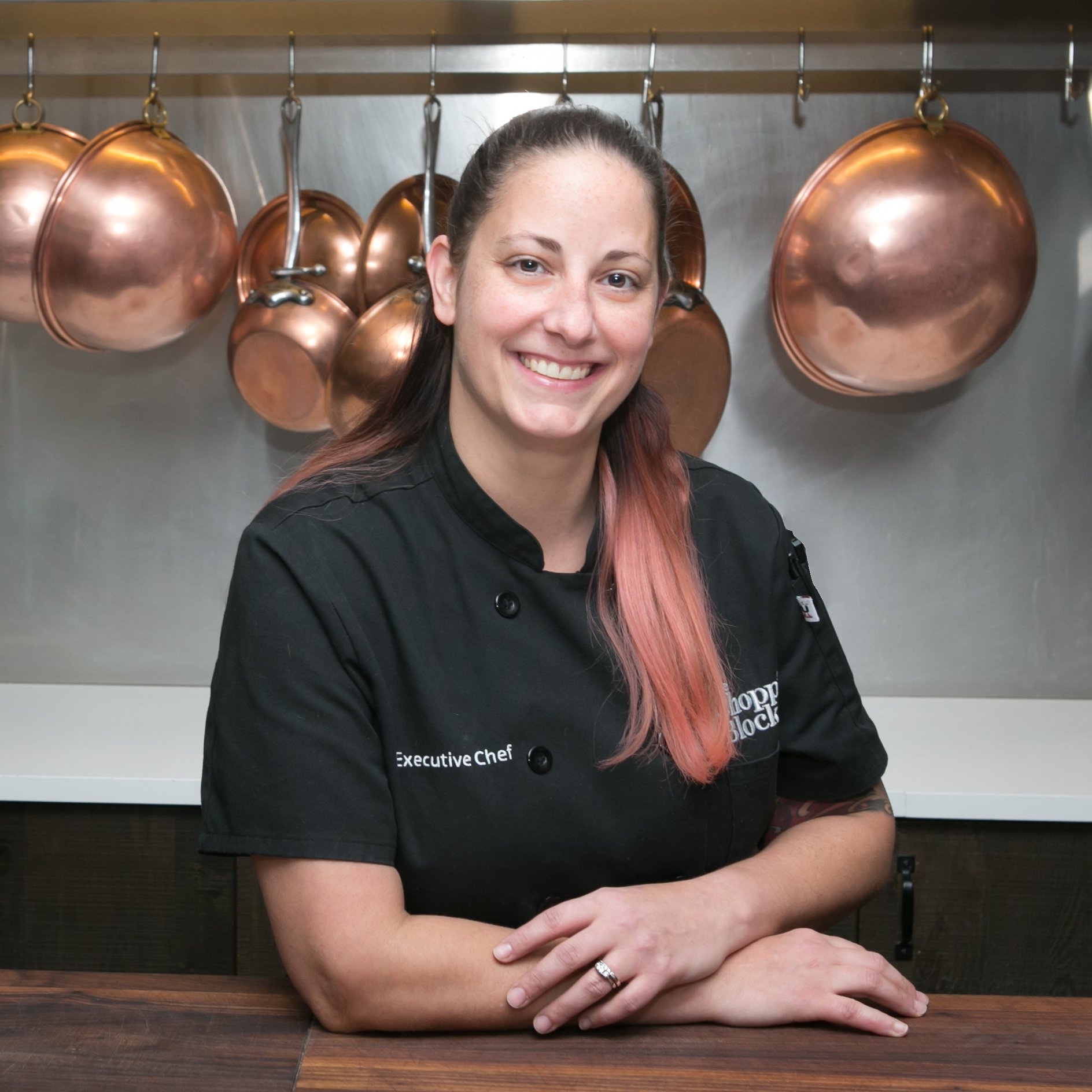 What is the first thing that you think of when you hear the term “dumpling?” Over the course of thousands of years there have been many talks as to what constitutes a food item to be considered a dumpling. The very word has so many different definitions depending on where you find yourself in the world.

Wikipedia defines dumpling as a broad classification for a dish that consists of pieces of dough wrapped around a filling or pieces of dough with no filling. The dough can be based on bread, flour or potatoes, and may be filled with meat, fish, cheese, vegetables, fruits or sweets. They can be steamed, baked, fried or boiled in liquid according to the dictionary. So, with this wide scope of a description it is no wonder why there has been so much controversy as to what is or isn’t considered a dumpling. By these definitions In Italy, ravioli or gnocchi can be considered dumplings. In Asia: bao, pot stickers, or crab Rangoon. In Poland, pierogi could be a dumpling or in England, chicken and dumplings made with just flour and water were one of the very first food items of this name. No matter how you define it, a dumpling by any other name will still taste sweet to me. 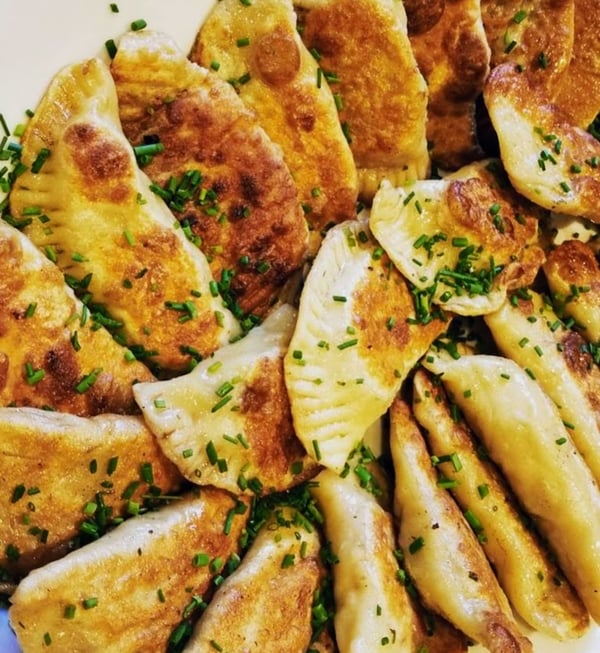 What I love about dumplings is the creativity and variations they allow in the kitchen. If you have some produce or meat that you simply don’t know what to do with it, cook it and wrap it in a dough. I am over simplifying here but why should making delicious food have to be complicated? Or commit to any one definition? Whether you consider it a dumpling or not, let me break it down into categories and options to contemplate the next time you want to make your own version of a dumpling.

Doughs: Pie, phyllo, puff pastry, wonton or gyoza wrappers, yeast dough, and potato dough are some of the most popular choices. Different flours, fats, and liquids can be used when making dough from scratch but even store-bought dough can work in a pinch. Each of these doughs lend themselves to a certain kind of cooking method.

Fillings: Ground meat either cooked or raw, shredded braised or smoked proteins, vegetables of any kind, cheeses, fruit or sweet fillings can be used inside your dough of choice.

Cooking methods: Deep frying, steaming, boiling, baking, or even a combination of pan sautéed and steamed are viable options of cooking the dumplings and these methods depend on the texture you desire or type of dough used.

I made three different types of dumplings that utilize different doughs, fillings and cooking methods to demonstrate how diverse the world of dumplings is, and I am going to share all these wonderful recipes with you!

Let’s skip straight to dessert and talk about sweet dumplings first. Everyone has had or has heard of an apple dumpling in their lifetime - it's a pastry or biscuit crust with apple baked inside. But have you ever had a plum dumpling? These are really popular in Europe. The dough is a sweetened potato dough wrapped around a pitted plum that are then boiled and coated in cinnamon sugar breadcrumbs. If you are looking for something not too sweet, has amazing texture and flavor, this is the treat for you. Some other fruits that work great in dumplings are bananas, mango, pears and other stone fruits. 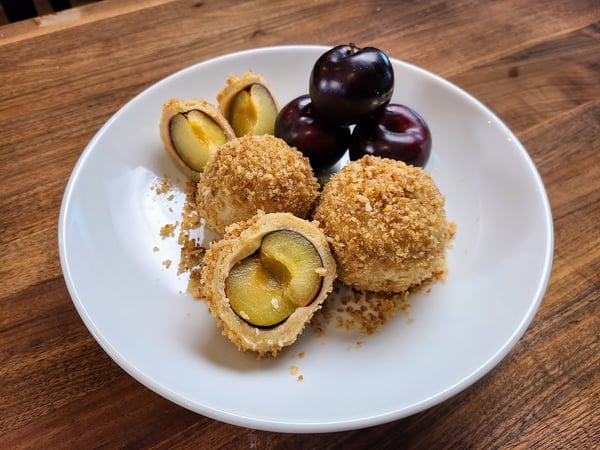 1. Pre-heat oven to 400 degrees and roast the potatoes until knife tender, about 45 minutes

2. Cool the potatoes completely. Once cooled, force potatoes through a potato press. 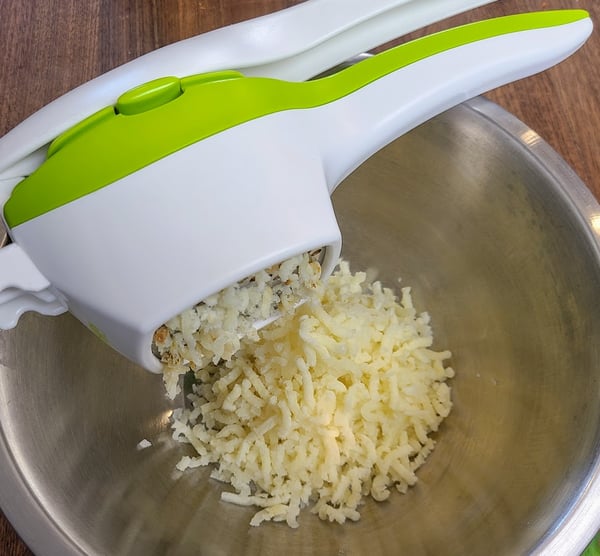 3. Add butter, flour, egg, sour cream and salt and cinnamon. Knead well until a smooth dough emerges, being careful not to overwork the potato dough. 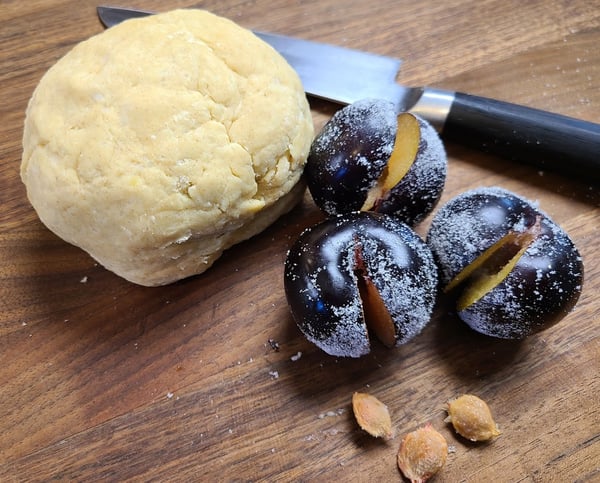 4. Form the dough into 5-6 even pieces, depending on how many plums you are using. Flatten each dough ball and wrap it around a pitted plum. 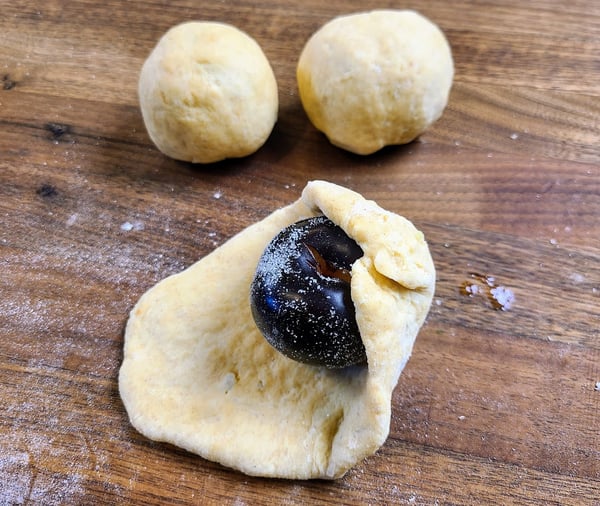 5. Drop dumplings in a pot of boiling water and wait for them to float. Once they float, cook for another 5 minutes.

6. While the dumplings are cooking, melt the butter and toast the breadcrumbs in a pan with 1 tablespoon of butter. When the crumbs turn an even golden brown throughout, turn off the heat and add the sugar and cinnamon. Stir to combine.

7. Remove the dumplings from the water, coat with the remaining melted butter and roll in toasted breadcrumbs.

This potato dough is very much just a sweetened version of another dumpling popular in Europe that does not contain a filling: the notorious gnocchi. I am unfortunately not going to go into detail about this other famous dumpling (see picture for reference) but if you ever wanted to learn how to make them, we offer a different gnocchi class every month virtually. The next gnocchi class is on October 18th. I had extra dough after wrapping my plums so I boiled off some gnocchi and I think I’m now hooked on sweet gnocchi over savory! 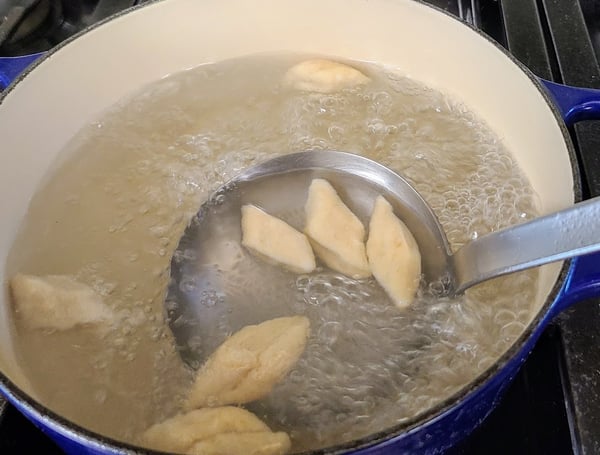 The next dumpling recipe I am going to share with you is the samosa most commonly found in India. This dough is a basic flour and water dough but the addition of ghee makes it more flavorful. This is then wrapped around a heavily spiced potato and pea filling. See what I did there; from potato dough to potato filling the dumpling combination possibilities are endless. This dumpling is often deep fried to achieve maximum crispiness but can also be baked. 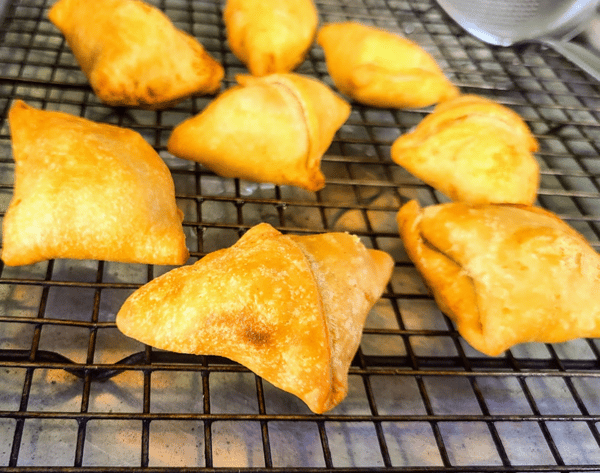 Vegetable or canola oil for deep-frying the samosas

1. Place the potato in a saucepan and cover with cold water. Bring the water to a boil and reduce to a simmer. Cook until the potato is knife tender, 20 to 25 minutes. Drain the potato and allow to cool. Once cool enough to handle, remove the skin. Alternatively, you can bake the potatoes at 375° until knife tender.

2. Prepare the dough for the samosas in a large bowl by combining the flour, 2 tablespoons melted ghee and salt. Add the water gradually, using enough to make a workable dough. Knead until smooth. Roll into a ball and cover with plastic wrap. Allow to rest for about 20 minutes while preparing the filling. 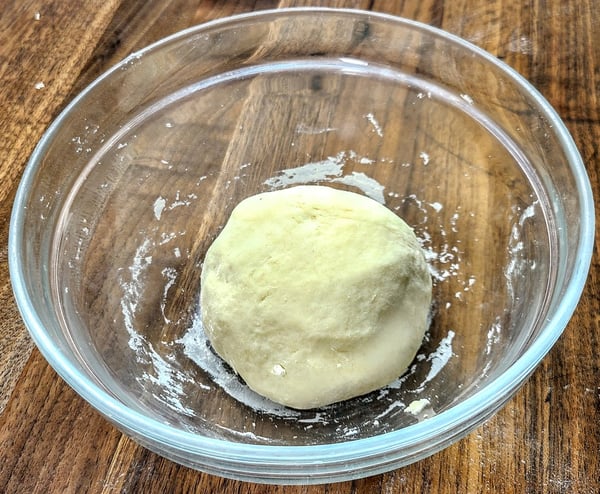 3. In a medium-size bowl, mash or rice the potato. (see picture in recipe above)

4. Heat a large sauté pan over medium heat, and add the ghee. Add the cumin seeds and mustard seeds. When the seeds start to pop, add the fennel, cayenne, garam masala and ginger, and sauté for 10 seconds. Remove from the heat. 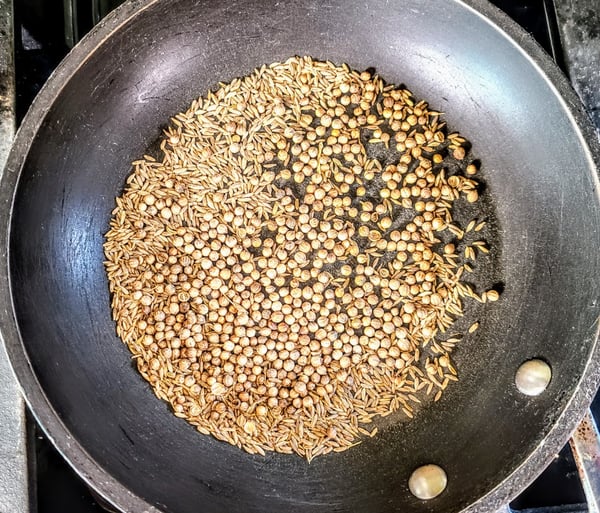 5. Stir in the mashed potato, cilantro, lemon juice and green peas and mix well. Season with salt to taste.

6 Heat the oil in a large, heavy pot until it reads 375° on a deep-fry thermometer. 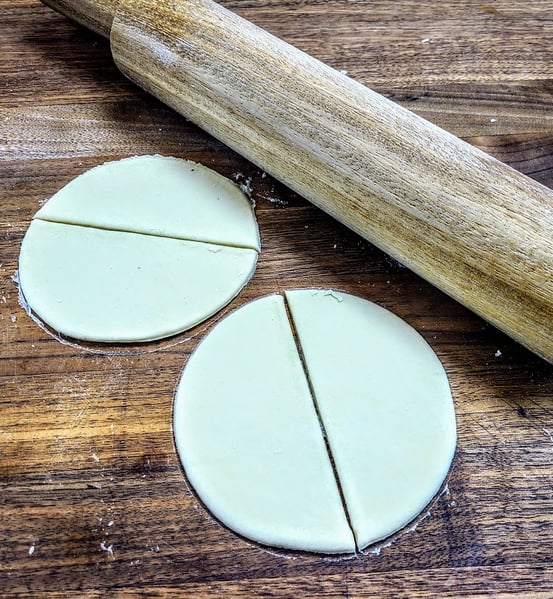 8. Stuffing the samosas: Dip your index finger into cold water and apply it to the straight edge of a semicircle. Fold the straight edge in half, bringing together the watered edges. Pinch to seal. You should now have a small cone-shaped pocket. 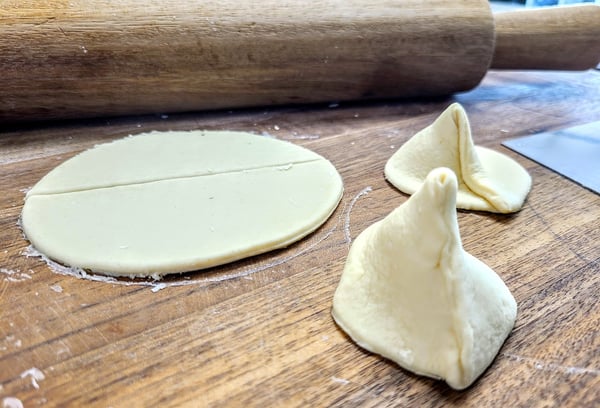 9. Hold the cone of dough in your hand, and stuff it with about 1/4 cup of the potato mixture. Now water-seal the upper edges. Repeat for the rest of the dough. 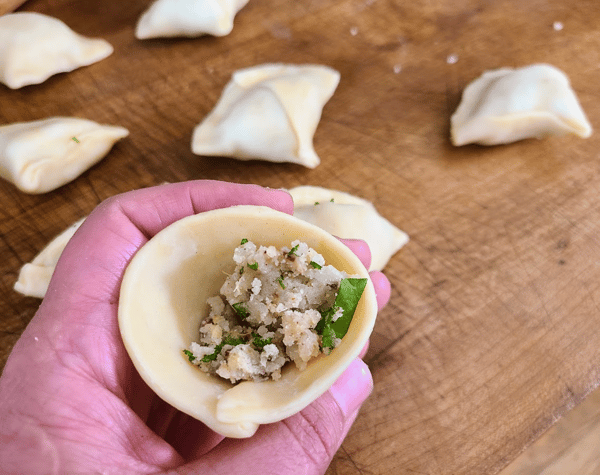 10. Deep fry the samosas in batches until golden brown, and drain on a rack set over a sheet tray. 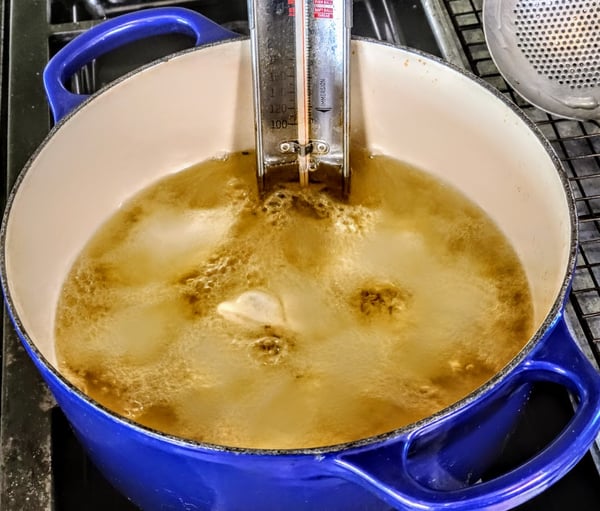 Bao buns are the last dumpling recipe I am going to provide you with. These are a yeasted dough that needs to rise before being filled with a cooked meat mixture that are then steamed. This filling is a flavorful meat mixture that when cooked before filling it is great for dumplings that you want more of a loose texture but can also be mixed raw and used as a filling for a more homogeneous texture like in pot stickers. Yet another dumpling that I will not go into detail about here but if you wanted to learn how to make them you should check out our class being offered virtually on Friday, October 16th! 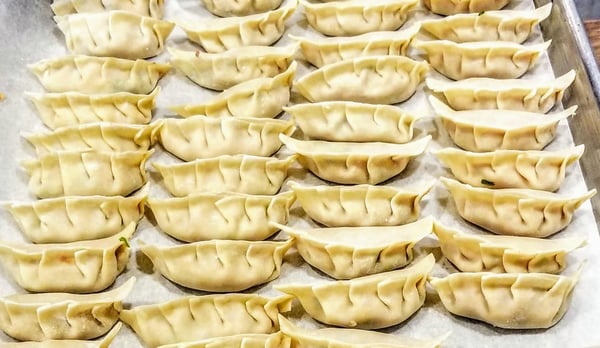 ½ pound ground pork or any other ground protein

6 dried shiitake mushrooms covered with hot water until soft, and then finely chopped

4 scallions, thinly sliced on the bias

1. To prepare the dough, mix together the yeast, warm water and sugar in a large bowl. Allow to sit for 5 to 10 minutes until the yeast begins to foam up, to ensure that it’s alive. 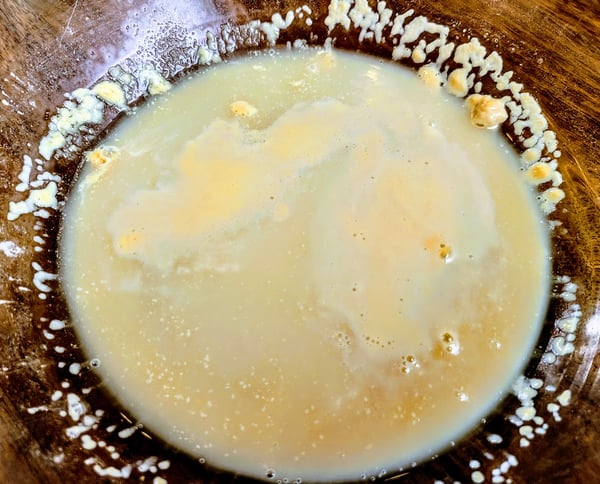 2. Add the flour, baking powder and shortening and mix with a wooden spoon until well combined.

3. Turn the dough out onto a floured surface and knead until it is smooth and elastic, 5 to 6 minutes.

4. Transfer the dough to a bowl and cover with plastic wrap. Allow to rise until doubled in size, about 1 1/2 hours. 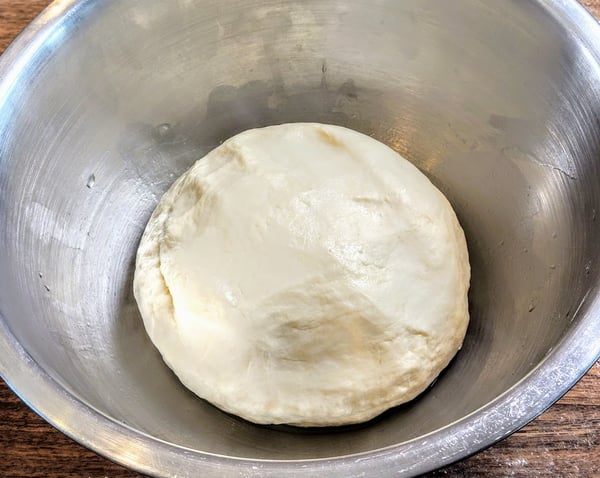 5. While the dough is rising, prepare the filling. Heat a sauté pan over medium heat and add the grapeseed oil. Add the ground pork and sauté, breaking it up with a spoon until cooked through. Add the ginger and cook until aromatic, about 1 minute.

6. Stir in the chopped mushrooms, bamboo shoots, grated carrots, scallions, oyster sauce, soy sauce, sesame oil, salt and cornstarch mixture. Bring to a boil, and stir until the sauce thickens. Transfer the filling to a bowl and allow to cool.

7. Once the dough has risen, remove it from the bowl and divide into sixteen equal-size pieces. Roll each piece into a ball. 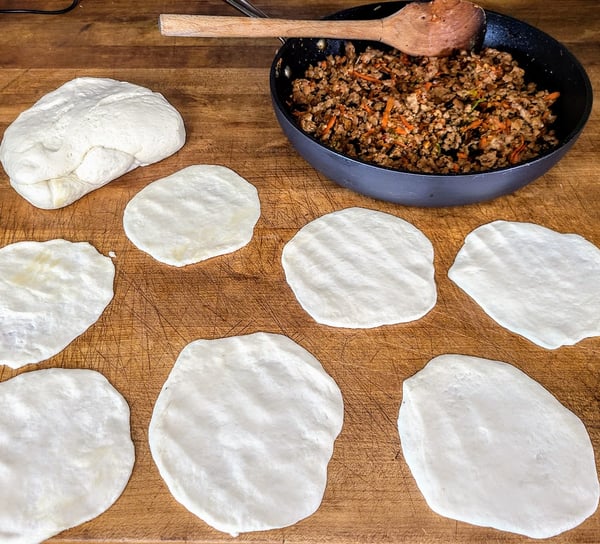 8. To assemble the bao, place a ball of dough in the palm of one hand. With the thumb of your other hand make a well in the center. Fill the well with about 1 tablespoon of the filling. Seal by gathering the edges together and twisting them closed. (I experimented with different closure options, be creative here!)

9. Place the buns, seam side down, on the squares of parchment. Use scissors or a sharp paring knife to make a 1/2-inch-deep X-shape incision in the top of each bun. Keep the finished buns covered with a damp towel.

10. Fill a wok or medium-size pot of water with 3 to 4 inches of water and bring to a boil. Set a bamboo steamer over the pot, ensuring that it’s not touching the water. Working in batches, arrange the buns on their parchment squares in the steamer and cover. 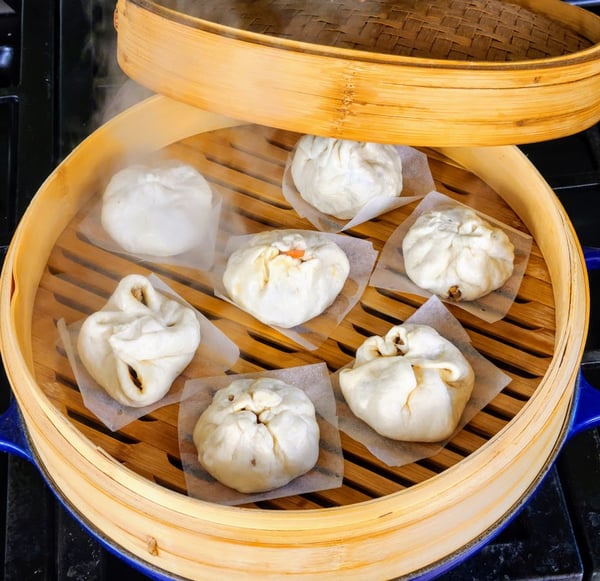 11. Steam the buns until they are puffed, 12 to 15 minutes. Add more hot water to the pot as necessary. 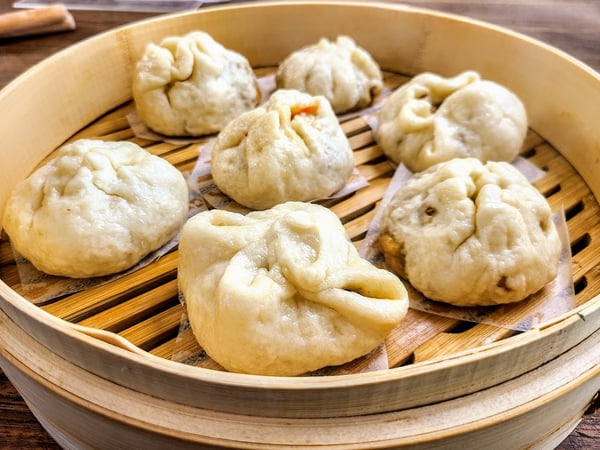 12. Place the buns on a platter, and serve warm or room temperature with hoisin sauce.

I hope these dumpling recipes with different doughs, fillings and cooking methods inspire you. I challenge you to make a dumpling of your own using the foundations I provided as a template to take the concept of a dumpling and run with it. I want to see you take these recipes and ideas and make them into your own for our private Facebook group's weekly cooking challenge on dumplings this week. 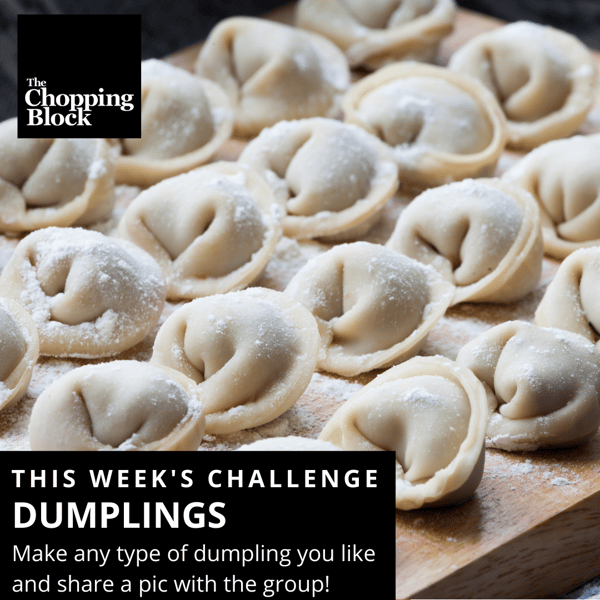 I can’t wait to see your beautiful creations and hear the great debates on what you think is or isn’t a dumpling! I will start the conversation: is an empanada a dumpling? There is much dispute on this topic alone.  I would love to hear your thoughts so find me on in our private Facebook group to hash it out. If I am lucky maybe I will see you in our virtual Pot Stickers or Gnocchi classes! 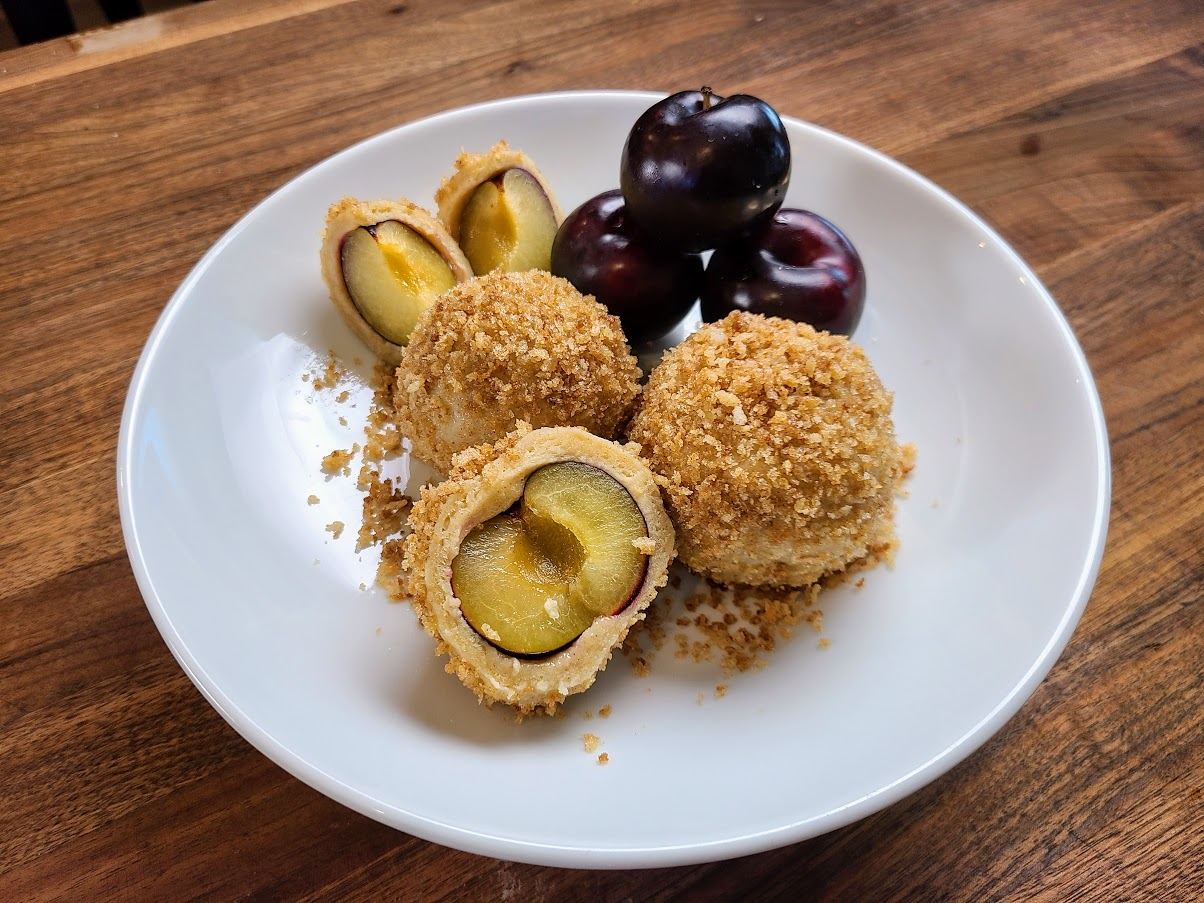 For the dough
For the topping