How to Throw a Paella Dinner Party

One of my favorite meals to prepare for an intimate dinner party is paella.

Paella is one of those one-pan meals that, if done correctly, is something truly outstanding. I usually serve a few tapas, maybe a chilled gazpacho and a simple salad before I dish out the Paella. I also like to make a couple of different types of paella. Usually one will have only seafood and another will be made with both seafood and a variety of meats. I’m an equal opportunity cook! 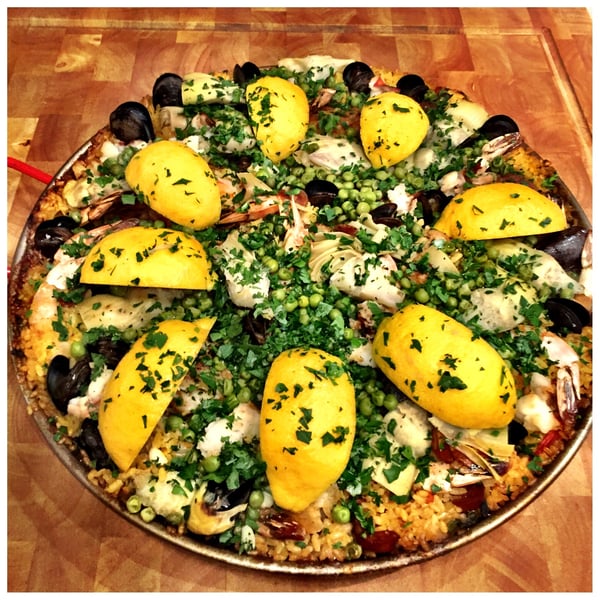 I always start by making a rich and flavorful seafood or chicken stock. The ingredients for the paella might include several types of proteins: seafood, shellfish, Spanish chorizo, chunks of pork and chicken. I also include veggies, white wine, saffron and of course, the perfect rice to use when making paella: Bomba rice. I discovered Bomba rice a couple of years ago and it has become my go to rice. It’s not very easy to find, so as a substitute you can always rely on Valencia rice or Arborio rice. You just want to make sure that you’re using a short grain rice.

You also don’t want to omit the saffron. It is used as a seasoning and coloring agent in paella and other foods. The stigmas or threads from the purple crocus flower, are picked by hand, collected and dried, which is one of the reasons why Saffron is considered one of the most expensive spices available. A pound of saffron could cost upwards of $1,500. But take heart in knowing that when making paella you’re not going to need anywhere near that amount. You’re just going to need a few threads of the spice, which you can purchase by the gram for an average price of $7.

Paella is one of those dishes that can turn into one of the most satisfying, impressive and complex meals you’ve created or it can  go horribly wrong! And by wrong, I mean a paella that has either overcooked or undercooked rice, with underseasoned and dry seafood or proteins. Good paella has several components that create several layers of flavor, making each and every flavor very distinct from the other. You don’t want to skimp on the ingredients and you want to give it the time and love it deserves. I can promise that if you do so, you’re going to have one outstanding pan of food.

Speaking of pan, let's talk about the best pan for making paella. In order to cook authentic, family-style paella, you need traditional Spanish paella pan. The best paella pans are shallow for the most efficient way of evaporating liquids. It should have sloped sides, which increases the surface area for cooking. When selecting a paella pan you’d want to buy one that’s made from carbon steel, thick aluminum or enameled cast iron. It should have a wide flat cooking surface with shallow sides that helps in the formation of something called “soccarat”, which is the caramelized rice crust that develops on the bottom of the pan. In Spain this is what usually comes to mind when having paella and what most Spaniards look forward to eating.

My very first paella pan was made of carbon steel and was given to me years ago by a very dear friend as a Christmas gift. Back then I would follow Julia Child’s paella recipe to the letter using that pan. But I lost the pan in one of my apartment moves. It still pains me to no end that I lost that pan with the years and years of heavily seasoned Paella goodness that was embedded in it.

I’ve since purchased two more paella pans. The first one I purchased was one from a housewares store that specializes in high-end cookware and furnishings. It has a non-stick coating, which is something that I didn’t expect in a paella pan. It’s made of thick non-stick aluminum with multiple layers of non-stick coating. It’s very heavy in feel and also has the sloped sides and the wide flat cooking surface that traditional paella pans are known for. This pan has and still serves me very well when I have a paella party. 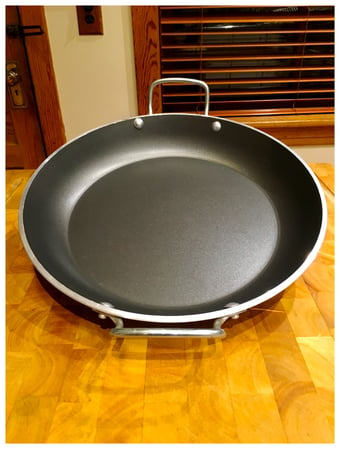 The second is the very traditional paella pan I mentioned earlier. This is by far my favorite to use! It is tremendous at helping me achieve the caramelized and crusty soccarat that gathers on the bottom of the pan. 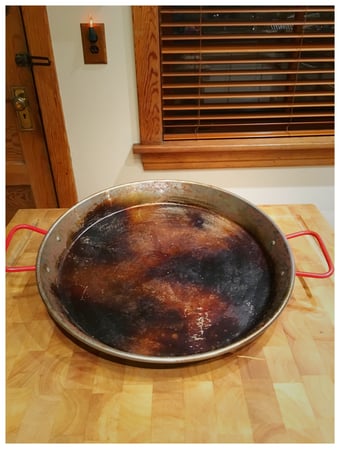 We offer several cooking classes at The Chopping Block where paella recipes are featured as a main course. One of those classes is called Tapas Party. Not only do we teach our students how to make several tasty tapas, we also teach students how to make a tasty and hearty paella dish. When we make paella, we use a Le Creuset pan that is made of heat-retaining cast iron with a enamel interior that aids in the development of the soccarat. We love using these pans because of its even heat distribution, heat retention and heavy, tight sealing lids.

Good paella can be accomplished by either making it on a burner on top of the stove or made inside the oven.

Now lets talk paella ingredients. You can create a substantial and satisfying paella from some of the simplest ingredients or go as elaborate as you’d like. As long as you include a decent and appropriate rice along with a bit of saffron, some white wine and a flavorful stock or broth, you’ll be halfway there.

Normally for my paella parties, I usually go pretty wild with the seafood and various meats that go inside it. I’ve been known to use lobster, clams, mussels, shrimp, halibut, chicken thighs or legs, Spanish chorizo and chunks of pork loin as my proteins. Other ingredients that are always present are garlic, onion, parsley, green peas, a bit of crushed tomato, strips of roasted red pepper, asparagus spears, quartered artichoke hearts, a good olive oil and, of course a bit of Spanish smoky paprika. 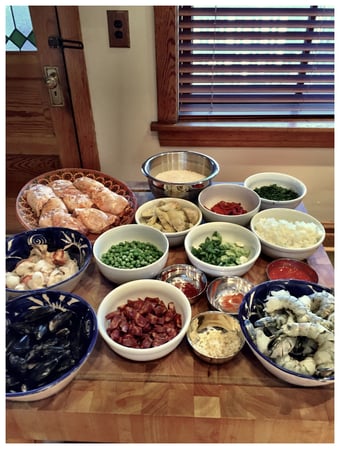 Here is a recipe that I recommend very highly and is the one we teach at The Chopping Block and is also featured in our private cooking events.

Time from start to finish to prepare 50-55 minutes

1 cup of Arborio rice, (bomba rice can be substituted)

Check out The Chopping Block's Owner/Chef Shelley Young's video demonstration on how to roast your own red peppers:

In this recipe, the LeCreuset paella pan with the tight fitting lid is being used. If using a traditional paella pan without a lid, cover tightly with aluminum foil before placing it in the oven. Be very careful when removing the foil in order to arrange the mussel, shrimp and peas on top of the rice.

Having friends over for a paella dinner party is enjoyable and satisfying because it provides my guests with a flavorful and beautifully stunning one-pot meal with an international flair like no other. Before digging into the paella, we start off the evening with a bottle of Cava, the sparkling wine of Spain, a couple of Spanish tapas and maybe a light salad or a bowl of chilled gazpacho. 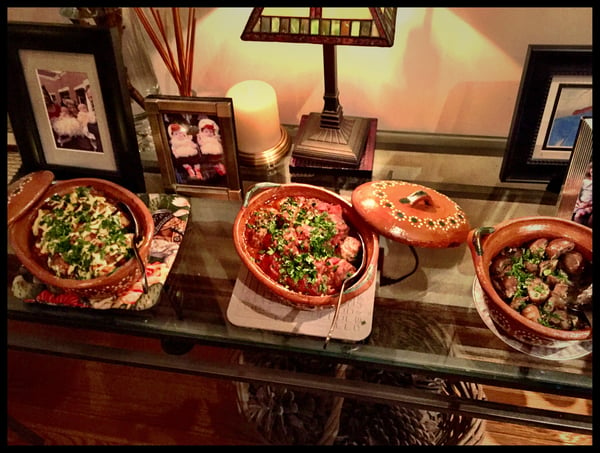 Variety of Tapas: Patatas Bravas, drizzled with a roasted red pepper aioli, Albondigas, in a tomato and smoky paprika sauce, and Garlic and Sherry Mushrooms. 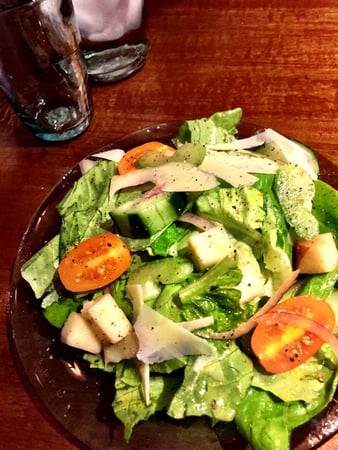 The only problem with having a paella dinner party is that once you’ve had one, your friends will always look forward to the next one and will ask often about when the next one will be! 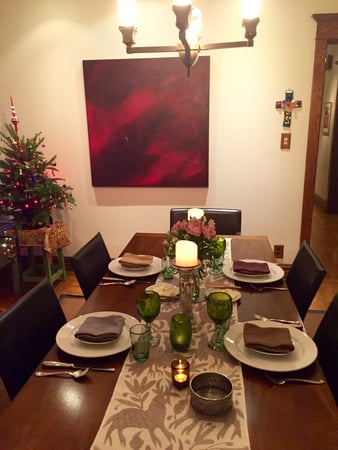 Join us for our next hands-on Tapas Party cooking class next month at Lincoln Square. We also have short demonstration classes coming up in March at our new retail store in the Merchandise Mart. Stop by for a sample and a taste for just $20!