Grits vs Polenta: A Match of Equal Deliciousness

When I broke in my new kitchen a few weeks ago with a dinner party for friends, the star of the show was my Asiago cheese grits with fresh herbs.  Just recently, my good friend Dan Smith of The Hearty Boys offered to make dinner in my kitchen for my birthday. Of course, I said yes… after all, the man is a culinary genius! His plan was to make a cheesy polenta as a bed for a braised pork shank with a cherry tomato ragout. His cheesy polenta ended up turning into cheesy grits, and no one could care less because the meal was sheer perfection.  But it got me thinking: what is the real difference between grits and polenta? 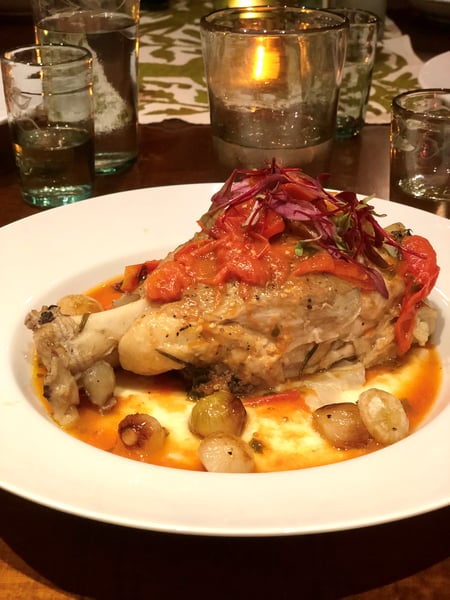 I decided to do some research on the difference, and soon realized that I might have bit off a bit more than I could chew.

First I must say, people’s opinions on the subject vary sharply! None more so than when the discussion turns to grits. People have very strong opinions on grits and what really constitutes a ‘grit’:

All of these answers varied tremendously, and the online conversations could sometimes become quite intense. Each person feeling that their way was the absolute correct and only way of eating grits. It seemed at times that the opinions could even possibly come to blows if the chance arose. Adding to the furor was also the fact that people either loved grits or hated them.

I’ve been a huge fan of grits practically my entire life. Growing up, they were always on the breakfast table. To this day, my favorite breakfast meal is a plate of grits, topped with butter and sugar, served alongside a couple of pork sausage patties, a piece of buttered toast cut on the diagonal and a couple of scrambled eggs. There’s nothing better!

Who knew that there were people out there who believed that the way I grew up eating grits was almost sacrilegious? Seems like my way of eating them was not how a true Southerner would eat them, only a Northerner would eat them that way. A true 'southerner' would only eat grits with maybe a bit of butter, some cheese, and most definitely with salt and pepper, a more savory approach than the way I was brought up eating them.  Being a ‘northerner’, I couldn’t very much disagree with their opinion except for the fact that both of my parents were from the South, as well as both sets of grandparents. It made me wonder what happened when they migrated from the South to the North that could possibly change their way of eating grits?

I don’t know why. What I do know is that grits are a very important comfort food for many people. Most people eat grits the same way they did as children. Grits are a comfort food that conjures up strong emotional feelings, including memories of home.

Now back to the big question: what is the real difference between grits and polenta?

They’re both made from corn, but there's a color difference. Is it that one is the staple of the American South or that the other comes from Italy?

That’s true for the most part, as both polenta and grits are made from stone ground cornmeal, which is dried corn that’s ground down into smaller coarse bits. But the main difference is the different types of corn that each is made from as well as how many times it’s been milled and the fineness of the grind. Polenta as depicted by its color is made from yellow corn, while grits are normally made from white corn (or hominy). Not only is the color affected from the type of corn, but so is the texture. Most grits in the South are traditionally made from a class of corn called, dent corn, whereas in Italy, most polenta is made from a class of corn called flint corn, or in Italy referred to as, otto file, which tends to hold its texture better. Because of the different types of corn, grits can come across as almost mushy, while polenta is coarser and more toothsome.

Polenta is not an ingredient - it’s a dish. The term “polenta” refers to the traditional Italian preparation of a variety of ground grains or starches cooked into a porridge. Buckwheat meal, chestnut flour, chickpea flour, or coarse ground rice are just a few of the many grains that were and still are used in Italy today that are referred to as “polenta”. But by far when you hear the word “polenta” the most common and well-known preparation, particularly in the United States, refers to the cornmeal version.

So, can you use cornmeal to make polenta? To a certain degree, the answer is yes. If the cornmeal that you’re using has a medium to coarse grind, you should be fine. Cornmeal with a finer grind is typically used for baking or as a breading. Choosing a product specifically designed for making polenta will produce the ideal dish.

Traditionally polenta is cooked in water. But it can also be made with stock or milk for added creaminess and flavor. Be sure to season well with salt. Toward the end of the cooking process, it’s common to stir in butter, or olive oil to the polenta. It’s also common to add a grated cheese, such as Parmesan. I like to add a combination of both Parmesan and Asiago. Sometimes I’ll even add a touch of Romano. And just recently, I added just the tiniest bit of Comte cheese and a couple of tablespoons of heavy cream. Talk about rich!

Polenta can be eaten plain as a creamy porridge, or it can be topped with any number of things. Typically, a ragout of pork, beef or mushrooms is the traditional topping of choice. Another great way to prepare polenta is to pour it into a lightly oiled casserole dish, refrigerate and chill for at least an hour, slice into squares and then pan fry them in a bit of olive oil. Lastly, just make sure not to rush the cooking process!

Grits possess a pretty mild flavor on their own but will take on the flavor of the cooking liquid used. They’re typically flavored with salt, butter and cheese during the cooking process. As I mentioned earlier, growing up I had only eaten grits primarily as a breakfast item. But as an adult I branched out into using it as a savory side dish for dinner, incorporating various cheeses as well as herbs. Shrimp and Grits is another very traditional way of eating them. This is a traditional dish from the coastal South Carolina and Georgia regions. Grits are also sometimes accompanied alongside fried catfish or salmon croquettes. Whichever way you choose to have them, make sure to never reach for a package that reads “instant’ or “quick cooking”.  If you’ve ever eaten grits that were mushy or slimy, that was probably the reason why. The same thing goes for polenta as well, and that also includes the already prepared polenta that is sold in the tube.

While I was thinking about grits and polenta so much, I had an idea for a polenta dish. I wanted to create a soft polenta and then on top of the polenta, place a ragout of some kind. There's nothing better than ragout from the Instant Pot. Here’s my adapted recipe for Instant Pot pork ragu with fresh herbs served on a bed of polenta with cheese. 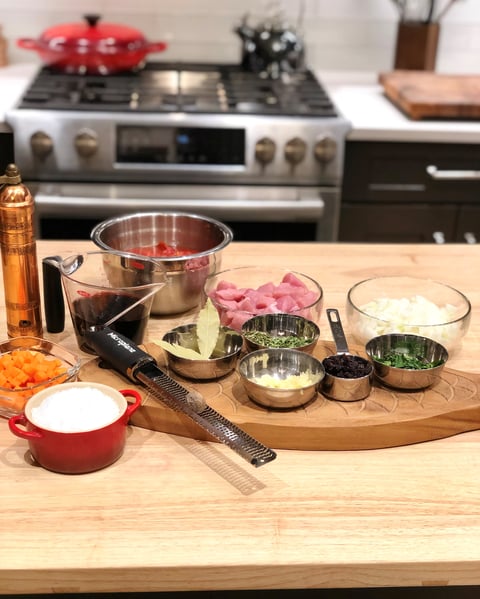 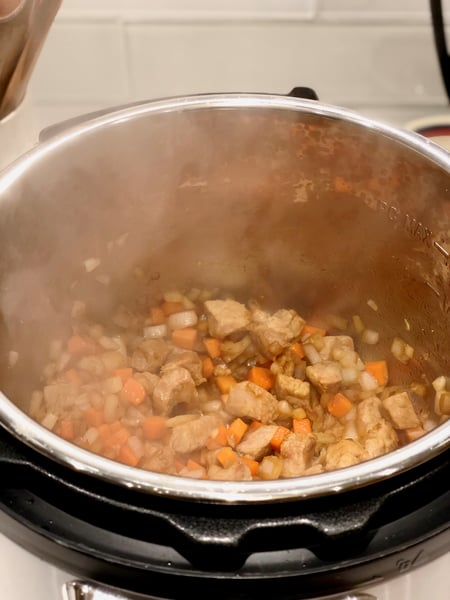 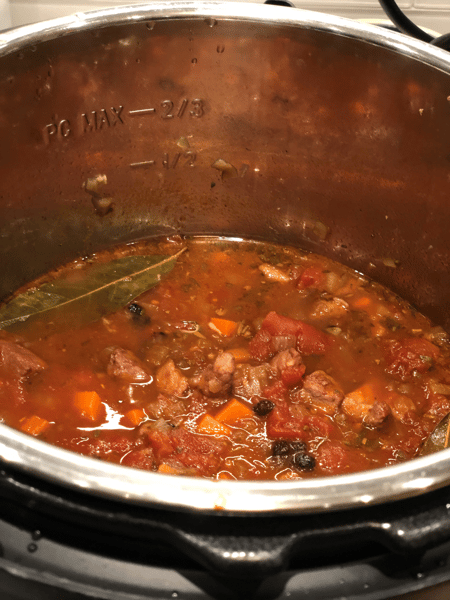 Polenta with Herbs and Cheese

To serve, place a scoop or a large spoonful of polenta on a plate, top with a scoop of ragu. Garnish with chopped parsley and fresh cracked pepper.

I served this dish alongside a simple salad of Bibb lettuce, grape tomatoes and thinly sliced red onions, tossed with a honey, herb, Dijon mustard vinaigrette.

Want to learn how to actually use your Instant Pot? Join us for a special class with the author of The Complete Indian Instant Pot Cookbook on Saturday, February 9 at 10am at Lincoln Square. Cookbook author and editor Chandra Ram will give you tips on making delicious Indian Food in yours.