Out with the Old and In with the New Kitchen

We bought our Arts and Crafts style two-flat building several years ago, and vanity keeps me from saying just how long ago that was. But let’s just say that “The Fresh Prince of Bel Air” was one of the top-rated TV shows at the time.

Shortly after purchasing the building, we gutted and rehabbed practically every room, including the kitchen. After “several” years with the same outdated kitchen, we finally decided to gut, renovate and update the kitchen again. It was a project that had been on our radar for several years, and I couldn’t wait to dive into the renovation. At least, so I thought!

We had just recently turned the old pantry into a working chef’s pantry, purchased and installed a new range, refrigerator and microwave/convection oven/range hood. So, we thought that we were pretty much there.

No surprise, the project was a bit costlier than we expected, as well as taking a few weeks longer than expected. For 8 weeks, our provisional kitchen consisted of a tiny microwave oven, a toaster, coffee maker, and an Instant Pot for hard boiled eggs. Eggs cooked in an Instant Pot are seriously the best. They come out perfect! 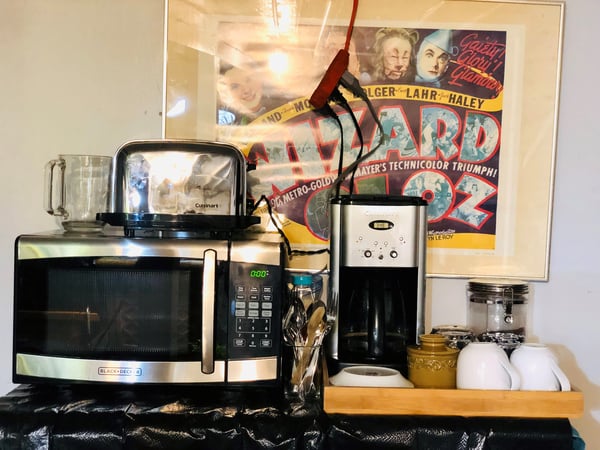 The renovation involved removing a small window and building a new wall section, which would give us more cabinet and counter space, installing new cabinetry, hardware, a quartz counter top, glass subway tile backsplash and new lights throughout (under cabinet lights, puck lights for a glass-front cabinet and a new ceiling light fixture as well as three new recessed can lights). A new dishwasher along with new counter top appliances were purchased. 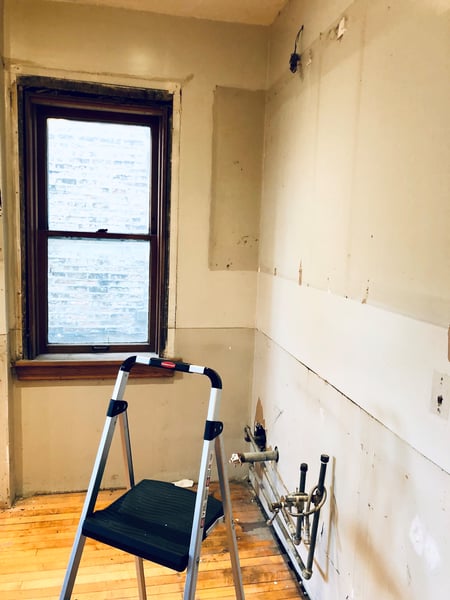 We also had a new kitchen island installed and placed in the center of the room. 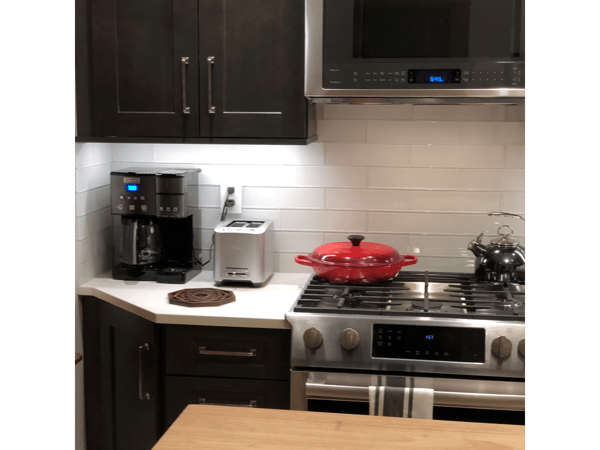 New oak hardwood molding was installed on windows and the wood floors were sanded, refinished and given several coats of polyurethane. The refinishing of the floors involved having to stay in a hotel overnight in order to avoid walking on the floors and all the smells from the freshly coated polyurethane on the floors. New plumbing and new electrical was installed, as well as a ventilation system to exhaust out all of the “sometimes” smoke I generate when I cook. 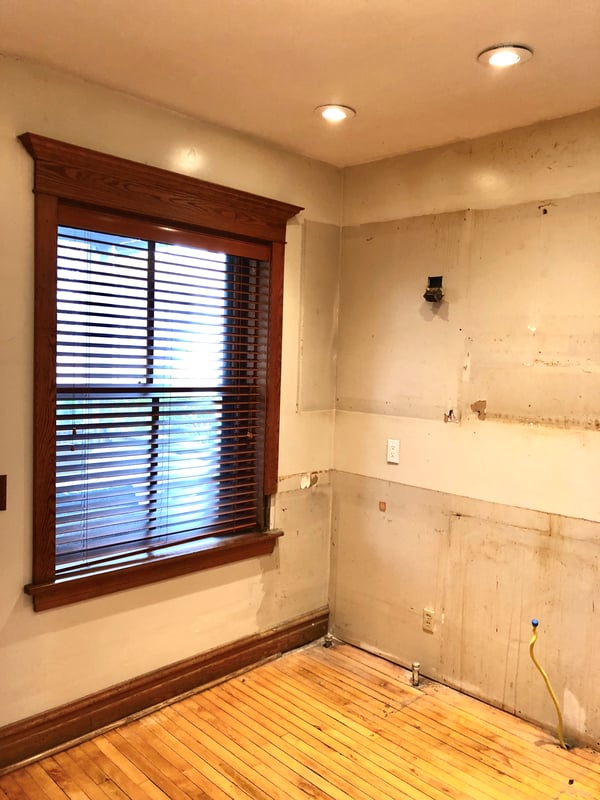 I have to say that my favorite item of the entire kitchen redo was placing the sink area into a corner cabinet with a deep brushed nickel stainless steel sink, the coolest faucet, drain basket and sink grid. I’ve gotten so many responses to that corner sink from people wanting to know if it’s worth it and if I enjoy it, which I absolutely do! 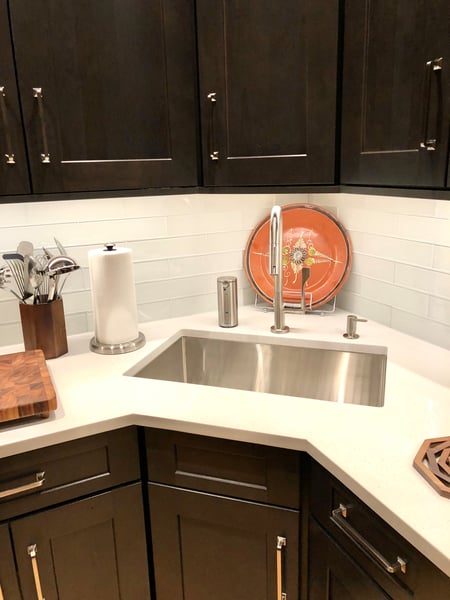 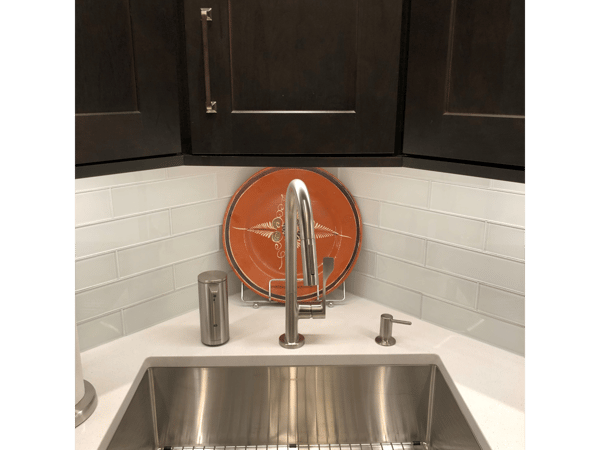 Now I can finally say that it’s done, and I have the chef’s kitchen I’ve always wanted to go along with my chef’s pantry. I was also very pleased with the 2 knives and knife stand that Chef Sam Goldbroch created for me and that are now gracing my new counter top. 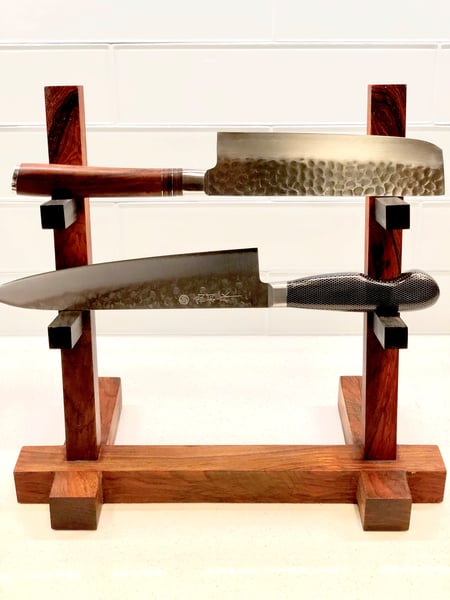 I’ve had several friends go through complete kitchen renovations and have always heard the horror stories it involved. And to be perfectly honest, there was a lot of drama that occurred with ours. Always be prepared, because there’s always a surprise that lurks behind every wall of an older vintage building. Contractors are also a constant source of surprise, especially with completion dates that seem to change just like the wind. But was it worth every stress-filled day of not having a kitchen and only cooking with a toaster and microwave. Of course, we ate out and got carry out on most nights and also spent many hours at kitchen supply stores or with our kitchen designer. So, was it worth it? The answer is a firm and resounding yes! 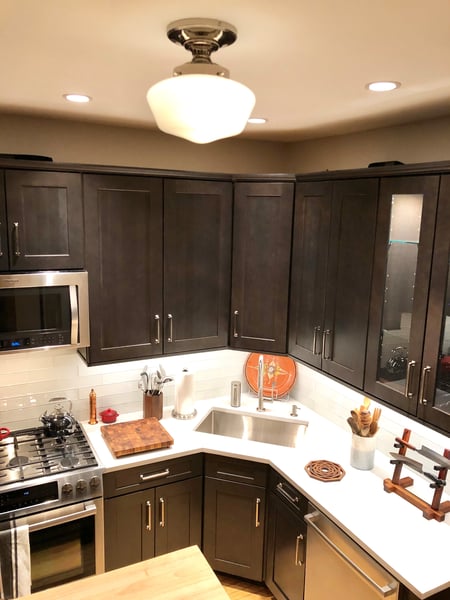 With a brand spanking new kitchen, you’d think that I couldn’t wait to try it out and cook a fantastic meal. I decided to take baby steps, lots of baby steps, before doing so. The first thing I cooked in the new kitchen was a pot of steel cut oats. The second thing I cooked was a small pot of roasted vegetable soup, but then I realized the smart thing to do was to really break in the kitchen by having a small dinner party.

I have two close friends who I tend to always test dinner ideas on so I thought they would be a perfect pair to have over for dinner to officially help inaugurate the kitchen.

I always experiment with creating a specialty cocktail that we can sip on while having appetizers. This cocktail was my take on a Pear Haymaker, which uses a fresh ginger simple syrup. I made that the night before. 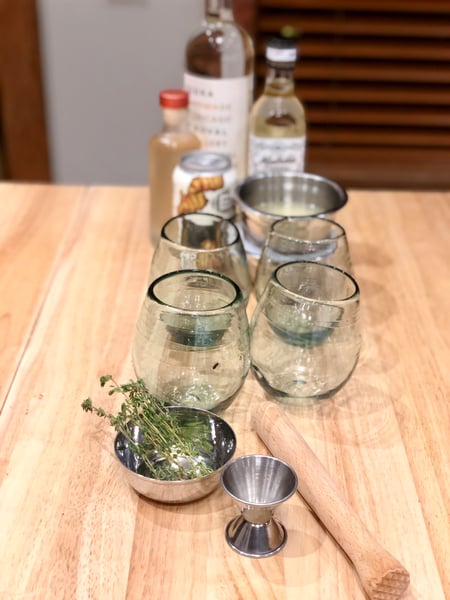 This recipe will make 2 cocktails so double if you need more.

For the ginger syrup

Combine sliced ginger, sugar and 1 cup of water in a small saucepan and bring to a boil over medium-high heat. Remove from heat and allow to cool to room temperature. Strain out ginger solids and discard, reserving syrup and keeping in an airtight container. I always make more and then strain into small tightly capped bottles, which I like to have on hand. The syrup can last for several months in the refrigerator.

Divide the chopped pear between two 12 oz. tall glasses; muddle the chopped pear in each glass with a wooden muddler. Pour 2 oz. vodka over the pears in each glass, and fill with ice.  Add 1 oz. ginger syrup, 1 oz. lemon juice, 1 oz. pear liqueur and 2-3 drops of bitters to each glass, stir to combine and finish with a float of ginger beer to top. Garnish with a sprig of fresh thyme and a strip of fresh lemon peel. Now sit back and enjoy the refreshment!

The appetizer I served was a wheel of baked brie, topped with a layer of ginger preserves, wrapped and baked in a sheet of puff pastry dough, until golden brown. I served it alongside crackers, slices of baguette, dried fruits, grapes and sliced apple.

Our friends are pescatarians and only eat seafood and vegetables. The entrée was lightly seared halibut filets on a bed of white grits with Asiago cheese, fresh herbs, scallions and a tiny bit of heavy cream. On top of the grits were torn and sliced collard greens, braised in white wine, balsamic vinegar, with caramelized shallots and garnished with chopped toasted hazelnuts and a drizzle of extra virgin olive oil. This was the perfect entrée to break in my new kitchen! The greens and the grits could be prepared ahead of time and reheated right before serving, while the fish was being seared. 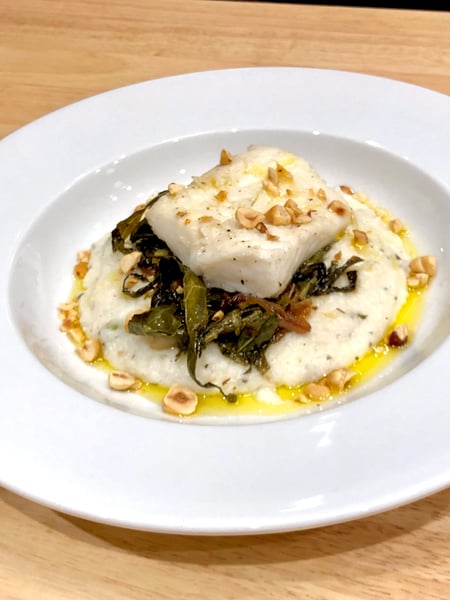 For dessert, I wanted something chocolate-y and rich, so I went with a Chocolate Irish Whiskey cake. I topped the slices with a dollop of “fluthered” cream, (chilled heavy cream whipped with Irish Whiskey and confectioners’ sugar).

This recipe yields 8-10 servings and is made in a 10-inch springform pan.

12 tablespoons unsalted butter, cut into 1-inch pieces and a bit more for greasing the pan.

¾ cup of unsweetened cocoa powder, plus 2 tablespoons for dusting the pan. (I really like Schaffenberger brand cocoa powder)

Place all the ingredients in the bowl of a stand mixer with a whisk attachment or in a large bowl, using a handheld mixer with beaters.  Whip on low speed to begin with and increase to high speed until medium peaks form, about 1 minute.  Serve slices of cake with “fluthered” cream.

To make the cake: 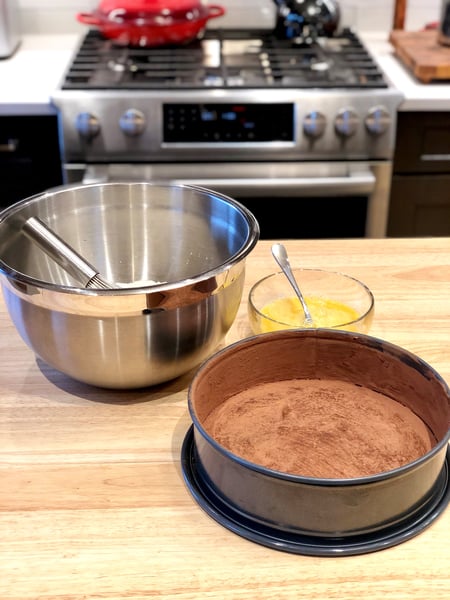 2. In a medium saucepan over low heat, warm coffee, Irish Whiskey, 12 tablespoons butter and remaining cocoa powder, whisking occasionally, until butter is melted. Whisk in both sugars until completely dissolved. Remove from the heat and cool completely.

4. Pour batter into prepared springform pan. Transfer to center oven rack and bake until a toothpick inserted in the center of the cake emerges clean, between 55 to 65 minutes, rotating the pan halfway during the baking time. Once the cake has fully baked and a toothpick comes out clean, let cake cool on a wire rack for 15 minutes, then remove sides of pan. Gently remove cake using a large, heavy spatula to a cake platter and dust with powdered sugar if you like. 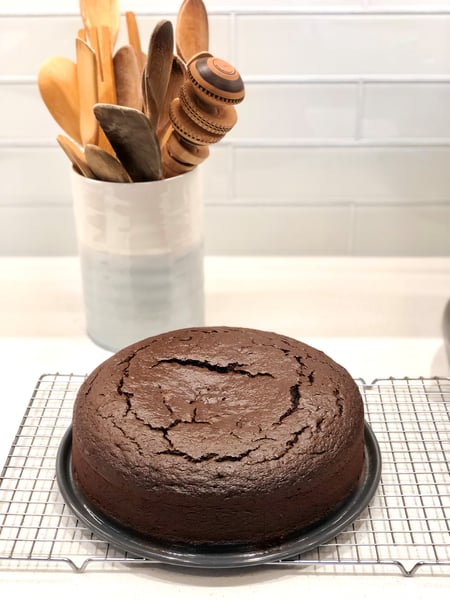 This cake was the perfect ending to the most perfect dinner to inaugurate and celebrate the new kitchen. It did have a few cracks, which I think was contributed to the amount of chocolate in the cake, but I think the cracks added a lot of rustic character and charm to the cake.

What’s more important is that I finally broke in the kitchen, didn’t stress out about it getting dirty and it losing its newness. Everything came out as planned and my friends were very happy. Plus, they got to take home lots of leftover cake!

I’m enjoying this whole brand-new kitchen thing. It seems to be working out! Have you ever gone through a kitchen renovation? Let me know how it went in the comments.

If you'd rather cook in a kitchen that isn't yours where someone else does the dishes, check out an upcoming hands-on class at The Chopping Block.