I’m a huge fan of soups and stews! Whenever I go to a restaurant, if there is a soup on the menu, I’m more than likely going to order it. I love that a bowl of soup can either be the starter to a meal or the entire meal itself, depending on its ingredients and size of the bowl. However, a stew is always a meal!

Put a bowl of French Onion Soup in front of me, and I’m immediately transported to my very first restaurant job. The chef would prepare a "family dinner" for employees before the start of service. On certain days or certain occasions, we could order anything off the menu, within reason, of course. The French Onion Soup was made with the most luscious beef broth, and contained caramelized onions, fresh thyme and brandy. It would be ladled into a porcelain ceramic crock, topped with a thick slice of toasted bread and shredded Gruyere cheese that would then be melted to perfection. Given the opportunity, it was usually my go-to meal before my shift would start.

When I was a kid, my grandmother made a combination of a soup and stew. It’s what I now refer to as “my grandmother's everything but the kitchen sink stew”! She would take leftover meats or cheap cuts of meat along with items from the refrigerator’s veggie bin that probably had only a few days left before they would no longer be usable. She would include beans of every kind, potatoes, tomatoes and water or stock. She would cook that all day long, ladle it into a bowl and with a couple of slices of bread and butter, it became one of my most memorable meals as a child. Now as an adult, I get the biggest kick out of making what I call my garbage- stews, -pastas, -frittatas and -soups. Usually those dishes are made from a collection of leftover items that have been gathering in the fridge and that I finally decide to create a spur of the moment meal with.

When I was in culinary school, my favorite class was Soups and Sauces. We learned so much about the complexities and at the same time, the simplicity of a great bowl of soup. The chef who taught the class was probably one of the toughest instructors that I had, but I appreciated that. We would walk up to the chef to present whatever soup or sauce we prepared that day to be graded. I would watch patiently as she tasted my soup, waiting for her feedback. I would be ecstatic if the feedback was positive. But even those times when it wasn’t, I didn’t mind because it would give me the drive to redo it and turn it into the soup that would not only please my instructor, but please me as well. You always knew that your soup or sauce was a good one if she didn’t mention being able to taste the white pepper on the back of her throat. My goal was to never have her make that scratchy throat noise that indicated that I had added too much white pepper.

A soup is primarily a liquid food, that is generally served cold, warm or hot. It normally contains ingredients such as meat and vegetables with a stock, juice, water or another liquid. On the other hand, a stew is a dish consisting usually of a meat or fish and vegetables cooked slowly in a small amount of liquid and served in the gravy that is made from it. The small amount of liquid that the stew is cooked in is the thing that differentiates it from a soup.

I’m always perusing and researching recipes. Sometimes they’re for this blog, but most times it’s just to try out something new or to make an improvement on a dish I’ve already made. I recently stumbled upon a recipe for West African Chicken Stew with Collard Greens and Peanuts from Chef Virginia Willis on The Southern Kitchen. I was immediately intrigued by the stews’ origin and ingredients.

Enslaved Africans introduced peanut stew to the South. An expert on the food and food ways of Africans dispersed from their original homeland is Dr. Jessica B. Harris. She is the author of 12 acclaimed cookbooks documenting the food and culture of Africa in the Americas. A list of potential ingredients in this hearty stew can extend to okra, tomatoes, hot peppers, and ginger, but it’s the peanut that gives this dish its earthy characteristics.

The recipe for this stew produced one of the most perfect meals!  It was so rich in its complexities of ingredients and flavors. After making it twice now, I’ve thought of ways how this stew can be made strictly vegetarian by just omitting the chicken thighs and substituting vegetable stock or broth in the place of chicken stock or broth. I also think this stew would be delicious made with a firm fish in place of the chicken thighs. You could also make it healthier by using chicken breasts instead of thighs.

Here’s the recipe for a stew that is definitely worthy of being called “stewpendous”!

3 garlic cloves, finely chopped (As a side note- I thought about using a garlic press, but decided not to and chopped it instead. A great tip for finely chopping garlic is to use a bit of coarse salt while chopping it, the coarse salt acts as an abrasive and makes the job of chopping the garlic so much easier.) 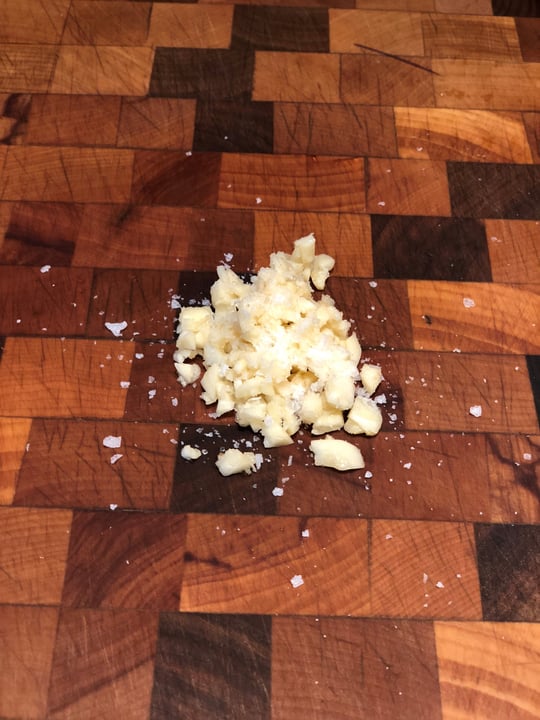 1 tablespoon of finely chopped ginger (Another side note- I thought about using a fine rasp grater and decided not to and chopped the ginger instead, which created a nice textural note to the stew.)

1 cup of crunchy peanut butter (I used an all-natural brand, just make sure to stir in order to combine the oil that’s on top.)

1 bay leaf, preferably fresh (Note- I used a dried one and it was fine.)

4 cups washed and stemmed, loosely packed chopped collard greens (Note- This is about two bunches; it will look like a lot of greens, but they will cook down considerably.)

Combine the stock and tomato paste in a large measuring cup or bowl. Whisk or stir until there are no longer any lumps of tomato paste remaining. Set aside. 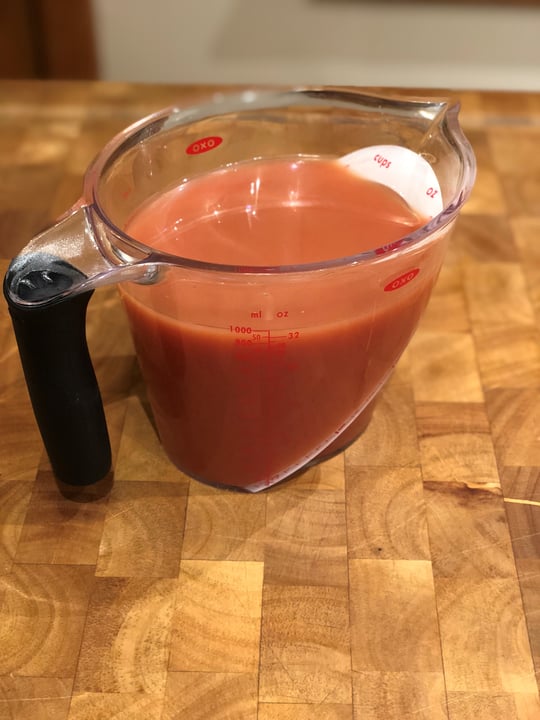 Heat oil in a large pot or Dutch oven over medium-high heat until the oil shimmers. Season the chicken with salt and pepper. Add the chicken to the pot and sear it, in two batches in order to avoid overcrowding the pan, until brown on all sides, about 8 minutes. Transfer chicken to a plate and set aside. 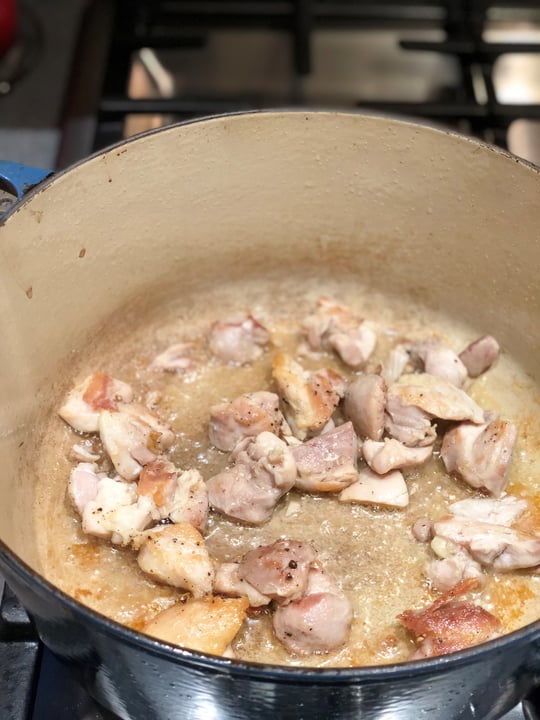 Add the onion, carrots and bell pepper to the pot and cook, stirring until the onion is soft and translucent, about 3-5 minutes. As the onion, carrots and red pepper cook, they will release their juices which will allow you to scrape up the fond, which are the tasty brown bits that gather on the bottom of the pan. Add the garlic and ginger; cook until fragrant, 45 to 60 seconds. 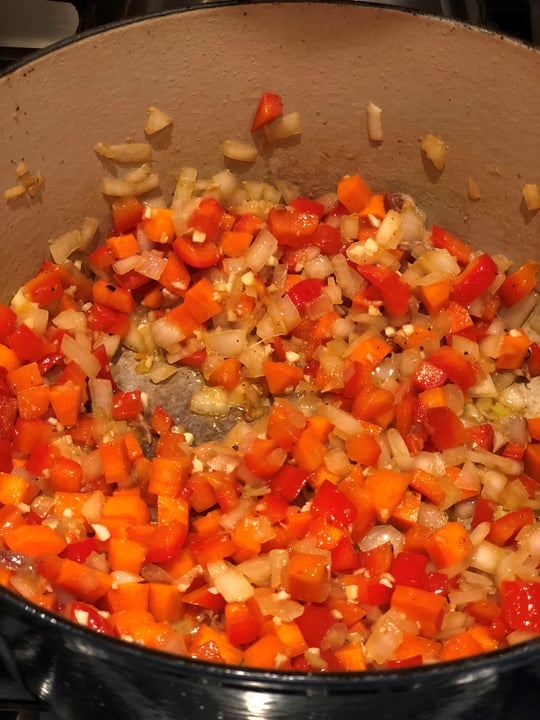 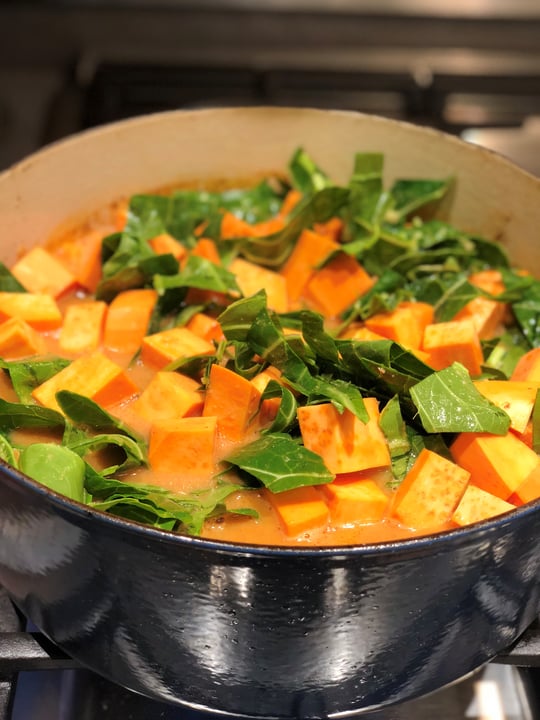 Reduce the heat to medium-low and cook until the vegetables are tender, 25 minutes or so.  Taste and adjust for seasoning with salt and pepper.  Ladle into warm bowls and serve immediately. 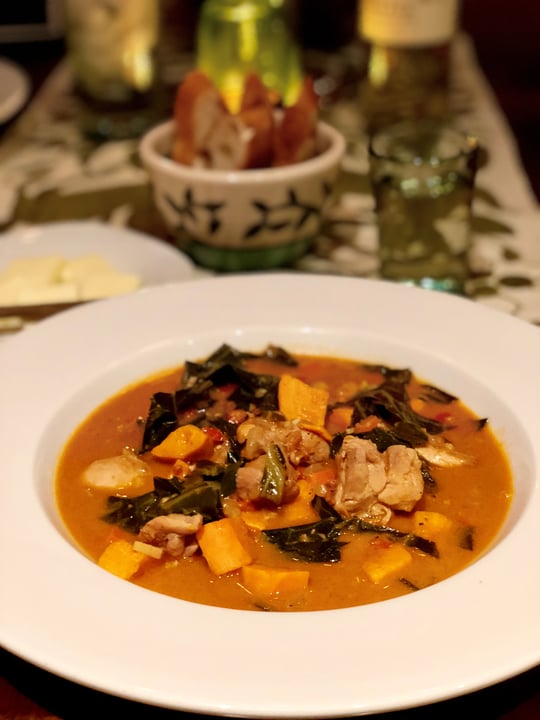 One "souperstar" soup I'd like to share with you is the Greek egg yolk, rice and fresh lemon juice soup called Avgolemono. I added the meat from a shredded rotisserie chicken to turn it into more of an entrée soup.  Served with a simple side salad and some bread and butter, it was the perfect meal for a cold night. One of my favorite things about Avgolemono is the richness that the egg yolks combined with the fresh lemon juice creates. 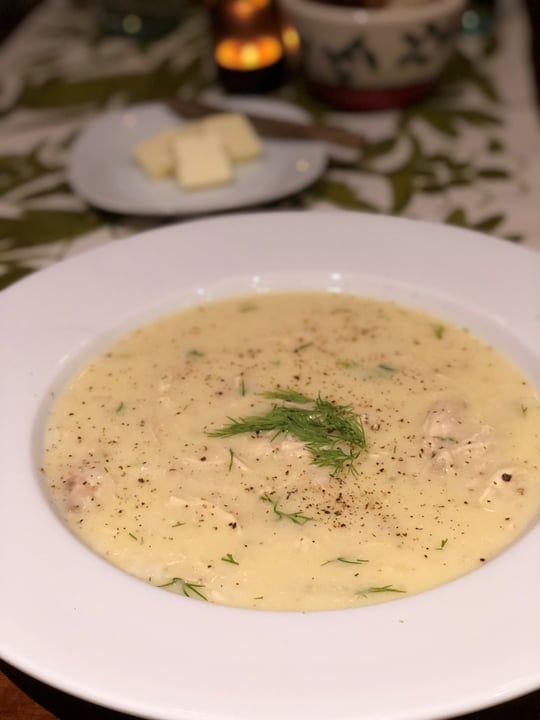 This past summer when Fernando and I were in San Miguel de Allende, Mexico, I made one of my all-time favorite soups, Sopa de Fideo. This Mexican soup has several variations, but most will always contain very thin vermicelli noodles, called fideo noodles, sometimes found in a coil form or broken up so that the noodles are ready to be toasted in a tiny bit of oil until golden brown, giving the soup a nutty flavor. The soup also contains chicken broth, a small amount of tomato product, a bit of diced onion and depending on whose recipe you’re following it might contain a tiny bit of garlic or shredded chicken. 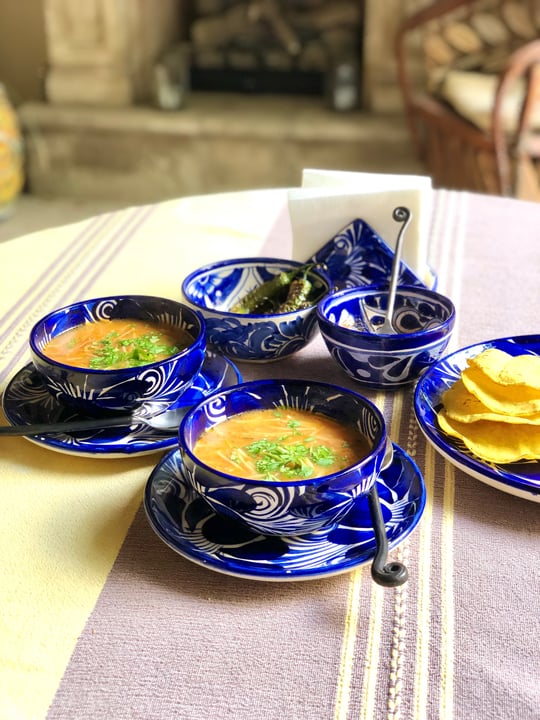 My first experience eating Sopa de Fideo was many years ago when I first met Fernando’s mother. She brought out a bowl of this soup, and I fell madly in love with it! Later, I asked Fernando how to make it and he told me, but it wasn’t until years later when I made it for Fernando’s parents that I discovered he had taught me incorrectly. His mother was watching me make it and with one glance, I knew I was doing something wrong.  Ever so sweetly, she told me everything that I had been doing wrong for so many years. It wasn’t until she showed me the correct way that I realized how a few extra steps produced an even tastier Sopa de Fideo, making this soup a true “Souperstar”.

To learn how to make another amazing ethnic stew which is Brazil's national dish of pork, beef and black bean stew called Feijoada, join us for an upcoming session of The Chopping Block's hands-on Brazilian Carnival class: