Give me a savory recipe or an idea for any savory meal, and I’m on it! But if you ask me to bake a dessert, I would do my best, but not with the same confidence of creating a savory dish. So for the past couple of years, I’ve been on a mission to challenge myself with baking projects, in order to alleviate the fears I’ve had about baking.

What I love most about creating savory dishes is that I can take a recipe and make it my own. I’ve always been comfortable with adding a touch of this, removing a bit of that, substituting this for that and for the most part,  it’s worked out. But that's not the same for baking!  Seeing a pastry chef in motion is like watching a great composer.  The preciseness of each ingredient is like a composer discovering that one perfect note.

My challenge to bake more has included cookies, cakes, pies, brownies, soufflés, and pie dough, which is one of the techniques that has always frightened me the most. There are many pie crust recipes claiming to be the most simple, tastiest, flakiest and the best, and I’ve probably tried at least half of them. Most of the time I would turn to store-bought pie crust. I would bake beautiful pies and post my creations on social media. My friend Michael would see the photos and would give them a like or thumbs up. Finally, one day he told me honestly that my pies would be so much more appealing and probably even tastier if I made them with homemade pie crust. It was at that moment that I decided to challenge myself with making my own pie dough.

Rolling out pie dough has always been a challenge for me. I do it when I’m teaching a class that calls for a pie at The Chopping Block, and they’ve always turned out fine, but it’s not something I’ve never been entirely comfortable with. But at our 20th anniversary celebration last year, Owner/Chef Shelley Young demonstrated to a crowd at our Lincoln Square location the art of rolling out a beautiful piece of pie dough for a tart recipe.  Watching Shelley roll out a piece of pie dough is a magnificent thing to witness!  She approaches it without a bit of hesitation and rolls it out with such skill, comfort and ease. I was assisting with her demonstration that day, so I watched intently as she rolled out the pie dough and as she explained to everyone the technique for rolling it out perfectly. It was shortly after that that I decided to put her words and techniques into action. And yes, I have now finally conquered my fear of rolling out a great pie dough and I couldn’t be any happier. I’m no Shelley, but I’m a lot more confident than I was a year ago.

All to some surprisingly fantastic results! But it was baking a loaf of bread that surprised and thrilled me the most.

Bread protein structures, or gluten, are normally developed through lots of kneading. The Dutch oven technique requires no kneading as gluten develops throughout the rising process. Allowing a long fermentation of the dough helps to trap even more gas which creates the bread’s volume and, at the same time, developes organic acids which imparts a wonderful flavor to the bread.

Normally, it’s essential to have steam at the start of baking a loaf of bread. The activity of yeast accelerates as soon as the bread enters a hot oven. In this method, using a covered Dutch oven with a wet dough will keep the all-important steam inside surrounding the loaf. By preheating the heavy Dutch oven before putting the loaf in, you replicate the direct heat of professional stone hearth ovens. The heat of a Dutch oven remains much more constant than the heat in a conventional oven, by trapping in more steam.

This no-knead bread recipe involves combining six ingredients together in a large bowl, then adding warm water, shaping the bread dough into a ball while it’s still in the bowl, covering the bowl with plastic wrap and letting it rise between 12-18 hours. Out of all of the steps that I mentioned, the most difficult ones are measuring the ingredients, toasting the walnuts and waiting for the dough to rise. Otherwise it’s got to be one of the simplest, crustiest, tastiest cranberry walnut breads that I’ve ever tasted. The other cool thing about this recipe is that the prep time takes as little as 20 minutes, and I haven’t even talked about how to bake off the bread yet, which is another easy step.  So, take that big store grocery chain!

3 cups plus 2 tablespoons of all- purpose flour, plus a little bit more later in the recipe for your hands

¾ cup of toasted and chopped walnuts 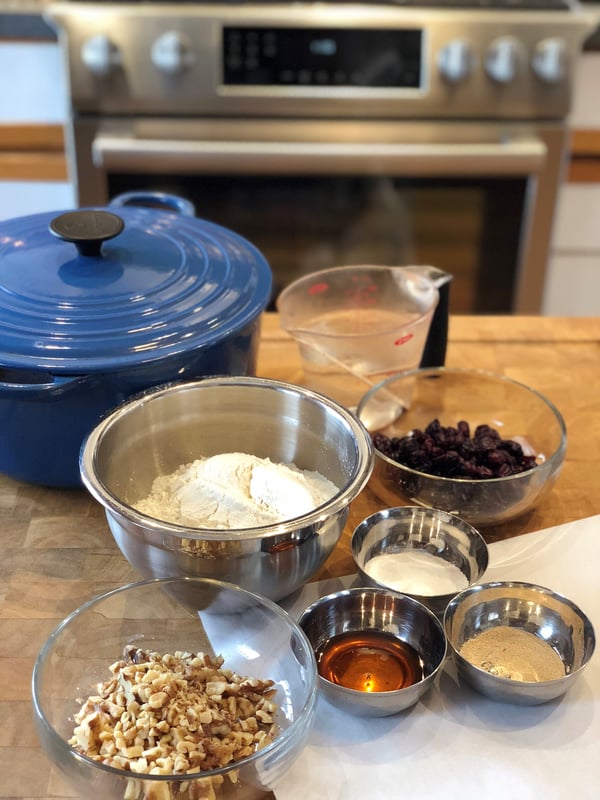 You’ll need a 6-quart or larger Dutch oven or any large pot with a tight-fitting lid (a tight-fitting lid is most crucial to the recipe), a large mixing bowl and a large sheet of parchment paper, one that is safe to use under high heat.

1. Preheat the oven to 475 degrees, yes that’s a pretty high temperature, but it’s the perfect temp to get the crusty brown loaf of bread that you want to achieve.

2. In a large mixing bowl, stir in the first six ingredients of the recipe. There is no need to grease or oil the bowl beforehand. 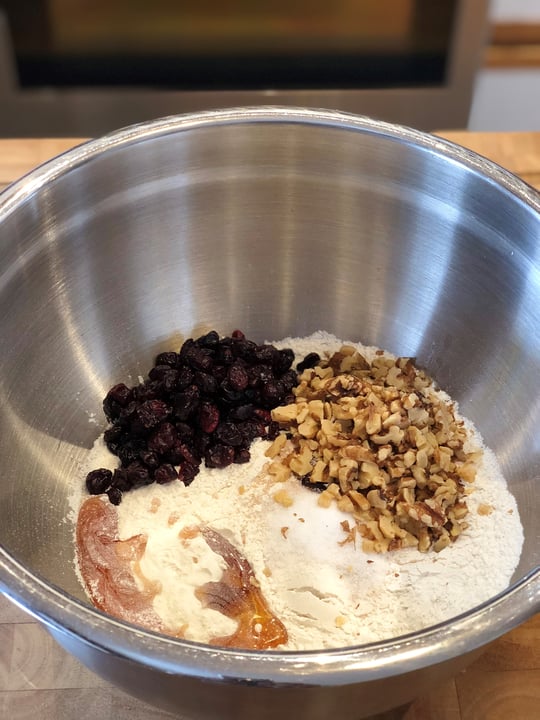 3. Stir in the warm water. The dough should be pretty sticky, but don’t be tempted to add more flour, you want a sticky dough at this point.

4. Gently shape the dough while it’s in the bowl into a ball as best as you can. 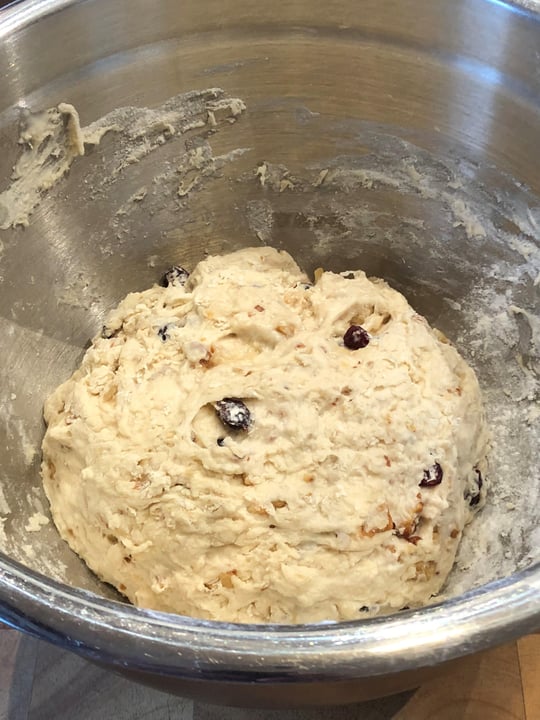 5. Cover tightly with plastic wrap or aluminum foil and set on the counter at room temperature and allow the dough to rise for 12-18 hours. The dough will double in size, stick to the sides of the bowl, and be covered in air bubbles. 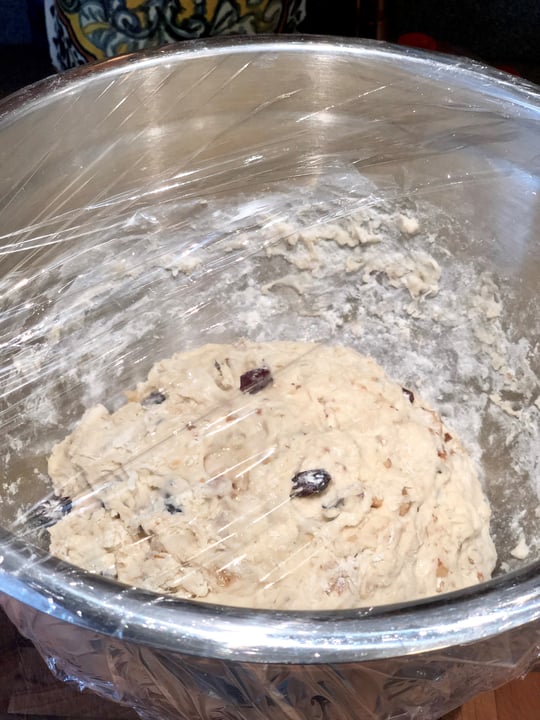 7. Transfer the dough to the large sheet of parchment paper, gently score an X into the top of the dough with a sharp knife. Cover the dough lightly with plastic wrap and leave alone for 30 minutes. 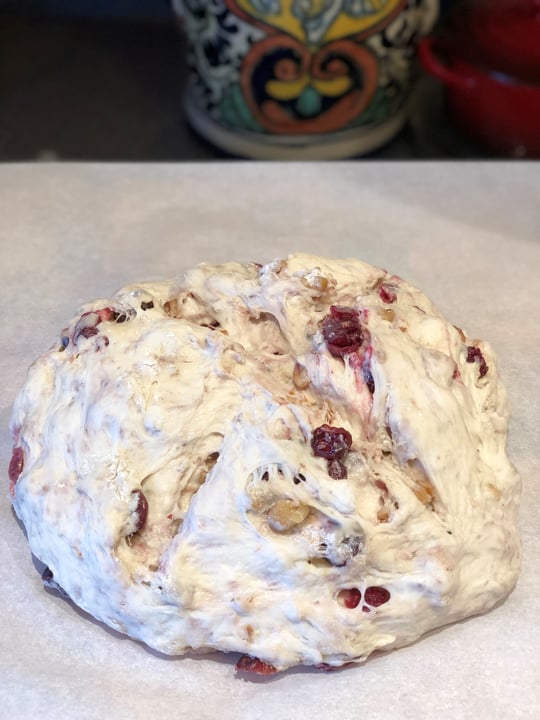 8. During those 30 minutes place your Dutch oven, or heavy-duty pot with the lid inside the pre-heated oven for 30 minutes so that it’s extremely hot before the dough is placed inside.

10. Bake for 25 minutes with the lid on. After 25 minutes remove the lid and continue to bake for 8-10 minutes longer until the bread is a nice golden brown. Remove the pot from the oven and allow to cool on the counter top for at least 30 minutes before slicing and serving.

You can cover and store this bread at room temperature for 1 week.

The dough takes up to 18 hours to rise, so this is a wonderful recipe to begin 1 day ahead of time.  You can also bake the bread, allow it cool and freeze it for up to 3 months.  Just thaw the bread in the refrigerator and allow to come to room temperature before serving.

After making this bread recipe a couple of times, I wondered how the bread would turn out with the addition of Turbinado, (Sugar in the Raw) sprinkled on top of the dough before placing in the oven. This adds a really nice flavor to the bread as well as a nice great addition to the golden-brown crust. 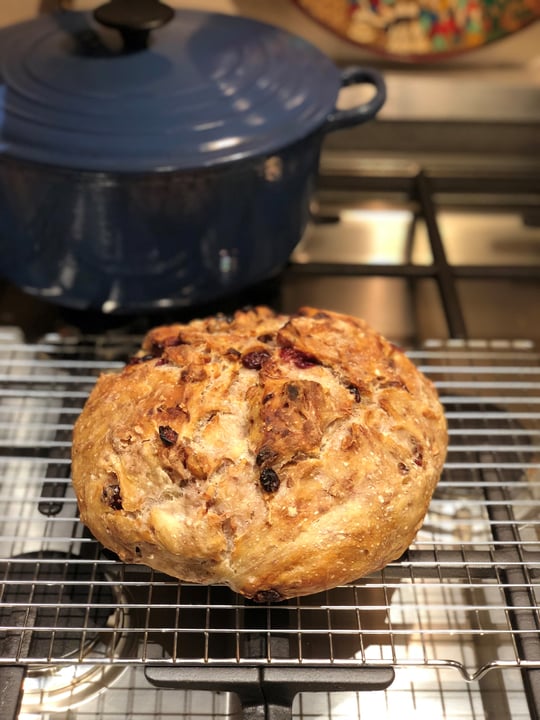 Whether you’re new to baking bread like me or a veteran bread maker, you really should try this method and see how simple and tasty this recipe is. I’m sure you’ll soon be baking bread in a Dutch oven too!

If you could use some help perfecting your bread baking skills, check out one of our upcoming bread making classes: