I love taking on challenges in the kitchen, and they usually involve baking. But for at least two years I’ve been curious about the process of making a Rigatoni Pie.

A Rigatoni Pie is basically a baked Ziti casserole, but with the challenge of using a springform pan. The springform pan gives the dish its pie shape. I like to think of it as a thick crust pizza, but made with pasta as the crust. As a matter of fact, one of the many recipes developed for the rigatoni pie is modeled after a pizza. It gets its distinctive pie shape from standing cooked rigatoni noodles up and around the entire springform pan, creating a concentric circle of rigatoni noodles. Pretty darn cool, also pretty darn terrifying! But I strongly believe that it’s a dish worth attempting because it will give a huge wow factor to any dinner.

The pie became a viral sensation a few years ago and almost immediately, several different versions and recipes started sprouting. I chose what I thought was the simplest: “Rigatoni Pie Alla Vodka”.

I always like trying out new recipes for dinner parties for close friends. It’s a strange and almost frightening thing to do, but I would say it's worked out almost every time.

I wanted a side dish to go along with the pie, and I chose to make shrimp meatballs. I know what you’re thinking, “How can you call them meatballs when there’s actually no meat involved?" My guess is that the person who created the recipe thought that it would be more exotic to call them meatballs.  Whatever the reason, I had some pescatarian friends (the only protein they eat is fish or seafood) attending this party. These shrimp meatballs were actually my favorite part of the dinner. They had the same flavor and tenderness as a perfectly cooked meatball, with far less cooking time, just 10 minutes after dropping them in pasta sauce.

I also made a salad and Rosemary and Asiago Cheese Bread, baked in a Dutch oven. I’m such a huge fan of baking breads in a Dutch oven because they are simple, and there’s no kneading involved! All that is required is a heavy Dutch oven, a ripping hot oven, some parchment paper, plastic wrap and a few ingredients. The only thing that is time consuming is letting the dough rise for 18 hours or overnight. If you ever decide to make bread in a Dutch oven, I want to caution that you will place the Dutch oven into a really hot oven prior to placing the bread dough into it. The Dutch oven and lid will be extremely hot when removing it from the oven so take extra care by using heavy padded oven mitts.

For dessert, I made a Pistachio-topped olive oil cake with a lemon cardamom syrup drizzled over the top. I topped each slice of the cake with a dollop of crème fraiche that had a bit of vanilla bean stirred into it.  The cake had a moist, dense texture, which was due to the addition of the finely ground almonds and pistachios and olive oil in the cake batter.

I adapted the Rigatoni Pie Alla Vodka from a recipe that I found on the Food Network website.  As much as this recipe can be a tad frustrating when arranging the slippery cooked rigatonis in the springform pan, the rest is pretty simple and straight forward. I suggest giving it a try along with the pistachio-topped-lemon-olive oil cake.

1. Heat 1/4 cup of the olive oil with the shallot in a large saucepan over medium low heat. Once it begins to sizzle, cook the shallot, stirring occasionally, until the chopped shallot is soft and just beginning to brown,  between 5-6 minutes. Stir in the red pepper flakes, then add the tomatoes with their juices, vodka, and 1/2 cup of water. Increase the heat to high and bring the sauce to a boil, crushing the tomatoes with the back of a spoon. Lower the heat to maintain a simmer and cook stirring occasionally, until the sauce has reduced and thickened, which should take around 15 minutes. Stir in the cream, and cook for 1 minute. Remove the pan from the heat and stir in the basil leaves and season with the salt and pepper. Let the sauce cook for 10 minutes, adjust the seasoning if necessary, let the sauce cool for 5 minutes, then puree the sauce in a blender until smooth. Caution: when using the blender, the sauce should be blended in batches, making sure that the blender lid is very securely tightened on the blender jar. I suggest even covering the blender lid with a kitchen towel while blending. You’re working with a very hot sauce and you want to make sure to avoid any mishaps.  After the sauce is blended, place back in the saucepan and cover with the lid.

2. Preheat the oven to 375 degrees. Grease a 9-inch springform pan with 1 tablespoon of the olive oil.

3. Bring a pot of generously salted water to a boil. Once the water has come to a boil, drop in the pasta and cook until slightly al dente, about 8 minutes. Drain the pasta, and spread them in a single layer on a rimmed baking sheet and toss with the remaining one tablespoon of olive oil.

4. Stand the rigatoni on their ends in the prepared springform pan, working your way around the edges of the pan, until the pan is completely filled. 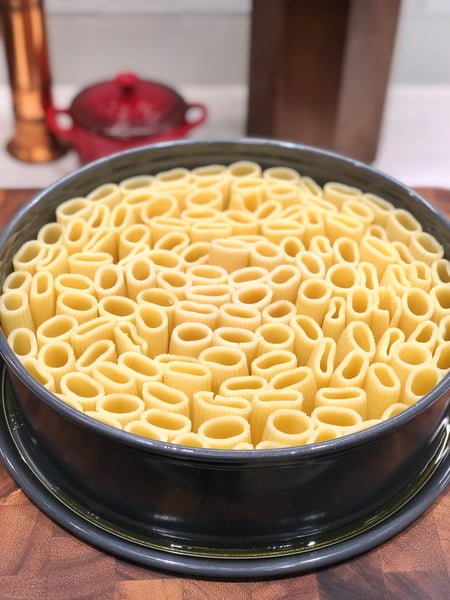 Put the pan on a foil-lined baking sheet to catch any drips and there will be plenty of of them! Pour the sauce over the pasta, spreading it with the back of a spoon.  Sprinkle with the mozzarella cheese, followed by the grated Parmesan. 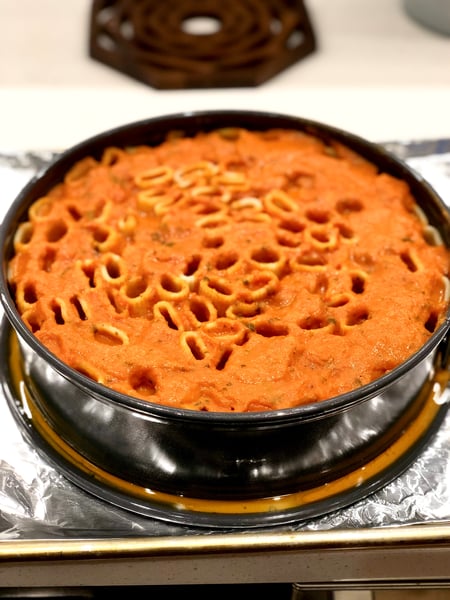 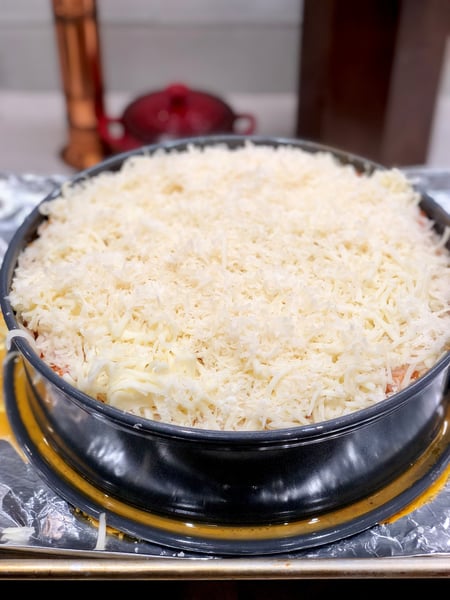 5. Cover the pan with foil, doming it slightly to avoid touching the cheese. Spraying the foil with cooking spray also helps in preventing the cheese from sticking to the foil. Bake in the oven for 30 minutes. Remove the foil from the pan and continue cooking until the top is golden brown and bubbly, about 30 minutes more. Let the pie cool for 10 minutes, then carefully remove the sides of the pan and sprinkle with basil. Using a sharp knife, cut into wedges and serve. Some grated Parmesan cheese on top is also a nice addition. 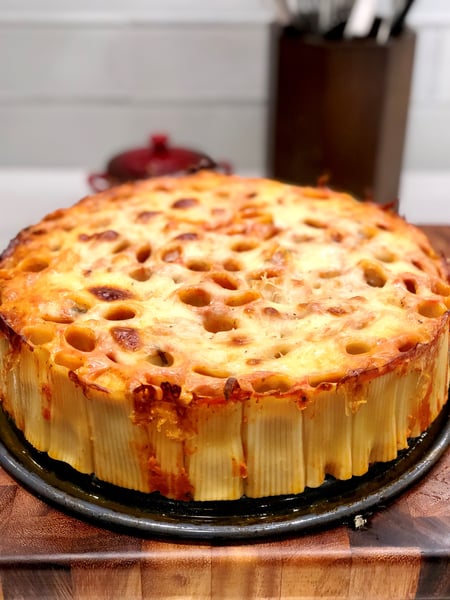 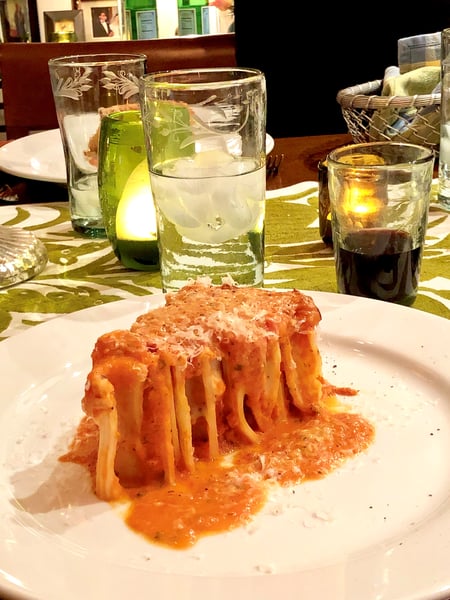 The pistachio olive oil cake that I adapted from a recipe I found on the Food and Wine website has to be one of my all-time favorite cakes! Cakes and desserts are always a challenge for me.  I just didn’t inherit those baking genes that are widely held by my sisters, my mom and my grandmothers’.  But, I’m always looking for new recipes and to conquer that baking challenge.

This cake gets it density and its distinctive nutty flavor from the ground up pistachios and almonds that are part of the batter. It’s very citrusy from the lemon juice and zest. But the olive oil and the bit of butter that’s part of the cake batter is the star of the show, as well as the lemon cardamom syrup that is poured on the still warm cake. This recipe is definitely a keeper in my house. 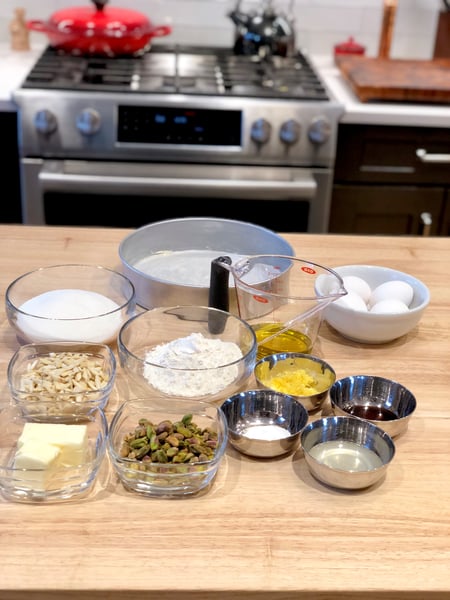 I topped this with crème fraiche that I added 1/2 of a vanilla bean with the seeds scraped. You can also top this cake with whipped cream, and add a 1/2 a teaspoon of vanilla extract while whipping, if you prefer.

1. Preheat the oven to 350 degrees. Butter a 10-inch round cake pan, line the bottom with parchment paper and butter the paper. In a food processor, pulse the almonds and 2/3 cup of pistachios until finely ground. 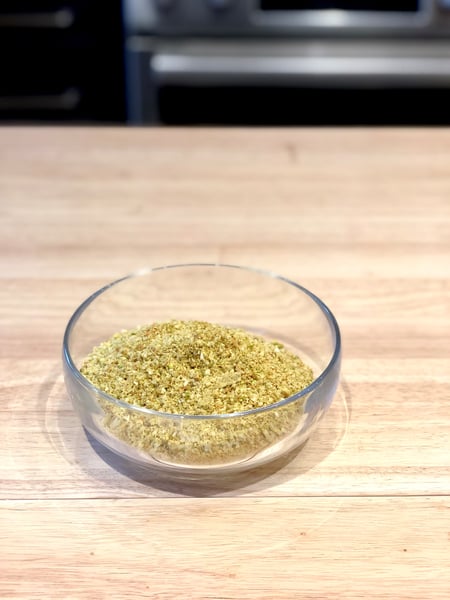 2. In a large bowl, using a handheld electric mixer or a stand mixer with the paddle attachment, beat the butter with the sugar at medium speed until it’s the texture of moist sand. Add the eggs one at a time, beating well after each addition. Add the lemon zest, lemon juice and vanilla seeds or paste and beat on medium speed until smooth. Gradually, in a steady, thin stream, beat in the olive oil. Using a rubber spatula, fold in the ground almonds and pistachio nuts, flour and salt. Scrape the batter into the prepared pan. 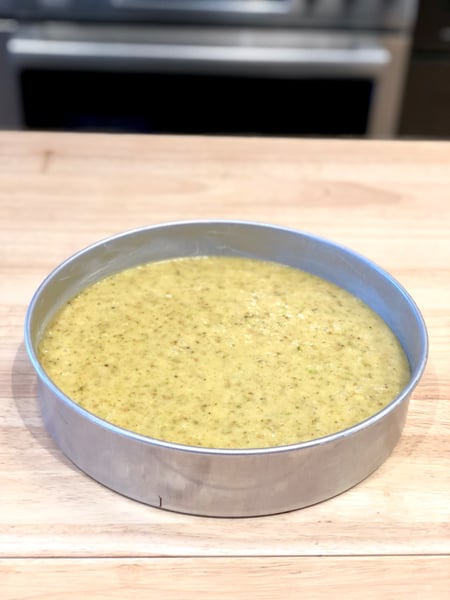 3. Bake the cake for about 55 minutes or until a toothpick inserted in the center comes out clean. Transfer the pan to a wire rack and let the cake cool for 15 minutes. Invert the cake on the rack and peel of the parchment paper. Invert the cake again onto a serving plate. 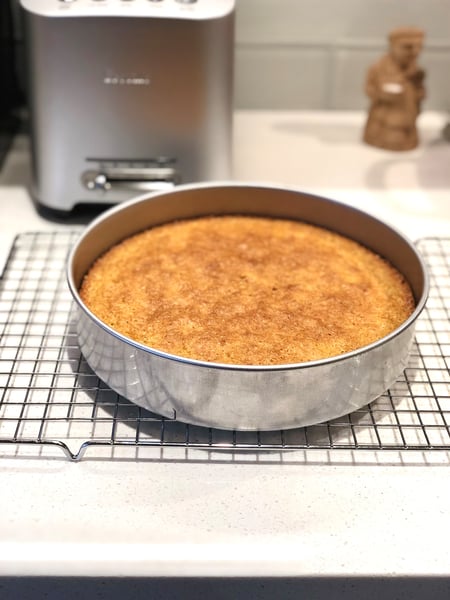 4. While the cake is cooling, toast the remaining 1/2 cup of pistachios in a pie plate for about 8 minutes, or until fragrant, taking care to not let them burn while toasting. Remove the pistachios from the oven. If you prefer to have your cake garnished with roughly chopped pistachios as I did, after removing the nuts, allow to cool for 5 minutes before chopping, or you can garnish the top of the cake with the pistachios whole.

5. To make the syrup: in a small saucepan, combine the lemon zest, lemon juice, sugar, water and slightly crushed cardamom pods and bring to a simmer over medium heat, stirring until the sugar has completely dissolved. Turn off the heat, let the cardamom pods steep in the syrup for about 5 minutes. Remove the cardamom pods from the syrup and discard, pour the syrup over the warm cake and scatter the pistachios all over the top of the cake. Let stand for one hour, then cut into wedges and serve with creme fraiche, or whipped cream.

The person who created the recipe suggests serving this cake with crème fraiche, and I agree with him. I kept going back and forth between serving it with whipped cream and I’m so glad that I took his suggestion and went with the crème fraiche with my addition of the vanilla bean seeds.

The dinner party was a hit! I posted some of the photos I took of the Rigatoni Pie and the Pistachio Cake on social media and the responses were phenomenal. The Rigatoni Pie might be a bit challenging, but it’s so worth it. Who doesn’t like a little wow factor when you’re throwing a dinner party?

If you are interested in learning how to make pasta from scratch (which would be an even bigger challenge!), you must take The Chopping Block's Pasta Workshop. We have a brand new Spring menu coming in April! And if you want more dinner party ideas, don't miss Date Night: Spring Dinner Party.