I’ve been working for the past few months on a new boot camp for The Chopping Block all about the expansive world of modernist cooking. Since our first session of this class is coming up this Saturday, I wanted to share a little bit of it with you. 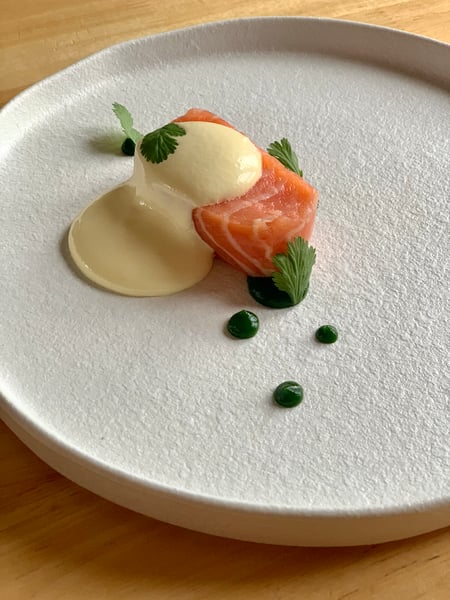 Though modernist cooking has its roots firmly in the fine dining world, first coming to prominence in the kitchens of vaunted chefs like Ferran Adria of El Bulli, and Heston Blumenthal of The Fat Duck—who went on to inspire scores of other high end experimental modernist restaurants like Mugaritz, Quique Dacosta, Alinea, Moto, WD~50, El Cellar de Can Roca, and countless others—its ideas and approach have become much more commonplace even in the kitchens of ambitious home cooks the world over. However, even though some of its techniques have made their way into the mainstream, modernist cooking is still viewed as a fairly esoteric and impractical approach to cooking that prioritizes expensive gadgetry and arcane powders and additives to achieve its effects. In Modernist Boot Camp, we hope to show you that these techniques and ingredients are able to be understood and utilized by anyone, and many of them are so practical that you will find yourself reaching for them frequently in your home kitchen.

To give you an idea of what we’ll be covering in class, here’s an excerpt from a section of the written material for the course about hydrocolloids.

Modernist cooking often gets criticized for using ingredients perceived to be ‘unnatural’. This is understandable when you see recipes calling for things that have names like xanthan gum, calcium lactate and sodium hexametaphosphate that sound like they belong in a chem lab, not in the kitchen. However, what is a kitchen if not a chem lab of sorts?

The only reason people balk at these new ingredients is because they aren’t in wide enough use to have a common name. Sodium bicarbonate sounds much less friendly than its more common name ‘baking soda’. Similarly it's obvious why we prefer cream of tartar over tartaric acid or salt over sodium chloride. But just because something doesn’t have a common name, doesn’t make it inherently worse or less natural than any other ingredient. It also doesn't mean it’s more difficult to use, or only for advanced cooks. The category of modernist ingredients most commonly affected by this mentality is hydrocolloids. Though the name can be off putting or intimidating most hydrocolloids are perfectly natural, and no more difficult to use than cornstarch or all purpose flour (actually, both of those ingredients are hydrocolloids).

Hydrocolloids can be difficult to define without getting impenetrably technical, but basically they are large molecules that are attracted to water (hydrophilic) that, when dispersed in water can cause it to change state, typically changing from a liquid to a gel with varying properties depending on how much water is available. Most hydrocolloids are complex polysaccharides (carbohydrates), with gelatin being the only major example that is derived from protein instead.

The benefits of using modern hydrocolloids are many and varied. Some, like xanthan gum, allow you to achieve a pleasing texture in a sauce while using minimal thickening agent to keep the flavors of your sauce vibrant. Others can allow you to achieve things that would be impossible otherwise, like forming gels that set when heated rather than cooled, or encapsulate a liquid in a thin film of gel to form ball of flavor that bursts in your mouth (commonly referred to as ‘spherification’). They allow you to produce totally novel effects, and also to improve the results of recipes that use more traditional thickening methods.

Using hydrocolloids effectively is pretty straightforward and essentially boils down to two things: proper dispersal and proper hydration. If you know the best way to disperse and hydrate the particular hydrocolloid you’re using, success is all but guaranteed.

Dispersal: one of the trickiest hydrocolloids to disperse properly is actually flour. In fact dispersing flour can be such an annoyance that there are multiple techniques dedicated to this task (roux, beurre manie). But dispersing your hydrocolloids doesn't have to be complicated. In fact, other than flour just about every hydrocolloid can be dispersed by mixing in cold water using a whisk, blender, or immersion blender. If your hydrocolloid can be hydrated in cold water like xanthan gum or methylcellulose (among others), you will want to make sure you’re using a high speed mixing technique (i.e., not a whisk) to avoid lumps. This information is readily available for free for just about all hydrocolloids online, so just check on what is best for the one you’re using.

Hydration: This is slightly trickier than dispersion, but only slightly. Every hydrocolloid becomes fully hydrated at a specific temperature. Once you know that temperature you just need to bring your water/hydrocolloid mixture up to it to achieve proper hydration. A good number of hydrocolloids, like xanthan gum and lambda carrageenan, hydrate in cold water which makes your task especially simple. Other hydrocolloids form a gel depending on the ion content of the water (most commonly calcium ions). This is the mechanism that allows spherification (and its variation ‘reverse spherification’) possible. To list all the hydration temperatures for every hydrocolloid here would be impractical, but luckily, as mentioned above, you can easily find the hydration information for your hydrocolloid online.

Now that you have some familiarity with what hydrocolloids are and how to use them, why not try to put that knowledge into practical use. Try out this recipe for parsley fluid gel that we use as part of one of the dishes we make during Modernist Boot Camp.

Most of us are familiar with the concept of gels, whether that be in the form of a Jell-o cup, or the flexible ice pack used to sooth injuries. We usually don’t think about gels as pourable, or fluid, but modernist chefs have brought fluid gels into the kitchen in many different forms and in many different applications. Of course, not all culinary fluid gels are novel or unfamiliar; ketchup is a thixotropic (loses viscosity when force is applied) non-newtonian (viscosity changes when when force is applied) fluid, which is why it can be such a hassle to get out of a glass bottle.

You can see the parsley fluid gel in action in these shots of plating the salmon mi cuit dish from our upcoming Modernist Boot Camp. 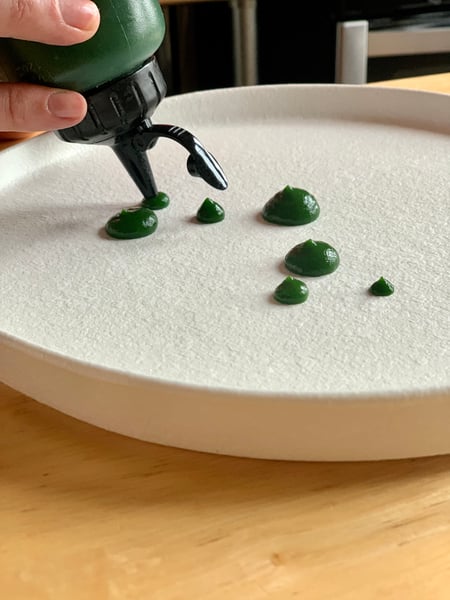 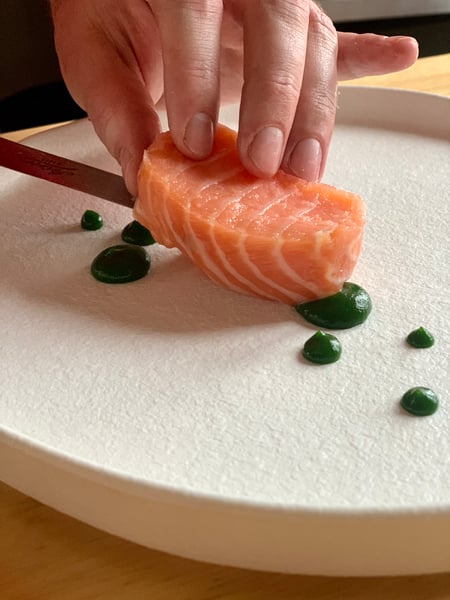 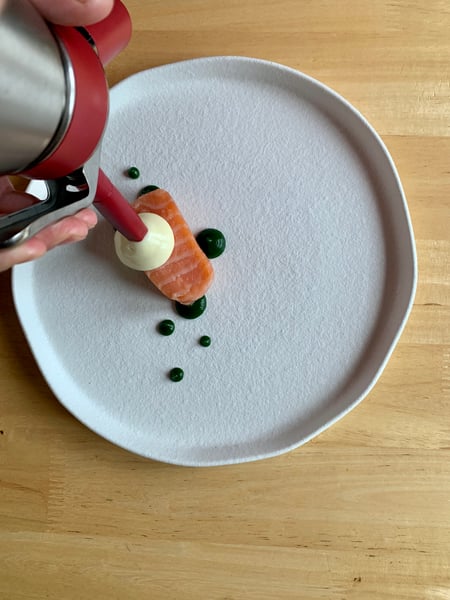 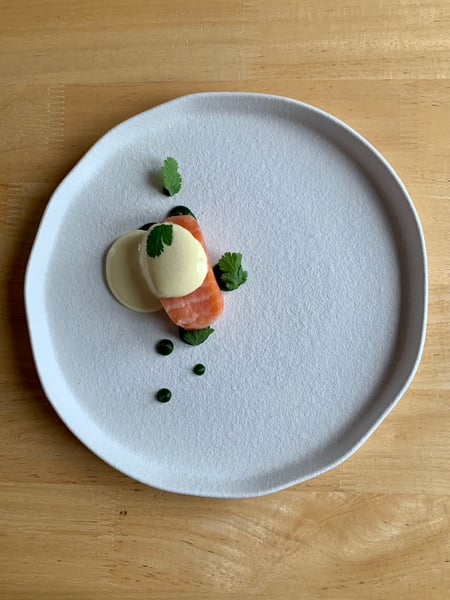 If this kind of cooking and thinking about food interests you, I recommend checking out our Modernist Boot Camp (developed, of course, by yours truly) which will feature a more in depth discussion of hydrocolloids, as well as teaching you the ins and outs of sous vide cooking, how and why to use scales in the kitchen, taking precise measurements, understanding foams, modern emulsions, and more. We'll meet this Saturday, March 26 from 10am-3pm at our Merchandise Mart location. Hope to see you there!