Paying it Forward with Espelette Pepper

You may have read an earlier post of mine “Espe What?" extolling my appreciation, perhaps even infatuation, with espelette pepper. Years later, my infatuation is still as strong. In fact, anyone who has ever taken a cooking class with me has more than likely heard me drone on about it.

When I was conducting my annual cooking demonstration at Chicago Botanic Garden last year, I once again praised the merits of espelette pepper: its subtlety, its miraculous ability to retain elements of a sweet red pepper while bringing just enough heat to the party to make it interesting and its ability to take a simple broiled piece of fish or a sautéed chicken breast and make them sing! Someone in the audience that day happened to have gotten some espelette pepper seeds and had grown them. He came up to me and asked if I would like some and of course I said yes! Thank you Robert Klein for sending me those peppers.

I planted the seeds in the spring. It was a bit of a cool summer this year, so my plants did not yield a ton of peppers but they yielded enough for me to dry and grind some for this year. I really wanted to eat some of the peppers fresh since I have never actually tasted them that way, but I decided to take the limited number I had and dry them so I can harvest the seeds next year and plant them. 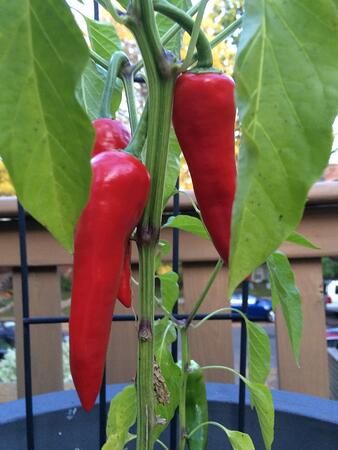 I looked online at techniques for drying peppers and everything seemed way more complicated than it needed to be. So I called Robert who had given me the peppers and asked him how he dried them. I followed his recommended technique and they came out perfectly.

How to Dry Peppers

I tied a string to the peppers' stems and hung them until they dried, which took about a month. 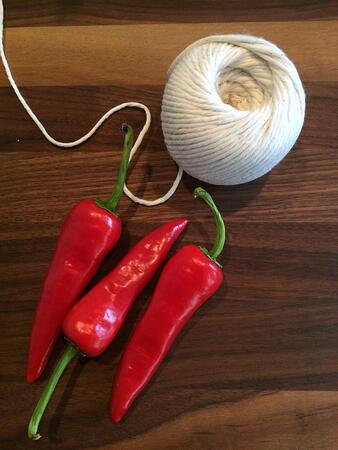 The only trick is to make sure the peppers don’t touch. Leave plenty of room around them for the air to move freely. Keep them in a dry environment, which at the time of harvest ,is about the time we turn on the heat in our homes in Chicago. Environments don’t get much drier than that. 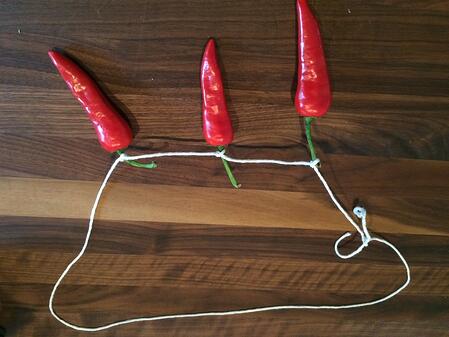 After the peppers are dry, you can remove the seeds to plant them. The dry pods are what you grind to use as a spice. Put them in a coffee grinder to grind them and put them in an air tight container when you’re done. I expect a huge harvest next year, and plan on making hot sauce and infusing some vinegar with the fresh peppers. 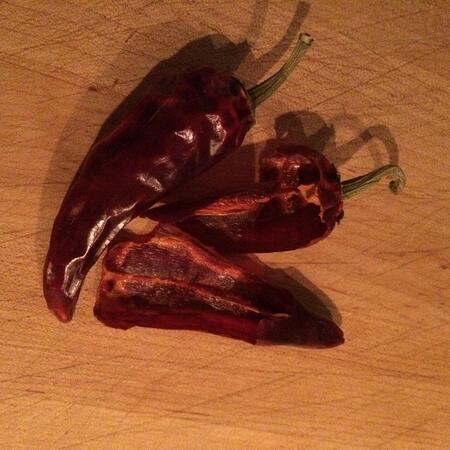 I thought I would pay it forward and offer two people some of my espellete seeds so you can plant them. If you would like to get some of the seeds, please post a comment on this post. The two people who come up with the best responses will get the peppers!