A Chili Worth the Extra Work and Wait

One of the greatest things about living in a city like Chicago is being able to experience the change of the seasons.

My favorite season happens to be fall. It’s the time of year when we start preparing for the crisp and chilly temperatures we’re about to experience. We begin to unpack those sweaters and jackets that have been packed away for half of the year.

But when I think of fall and winter, I tend to think of all the great cold weather dishes, the type of dishes that seem to hug you close with every spoonful or forkful you eat such as meatloaf with mashed potatoes, roast chicken or beef with roasted fall root veggies, a huge variety of casserole dishes, hearty stews and soups and of course, chili.

I eat all types of chili. It could be vegetarian chili, Cincinnati chili, Texas chili, or maybe the red or green chili famous from New Mexico. It could be made with ground beef, turkey, chicken or sausage, beans or no beans, spiced or mild. It just has to have all the aspects and flavors of what a chili is supposed to be.

I’ve made a version of every one of these chilis, and I love being able to experiment and tweak the balance of spices, chilies, meats, ingredients and sometimes the manner and time it takes to cook the chili.

The definition of the word chili is that it’s a stew–like soup made entirely with meat, chilies or chili powder or both according to what region of the United States that you live in. It can also include beans. The term “Chili Con Carne” is Spanish and means with beef.

My favorite chili is Cincinnati Chili, but it's where I differ with the definition of the word “chili soup”.  Cincinnati chili has some very rich, complex and slightly unusual ingredients than most chili recipes, which makes it all the more exciting to eat. Cincinnati Chili contains ground beef, but the beef is much finer than in most chilis. A couple of the spices in the chili are cinnamon and allspice, which lend a bit of sweetness and speaks to the Greek origins of this chili. This combination of exotic spices, tomato, chili powder and aromatics and turned into unique thick soup and served in a very unusual way is why I feel this chili is pure genius! Now this chili can be served what’s called “five-way”. One-way would be just the chili itself. Two-way would be the chili served on top of cooked spaghetti, three-way would be to add shredded cheddar cheese, my favorite. Four-way would be to add diced onions and lastly, five-way would be to add kidney beans. This chili completely demolishes the definition of chili and takes it to a different planet.

The other day I was thumbing through some chili recipes and stumbled upon a recipe that uses boneless beef chuck, dark beer and 5 types of dried Mexican chiles. I thought, wow this is interesting. I wondered what would happen if I created a new recipe based on this one.

Making chili can be a time-consuming adventure, but it's so worth it. You have a slowly simmered meaty, spicy soup where the flavors have had time to blend and meld together to create a bowl full of warm soothing hugs. This soup I’m about to tell you about will do it to you, too. It’s a bit time consuming and there are a few more steps than normal, but at the end you will have one of the most exciting flavorful, spicy, meaty, complex, warming chilis ever.

I used several dried Mexican chiles for this recipe. Each dried chile imparts a different flavor profile to this stew/soup such as fruitiness, smokiness, sweetness and heat.

5 pounds of English cut beef short ribs with the bone

1 bottle of dark Mexican beer such as Negro Modelo

3 tablespoons of masa harina and 2 cups of beef stock (Note: masa harina is the corn flour that is used to make tortillas and tamales.)

½ cup of San Marzano whole tomatoes with the juice

3 cups of beef broth strained from the braised short ribs 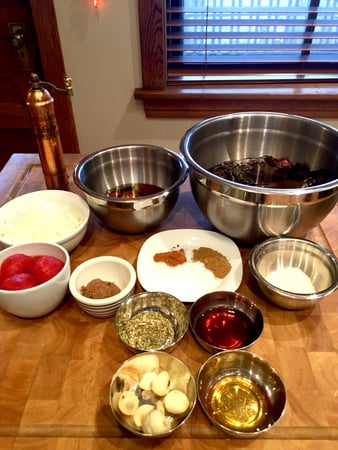 4 scallions sliced on the bias

2 chopped jalapenos (remove the seeds if you prefer milder heat)

3. Completely season the short ribs with 2 teaspoons of salt and 1 teaspoon of ground black pepper.

4. Sear the short ribs on all sides in 2-3 batches until golden brown. Avoid crowding the pan in order to achieve a golden brown sear. Place the browned short ribs aside on a large plate or platter.

5. Add the onion quarters, large chunks of carrots and celery to the pan. Sauté until the vegetables begin to soften and caramelize slightly. Add the tomato paste and stir for a minute and coat the vegetables, cooking out the raw tomato paste flavor.

6. Deglaze your pan with the bottle of Negra Modelo beer, scraping up all the brown bits (or fond) that have collected on the bottom of the pan. Add the short ribs and the juices that have collected in the plate back to the pot along with 3 cups of beef stock and the sprig of fresh thyme. Bring to a boil and cover with a tight lid. Place in a preheated oven and braise the short ribs for 1 hour and a half. Remove from the oven and let the pot cool for at least 3 hours.

*Patience comes into play at this point in order to achieve the most complex and tastiest chili.

*Stay with me. I promise this will be worth it!

8. In the morning, remove the pot of braised short ribs from the refrigerator. Remove the solidified fat that has gathered on top of the pot and discard and remove the short ribs.  Next cut the meat away from the bone of the ribs. Normally when braising short ribs, they’re cooked until the meat falls off the bone. But by cooking them this way the meat will maintain a tender chunky texture in the chili while it’s simmering.

9. Remove any of the fat from the short ribs and cut the meat into 1-inch chunks and set aside. Remove the vegetables and the sprig of thyme. Strain the beef stock into a bowl and set aside. This should result in at least 2 cups of strained stock.

10. Remove the stems and seeds from all the dried chiles. Heat a large, dry skillet over high heat and toast the peppers in batches, until browned in spots but being careful not burn, about 30-45 seconds per side of each pepper. Set all the peppers aside together with the exception of the arbol chiles, keeping them separate. In the same pan, toast the garlic cloves in their skin, tossing until browned in spots. This should take about 3 minutes. 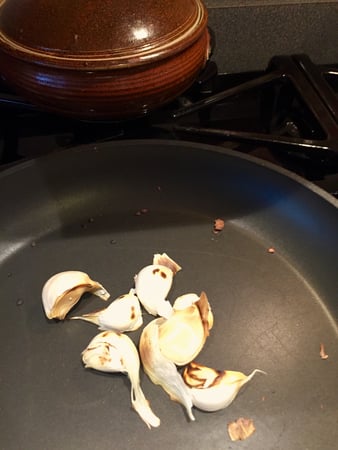 11. Place arbol chiles in a small heat proof bowl and place the other toasted chiles in a larger heatproof bowl. Pour hot water over the chiles until submerged completely for at least 45 minutes. Place a plate on top to accomplish this.

12. After 45 minutes have elapsed. Remove the skins from the toasted garlic cloves and place in a blender jar, along with the all the reconstituted chiles with the exception of the arbol chiles and a half of a cup of the San Marzano tomatoes, along with 4 cups of the chile soaking liquid. Add the honey, 1-tablespoon salt, 1 teaspoon ground pepper and puree until smooth. Add the arbol chiles a couple at a time and blend. Now taste, if you prefer additional heat, add a couple of more arbol chiles and puree, tasting until you’ve achieved your heat preference.

13. Strain the mixture through a fine mesh sieve into a large bowl, using a rubber spatula to press the puree through the sieve. Once again patience is golden. Afterwards you’re going to have a smooth puree of some of the tastiest sauce imaginable.

14. In a large Dutch oven or pot over medium heat, add the remaining 2 tablespoons of vegetable oil. Cook the diced onion and ¼ teaspoon of salt until soft, stirring for about 5 minutes. Add the cumin and stir for a minute more. Add the chile puree and bring to a simmer. Cook, stirring for at least 15 minutes until the puree has lost it raw chile flavor. Now add the 2 cups of strained beef broth; along with the Mexican oregano and the beef chunks back to the pot. Thoroughly combine and stir the masa harina and 2 cups of beef broth and add to the mixture. The masa harina acts as a thickener and also adds a slight corn element to the chili. Bring to a boil, reduce to a simmer, and cook uncovered until meat is tender and the broth is thickened, for about 2 hours, making sure to stir the chili every half hour or so to avoid it sticking to the bottom of the pan and the possibility of scorching. Next add the drained black beans and cook gently for another 30 minutes. 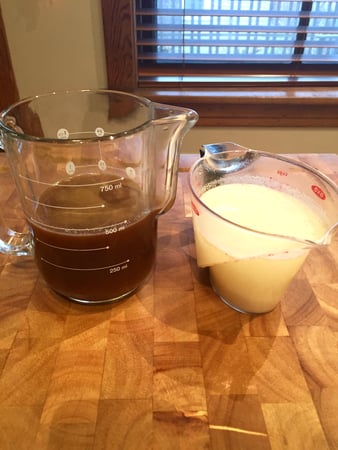 16. Ladle the chili into a large bowl. Sprinkle on top the crumbled queso fresco, chopped jalapenos, scallions and cilantro. Place a generous tablespoon or more of the Mexican crema or sour cream in the center and serve.

I have to admit that this chili does require several steps. It also does require a bit of patience and time and has a slight expense to it. But believe me, what you’re left with is one the most complex, soothing, meaty, spicy chili’s you’ve ever experienced. The combination of the five toasted chiles brings a level of smokiness, heat, tones of raisins and prunes to this wonderful chili. For those reasons, this has now become my favorite chili. I’m really looking forward to serving this chili to my friends, maybe even this weekend. This chili will serve 6-8 people. It is perfect for an intimate dinner for two with leftovers for several more dinners or for a small dinner party.

I crafted a blood orange margarita to serve with this chili and it turned out to be the perfect accompaniment! 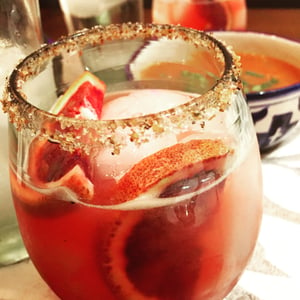 For more hearty dishes like this (but maybe without so many steps or time required), check out The Chopping Block's Cold Weather Soups and Stews cooking classes coming up in January. Choose from: