We encounter many different types of students in our Culinary Boot Camp. From retirees to newlyweds to college students, The Chopping Block's week-long intensive deep dive into the culinary arts appeals to different people in many ways. Some people have always had "learn to cook" on their bucket list, others want the know how to cook better food for their families and still others come for the inspiration it will bring to their kitchens and the rest of their lives.

Bestselling author, podcaster, blogger, public speaker, influencer, wife and mother Jen Hatmaker wanted to "invest in my own creativity for no other reason than the love of it is new territory." Jen first learned about Culinary Boot Camp from her friend and fellow author Shauna Neiquist who attended the program a few years ago. She asked her husband Brandon to gift it to her for Christmas, and planning for a week in Chicago began. Jen traveled from her home in Austin, Texas (which was featured in My Big Family Renovation on HGTV) for our June session.

Jen has always loved to cook and with five kids, she does it often. She defines herself as "something north of a beginning home cook and south of a super accomplished home cook" before she took Boot Camp. In her class of eight students, the skill levels varied greatly. "There were some students who didn't know how to hold a knife and there were others who had been cooking for many years longer than I've been alive," said Jen. She learned "alongside a mom and daughter, an aunt and nephew (this was his college graduation present so he can cook for himself and score a girlfriend), two other home cooks, and a student taking the class through a grant." 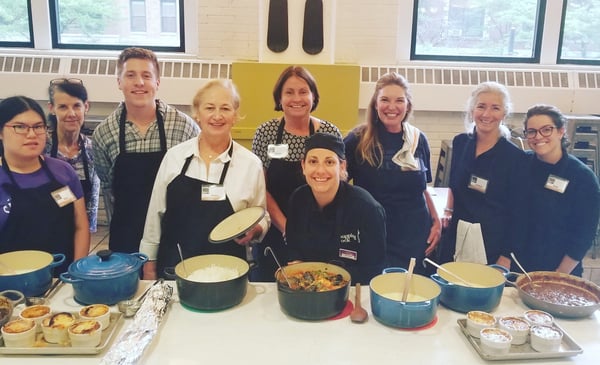 Jen documented her journey on her social media channels, which she says felt like writing letters to home from her bunk bed at summer camp. Her 723K Facebook followers and 354K Instagram followers encouraged her along the way and enjoyed her honest, witty commentary. "I am destroyed for normal food and should probably never go home. What am I going to eat? A SANDWICH? I'm already mad at everyone I live with who doesn't want to eat curried rice pilaf with vinegar-plumped raisins." 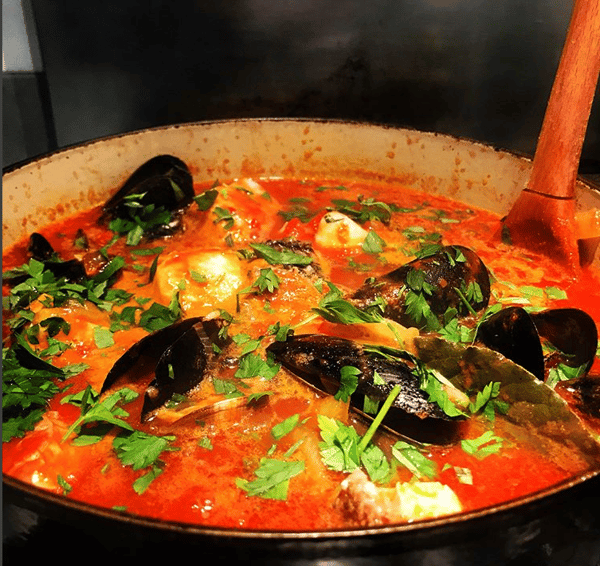 She gave her husband a heads up that essential kitchen tools were on their way to Austin about mid-week through the course. "I NEED THOSE TWO PANS. For the food. And the sauces. I also need that boning knife because I know how to butcher whole animals now, and after 2-4 years, we will have saved enough money buying whole cuts instead of pre-portioned meat to pay for my new boning knife."

For someone who has written a book about avoiding excess in life, Jen struggled a bit with justifying the expense of Culinary Boot Camp and a week in Chicago, but she and Brandon saved for it. "It was totally worth it, and I would do it again." She says it was also incredibly hard to be away from her family for a whole week. "Not a whole lot of women would invest in something they love to this degree, but cooking unlocks a lot of channels for me creatively. It makes me a better mom, writer, host and neighbor. I made an internal decision that taking this class wasn't a waste of time, frivolous or indulgent. It's very rare that I would take that many days out of my life to do something just for myself but it was interesting, fun and vibrant from beginning to end," said Jen.

I don't think she could have said it any better than she did in her Instagram post the day before she started Boot Camp:

"Investing in your own creativity because you love that thing is a wonderful way to come to life. This is our one life, after all. We love what we love; the connected dots don't lie. Maybe we need a few more creatives and makers and builders coming to life, showing up to a week-long course to learn how to break down a duck because the world needs people who both know how to do this and love doing it. We need your paintings and literature and craftsmanship and artistry and music and creative writing and jewelry and design and films and gifts. Who cares if it isn't your career? Some of the world's best things started outside the margins of someone's "real job.” Do what you love and we’ll all be better for it."

Over the course of Boot Camp, students get the chance to work with different chefs throughout the week to expose them to different perspectives and experiences. Jen admits it can be hard to teach a group with such varying levels of cooking skills but that all three chefs they had that week rose to the challenge, and she learned something unique and special from each one of them. "It was great diversity for us," she said.

Chef Mario Scordato laid down a lot of principles for the first day including his catchphrase: "You can always add more." Jen thought Chef Lisa Counts did an especially great job of taking out the "fussy" in cooking. She taught the students to just use what you like, cook it until you like it, and eat it how you want to. "Everything was fixable and adjustable. Lisa even let us destroy a couple of different dishes so she could show us how to fix them and it worked every time. Just like she likes to say, 'It's not the end of the world.'" 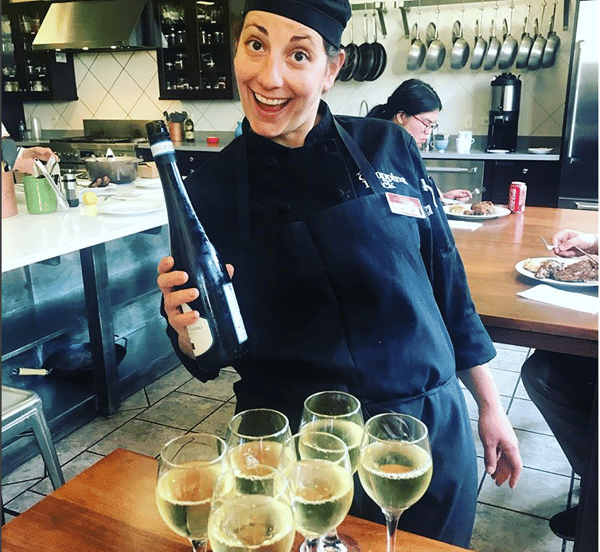 When asked what Jen took most away from her week in the kitchen, she rattled off an impressive list:

Jen immediately made six of the dishes she made during Boot Camp when she returned home, part to practice her techniques and part to show off for her family the dishes she knew they would love such as Coq au Vin, French Onion Soup and the many bright summer salads. "I wanted to cook on my terms, with my pans with my knives and in my kitchen. I had to make sure it wasn't just some magic pill that only works in Chicago but it's not, it works everywhere!" said Jen.

Jen especially loved the curriculum because it was all about learning the techniques and principles, not just following a recipe. She said by the last day of the class, she and the other students were just glancing at the recipe but following the processes they had learned throughout the week. "If I never learned anything else, I could be a pretty good home cook for the rest of my life with what I learned in that one week," said Jen. 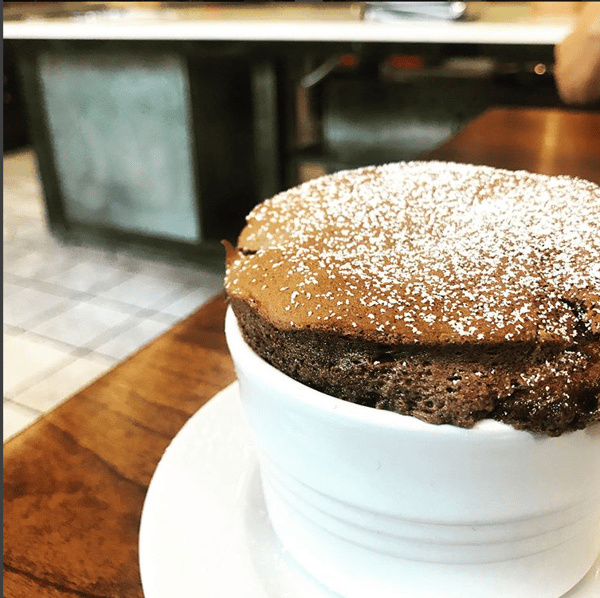 A Cookbook in the Future?

Many of Jen's followers were calling for her to write a cookbook as they watched her journey unfold on social media, something she says that's been happening for years. She has included recipes in her last two books and says she enjoys writing long-form pieces on food that she describes as "part long-rambling commentary, part food recipe instruction. A cookbook would definitely be a side lane to what I normally do, and it would be a fun passion project. I will keep that door propped open, and we'll see what happens". For more on Jen's love of cooking, don't miss her For the Love of Food podcast series featuring Food Network's Aarti Sequeira and Melissa D'Arabian.

Jen has kept in touch with her fellow students via email since the class and looks forward to returning to The Chopping Block next year to take Culinary Boot Camp 2. Her parting note on Instagram on day five summed up her week: "I go home tomorrow full of joy. I can’t help but think it will make me a better wife, mom, activist, spiritual leader, writer & advocate." 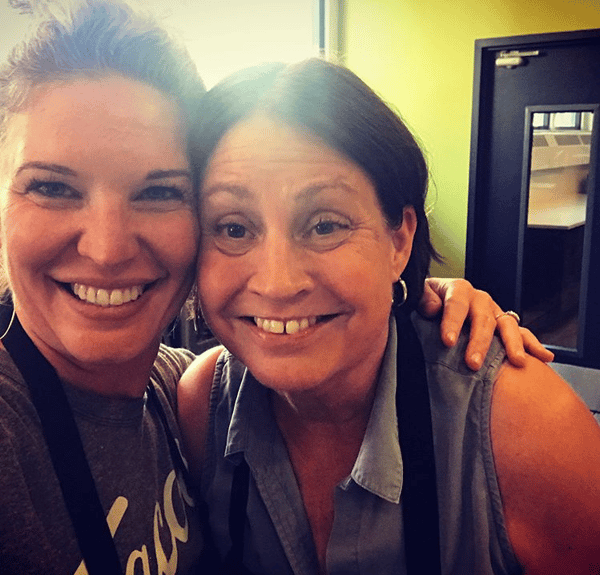 Are you interested in spending a week in our kitchens to become a better home cook and be more inspired in your life? Let us talk to you about how Culinary Boot Camp will change your life.