Building Blocks: Past and Present

When I first started working at The Chopping Block nineteen years ago, I was an assistant to our chefs (aka dishwasher) for cooking classes at our original location in Lincoln Park, Chicago. Some of my favorite classes to work were our Building Blocks series classes which we held on Sundays. These classes were designed to cover the essential cooking techniques all home cooks need to know in order to be successful in the kitchen.

The Building Blocks menus included some of the most classic dishes chefs were expected to master, including many of the same dishes I was learning to perfect while I was attending professional culinary school at Le Cordon Bleu at the same time. Here are just some of the 24 classes we offered in that series:

These recipes are still some of my go-to favorites as evidenced by the wear and tear on them (who remembers the original logo of The Chopping Block where we used vegetables for letters? Now, that's really old school!). 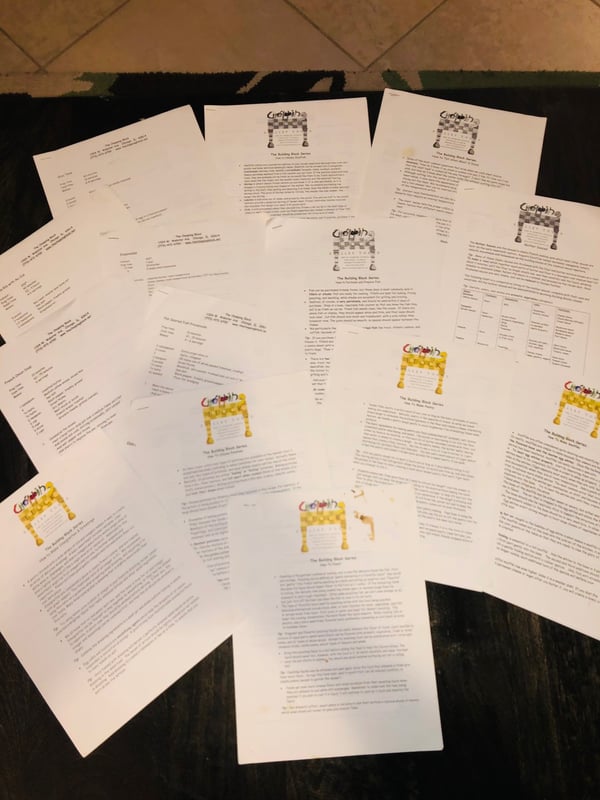 Since then, we've updated the class menus with a modern twist and with our pivot to virtual classes, we've developed a brand new series that we can execute in a virtual setting. That means you get to learn the major techniques of cooking right in the comfort of your kitchen under the guidance of a professional chef!

We first offered this virtual series of classes this past January and February and April and May, and due to its popularity, we are bringing it back for a third round starting in 2022. Here are the nine class topics for the virtual class series:

You can take the classes individually based on your interests or take all nine consecutively, like our student John Lower did in the first virtual series. John isn't new to The Chopping Block. He had taken some classes in our kitchens a few years ago and did his first virtual class in December. He and his 8-year-old daughter learned to make donuts, and he said they had a really good time so when he saw the Building Blocks series on the website, he decided to commit to all nine classes.

John wasn't a total novice in the kitchen before the series, but he felt it was important to go through the basics. "I wanted to learn how to work with fish more, butcher a chicken and make the perfect omelet," said John. "I was especially interested in the sauce class because I didn't know much about sauces. I could really only follow a recipe and attempt to recreate what I saw in YouTube videos."

The Fish Butchery and Cookery class was intriguing to John since he had never worked with whole fish before. "I was able to angle the camera so that the chef could watch and give me immediate feedback on how I was doing. Executive Chef Lisa Counts watched me and made sure I was making the right cuts in the right spots," said John. He says the real-time feedback that our chefs provide in our virtual classes is invaluable. He also loved the ability to ask questions as he went through the cooking process. "How do you know how much oil to put in he pan? How do you know what you are doing rather than just following the steps in the recipe? That's valuable information," said John.

John hasn't stopped cooking the recipes he learned in the Building Blocks series, and says his family now has some new favorites. "The pork class had the most delicious recipes. I just made the stuffed and rolled pork tenderloin with polenta recipe over the past weekend, and it's so good! Even some of the side dishes that are not especially complicated are now in our regular cooking rotation," said John.

When asked if he preferred virtual classes over in-person classes, John responded that virtual might be even better. "You don’t have to go anywhere. You are forced to do everything yourself, so you can’t avoid a single step. Plus, with being in your own kitchen, you aren’t trying to replicate something you learned with different equipment and a different environment. You are learning in your own kitchen. If you have questions about what the chef is using in their professional kitchen, you have that conversation and discuss work arounds if you don't have the same equipment," said John. "The only negative is that there are a lot of dishes to do!" 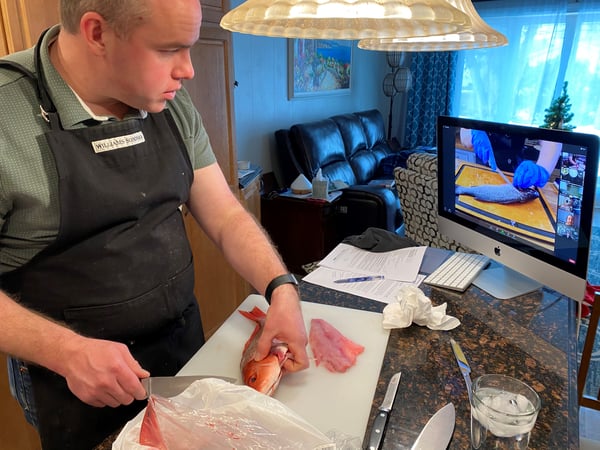 John recommends taking the Building Blocks series because it’s very adaptable to whatever skill level you are at. "The chef would always ask us what we wanted to learn and get out of the class, and she would ensure those skills were covered. For instance, if someone said they wanted to learn how to chop an onion, she would spend extra time on that skill. Since we had small groups, the ability to customize based on our needs was great," said John.

In each menu, we give you the option to cook all of the menu with the chef during class or just the specific dishes you want to eat and watch the rest of the class and cook those dishes later. John cooked every dish on every menu, which he says was an important learning process for him. "I recommend taking the time to do the recommended prep before each class that is included in the recipes so you don't fall behind," said John. He looks forward to taking more virtual classes in the future and thanks to the Building Blocks, now considers himself an advanced home cook.

Are you ready to up your game in the kitchen like John? Our next series of Building Blocks is here! Sign up now to become a better home cook: