How to Craft a Non-Tacky Fine Dining Dish

We are finally past the spring of deception and third winter which means we are inching ever closer to True Spring here in Chicago. That means that even though there is still snow in the forecast, things are starting to pop up, mostly small shoots, buds and fragrant blossoms. This is the moment chefs wait for all winter: when there is finally something new, fresh, tender and delicious sprouting from the earth. It's little wonder, then, that so many menus this time of year are littered with items that seem to reflect the frenzy of capturing this special moment before it’s gone. Nevertheless, just because fiddlehead ferns, ramps, morels, knotweed, dandelions, asparagus, and miner’s lettuce all pop up around the same time doesn’t necessarily mean they belong on the same plate. In my opinion, the best way of focusing the diner’s attention on the bounty of the season is not by cramming it all into one confused dish, but by selecting one of these ephemeral delicacies and building a dish around it to showcase its unique attributes. 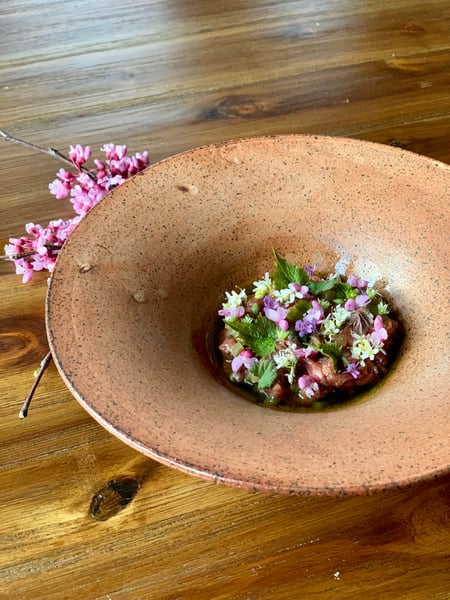 I was riding my bike recently, and I noticed a patch of one of my favorite invasive edibles had just started blooming: garlic mustard. Garlic mustard grows everywhere, and has a very delicious flavor that can be described as a mild cross between—you guessed it—garlic and mustard. Another great thing about this plant is that its insanely abundant, and an invasive species, which means you can harvest and eat as much of it as you want (unlike some other native species like ramps). It also looks pretty with its cute white clusters of pungent flowers, and spiky vivid green leaves. 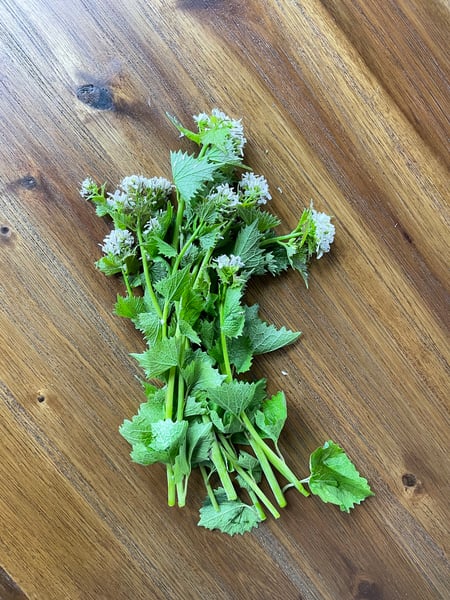 Now, garlic mustard is delicious, but its not really the stuff a main ingredient in a dish is made of; it's more of a seasoning or garnish. It will need something more substantial to help it come into its own. Thankfully, both the flavors of garlic and mustard play very nicely with one of the most beloved spring proteins: lamb. And since the theme of the season is freshness, and garlic mustard is at its best when it's raw, I decided to go for a lamb tartare. When you plan to eat any meat raw, it's best to get a high quality piece of meat from a source you trust. I got my lamb sirloin from The Butcher and Larder in the Local Foods grocery store. They source their pasture-raised animals from local farms and butcher them onsite so you know you’re getting fresh, high quality meat from an animal that lived its life outside. 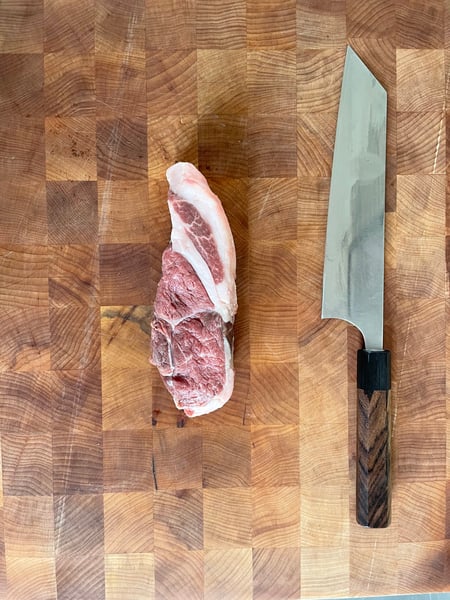 To cut a tartare, you really want to remove pretty much all the fat. A little intramuscular fat is okay, but it's quite unpleasant to chew on a raw piece of un-rendered animal fat. This piece also had some connective tissue running through it, so I trimmed that out as well, and cut the meat into long-ish thin strips. This is slightly less processed than a typical tartare in order to encourage chewing for a little longer than you otherwise might (as the lamb heats up in your mouth more of its savory flavor will come out). 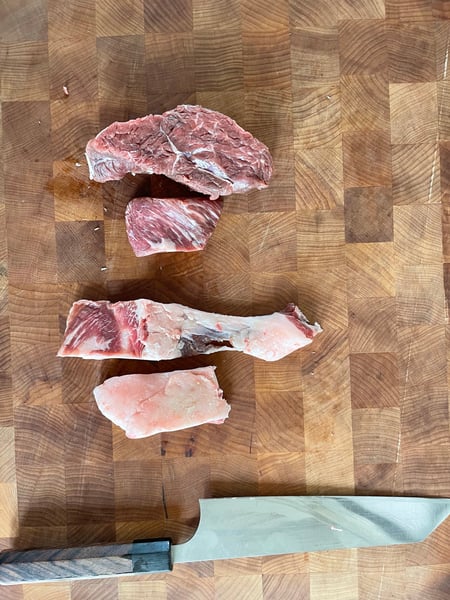 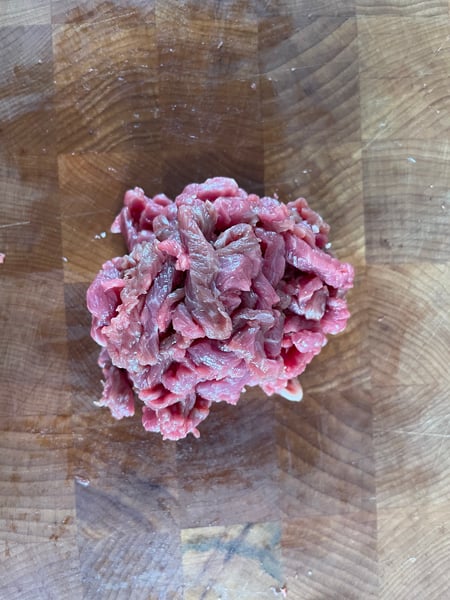 Even though I trimmed off the fat, that doesn’t mean it won’t be part of the dish. Since much of lamb’s flavor comes from its fat, and cold fat doesn’t release much flavor, I wanted to figure out a way of getting some of that roasted fat flavor into the tartare. I decided to smoke and grill the fat, then infuse it into an oil (I couldn’t just use regular rendered lamb fat because tartare is served cold, and lamb fat is solid when it's cold). 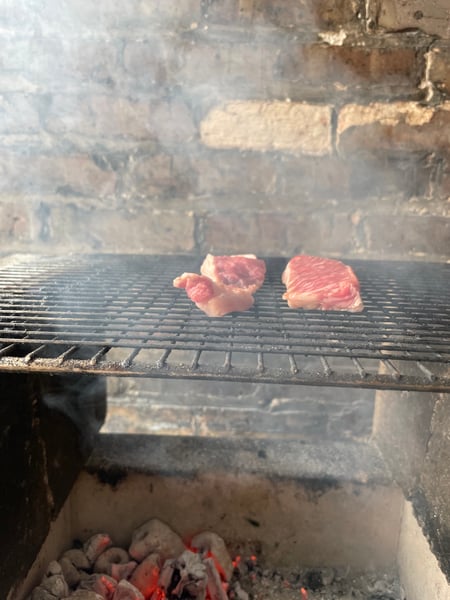 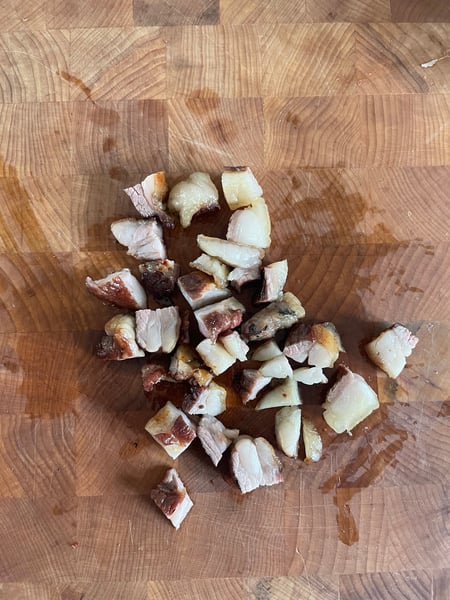 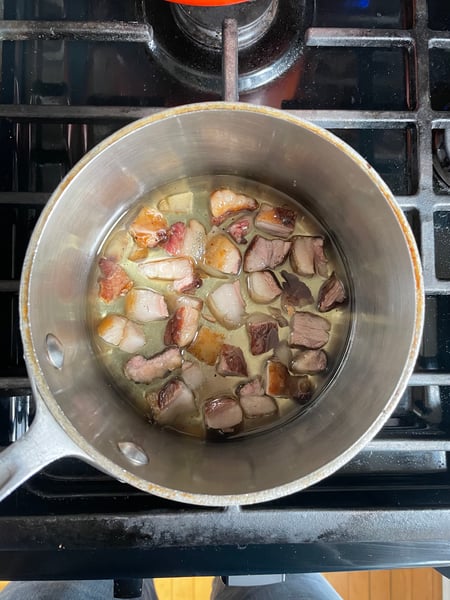 Now that we have our two main components decided on, we can start to think about complementary flavors. Tartare is a rich dish and pretty much always benefits from some acid. In a classic tartare you would expect cornichon pickles to fill this roll, but I wanted something a little more interesting. I decided on rhubarb - another spring stalwart, and one of my favorite vegetables to pickle. The nice thing about rhubarb is it has this wonderful crispy texture when it's raw. Unfortunately, typically when you pickle something the texture is compromised either by heat or by fermentation. You can just let raw vegetable sit in cold pickle brine, but you’ll be waiting for your pickles for a while. To circumvent this I used a technique developed by the smartest man in food, Dave Arnold. In his book Liquid Intelligence he describes how to use a whipped cream canister to cold-infuse liquids into porous solids (this effect is typically achieved with a chamber vacuum). In my case the liquid would be pickle brine, and my porous solid would be brunoise’d rhubarb. 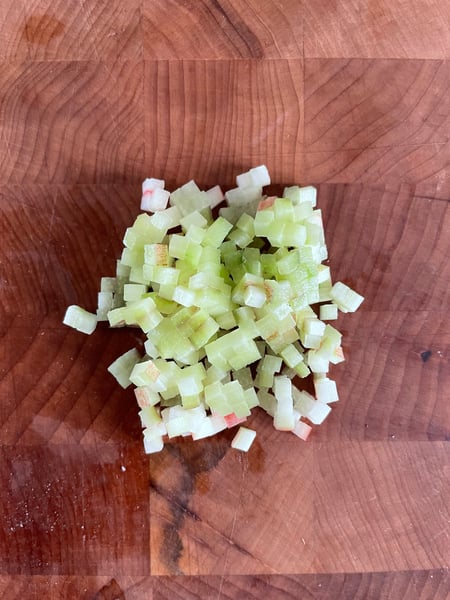 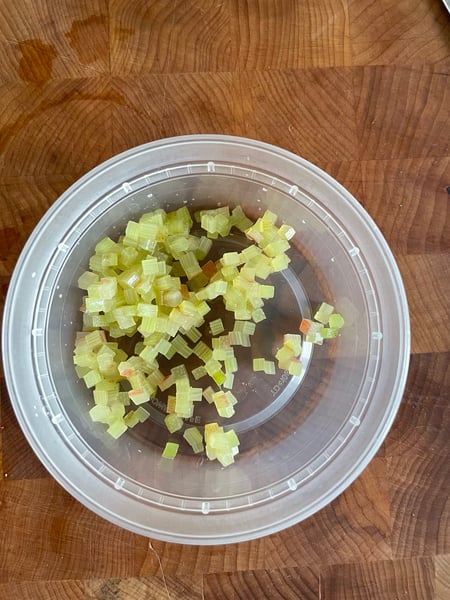 To round out the dressing for the tartare, I decided to use some fermented green garlic I had (to bolster the garlic flavor from the garlic mustard, complement the lamb's slight funk, and add a different acidic character from the pickled rhubarb), along with some absolutely incredible shoyu (think soy sauce) made by my friend Rich Shih from crops grown by one of my favorite farmers in New England, Bill Braun from Ivory Silo Farm. The added umami gained from using shoyu instead of just salt helps make the tartare more satisfying and brings all the other flavors together.

So far so good, but if we look at our flavor profile now ,it's kinda monotonous. Its basically just lamb and garlic. It's really important to keep your flavor profile simple so that your flavors don’t get muddied, but you need a really extraordinary combination to make a dish viable with just two main flavors. Three is typically my sweet spot, and to set this dish off I knew I wanted something pretty aromatic, because lamb does very well with that type of thing. There are a bunch of options for aromatic ingredients that go well with lamb like mint or cumin, but I wanted something a little more interesting. I wanted the dish to come off as light so I didn’t want the aggressiveness of cumin. Mint could have worked, but everyone does mint with lamb so it's hardly exciting. I decided rose would fit the bill quite well, so I took my lamb infused oil, and blended it with a bunch of garlic mustard leaves and some rose petals I had gathered at the end of last summer. I strained the oil and voila: the makings of our tartare were complete. Now we just have to dress, plate, and garnish before we can dig in. I mixed together all my dressing components (infused lamb oil, pickled rhubarb, minced fermented green garlic) in a bowl, seasoning to taste with the shoyu. Once I was happy with the balance of flavors I placed a heaping spoonful of tartare in a chilled bowl and got ready to garnish. 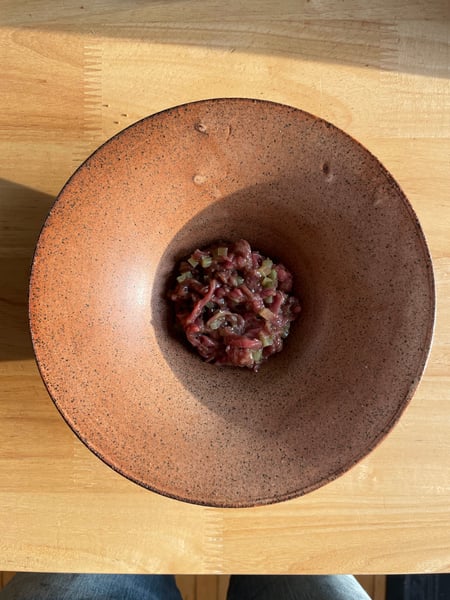 The garnish was the easiest part to figure out (it usually is). Garlic mustard has those cute little flowers and very pretty small leaves. They would make the perfect garnish. Now I know I said this would be a non-tacky dish, and you may rightly be thinking that flowers on tiny fancy food is more dated than a coiffed side-part and skinny jeans (don’t worry, fellow millennials, I still have both those things). But here’s the thing: garlic mustard flowers aren’t just pretty, they’re delicious. Like many herb flowers garlic mustard blossoms have the same flavor as the leaves, but much more intense (if you’ve never eaten a cilantro or arugula flower, do yourself a favor). In my mind nothing that serves a legitimate purpose can be tacky, so go ahead and blast on some garlic mustard flowers on there. 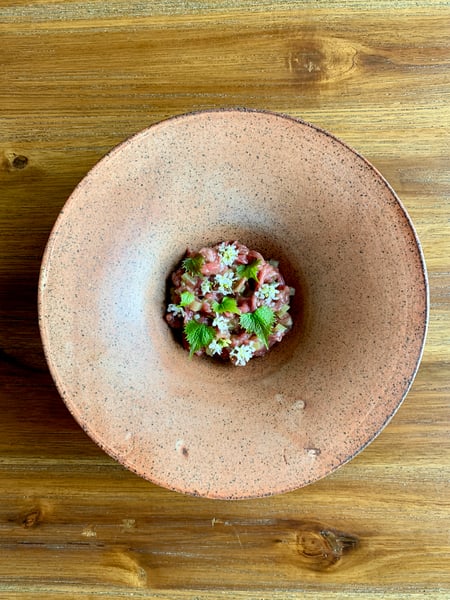 Of course, it's also true that we eat with out eyes first, and in my opinion something that makes the plate look better without getting in the way of any other part of the eating experience is always welcome, so if you wanted to sort of wink at those overwrought throw-everything-my-forager-brought-me-on-a-plate style spring dishes in a restrained and elegant way you could toss every small spring flower you can find on there too like: 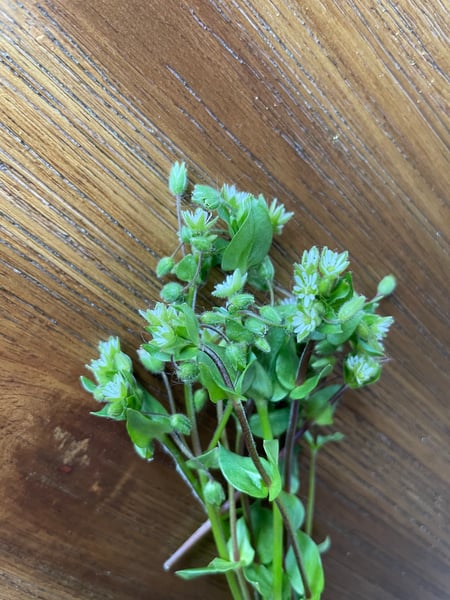 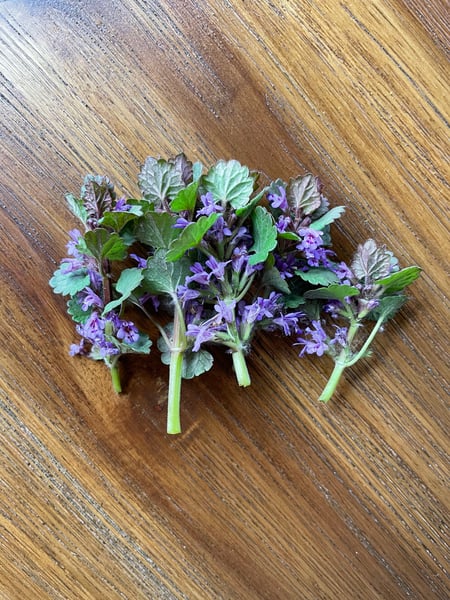 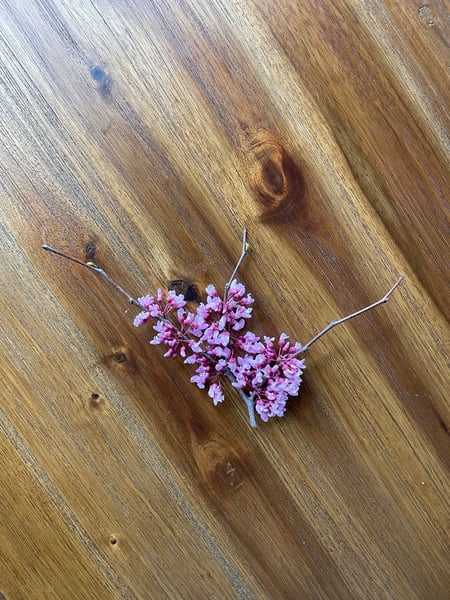 Finish with a bit more of the infused oil around the edges, and there you go, a fancy little spring dish that will make people on Instagram go 🤤 instead of 🙄.

Oh, but when you post it make sure you don’t give too many details about how you made it or what’s in it. Fi-Di menus these days have a shorter character limit than a Twitter post, so you can only call out the most interesting parts if you want to be cool and not lame. Try something like “Raw spring lamb, garlic mustard, rose, flowers of the moment.”

If you found this interesting and want to learn more about how flavors play off each other in a dish, you should check out our virtual Flavor Dynamics class this Sunday, April 25 at 11am CST where you will learn all about how different flavors interact and support or diminish each other.

NB: Whenever you are harvesting a wild plant for the first time, make sure you have a 100% positive ID before eating it. Additionally if you are gathering plants for consumption in an urban area please please please please WASH EVERYTHING before you eat it.