This is the continuation of a two part article about beer. If you missed part one, check it out here.

IPAs and American Pale ales: Pale ales are brewed with primarily pale malts and hops. They have a somewhat bitter flavor and were actually originally referred to as bitters. There are numerous styles of pale ales, the most common being American pale ales and India pale ales (IPAs). 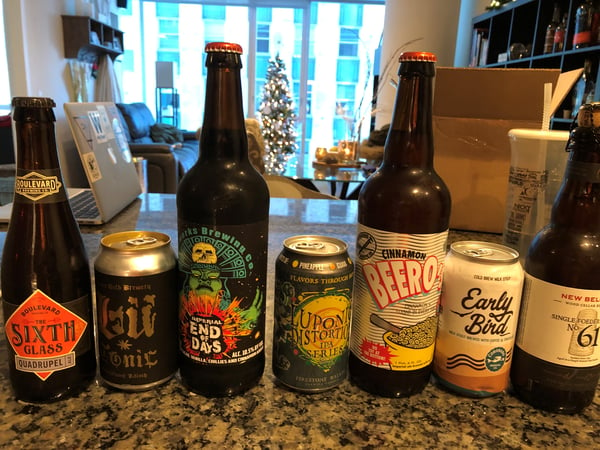 American pale ales have a somewhat even mix of malts and hops, whereas IPAs have a more forward hop flavor due to being brewed wit greater amounts of them. IPAs began as pale ales brewed by Bow Brewery in England and were shipped to India (hence the name). They were no where near as hoppy or alcoholic as they are by today's standards, but the greater amount of hops in the brew allowed them to make the voyage across the sea and maintain their flavor. As for American pale ales, Sierra Nevada brewery was the first to use large quantities of American hops to create this variety in the 1980s, and these beers usually hover around the 5-6% ABV level, and are more mild compared to IPA. American pale ales pair well with a large variety of foods, while IPAs are best enjoyed with spicy or salty foods.

Wheat ales/Hefeweizens/Wits: Brewed with at least 50% wheat. These beers have little to no bitterness as the hops are very low in the mix, and are very smooth. Hefeweizens come from Germany and usually have flavors of spice, clove, and bananas. American wheats have a more doughy, bread forward flavor. Wits are wheat beers with some added flavors, often orange peel or coriander (like a Blue Moon). They pair well with more mild foods like salads, fish and seafood.

Belgians: This style actually encompasses Wits, but also Lambics, Saisons, Dubbels, Tripels, and Quadrupels.  Lambics are spontaneously fermented, meaning that the beers are brewed in open air, allowing other bacteria around to impact the fermentation process (similar to sour dough bread). This creates a funky flavor with tons of variance beer to beer. Saisons are similar, usually not as sour and often have fruit or spices added to them.  Dubbels, Tripels and Quads are variations of Belgian Trappist Ales, which have been brewed by Christian Monasteries for hundreds of years, some of them all the way back to the middle ages. Dubbels are malty and sweet with a caramel flavor due to the inclusion of candi sugar, Tripels are brewed with three times the malt, but use pilsner malt which gives them a lighter color. Quads are more bready in flavor, and often clock in at well over 10% ABV.

Stouts and Porters: For all intents and purposes, stouts and porters are essentially the same thing and brewers often use the terms interchangeably. Porters will generally use malted barley, while stouts use unmalted roasted barley. Both are dark and rich in flavor, with porters often being a bit more bitter and hoppy and stouts being creamier and more coffee forward as far as flavor, due to the roasting of the barley. The term stout was originally just used to describe stronger porters. Nowadays brewers often add milk sugar or oatmeal to stouts for added flavor and complexity, and you'll see them labeled as Milk Stouts and Oatmeal stouts.  Stouts and Porters run the gamut of alcohol content, with dry stouts such as Guinness being relatively mild in flavor and low in alcohol, to Russian Imperial Stouts bursting with chocolate and espresso flavors (sometimes with added ingredients as well) and often clocking in at 10-15% ABV.

Ambers: Ambers generally have an even amount of hops and malt and have a toasty caramel color. They usually have a pretty even flavor and are medium bodied. Yuengling is one of the more widely known Ambers. They pair well with fried and smoked foods.

Pilsner: The most popular variety of beer in the U.S., most macro brews like Miller and Budweiser are classified as Pilsners. They get their name from originally being brewed in Pilsen in the Czech republic. The first true Pilsner was brewed in 1842 by Pilsner Urquell, where it is still brewed today. They are generally very light in color and well carbonated, and pair well with pretty much everything, hence their popularity and drinkability.

Bocks/Dopplebocks: Bocks are strong lagers hailing from Germany. They’re traditionally pretty sweet and strong, usually in the 6-8% ABV range. They are low in hops and not terribly carbonated, and usually have a caramel or bread forward flavor. Dopplebocks, or double bocks, are simply stronger versions of bocks.  They are often in the 7-12% ABV range, and were called “liquid bread” and were traditionally drank by monks when they were fasting and could not consume solid food. Bocks pair well with grilled meat and roasted vegetables.

Marzen/Oktoberfest: A decree in the 1553 in Germany stated that beer was only allowed to be brewed September 29 and April 23, as beer wouldn't keep well in the hot summer months. Therefore beer brewed in March (Marzen in German) would have some added hops and alcohol to help it last the summer months, and whatever was left after those months was served at Oktoberfest. Generally caramel in color and more full bodied than Pilsners, these pair well with German food.

With craft beer continuing to skyrocket in popularity, there are literally hundreds of varieties within these styles, and more being created all of the time as brewers get more and more experimental with their brewing methods and add non traditional ingredients to their beers. This article only scratched the surface on beer, but hopefully it shed some light on them and cleared up any confusion you may have had.

The Chopping Block carries a wide variety of craft beers in many of these styles. Check them out the next time you attend a cooking class. Cheers!