Well it's not ‘new’ exactly, but it's an uncommon fruit you may not have run into before. And not exactly ‘just’ since it was first described in western sources by Phillip Franz von Siebold and Joseph Gerhard Zuccarini in 1843. And not precisely ‘dropped’ either because you harvest them unripe and firm, not after they’ve fallen to the ground. Nevertheless the hardy kiwi (the subject of today’s post) is one of my favorite fruits that grows here in the northern U.S. 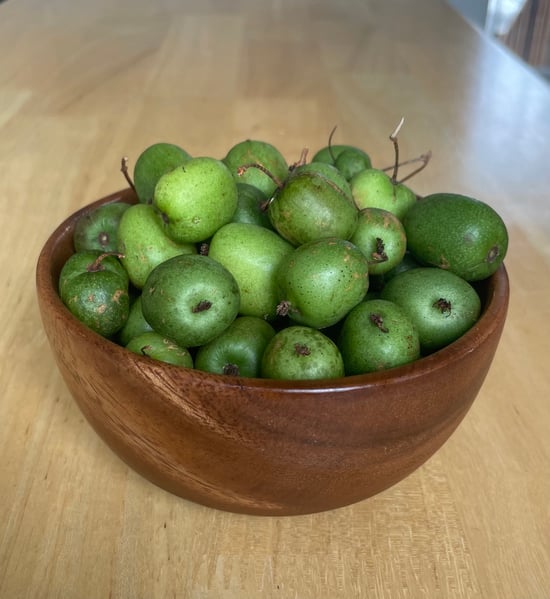 Most people think of kiwi as a tropical fruit, and for the most part that’s true. The kiwi we’re all most familiar with—roughly racquetball sized, hairy on the outside green on the inside—is not particularly cold tolerant, and can only be cultivated up to an agricultural zone 8, but hardy kiwi (also known as northern kiwi, kiwi berry, Siberian kiwi, and a handful of other names) can thrive in climates as cool as zone 3-4 (here in Chicago we’re in zone 5-6). This hardiness comes with a few morphological differences between the kiwi berry and its tropical relative. The most obvious is size, hardy kiwi fruits grow to be roughly the size of a large grape. They also have smooth edible skin as opposed to the hairy outside of a typical kiwi (which is also technically edible, but can be a… challenging texture for many people). Aside from these differences though they look remarkably like a kiwi when sliced open. 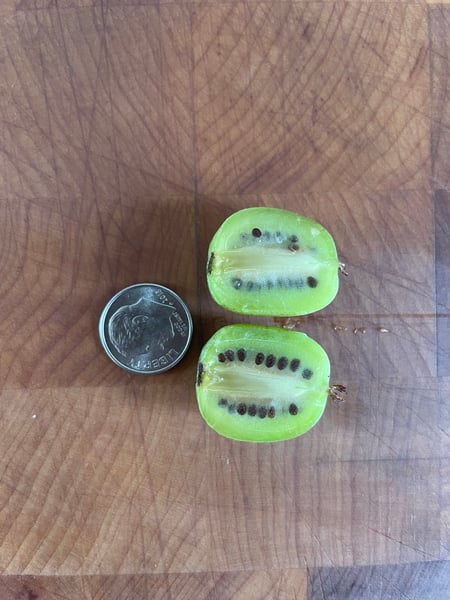 Undeniably very cute. In addition to their cuteness though, these fruits are incredibly versatile. With a headier aroma and more concentrated flavor than their larger counterparts, hardy kiwi is maybe the ultimate snacking fruit. It would also do exceptionally well in a fruit salad, as part of a charcuterie or cheese plate, cooked down into jam, used to glaze all manner of proteins, as part of a fruit tart, filling for donuts, or even as a delightful accompaniment to seared foie gras. 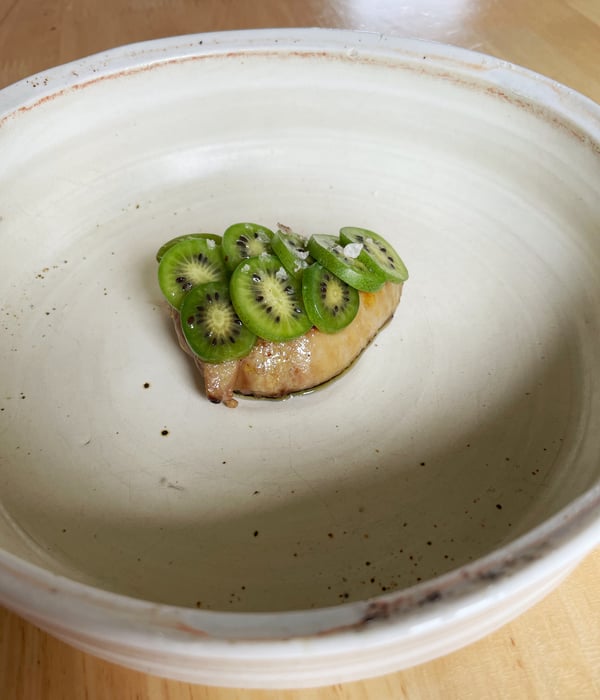 There are a couple things to know about hardy kiwi in order to enjoy them at their best. The first is that they are a fruit that is harvested before it is ripe and is allowed to ripen off the vine. Though they are perfectly edible when they’re on the firmer side, they riper they become the stronger and more complex their aroma becomes and the sweeter they get. Firmer kiwi berries will be starchier in texture and grassier in flavor the firmer they are. For the best flavor wait until they are soft. Like… really, really soft. Like “I think this might be rotten” type soft. When gently pressed with the tip of your finger a ripe hardy kiwi will deform easily, and won’t bounce back to its original shape after, as in the photo below. 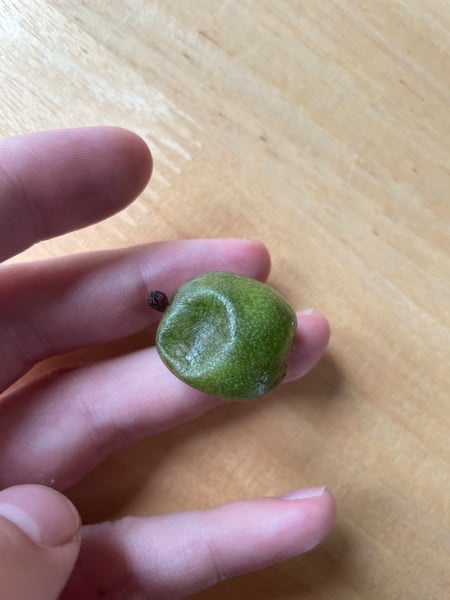 This is the main reason they are picked firm and allowed to ripen off the vine; trying to pick tiny kiwi that are all but falling apart in your hands is a demoralizing and messy proposition. Thankfully, unlike other fruits like tomatoes, you aren’t compromising the quality of the product at all by picking them unripe.

The second thing to keep in mind is that almost all the acidity in the fruit is located in or right below the skin. If eaten whole, I think the acidity is necessary to balance all the sweetness in the flesh, but if you have an application that calls for a sweeter or more acidic fruit just know you can control these attributes by removing or including the skin.

If you’re intrigued and would like to learn more about how to incorporate this and other unfamiliar ingredients into your cooking, the best way to do that is to understand how to dial in, pair and manipulate flavors by checking out our upcoming Flavor Dynamics class. You can choose to take this class in-person at the Merchandise Mart or join us virtually from home. It's one of our new hybrid class options!