Pigs Heads are Not for the Faint of Heart

There is a distinct possibility that I am a little too obsessed with pork. In my tiny little Chicago apartment, I have a curing cave for making cured meats (mainly pork). I recently pulled out a prosciutto that I had been hanging for 3 years. So, I was looking for a project.

Luckily, we had a whole hog class at the Merchandise Mart last week where a whole pig was butchered into traditional cuts. After everyone took their favorites, I was left with a tray of… parts. There was just no other way to describe them. I jumped for joy. I love eating offal but I have not had a lot of experience cooking it. Here was my new project. And boy did I choose a doozy. I had the head, a part of the spine (with the tail attached) and two trotters. I decided to make head cheese.

For those of you who have not heard of head cheese (or have, but don’t know what it is), it is not cheese. There is actually no dairy involved. It is simply like pate, made with head meat, usually pork. There is a high concentration of gelatin that comes out of the skull when you boil it that you then use to “glue” the meat together. After an extensive recipe search of both my go-to cookbooks and online, I decided a mish-mosh of these recipes was the way to go. I started with a brine. I used a mixture of salt, curing salt, sugar and water. I then added bay leaf, mustard seed and whole cloves. I soaked the head in the brine overnight in my refrigerator (which did require some maneuvering). 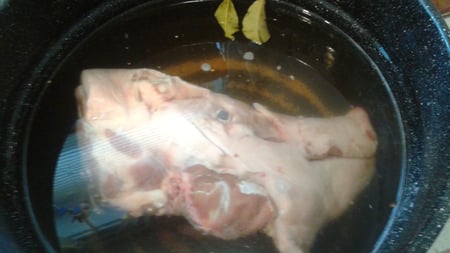 After allowing the flavors to get into the meat overnight, I then placed the head and all the other “parts” in a pot with onion, celery, carrots, leek tops, garlic, peppercorns, bay leaf, cinnamon sticks, coriander seed and cumin seed. I covered it with water and started boiling away.

As it started boiling, I did have to skim the scum periodically. 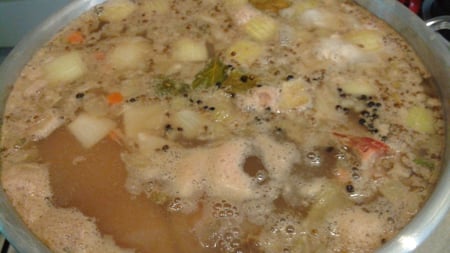 After about 8 hours (yes, 8 hours), I pulled all of the pieces out. This was harder than one may have imagined, as the meat was now so tender, it wanted to keep falling off the bones. But I pulled it all out. Then I strained the rest of the aromatics out of the stock. I was left with this: 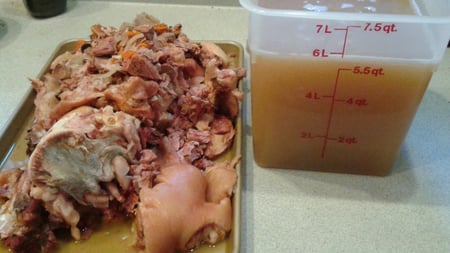 I picked through the meat and put the bones back in the pot with the stock to reduce it further and really develop the gelatin. I had to move to the same test you use when making jelly: keep a plate in the freezer and place a small amount of stock on it. Back in to the freezer it goes, and when it turns solid, you are done. This took about another hour. I seasoned it with salt and set it aside (reminder – as things chill, they lose seasoning, so it needs to taste a bit too salty). After that, I took the meat that I had picked, seasoned it with cumin, coriander, salt and pepper and used it to create the pate. 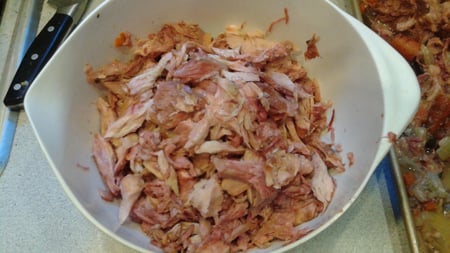 Since I did not have a terrine mold, I just used a standard loaf pan. I lined it with plastic wrap (with overhang – important later) and started layering the stock and the meat. Some people prefer more “jelly” to meat, though I prefer mainly meat with just a little stock to hold it together. 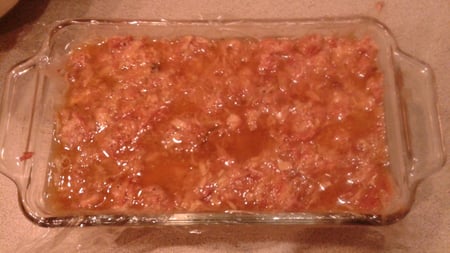 I then laid the overhang of plastic over the top of the meat and placed heavy items on top (I used an olive oil bottle that was squared off and fit perfectly) to weigh it down. I then refrigerated overnight. The next day I pulled it out and had this lovely piece of charcuterie… 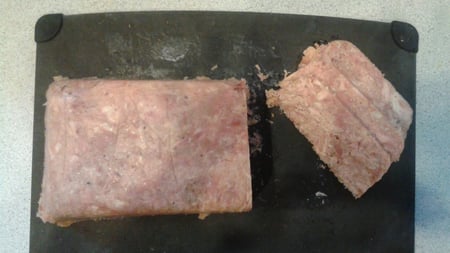 Twelve hours, lots of bones and a new experience later, I’m in heaven. A little toasted bread, a little whole grain mustard… you need very little else in life. But admittedly there were some moments that even I thought “wow – I’m handling an odd part of an animal right now”. It was definitely not a project for the squeamish or the faint of heart. There is a lot of handling delicate parts that not everyone is cut out for.

Luckily you do not have to go through all of this trouble to have delicious homemade pork products. There are still some seats left in The Chopping Block's upcoming sausage-making class, Just Encase: Sausage-Making Basics. I will be showing how to make sausages for the upcoming grilling season in this cooking class. And none of the different varieties require this level of dedication, only a little bit of time and a meat grinder. Come share my love of pork!