One of my earliest memories is visiting my grandmother in northern Louisiana at Christmastime. She lived in a rural town with just one stoplight. Every year, we'd make the trip "to town" to watch the fireworks over the Cane River and eat meat pies in Natchitoches. In fact, we're making the trip again as a family this holiday season for the first time in a very long time so my nephews, who live in New Zealand, can experience this tradition. They'll probably like the fireworks, but for me, it's all about the meat pie. 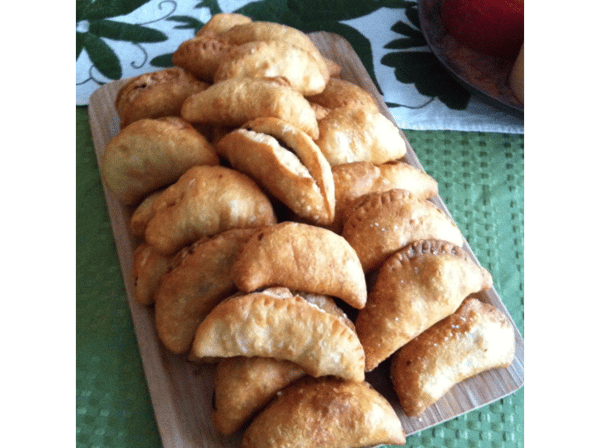 A traditional pie has a savory meat filling in a crescent-shaped, flaky pastry turnover, similar to a Spanish empanada. My mom would only make these at home for very special occasions due to the amount of "trouble" they are. When I asked her about them recently, she reminisced about her and my aunt making them together years ago. As they grew tired of making the pies, the larger the pies became in an effort to use up all of the dough and filling.

Scoffing at my mother's claim of being too much trouble, I decided to do something different and make these pies for a Labor Day party. Wanting to make the authentic recipe rather than some online version, I requested the recipe from my mother. I was shocked to find it came from "Meats 2nd Edition: Favorite Recipes of Home Economics Teachers". I was even more shocked when I actually read the recipe as it had been years since I looked at it. It was a shell of a recipe at best, missing steps, amounts of ingredients and obvious errors in methods.

This made me think about how much recipes and cookbooks have changed over the years. This book was published in 1962, long before test kitchens and beautiful food photography were a part of every reputable cookbook. In this case, I knew I could trust my cooking knowledge rather than the recipe. That's something we try to teach home cooks every day at The Chopping Block. Trust your instincts to know you don't have to follow a recipe to the letter. In fact, that will often get you in trouble.

Here's my doctored version of the recipe:

Make a roux of the 1 T butter and 2 T flour by melting the butter in a saucepan and adding the flour while constantly stirring until light brown in color. You want to cook out the raw flour taste, without letting the rouxt burn.

In a separate medium skillet, cook the beef and pork with onions and leeks until thoroughly cooked. Add the roux which will absorb the fat from the meat and thicken the filling. Add parsley and Tony Chachere's seasoning to taste. The spice level should get your attention but not be too overpowering. Let cool.

Sift the flour, salt and baking powder in large bowl. Mix eggs, melted butter, melted shortening & milk together. Add to the flour mixture and stir to combine. Turn out on a floured surface and knead dough by hand for about 5 minutes until smooth. Divide into two pieces and roll each out to 1/8" thickness. Cut circles of dough, using a biscuit cutter (or whatever round object is the size you want the pies to be).

Fill one half full with meat mixture, fold dough over and seal tightly. Dampen edges with water and crimp edges with fork. 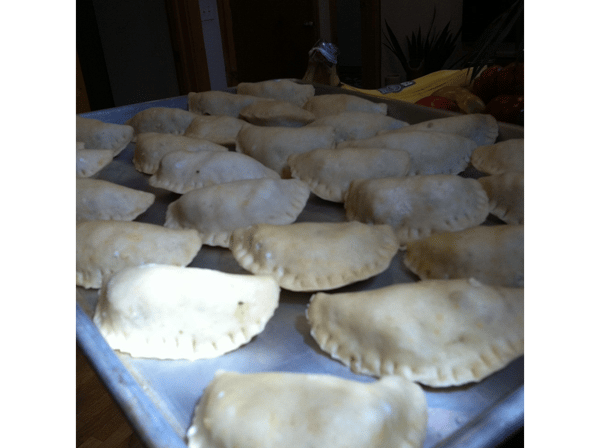 Heat oil in heavy pot until 350 degrees (use a candy thermometer to monitor temperature). Fry in batches until golden brown. Sprinkle with salt as they cool on racks.

Makes 36 pies using a regular biscuit cutter. The pies may also be baked, but what fun is that?