When I was planning my recent trip to Alaska with friends, food wasn't too much of a consideration outside of one or two restaurants that we were told we must hit. I know that may come as a shock since I typically plan my trips around local fare, but in Alaska, there were mountains, glaciers, bears, whales and sled dogs to see!

So, it was a pleasant perk of an already amazing trip to encounter great food along the way, including lots of seafood (my favorite), and a few outstanding gems worth sharing. My friends and I traveled through the Kenai Peninsula which is 90% wilderness and home to the famed Russian River where you can find some of the best salmon fishing in the world.

After flying into Anchorage, we traveled to Seward for a couple of days for hiking (including hiking a glacier!) and a whale watching tour where I got to hold a piece of a glacier and then drink a margarita made with it. 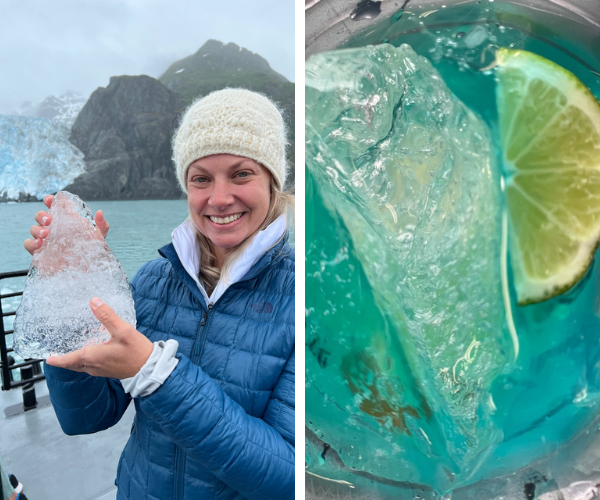 We moved on to Homer for three full days of bear watching, paddle boarding and biking to a small town called Seldovia where I had some delicious cod tacos at the Linwood Bar and Grill. 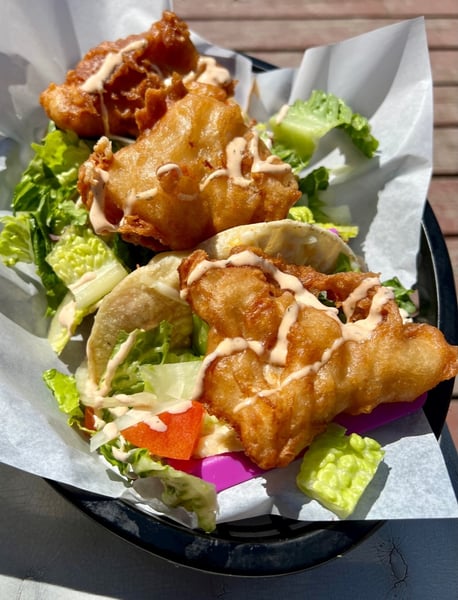 In Homer, we celebrated my friend Margaret's amazing accomplishment of stand up paddling in all 50 states (the reason for the trip) with a celebratory dinner at AJ's Steakhouse where we feasted on clams, black cod and halibut. 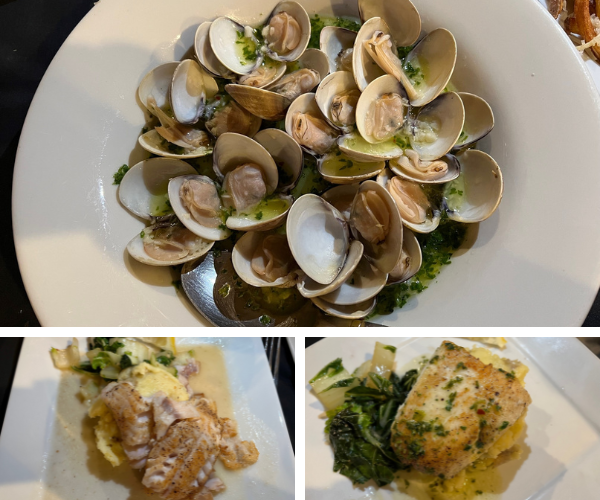 It was here that we learned an important lesson. I knew I had to eat some Alaskan red king crab on this trip and the menu listed "market price" for the appetizer, which is common for restaurants for proteins that tend to fluctuate in price. Living in Florida, I see this all of the time with certain types of seafood, but I don't usually pay much attention to it. I thought: I'm in Alaska so I have to splurge! I figured it would cost maybe $40-$50 since everything is more expensive in Alaska, but when the bill came, my friend pointed out that the appetizer alone cost $145! 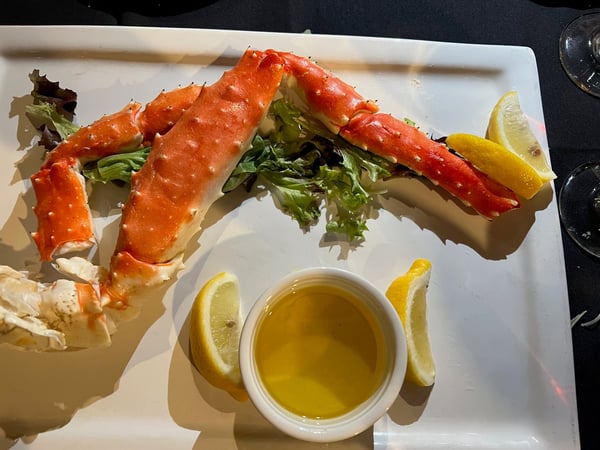 Of course, it was delicious, but was it worth $145? That's a stretch... even for me. After that, I was on a mission to poll pricing for king crab wherever we went and found that it wasn't just AJ's charging an exorbitant amount. Here's the menu at Captain Pattie's Fish House, another restaurant in Homer.

We asked the server if people really ordered the three pounds for $240, and she said they do - in fact, all of the time. You may think this is a tourist trap, but king crab is actually going for nearly $180 for two pounds right now. The reason it's so expensive is because of supply and demand. It's wild caught, and the season lasts just six weeks. Fishermen want to catch king crab right before they molt so the meat completely fills the shell, and Alaskan red king crab are caught in the Bering Sea. If you've ever watched Discovery Channel's Deadliest Catch, you can understand what an undertaking this is. The documentary series reveals the mortal perils that fishing crews face to catch the delicacy, including 40-foot waves, 700-pound crab pots that can easily crush a human and freezing temperatures around the clock.

It was at our third stop in Halibut Cove that I found the restaurant of my dreams, and it's a good thing I fell in love with the food, since The Saltry is the only restaurant on the island!

Halibut Cove is only accessible via boat or plane and is a beautiful, quiet paradise. There are no cars or roads. Originally a fishing village, Halibut Cove is now home to several artists. One of the only floating U.S. post offices is here and the official population in 2020 was just 60 people. Local men and women fish commercially for salmon, halibut, or cod, and others maintain the three active oyster farms. There are also a number of artists in the Cove, and it’s not unusual for a resident to be both artist and commercial fisher. 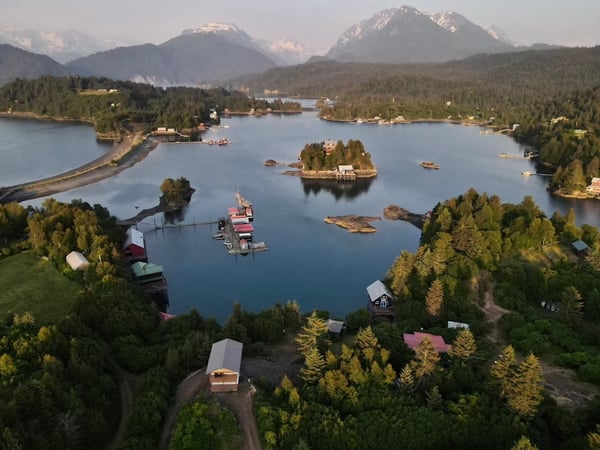 Located on Ismailof Island in Halibut Cove, Alaska, The Saltry Restaurant opened in 1984 with the mission statement - art on the face of the wilderness and fine dining. At its inception, the Saltry provided simple fare: drinks at the bar, hot chowder, fresh bread and cold appetizers - such as pickled salmon - that are still on the menu. Today, the Saltry serves about 100 people everyday during the summer season, most of who come over from Homer via the Danny J ferry, and with decidedly more upscale food. 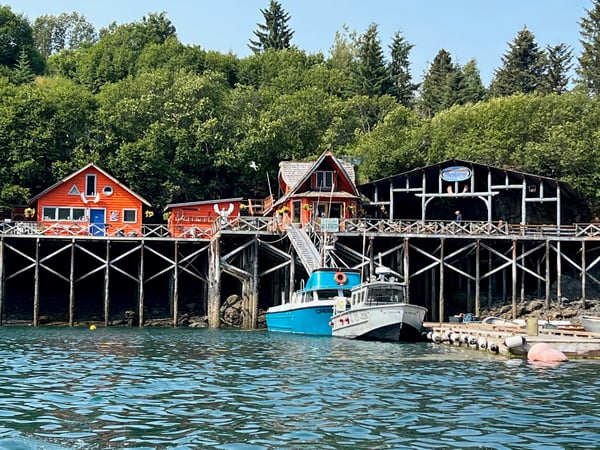 We were lucky enough to run into Executive Chef Tim Boberek in the morning while he butchered fish, and he was kind enough to share what life is like on a remote island in Alaska in the summer. This is his fifth year as the chef at The Saltry, and he lives in the Salt Lake City area during the winter (most of the people we met are dedicated snowboarders and skiers who work winters at ski resorts in the lower 48 - i.e. the continental U.S.). He works about 80 hours a week and comes up with all of the dishes on the menu, except for a few that have been on there since day one, almost 40 years ago. 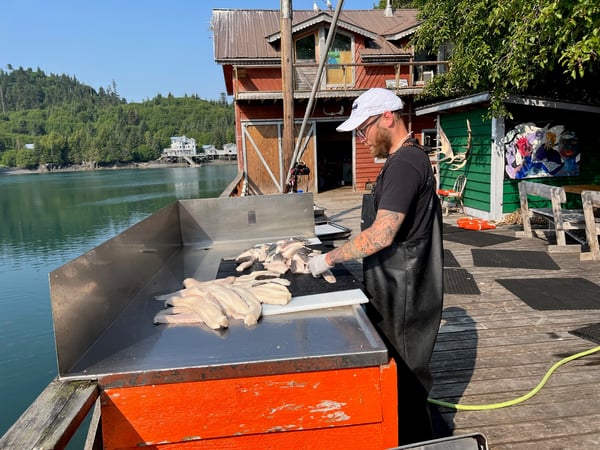 Among those dishes are the House Pickled Kenai River Sockeye Salmon with lemon and onion. Chef Tim says they salt the salmon for an entire year, then soak it for 24 hours in white vinegar before transferring to a pickling liquid with layers of onion to build flavor. The firm, nose-tingling pickled salmon is made from a local strain called China Poot, whose flesh glows a deep orange-red.

The third original dish on the menu (and the recipe of the restaurant's owner Marian Beck) is a tall Callebaut Chocolate Cheesecake with the top-quality chocolate (the same we carry at The Chopping Block) imported all the way from Europe. Chef Tim says some of the challenges of being a chef in a remote place are ingredient availability and the present labor shortages. He even has to special order wheat flour in order to get it on the island.

Everything else on the menu is Chef Tim's creations, and all of the proteins are sourced above the lower 48 (a term I heard often on this trip). He makes use of the rhubarb that is grown on the island and sources vegetables and greens from local farmers markets in Homer. Here, he butchers black cod for the evening's dinner service. 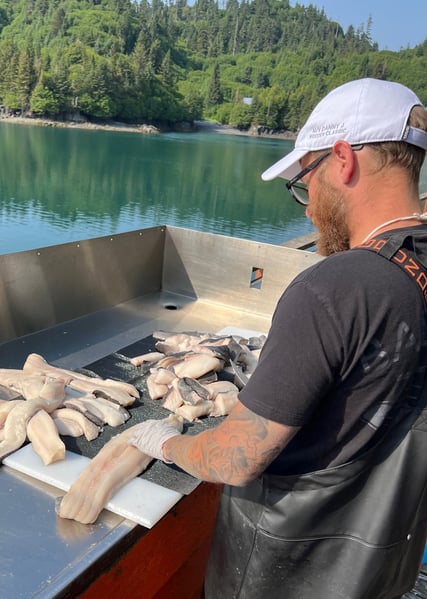 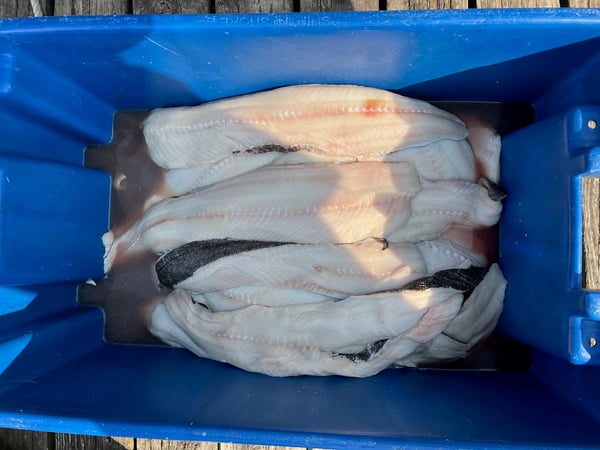 Since we had three meals at The Saltry, we were able to try just about every dish on the small menu, and each meal gets off to a delicious start with fresh baked whole grain bread. 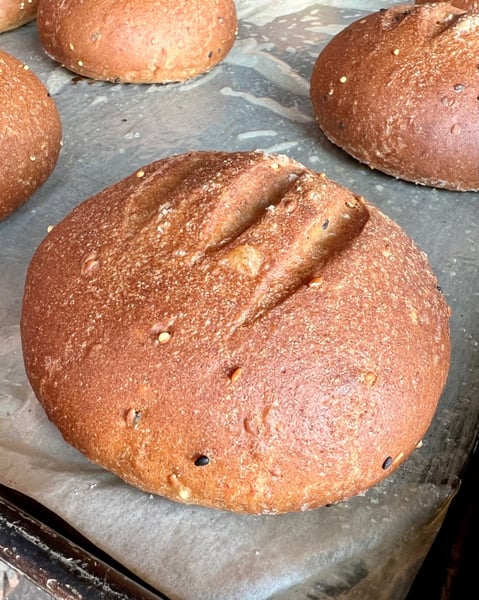 For my first dinner, I had black cod with carrot butter, cauliflower and broccolini. Chef Tim told us that the carrot butter takes 12 hours to make so I made sure to lick every bit off the plate. He roasts the carrots, then boils them, then blends them with brown butter solids. 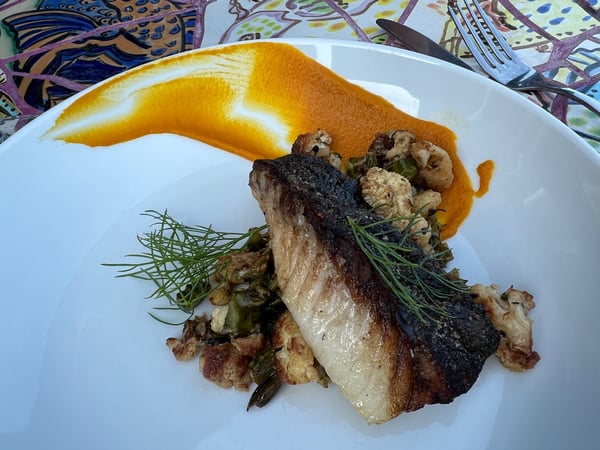 For our second dinner, we sampled the oysters that come from the cove where the mouth of a glacier feeds sediment right into the farm.

We tried the Saltry Chowder with smoked cod, potato and bacon, and it was the only chowder we had in Alaska that wasn't creamy. It was a nice change of pace! 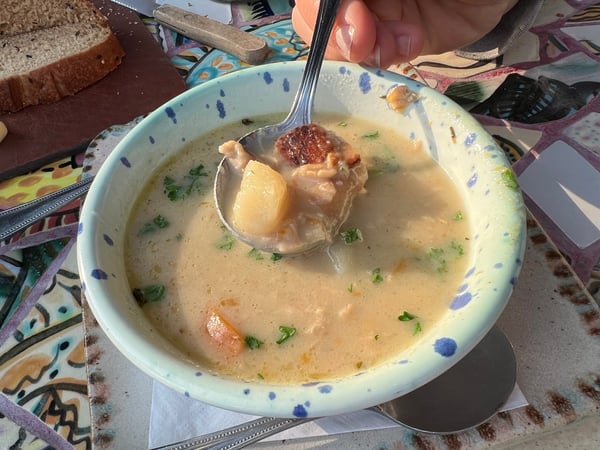 Next up was a beautiful beet salad with lemon, dried apple and ricotta. 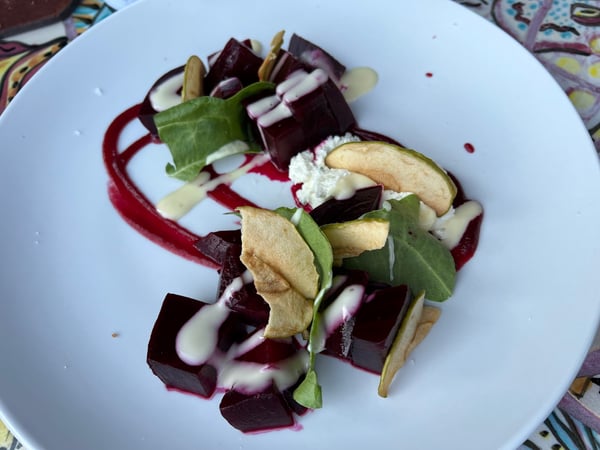 For my entrée, I chose halibut with parsnip, fennel and chives and the addition of scallops. Chef Tim said he usually cooks the fish in his immersion circulator and then sears it, but his equipment recently broke so he's pan frying the fish now.

Halibut is a large, flat fish in the flounder family that can grow as large as 500 pounds and over 15 feet in length. Its firm texture and mild, sweet taste makes it a popular choice among seafood lovers. At home in Florida, it's typically over $30/pound even at the wholesale market, so I made a point to eat as much halibut as I could on this trip. 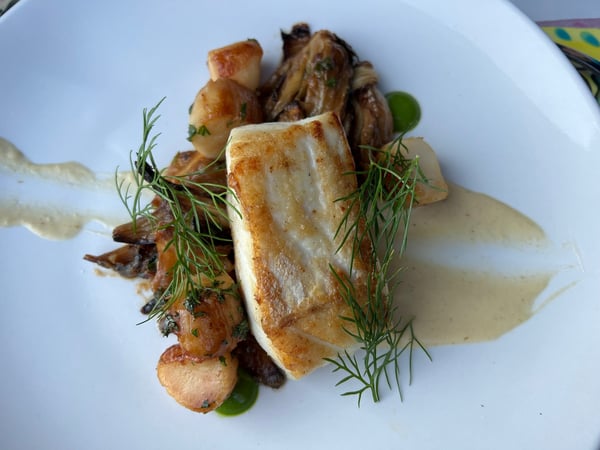 As you can see, the food at The Saltry is absolutely delicious. We were lucky to be able to have three meals there. Unfortunately, I have no pictures of the lunch because my phone was charging at the coffee shop while we ate. Our remote lighthouse came with great views, but no electricity or running water. Not a problem since it doesn't really ever get dark in the summer in Alaska! 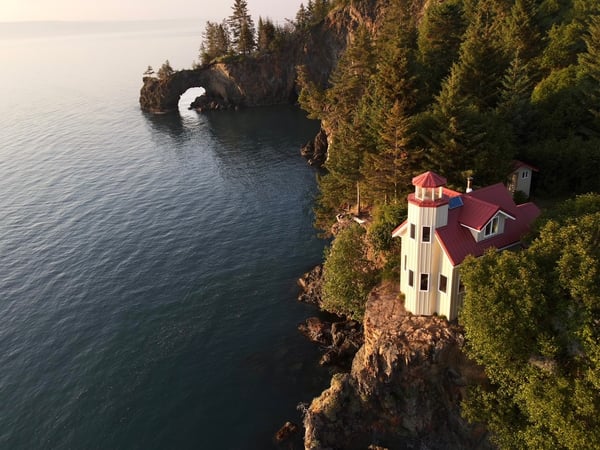 I thought this illustration in the coffee shop accurately illustrates life on Halibut Cove for a business owner. 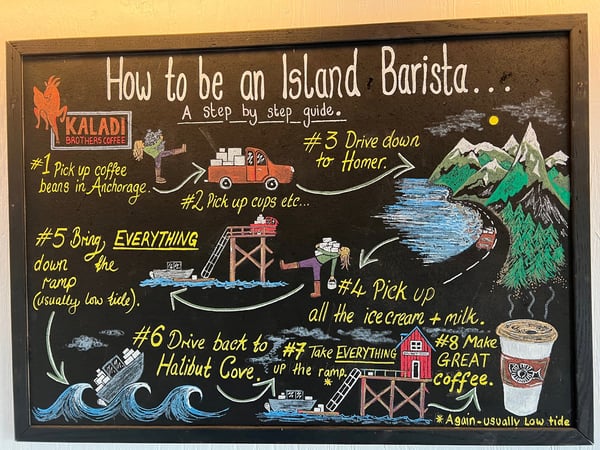 After leaving Halibut Cove, we headed back to Homer for a quick breakfast at La Baleine before hitting the road for Hope. I thought it was appropriate to get the Musher's Meal since we would experience a sled dog training session the next day. They serve this dish every year to Iditarod mushers at Mile 198 along the trail. If you aren't familiar, the Iditarod is an annual long-distance (1000 mile!) sled dog race run in early March in Alaska. I bet the mushers enjoy this cumin-scented corn tortilla with black beans, brown rice, reindeer sausage, two eggs, Manchego cheese, fresh salsa and pickled red onion as a hot meal during a cold day. 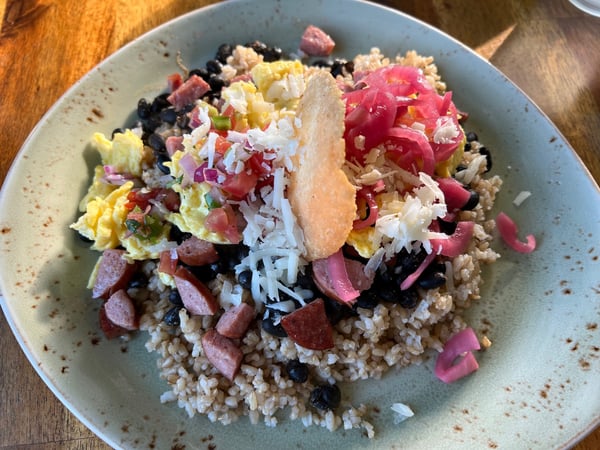 We ended the trip in Anchorage with the last of our local beers and lunch at 49th State Brewing Company. Just like the food, the beer in Alaska was surprisingly impressive. I didn't have an IPA that I didn't love! 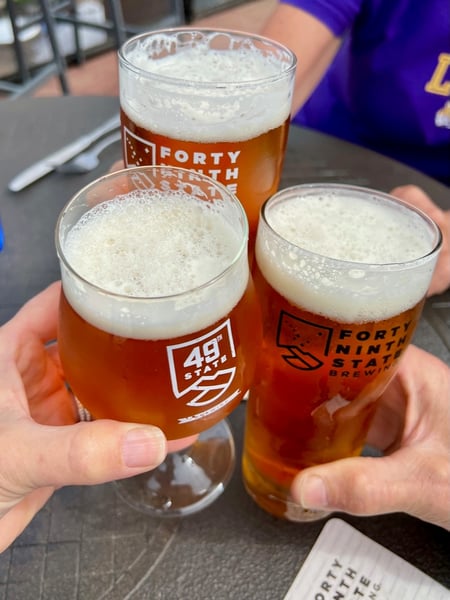 Of course, the trip would not have been complete without a visit to Wild Scoops and a handcrafted Baked Alaska waffle cone. I want to have a summer party soon and serve these as dessert! Just fill waffle cones with your favorite ice cream, pipe marshmallow fluff on the top and torch. 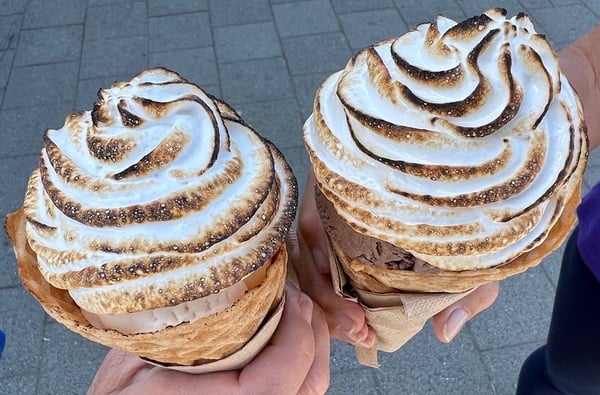 I can talk for days about all of the amazing adventures I experienced on this trip, but I wanted to share my food highlights with you in case you ever get the opportunity to visit Alaska.

One of the things I love most about traveling is exposure to new experiences and foods. If your summer travel plans mostly consist of staycations, we offer a wide variety of classes at The Chopping Block to transport you to faraway lands and cuisines. Don't miss these upcoming classes:

If you are ready for an international adventure, don't miss our Basque Country Culinary Immersion tour in September with Chef Guillermo Delavault. This one sounds like an eating and drinking dream for any beach lover!