A Cherry Cocktail to Delight the Senses

The last year (or so) has been unique in so many ways. Most of them are bad ways. Pretty much all of them. However, one of the good things was that many of us found ourselves with enough free time to start new expensive hobbies. Since I also found myself in need of a drink more often than usual, and because the places I used to be able to procure said drinks were closed either temporarily or permanently (RIP Bad Hunter, California Clipper, and many many others), I decided to take up the task of cocktail making myself. There was a bit of a learning curve, but I was actually able to do a decent job of meeting the imbibing needs of both myself and my fiancé (oh I got engaged, that was another good thing that happened).

After working my way through some of the basics, I decided to try my hand at making my own cocktail spec (a spec is what fancy cocktail people call a recipe). I am a longtime fan of cherries and cherry-flavored things. In fact, my entire family is a cohort of certified benzaldehyde freaks, so when I was flipping through my copy of Meehan’s Bartender Manual and saw a cocktail called a Rose which was based on Dolin Blanc vermouth and a cherry eau de vie, I decided to do a little tinkering to make something a little more cherry focused.

The original spec (see?) calls for raspberry gomme syrup, but since raspberries don’t taste like cherries I decided to swap that for a bar spoon (a measure we will cover again later) of the syrup from my Amarena cherries (which definitely tastes like cherries). I also decided to opt for the king of all cherry eaus de vie: Kirschwasser from the black forest.

This cocktail is quite simple as it calls for just three ingredients (well four technically, but two of them come out of the same jar), and is relatively low ABV since the bulk of the drink is Dolin Blanc which clocks in at just 16%. It is also incredibly refreshing in the summer, and appropriately minimal and contemplative in the winter. This is a year-round drink, folks. Here we go. 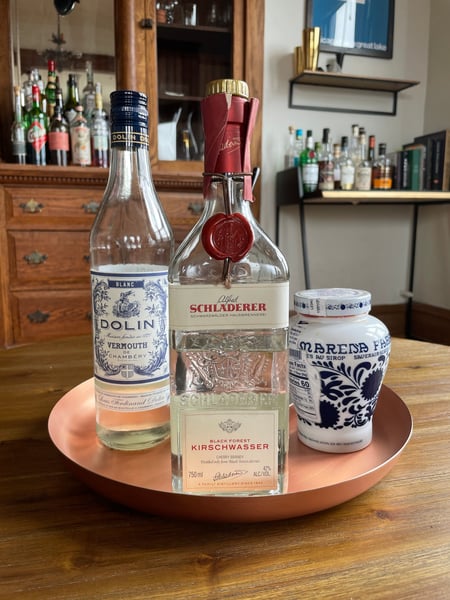 Chill a 5 oz Nick and Nora glass (which is somewhere between a martini glass and a coupe), then measure the Dolin, Kirsch, and cherry syrup into a mixing vessel. Remember when I said we would come back to a ‘barspoon’? Well, it's this much: 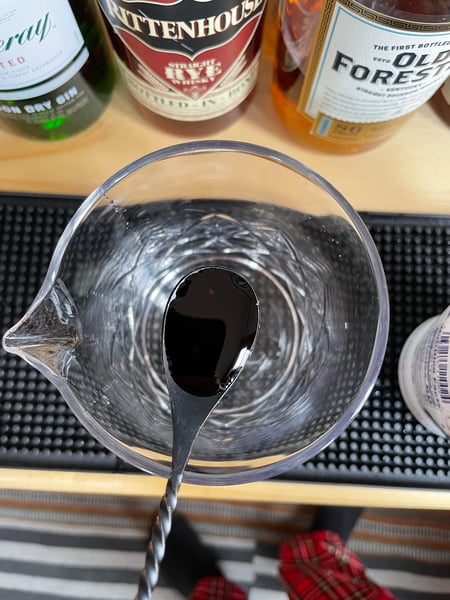 Literally as much as you can fit on one of those fancy twisty mixing spoons. If you don’t have one of those, it's also roughly a 1/2 teaspoon.

Add ice to your mixing vessel (I use about five cubes), and stir for about a minute to achieve proper dilution.

A quick note on ice: you can see in the above photo that I have a Ziploc bag full of ice. This is because I don’t have an ice maker in my fridge, and haven’t yet gone so off the rails that I own a countertop ice maker. I just have one ice cube tray. If you are like me and have to suffer through making cocktails with just one ice cube tray then do yourself a favor and start collecting a cache of cubes in your freezer.

A quick note on dilution: Some people seem to have a negative connotation associated with the concept of dilution (i.e., a more dilute drink means less ABV which is somehow a bad thing, because who drinks alcohol for flavor right?), but in cocktails proper dilution is absolutely essential in order to bring the drink into balance. A drink diluted too little will be overly sweet, overly sour, and worst of all, it will be too warm. Why warm? Well, to dilute the overwhelming majority of cocktails you will use ice. If you are chilling your drink with ice, then chilling and dilution are inextricably linked. There is no chilling without dilution, and there is no dilution without chilling. Thus by stirring our cocktail for the right amount of time we can ensure it is both properly chilled and properly dilute.

“But, Max” I hear you protest. “If proper dilution is so important, why do you mix your cocktails in a big heavy mixing glass? Doesn’t that mean some of the ice will be working to chill the thermal mass of the mixing glass instead of the alcohol leading to an overly dilute or under chilled cocktail?”

Well, yes. But here’s the thing: It looks cool… and the effect is not that pronounced. I can’t really tell the difference anyway. 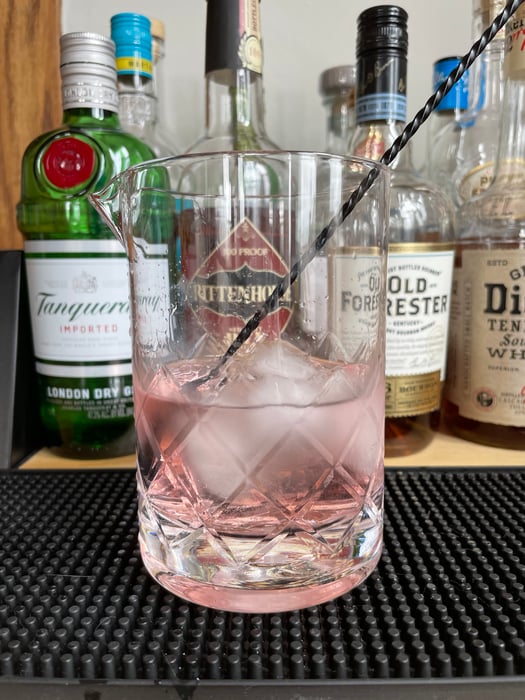 After you’ve finished stirring, strain into your chilled Nick and Nora glass. 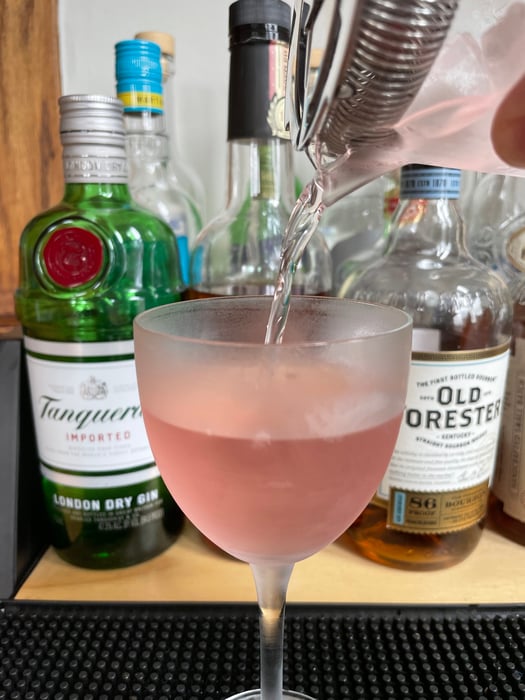 Finish with one Amarena cherry, and enjoy! 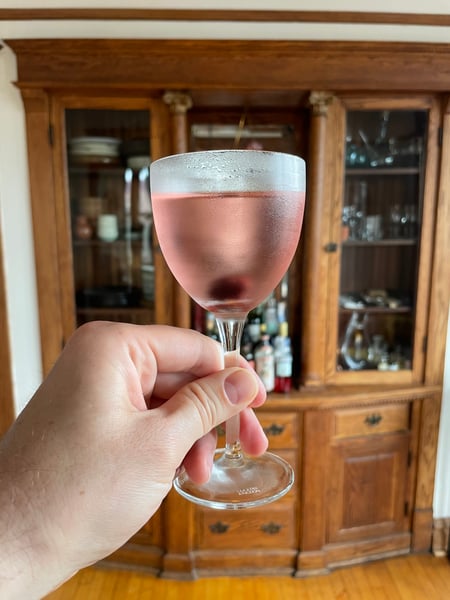 The first time I tasted this cocktail I was so pleased that it actually tasted good (I have tried making many of my own specs before this and… well, I’m not a bartender) that I decided to name it. Since it was based on a Rose I decided to keep with the floral theme, but I wanted to nod to both the cherry-forward profile, and the German origins of the Kirsch. Eventually I landed on the decidedly un-pretty Kirschblüte which means, you guessed it, Cherry Blossom.

If you enjoy learning about cocktails and how they’re built, or just want to learn some basics to impress your friends try checking out one of our upcoming virtual cocktail classes: