“You should only touch your steak three times; once to put it in the pan, once to flip it, and once to take it out of the pan.”

This oft repeated mantra is one of the most frequently peddled bits of advice for the novice steak (or burger) cook. The idea being that in order to develop a good crust—and for the steak (or burger) to cook properly—once you apply heat to your meat you should buzz off; leave it alone until it’s ready to flip thus giving it plenty of time to achieve proper browning and to ensure it cooks evenly from both sides. This makes a certain kind of sense, but there’s just one problem: none of it is true (cue podcast intro music).

I could bore you with theory right off the bat, but let’s just cut to the chase and get to the good stuff: the experiment. What’s that? Experiments are boring, and doing them in one’s free time would be embarrassing if it weren’t so sad? Well the joke’s on you, friend, because I play to my strengths, and being ‘sad’ and ‘embarrassing’ are two of my strongest attributes.

To set up my experiment I cut two 5 cm steaks from the same piece of tenderloin, then seasoned the filets mignon with just some salt, and tempered them on a wire rack for 40 minutes at 83 degrees (yeesh it was hot today). 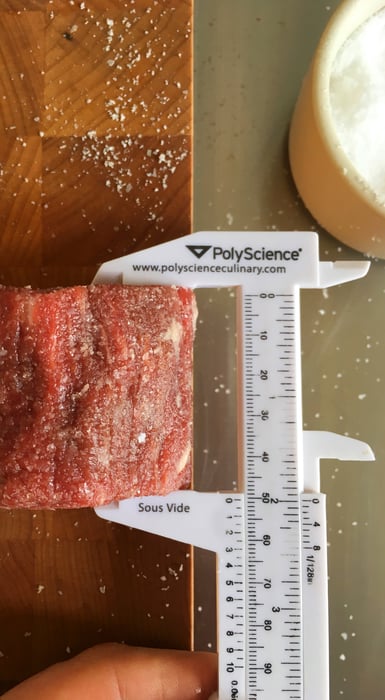 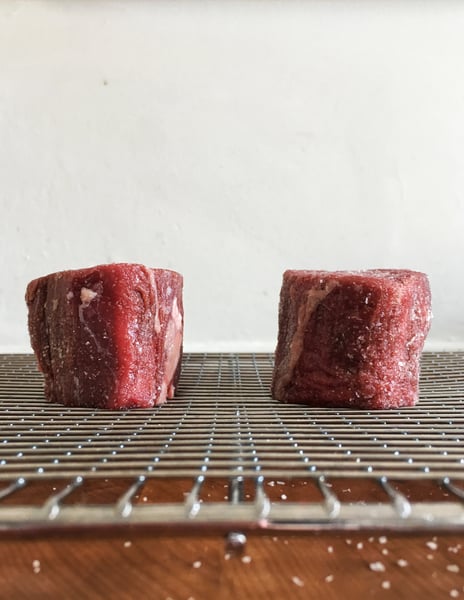 I cooked them in the same pan which I preheated centered over a high flame with a shallow layer of canola oil until the oil was just barely smoking, after which I added the steaks and turned the burner down to medium-high to prevent excess oil smoke. I cooked both steaks to an internal temperature of 125 (a cool medium-rare), and let them rest for 10 minutes before cutting them in half to check the cook. The only difference between the steaks was technique. For one steak I used the classic method of searing on one side, flipping once, and finishing the cook to my desired doneness, and for the other steak I flipped it every 30 seconds. I also had a stopwatch running to track total cooking time. 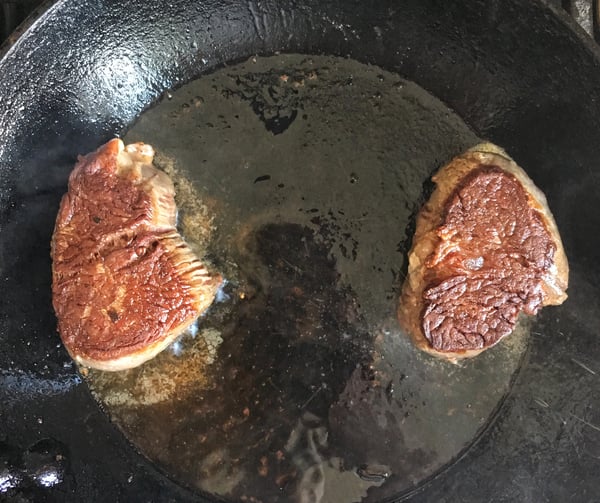 Once they were done cooking I could examine my first result: browning. Did one of these steaks achieve superior browning? I can feel your bated breath through this series of tubes, so lets go ahead and take a look: 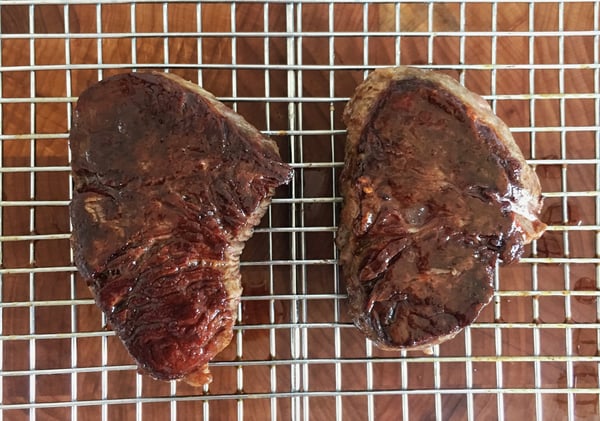 Can you tell which one is which? Well I won’t keep you waiting; the steak on the right is the one that was flipped every 30 seconds. Now before you go thinking “Ha! I knew it. I could tell exactly which steak was which.” I probably ought to tell you that the opening clause of this paragraph was a carefully constructed ruse. That’s right, a lie. You’ve been duped, for in reality it was the steak on the left that was flipped continuously. Why is it so difficult to tell them apart? Because the crusts developed on these two steaks are virtually identical. So much for the theory that a single flip results in a better sear.

But what about the cook itself? What can we learn from examining the internal doneness? Let’s take a look at that as well:

As you can see the steak on the left has a markedly wider band of ‘perfect’ medium rare meat whereas the steak on the right has a more pronounced section of gray over-cooked meat. So this means that constant flipping of the steak actually yielded a superior end result, huh. How ‘bout that?

So what reason do we then have to continue on with the single flip method? If the crust is identical, and the cook is actually better on the flipped steak, perhaps there’s a reason to be had in speed. Maybe the flip method comes with a time penalty due to the constant removal from the heat caused by the flipping. It’s true that there was in fact a significant cook time discrepancy between the two methods. The single flip steak took 7 minutes to finish cooking, while the multi-flip steak clocked in at 5 minutes 30 seconds. That's right, the multi-flip method is also about 20-25% faster than the single flip method. Surely now we can resign the single-flip steak cooking method to the compost pile of culinary history, no matter how boisterously classically trained cooks, or backyard weekend grill warriors might issue their imperious protests.

If you, like we at The Chopping Block, love to cook steaks, and are ready to take your skills to the next level, be sure to check out one of our many steak-centered classes coming up in September: