Happy New Year of the Pig

My husband & I lived in Beijing, China for three years in the late 1990s. We frequently talk about how, for us, it was the perfect time to be there as an expat. A lot of the old, traditional ways of life still existed in the city, and we most definitely knew we were not living in a western country, so there was still a sort of mystique and sense of adventure that went along with making our way there. On the other hand, there were enough modern conveniences to make day-to-day living not as hard as it might have been even only five years earlier. We met some wonderful people along the way, both Chinese and other expats from many countries. One Chinese family in particular sort of adopted us to guide us through the assorted Chinese holidays and customs. They really brought us into their family and in spite of the language gaps (everyone had a dictionary by their side!) we learned so much and always had a wonderful time.

In China, no holiday is celebrated more than the Lunar New Year – usually referred to here as Chinese New Year.It is the kick-off to the week-long Spring Festival and traditionally everyone was given the entire week off work (sometimes two weeks!) following Chinese New Year to allow families to gather from far and wide. We loved being in the city at that time – the streets were empty, and it was so calm! In more recent years, the amount of time off has decreased a bit, but it exists nonetheless. It’s time to be with family.

This was one holiday that we fully embraced and took back with us after we repatriated back to the US in 2000. After a few years practicing the boiled dumplings that I learned to make while living in Beijing, we usually had a friend or two over for dinner. Then, somewhere along the way, our annual Chinese New Year party became a real tradition and expanded to 10-12 people in our little apartment in Chicago! We love sharing the traditions that we learned so much about, and I love being able to cook my heart out, bringing in the aromas and tastes I loved so much. I’ve talked about “taste memories” before, and they just take me back! I think the warmest my heart felt was when a young Chinese student-friend who joined us a few years ago closed his eyes at one point during the meal and said, “I feel like I’m home”. I felt like we gave each other a gift that night!

So our big, loud celebration has gone steadily on for at least ten years. But now bring on 2019 and we’re moving on March 1st. With the New Year of the Pig having arrived earlier this month on February 5, we had already been living among stacked boxes for a few weeks. There was no way we had room or time for our annual celebration. My head understood, but my heart so missed doing it! As a way to soothe my soul, I started looking through photos from Chinese New Year dinners past and thought I would share a few photos and memories with you.

It’s always such a mixed bag of friends who come, depending on who’s available. Neighbors, old friends, new friends, ages have ranged from 22 to 85 all around the same table – and the talking never stops! Some people remember one another from prior Chinese New Year parties, but there have been times when no one really knew anyone else there except us and the person they came with (if they came with someone). So we always like to kick things off with little snacks to start.

I should mention here that food items that are either round or long in shape are significant: round foods are said to be similar to round coins, which inspire prosperity and abundance; long foods signify good health and long life. So last year we had preserved plums, candied ginger (round-ish!), seaweed sticks, and anise boiled peanuts. Oh and in the center are wrapped pieces of “lucky candy”, a strawberry-milky candy; all I can figure is that strawberry season is right around the corner since Chinese New Year is also a harbinger of Spring. The only thing I actually made here were the star anise-five spice boiled peanuts – not crunchy, but not mushy - just right and with a hint of anise. I always make way too many, and we have them to snack on for at least a week. And since most meals in China – even in restaurants – are served family style, Lazy Susans never went out of fashion over there. It brings me a strange sort of happiness that they are making a comeback here these days!

My husband’s all-time favorite soup is hot and sour soup – or “suan la tang”. Whenever I make it for Chinese New Year, I always wonder why I don’t make it at other times during our long, cold Chicago Winters!

We like ours with bits of shredded, tender chicken along with dried black and wood ear mushrooms, shredded tiger lily stems, and tofu all in a rich chicken stock flavored with ginger, garlic and Sichuan peppercorns. We part with tradition a bit here. Often in China, the soup is served last, but we like to kick things off by serving it at the beginning of the meal – it’s usually a cold night and a small bowl warms everyone right up!

While we’re eating the soup, we usually pass around a bowl of tea eggs – a treat, often found as street food, that I always enjoyed any time of year when we lived in Beijing. 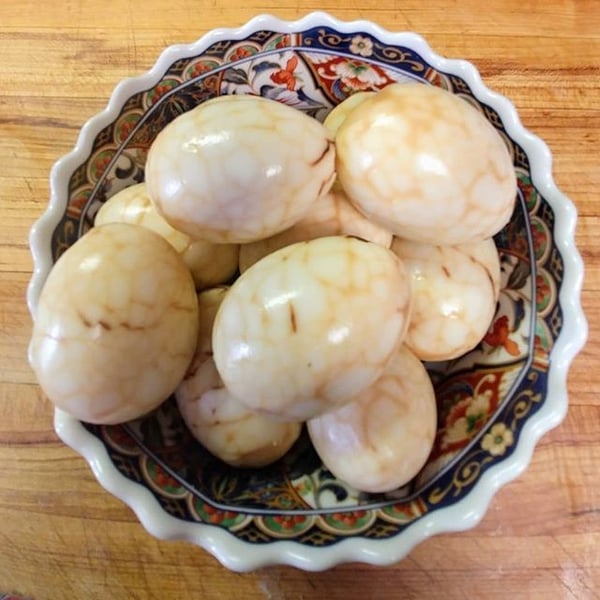 Once the eggs are hard boiled, I tap the shells with the back of a spoon to crack them all over – but don’t peel them! Instead, I make a strong tea – I like a combination of jasmine (for sweetness) and lapsang souchong (for smokiness) teas, flavored with a bit of star anise. Then I set the cracked shell eggs in the tea and just let them soak overnight. When I remove the shells, they are left with a light scent and beautifully marbled mosaic-like patterns across the white. I think they are just gorgeous!

Then we move on to our whole, steamed fish. It is such a simple preparation and while some may prefer not to see the head on their fish, you’d be amazed how quickly people adapt once they taste it! Plus, never forget that there’s significance to nearly everything and in this case it’s abundance and plenty, along with good luck for the year from start to finish (head to tail)! 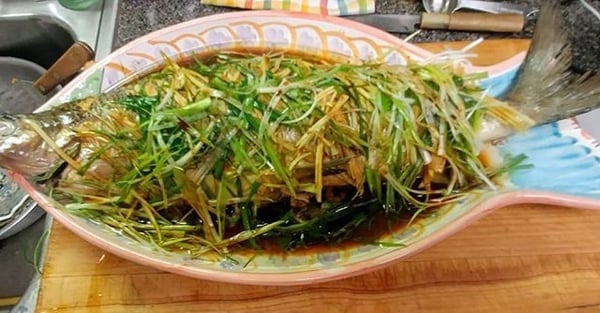 Steamed and sprinkled with julienned strips (“silken threads”) of scallions, ginger and a bit of sugar and salt, it is then drizzled with piping hot peanut oil and splashed with soy sauce. I love doing this at the table – the aromas are incredible!

I usually serve some rice alongside the fish, along with a vegetable or two. I love making green beans with minced pork – or “gan bian si ji dou”. They’re traditionally from Sichuan Province, so they have a bit of heat to them. 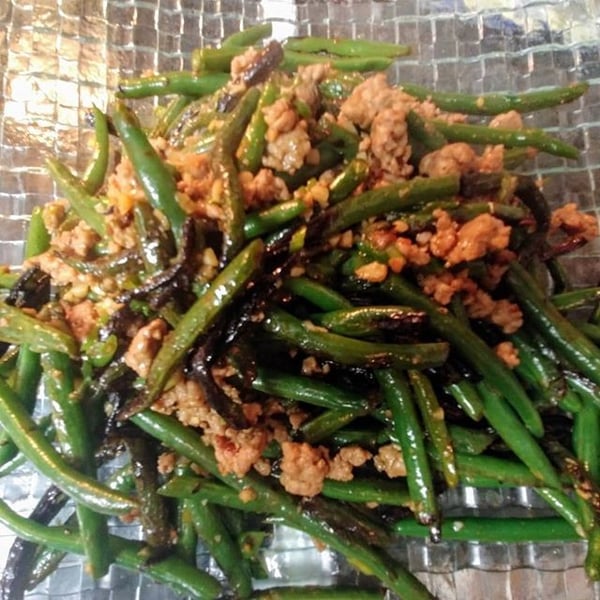 The beans are stir-fried to the point of getting a little wrinkly and a bit scorched. There have been times when we needed to open a window while these are cooking – they can generate more than a little smoke!

Last year I also roasted up some baby bok choy. This was the first time and it was such a hit, that I think it may become part of the regular menu. 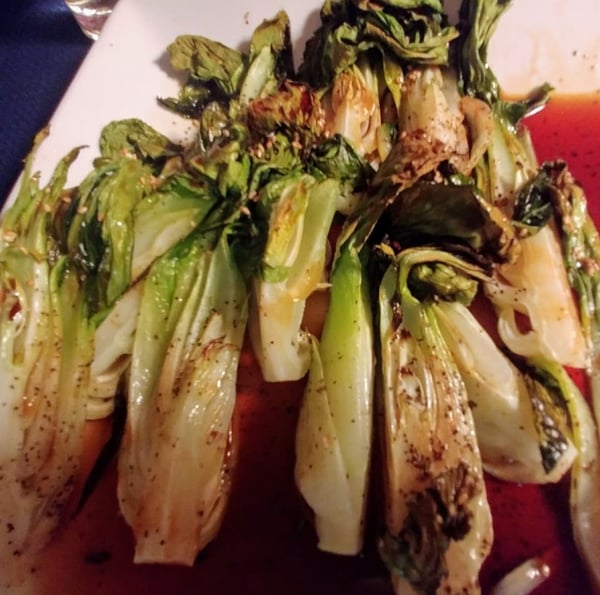 Both of these vegetable “sides” are long and slender, representing – you got it – long life!

Then comes my absolute favorite part of the meal – the dumplings. It’s interesting. With Beijing being in the northern part of China where the temperatures are still cool at Chinese New Year, boiled dumplings (“jiaozi”) are a big part of the celebration. In other parts of the country, celebrations include many other things, including “long life noodles”  or “longevity noodles”: they’re extra long for all the right reasons.

But with Beijing being the only place we every celebrated Chinese New Year, boiled dumplings are kind of our thing. The family that guided us through the holidays was very patient in their teaching – we had a lot of laughs over the “almost correct” dumplings that my husband and I made! When we returned to the US, they gave us one of the small rolling pins they use to roll the dumpling wrappers – it had been his grandfather’s. It’s worn and has burn marks on it. And I treasure it. Here is a little video clip of me making the making dumplings:

Dumpling madness! I make 100, as tradition dictates, stuffed with a pork-scallion-ginger-garlic mixture. I’ve also been told it’s important to line them up in rows (long lines… long life) as you make them, as opposed to setting them in a circle, or you’ll spend your year running in circles! 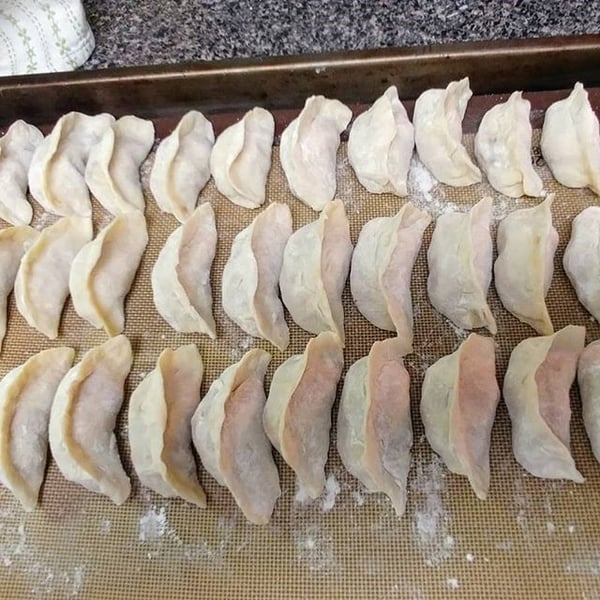 I like to make them a day or two ahead of time so that I’m not rushed the day of the party. I freeze them on the tray; once they’re frozen solid, I just put them in big plastic bags. When I’m ready to cook them, I just pop them into the boiling water right from the freezer. 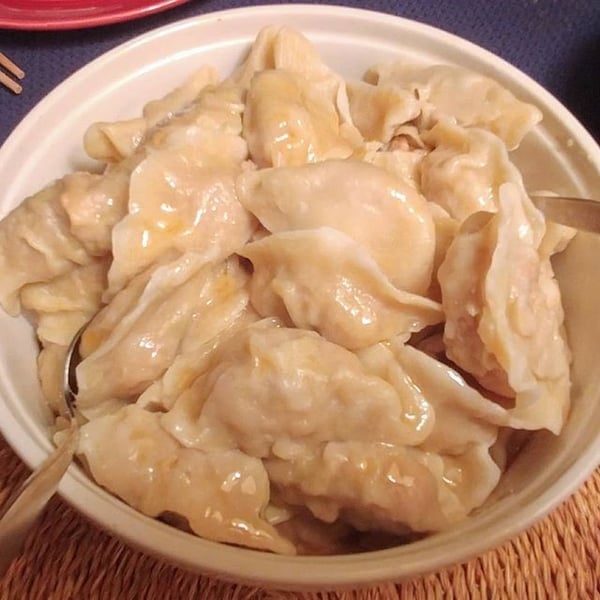 I serve them with a black vinegar mixture and generally there aren’t too many left of the 100 that make it to the table. I have to say that I love when there are a few left over because they make for a great little lunch the next day, pan fried as potstickers. 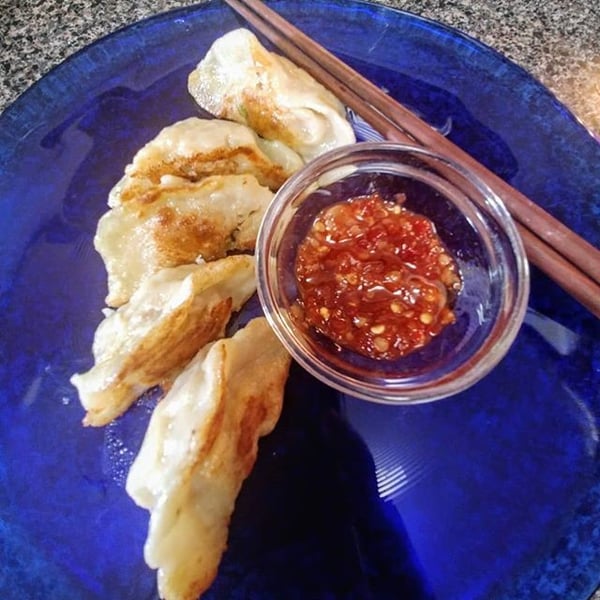 Along with the dumplings I also like to serve another protein. A favorite always seems to be braised pork belly (“hong shao rou”). Being pork belly, it’s super rich – and then this has the slightest bit of sweetness to it. 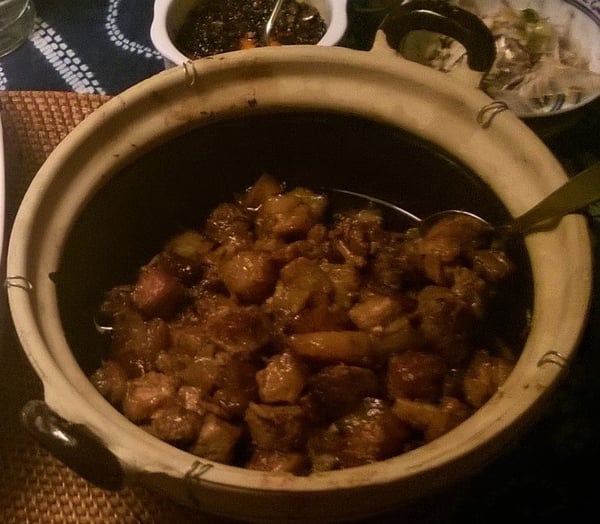 It braises ever-so-slowly for hours and comes to the table piping hot. It complements the dumplings so well!

Finally, there is dessert, for those who still have room! Desserts are not a big thing in China, generally speaking. However, one that I always loved was Stuffed Lotus Root, where you stuff the holes of the lotus root with sticky rice, boil it in sweetened water, and serve it with a brown sugar-honey mixture. While it does take a bit of time, it’s fun and the results always get a “how did you do that?” It’s also very light and a great finish to a big meal. 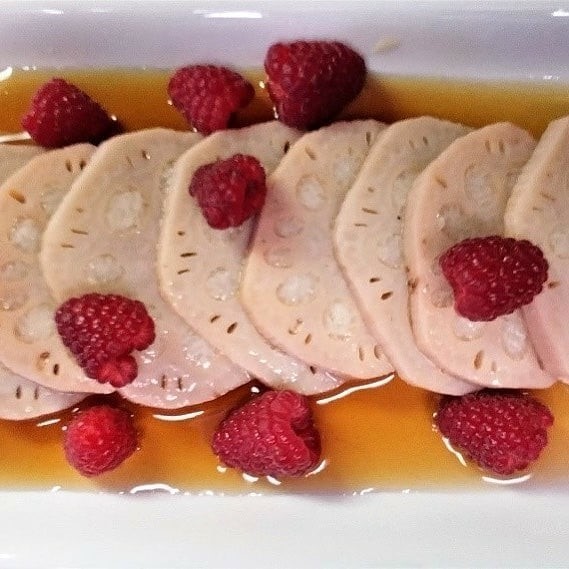 Thanks for taking this walk down Chinese New Year memory lane with me. While it wasn’t quite the same as preparing the meal, I loved remembering all the traditions we have come to love – and I hope you’ve found some inspiration to try something new. Happy New Year of the Pig!

In every culture, food brings people together. Exploring other cultures through their food is an incredible journey! The Chopping Block offers all kinds of classes that celebrate the cuisines of other cultures. In March, take a look at Ramen Workshop, Sushi Workshop, Culinary Adventure: A Trip to Jerusalem, Spring Break: A Trip to Mexico, Spanish Tapas, A Night in Spain, Dumplings Around the World, Midnight in Paris, Tuscan Villa, Old School Italian, Brazilian Carnival, Neapolitan Pizzeria, Know Your Gnocchi, Paczki Party, Taste of Thailand, and Pasta Workshop.