I’m sure by now the vast majority of people have at least heard of using the Ketogenic diet, or Keto for short, as a means to lose weight. I have had several clients tell me that they have friends or colleagues currently trying it and were curious for more info, so I figured they probably aren’t alone in that regard.

Our bodies use two macronutrients for energy - carbohydrates in the form of glucose and fats. Glucose is mainly used for anaerobic metabolism and fat is used for aerobic metabolism. Glucose is sort of our bodies preferred, but not absolutely necessary, fuel source for many different organs, including our brain, liver and muscles. Glucose is totally essential to central nervous system and red blood cell function. Luckily we only need about 100 grams of it a day, and our body can create more than that per day on its own via gluconeogensis - in simple terms, using amino acids from protein or breaking down triglycerides from fat and using them to create glucose.

If we deprive our body of any carbs for roughly 18-24 hours, we will then begin to create what are called ketones, or ketone bodies. These ketones can be used as the fuel source for the organs previously mentioned, however, again, they are not the preferred fuel source. Pretty much everyone has some ketones floating around in their system - the goal of the ketogenic diet is to be in a sustained ketogenic state where we have essentially stopped using carbohydrates from our diet and have shifted all metabolic functions to using ketones for energy, aside from the central nervous system and red blood cells as mentioned earlier.

2. Why is this such a popular diet for losing weight, and does it work?

Before I continue, I’ll repeat something that I say in at least half my blog posts: as long as you are in a calorie deficit, any diet you follow will cause you to lose fat. This is just simply the first law of thermodynamics that states energy cannot be created nor destroyed. Proponents of the keto diet state that since you are in a ketogenic state, your body is burning more fat, therefore you’ll lose fat. This is definitely true, but only if you are still consuming less calories than you are expending, just like any other diet.

That being said, the keto diet can be a very useful way to limit the amount of calories you are consuming. A true keto diet will consist of 70+% calories from fat, 10-25% calories from protein, and less than 5% calories from carbs, and most of those carb calories will come in the form of fiber from nuts or leafy green vegetables so as to not pull you out of the ketogenic state.

Many people stick to a high protein, low carb diet and mistakingly think they are doing keto. If protein is too high, your body will turn those amino acids into glucose and you’ll still be using that as a main energy sub-state instead of ketones.

One of the biggest reasons that keto has gotten popular lately is that it is a pretty simple diet to follow. Eat a lot of fatty foods and entirely eliminate carbs (minus some leafy greens), and that's it. It is definitely possible to still overeat, but as someone who used this diet for my first bodybuilding show over 6 years ago, it's quite a bit harder to overeat on steak, eggs, ground beef, and plates of leafy greens than it is on most other things. My only slip ups came from eating too much peanut butter out of the jar. I did not know as much about nutrition then as I do now, and didn’t track a single meal and still got lean enough while maintaining most of my muscle mass to win my show. 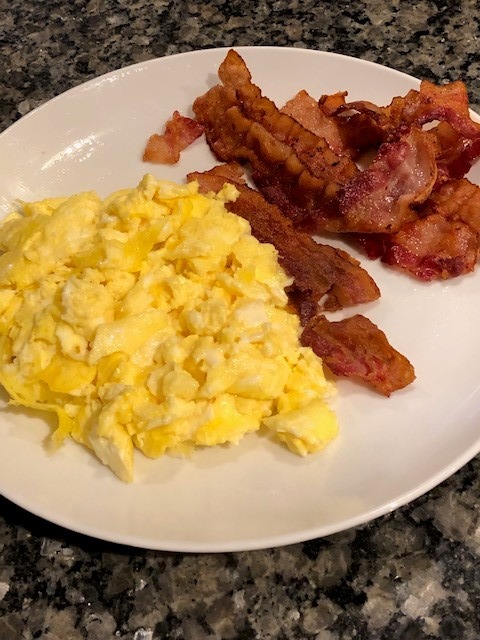 In addition to relative simplicity, any low carb diet will cause an immediate reduction in body weight within the first week of beginning it, due to less carbs in the muscle holding onto water. Beginning a new diet and seeing a quick 5 pound drop can be enough motivation to adhere to the diet, even if that weight drop is only water and not fat.

3. Is this style of eating healthy?

So long as you are using the ketogenic diet to lose or maintain weight, you can definitely make it be healthy with some big qualifications. Since you aren’t eating carbs, you are going to need to make sure you are getting adequate fiber each day. If you tire of eating a ton of leafy greens day in and day out, you’ll definitely need to take a fiber supplement. I would suggest anyone who plans to do this for the long term get their bloodwork done at the onset of it and get regular checks, as dietary saturated fat can cause your cholesterol to increase, so you’ll also want to make sure you have more dietary fat be unsaturated.

Last but not least, if your goal is to gain weight, you’ll need to be in a calorie surplus, and doing that with massive amounts of fat is a terrible idea. I would assume most people trying to gain weight want it to be muscle mass and not fat, and since the preferred fuel source of muscle tissue is carbohydrates, you will very likely not be as successful in your training as you would be on a diet with carbs.

4. What are the benefits and drawbacks of this diet versus a traditional balanced one with carbs?

Since your brain is operating on ketones instead of glucose, once you have entered sustained ketosis, many find that they operate in a clearer mental state. Part of this may also be due to the fact that blood sugar stays pretty constant on a keto diet, compared to having sugar rushes/crashes after a very high carb meal.

On the flip side, it can take anywhere from two to six weeks to become “keto-adapted”, and during that time you’ll likely be in somewhat of a low carb fog and feel like a zombie. This period of time often causes people to give up on becoming fully keto-adapted. Since you are using only one fuel source now, you may end up being more efficient at using fat for fuel, but currently there are no studies that show keto is more effective for weight loss when calories and protein are equated.

If you go back to incorporating carbs into your diet, you’ll want to do it slowly to essentially let your body re-adapt to metabolizing them. If you think of keto as a 12 week quick weight loss solution and immediately shift back to a high carb diet, you’ll likely gain a ton of weight back pretty quickly. The one advantage that a ketogenic diet has over traditional is that there is more and more research coming out that shows it can be beneficial in treating various neurological disorders such as epilepsy and Alzheimers, as well as reducing the size of cancer cells. Cancer cells need glucose and cannot run on ketones. Before even considering treating any illness or disease with diet, make sure to consult a physician or dietitian.

In conclusion, the ketogenic diet is essentially a unique way of managing your caloric intake by removing an entire macronutrient from your diet. It is not a magic weight loss solution, although it does offer some unique benefits from a traditional diet.

Like most “extreme” diets, these benefits also come with some drawbacks. My suggestion for anyone who thinks this “diet” is right for them would be to first consult a physician and get bloodwork done, and to also not think of keto as a diet, but rather a long term lifestyle change, as nearly all proponents of it live this way and do not simply use it for a weight loss phase and resume normal eating. Let me know if you have any further questions in the comments!

If you are interested in learning how to lose weight using a balanced diet, check out The Chopping Block's new Healthy Harvest class coming up on Saturday, October 19 at Lincoln Square. You'll learn how to make: