Sometimes I search for desserts that challenge me but that are still quite simple to make. Kladdkaka was that type of dessert for me. Plus for me, the name alone screamed, “bake me!”

I have to admit that I love desserts that contain butter. Let’s just face it, everything’s better with butter! I apologize to all those who disagree with that statement, but a dessert without butter just doesn’t seem like dessert to me. I also have to admit that I dislike making desserts where you have to cream butter and sugar together. I’m always terrified about either creaming the ingredients too much or too little.  Plus, it always seems like whenever I’m in the mood for making a dessert there’s always the issue of not having softened room temperature butter on hand. But I also have to admit that lately I’ve been experimenting with several chocolate cake recipes that contain oil. And those cakes have shown me that there are some things that aren’t “better with butter” one of those being olive oil cakes! 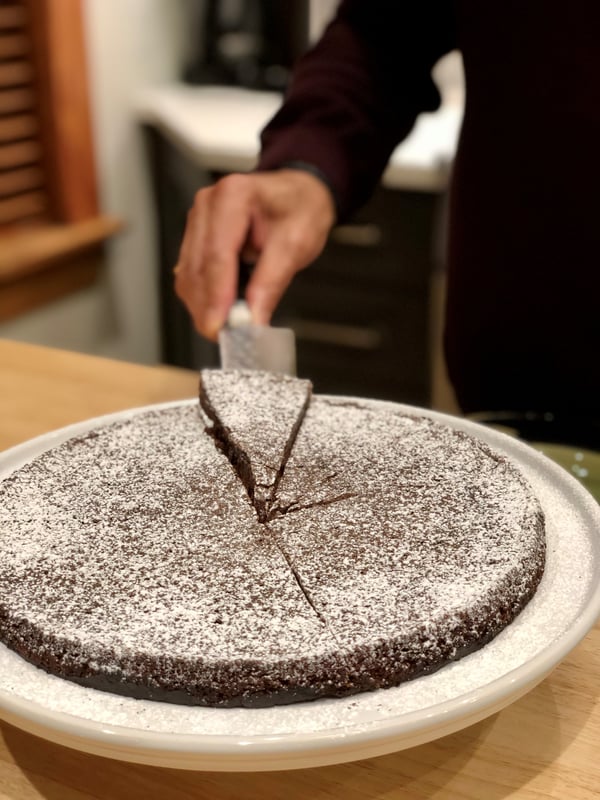 That is one of the reasons why I love Kladdkaka cake. It does contain a fair amount of melted butter, which is necessary in order to achieve the cake's richness.

Kladdkaka, literally translate to “sticky cake” in Swedish. Think of it as the Swedish version of the American brownie. It’s rich, chewy, chocolatey and kind of gooey. It has a texture somewhere between a gooey butter cake, a molten chocolate cake and of course, fudge. For me it’s the perfect dessert!

I’ve lately discovered several of my friends don’t really care very much for chocolate desserts. It practically broke my heart after hearing that from them. But who am I to complain? Everyone who knows me is well aware of my absolute total dislike for anything with coconut. The recipe comes together quickly, with most of the ingredients likely to be found already in your pantry.

Kladdkaka is a relatively recent addition to the Swedish cake culture. The origins are a bit unclear and some of the accounts as to where it came from are as colorful as they are conflicting. When I first discovered the dessert, for some reason I thought of it as this old Swedish dessert recipe passed down for generations, only to discover that the dessert originated in the mid-1970’s.

One of the things I love most about being a chef is the fact that some dishes are developed through an evolution process.  It might mean following a recipe and then forgetting an ingredient or adding an ingredient by mistake. Some of those mishaps have yielded some incredible desserts as well as savory dishes. And that seems to be the case with Kladdkaka.

The thinking is that someone had a recipe for a chocolate cake, perhaps a brownie type of cake, something central European style. That same person forgets to add baking powder only to realize their mistake halfway through the cooking process after noticing that the cake didn’t rise at all. They remove the undercooked cake from the oven and are delighted to find out that the cake is absolutely delicious. Hence the birth of Kladdkaka!  Who knows if its origins are true, but I’d like to think so.

Kladdkaka only exists in Sweden and during its brief existence it has gained a huge following. It’s even sold at all Ikea stores. It is the most common recipe search from Swedish websites. If you type it into your search engine, you’re likely to get well over 650,000 hits.

The ingredients for the cake are quite simple: eggs, cocoa powder, a small amount of flour, sugar, salt, vanilla extract and melted butter. And you only have to use one bowl and a stand mixer with the whisk attachment, or a hand-held electric mixer.

There are a few things that you need to be cautious of. The cake is quite thin and very delicate. So, be very careful when inverting it to a cake plate or cake stand. If it cracks a bit, don’t fret. Those cracks can easily be covered up with a generous dusting of powdered sugar. Make sure to sift your flour and cocoa powder. Do not bake the cake any longer than what the recipe calls for. If you do, you probably won’t achieve that gooey, fudgy chocolate texture that the cake is known for. The cake batter has a very thick consistency, it’s almost like chocolate frosting. Generously butter your springform pan, as well as the parchment paper that lines the pan.  (I’ll show my favorite way to line the bottom of a springform with parchment in the photos that I’m including).  I suggest sifting a tablespoon or so of cocoa powder on the bottom and sides of your springform pan as well.  It gives the cake an even more distinct chocolate flavor and adds another layer of texture. Lastly, make sure to run a knife around the edge of the cake pan before inverting.

My recipe calls for cake flour, but you can definitely use all-purpose flour. I made this cake at least three times.  And each time I tried adding an alcohol element to the batter. Once I used a tablespoon of Grand Marnier and the second time I used a tablespoon of Amaretto. Each one of those times, the cake didn’t bake off as perfectly as it did without the addition of the liqueurs.

I still wanted to add another element to blend in with the rich chocolate flavor. I discovered that using no more than a 1/4 of a teaspoon of almond extract achieved that. And the cake turned out perfectly with just a hint of almond. Of course, you can omit the almond extract if you’d prefer.

11 tablespoons of unsalted butter, 10 melted and 1 tablespoon for greasing the springform pan

1/4 cup plus 3 tablespoons of cocoa powder, 1 tablespoon put aside for coating the buttered springform pan

3/4 cup of cake or all-purpose flour 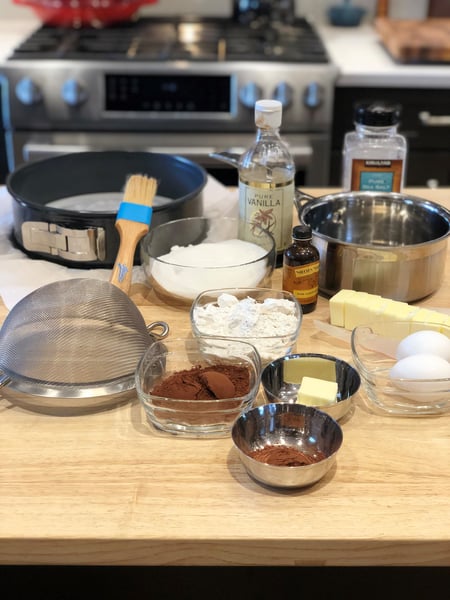 2. Line a springform pan with a circle of parchment paper; grease pan with the tablespoon of butter and sprinkle bottom and sides with 1 tablespoon of cocoa powder. (I found it easier to avoid cocoa powder clumps by sifting the cocoa). 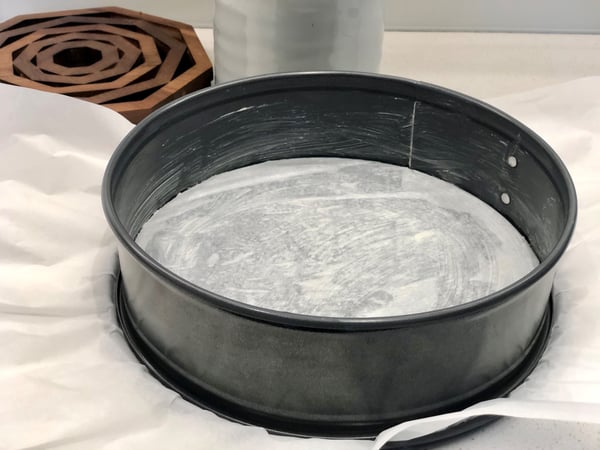 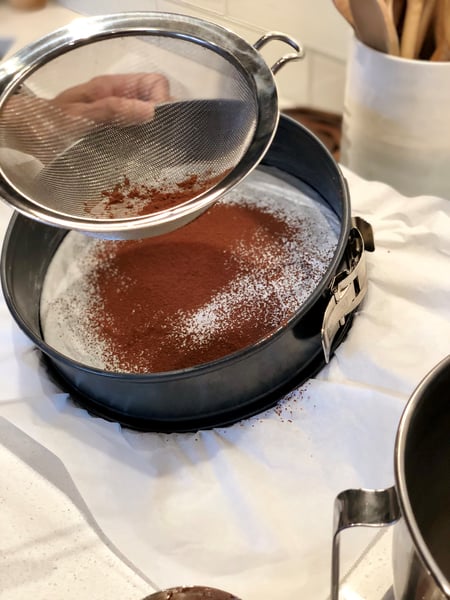 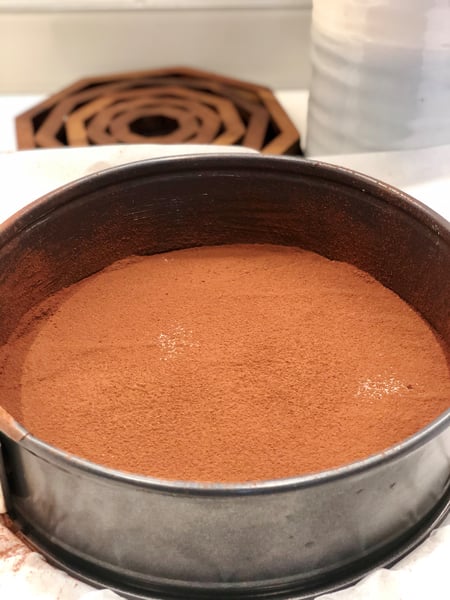 3. In the bowl of a stand mixer fitted with the whisk attachment, whisk together at medium high-speed sugar, salt and eggs until fluffy and pale yellow in color, about 1-2 minutes. 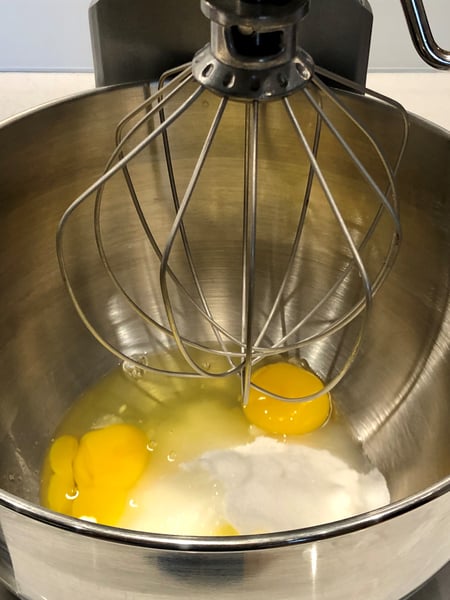 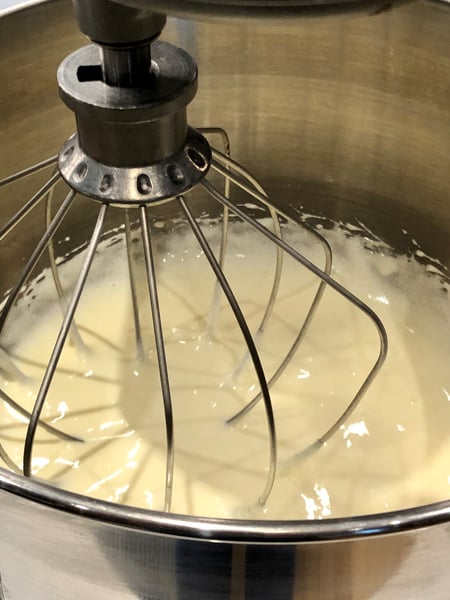 4. Sift cake flour or all-purpose flour, along with the cocoa powder into the egg mixture, whisking well to combine. Add melted butter, vanilla extract and almond extract if you wish, stirring with a wooden spoon until evenly incorporated. At this point the batter will be very thick, with the consistency of chocolate frosting. 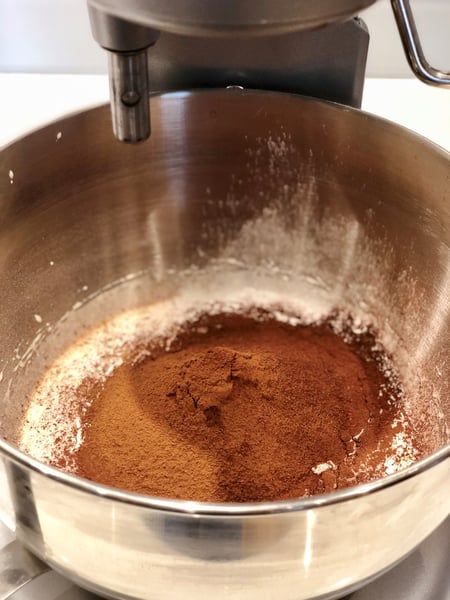 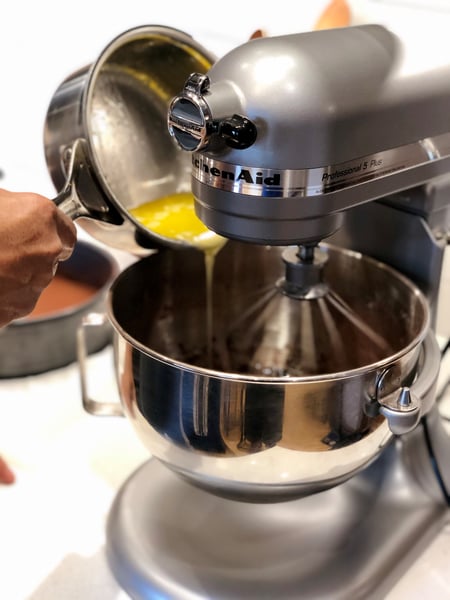 5. Using an offset spatula or a rubber spatula, spread batter evenly into your prepared cake pan. Place in the preheated oven on the middle rack of the oven. Bake for 20-25 minutes until the top of the cake is crispy and the center is jiggly, but not runny. Don’t overbake, or it won’t have the sticky, gooey center that is associated with Kladdkaka when cooled.

6. Let the cake cool in the pan for at least half an hour before releasing. Carefully run a paring knife around the edge of the pan and invert onto a plate. Flip the cake again on a cake stand or platter to serve crust-side up.  Dust cake with a generous helping of powdered sugar and serve.

Whichever way you choose to have it, I’m sure that it will become your new favorite dessert to make for friends or family. It’s a dessert that can be served for a fancy dinner party or just for a weeknight dinner, or, as I’ve heard from friends that I’ve given the dessert to, alongside with their morning coffee.