Move Over Fondue, Raclette is Where it's At

I love a good fondue party just as much as anyone. Dipping a multitude of food into melted cheese, hot oil or rich chocolate is a fun and interactive dinner with friends. But there's another cheesy dinner party that has my attention after a recent evening at my friends' house: raclette. 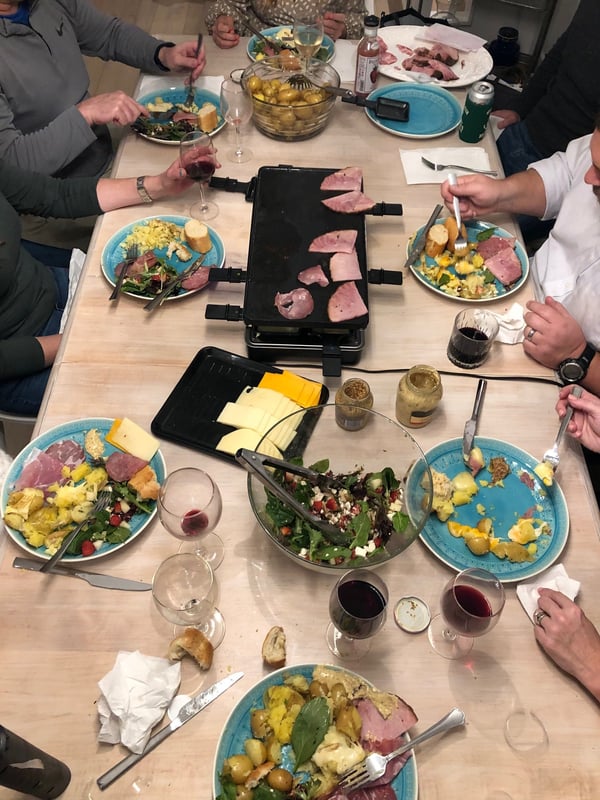 Like fondue, raclette is a typical après-ski meal invented in the Valais and Haute Savois regions of Switzerland and France. The French word itself means "to scrape," and raclette has been a tradition in Europe for hundreds of years. Raclette is both the name of a type of Swiss cheese and the name of the dish itself. But this meal is so much more than just melted cheese!

A true raclette cheese is protected by AOP (Appellation d'Origine Protégée), which translates as PDO - Protected Designation of Origin. This label guarantees that the entire production process takes place with the designated area, and that the ingredients are also produced within the specific geographical area to the highest quality standards. So, think of true raclette cheese like Champagne or Roquefort, which must be produced in certain regions to be called those names. An AOP raclette is made with the raw milk of cows that have grazed in the mountains of Switzerland.

However, cheese used for raclette is now made all over the world and from both cow and sheep's milk. You can also find it infused with a variety of flavors, from mustard seeds to wine to black pepper and even truffle.

The aromatic alpine cheese ranges in flavor from mild to piquant, depending on the wheel. It's a semi-hard cheese which is sliced and used for melting and grilling. Traditionally, the wheel of cheese would be held up to a fire to get it nice and melty. Today, we use fancy raclette grills positioned in the middle of a dinner table.

The beauty of this meal is that you don't even have to use raclette cheese at all. Similar semi-soft alpine cheeses like French Morbier or even Italian Fontina make a delicious substitute. And if you can’t find those, you can use another kind of Swiss cheese, like Emmental or Gruyere. Cheddar will even do in a pinch! 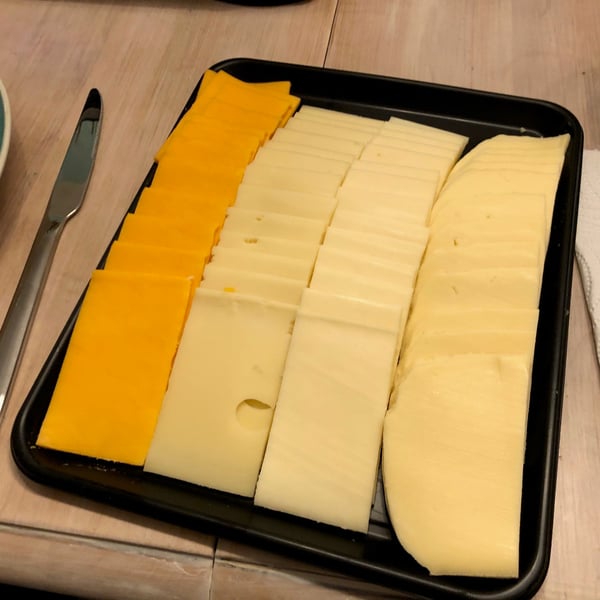 What to serve with your cheese is also flexible. A traditional meal would include boiled and seasoned potatoes, breads and cured meats. Vegetables such as tomatoes, mushrooms, broccoli, onions, bell peppers or zucchini all work nicely. Small cornichon pickles are a nice palate cleanser. You can also serve the raclette with a nice big salad like we did to keep things even simpler. 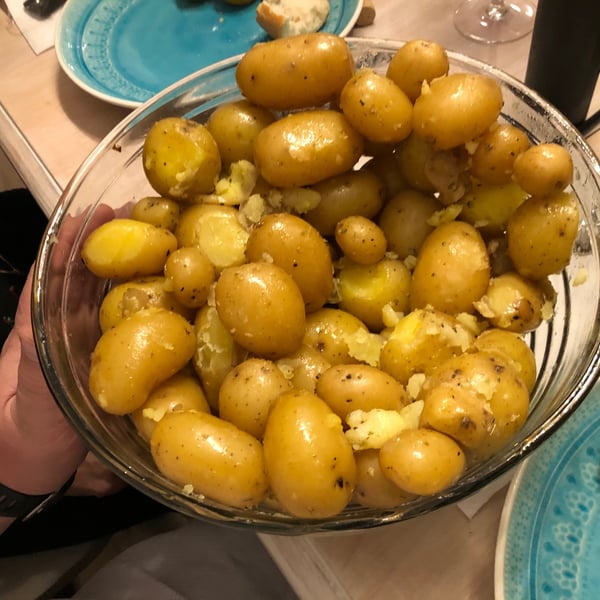 A raclette meal at home uses a table-top grill like this one. 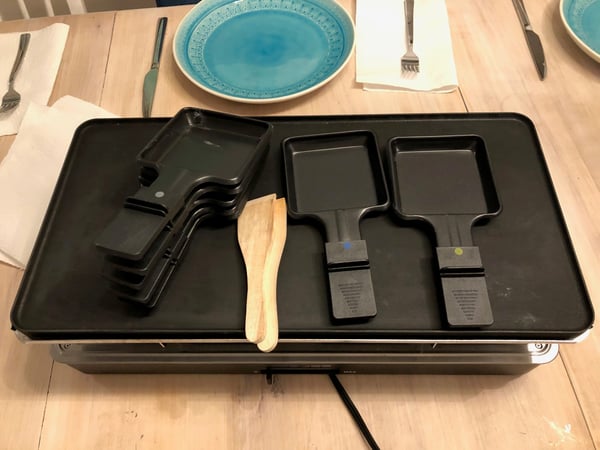 The cheese is melted in small pans called coupelles, which are placed on the grill to heat up the cheese. 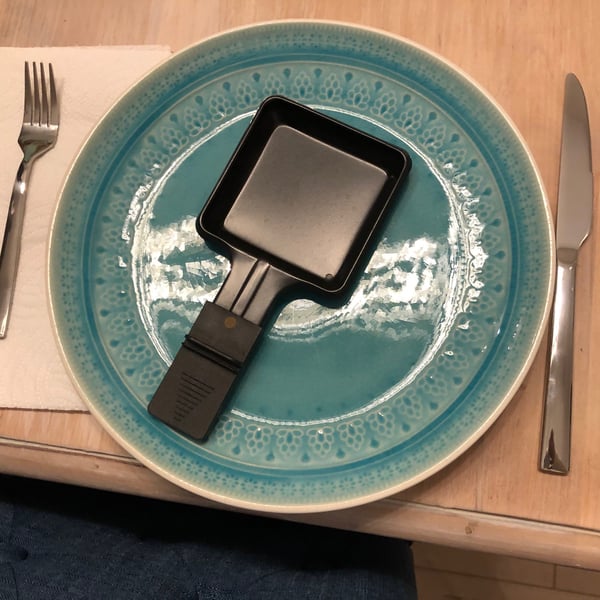 The grill can also be used to cook meat and vegetables. Since we used all cured meats like ham and salami, we placed them on the top of the grill for just a minute or so to get a little char on them. If you don't have a raclette grill and don't want to invest in one, you can also melt the cheese in a cast iron pan under your broiler. This works especially well if you are planning a raclette dinner for two. If you have a larger group, it might take a bit more time to serve everyone, but the results will be just as delicious.

A huge benefit of hosting a raclette party is the small amount of advance prep required. There is no cooking before your guests arrive, other than boiling some potatoes. Raclette is truly a stress-free dinner because all you have to do is prepare the potatoes, chop a few vegetables and plate up the cheese and meat.

Have some guests bring bread, assign a salad to others, ask all to bring wine, and then gather your guests around the table. 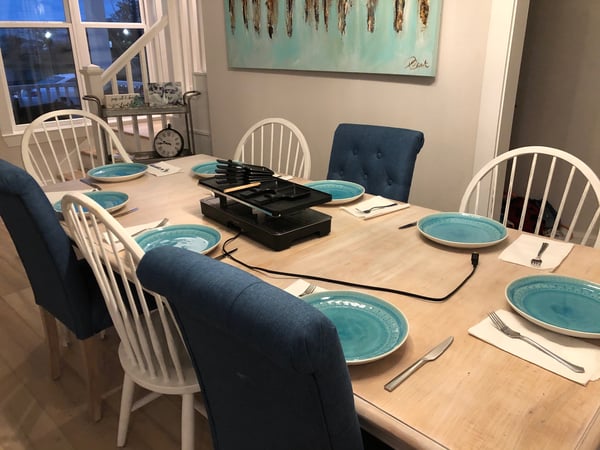 Platters of meat and cheese are passed around the table as guests cook a small amount of the cheese at at time and top their potatoes, vegetables and bread with the cheese.

You can customize the accompaniments however you like, which makes this meal very approachable for even inexperienced home cooks.

Another plus of doing raclette is that any leftover food (cooked or uncooked) can easily be repurposed for another meal. Got leftover potatoes? Make a hash for breakfast. Too much baguette? Make breadcrumbs or a bread pudding. Went overboard on purchasing cheese? There's no limit to the ways you can use up cheese and at the very least, you can make some amazing grilled cheese sandwiches.

At a raclette party, everyone is always well fed and has a good time. Put it on your must-do list once we are entertaining again, or go ahead and surprise the friends in your bubble with some remarkable raclette!

I mentioned earlier that you want lots of wine for this style of dinner because it's one that can last a while. Everyone tends to linger around the table and enjoy each other's company so it's important to have enough wine (always). We all know that the marriage of wine and cheese is one of our most exciting taste sensations, so join The Chopping Block for a virtual Wine and Cheese Tasting on Saturday, February 13 at 5:30pm CST. You'll learn the secrets of successful wine and cheese pairing in this tasting of three prominent cheese styles mixed-&-matched with three wines. It could be the perfect appetizer for a romantic raclette for two for Valentine's Day weekend!