One Pan to Rule them All: The Wok

I’ve been cooking for a while now. Long enough to have developed some fairly thorough opinions on things like cookware. Usually when I’m asked to pick a favorite of something I find it very difficult. Favorite dish to cook? Favorite restaurant? Favorite color? How is one supposed to choose between so many amazing options? But when it comes to favorite pots and pans, I definitely have an easy favorite, and that’s the wok. 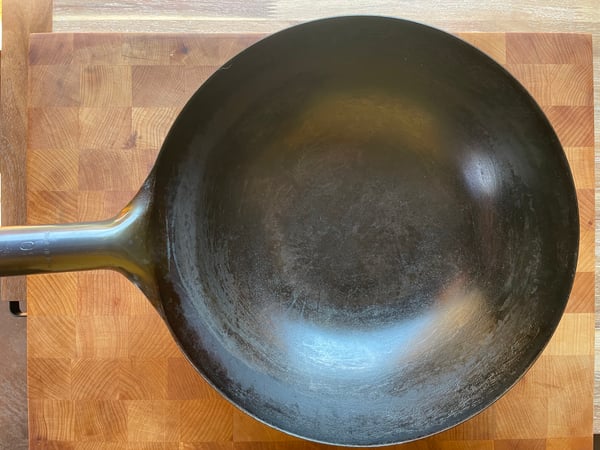 The wok is my favorite pan because of how versatile it is. There are so many cooking techniques at which the wok excels. It’s the pan of choice for stir frying of course (among the most versatile cooking techniques on planet Earth), but it is also my go-to choice for deep frying, it can sauté, braise, stew; it's even a great choice for delicate and precise European style sauce making. Pretty much the only things it isn’t good at are techniques that require a flat bottom pan like searing a big steak or cooking Paella.

It is, in large part, a wok’s bowl-like shape that makes it so great for all these different techniques, something you don’t find on any Western style pots or pans except a saucier, and—to some extent—a frying pan. The nice thing about a good wok though is that it costs about ten times less than even an inexpensive saucier pan. While we’re on the subject of shape, you can get woks that have a flat bottom section that work much better on most home ranges, and these are great for a great majority of home wok cooking. However, I prefer the fully rounded bottom style because the majority of the cooking I’m doing in my wok is stir frying, or other Chinese techniques, and the rounded shape is a bit better for these applications. 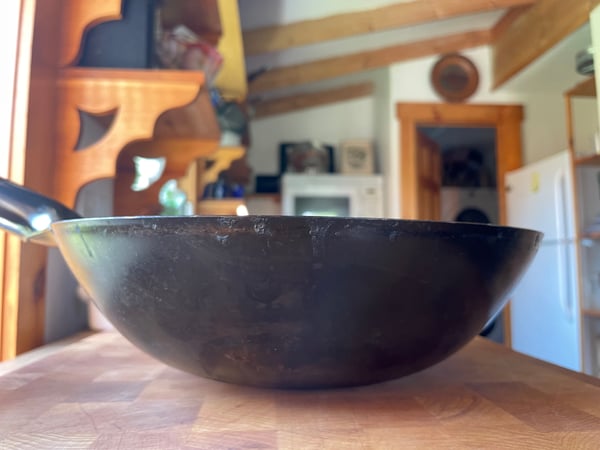 My wok with fully rounded bottom

You can also get a wok in a number of different materials. You’ll find woks in stainless steel, aluminum, anodized aluminum, but my personal favorite material is carbon steel. Carbon steel woks are typically made of thin gauge steel, and are seasoned like a cast iron or black steel pan. This, combined with their smooth surface, allows them to develop a pretty powerfully nonstick cooking surface, which only adds to their versatility. I like carbon steel woks the most because they have the best balance of heat retention, responsiveness to changes in heat, and most of all, price.

If you’re already a bit familiar with wok cooking, you may also know about the fabled wok hei. Wok hei translates to “the breath of the wok” and is that slightly smoky, grilled flavor you find in the best restaurant-style stir fries. Most people who are already familiar with wok hei have also been told that it's very difficult to achieve at home. This is because wok hei is typically produced when stir frying on tremendously powerful gas wok burners, burners that are likely an order of magnitude more powerful than the most powerful burner on your home range, assuming you have a gas range. For those with electric or induction stovetops, the problem is even worse. However even if you do have a gas range, power isn’t your only problem. First, there’s stability. A wok like mine with a rounded bottom doesn’t sit in a very confidence-inspiring way on most burner grates.

There’s a solution for this particular problem called a wok ring, which is basically a small metal ring that you put on top of your burner that allows it to stay stable while you cook. 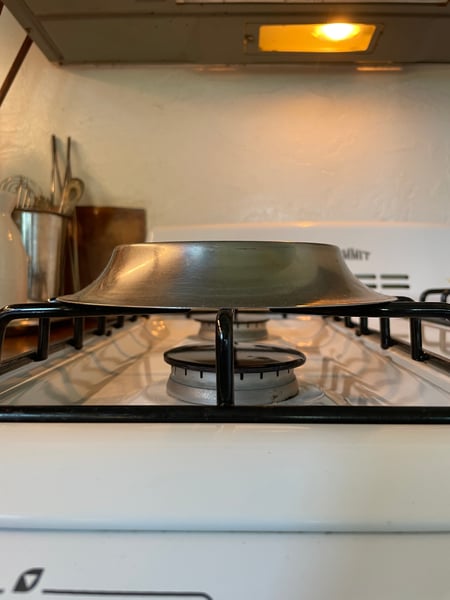 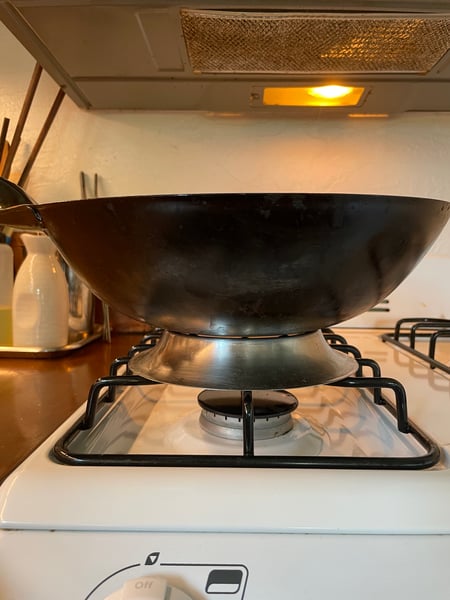 This isn’t an actual wok ring, but this is the idea

But even once you’ve stabilized your wok, a typical gas burner puts out heat in a ring around the bottom of the pan to spread heat out.

This is great for Western-style pans that typically are designed for even heating, but woks aren’t meant to work that way. They want a big concentration of heat right in the center, which then tapers off on the sides as they slop away from the flame. This allows woks to have multiple temperature zones for different cooking processes all taking place at once. There’s a way to get around this problem on gas ranges too, but it's a little… unorthodox. If you remove the cover of the burner manifold, the gas no longer spreads out to each of the small side holes. Instead all the gas ignites and shoots up through the main center hole. 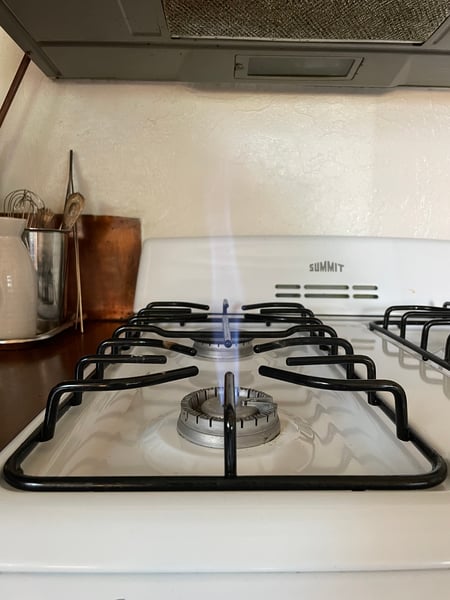 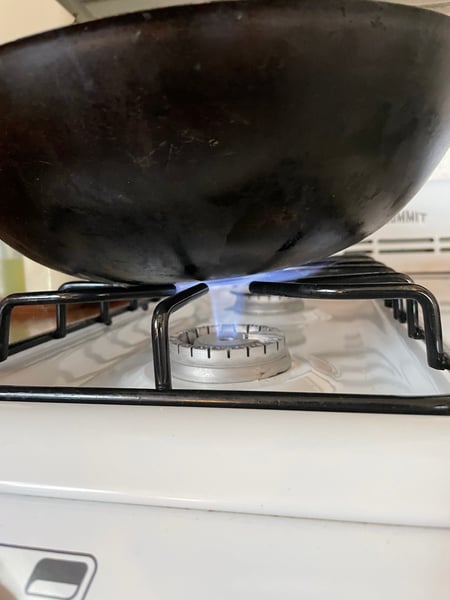 It's important to note that you have to light the burner first, then remove the manifold cover (which means you have to use tongs to do it). This actually solves the problem of heat distribution very well even if it is a bit sketchy. The problem with this method, however, is that the burner flame will blow out very easily when its like this, and since wok hei is generated by tossing your stir fry contents through flames licking up over the sides of the wok, this can result in having to stop cooking multiple times mid stir fry to re-light your burner. Not ideal.

Not to mention that even like this your home burner isn’t powerful enough to produce wok hei. As an aside, this seems like a good time to mention that you can get decent wok hei on a home gas burner or even an electric resistance coil or induction burner by:

Of course, you can also solve these many problems by doing all your stir frying outside on a dedicated, propane fired wok burner, but that can be a bit of an investment, and many of them are currently out of stock. Not to mention I don’t have a propane grill, so I’d also need to invest in the tank just for my intermittent stir frying. Luckily many years ago I found a way to do my outdoor stir frying without a propane burner, while still getting enough firepower for wok hei. There is a small, portable charcoal fired wok burner called the tao which is made in Thailand. The one I have is out of stock but there’s an even less expensive one that can be had right now (though I can’t personally vouch for this specific one). 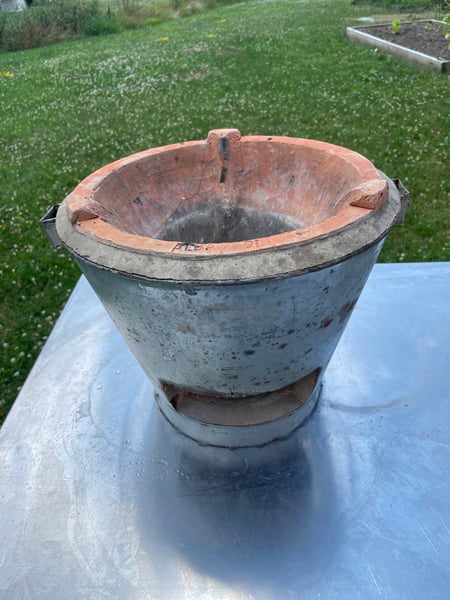 You just light your charcoal using your preferred method (I favor a chimney starter), dump the hot charcoal in, and let it burn down in the burner for a few minutes until it's so hot that you can’t hold your hand six inches above the charcoal for more than a fraction of a second. From there, you just sit your wok on top, and stir fry away. 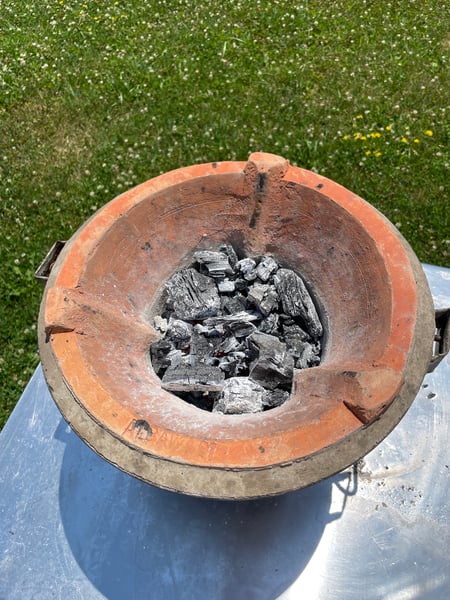 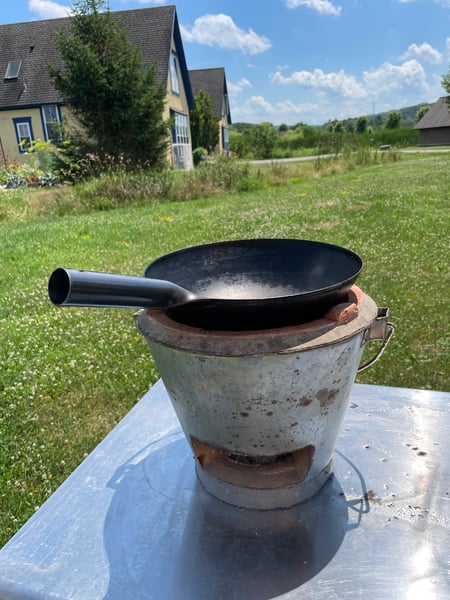 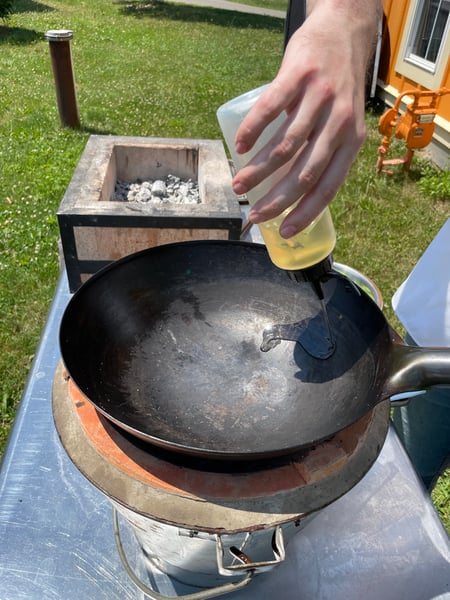 For more inspiration in the realm of outdoor cooking, check out our upcoming Grilling Boot Camp on Saturday, August 13 all day outdoors at Lincoln Square.  Happy stir frying!