As I look out my window, it is hard to believe that spring is around the corner. There is about two feet of snow in my yard, and snow shoes are the ideal footwear for the trek from my home to office these days. While drinking my coffee this morning, my view was obstructed by the stalactite-size icicles hanging from the roof. But through that frosty view, I saw one of the first signs of spring: bluebirds. There were bluebirds eating at my bird feeders and flitting around their houses, scoping out the digs and confirming if this was a safe place to make their nests. 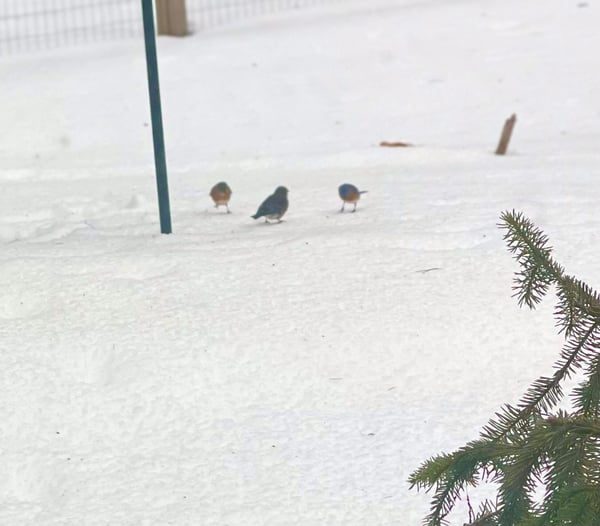 Not two hours later, a flock of rose-breasted grosbeaks came rolling through our yard. I don’t know if I trust the groundhog to tell me we are going to have an early spring, but the birds are a sure sign that spring is just around the corner. When I think spring, I think about one of my favorite dates, April 3rd. If you didn’t know, April 3 is a big day; it is National Chocolate Mousse Day! I can’t think of anything better to celebrate the start of spring than to make some chocolate mousse. I can’t actually think of anything better than chocolate mousse anytime of the year.

Chocolate mousse has a reputation of being extremely difficult to make. It seems recipes that have a perception of being hard to make are often perceived as fancy. Maybe these recipes seem fancy because we tend to save making them for special occasions? It is true that chocolate mousse has several delicate steps involved and that can add to the degree of difficulty. However, all of those steps are elemental cooking techniques. Consider that if simply eating chocolate mousse isn't incentive enough for you to make it!

These elemental techniques are worth mastering on their own: whipping cream, whipping egg whites, melting chocolate and folding. If you already know how to do any of those techniques, you should know you are really close to knowing how to make chocolate mousse! The approach I am going to take in teaching you how to make chocolate mousse is to teach you how to whip cream, egg whites, melt chocolate and to fold. As always, I like to simplify the steps as much as possible. 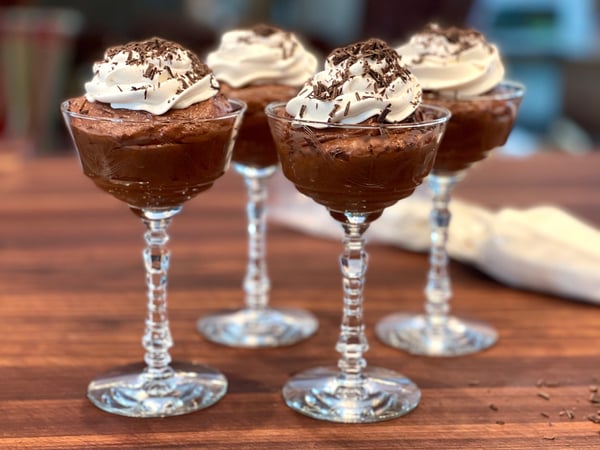 Place a heatproof, round bottomed bowl on top of a sauce pan filled with approximately 2 to 3 inches of water, this is referred to as a water bath or bain Marie. 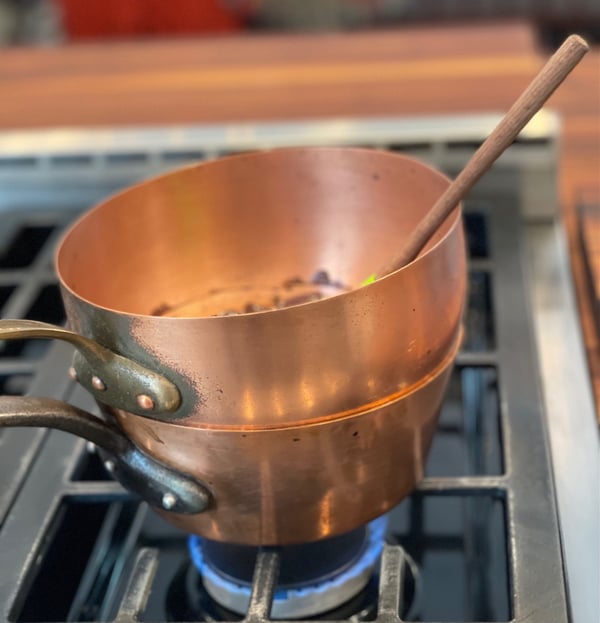 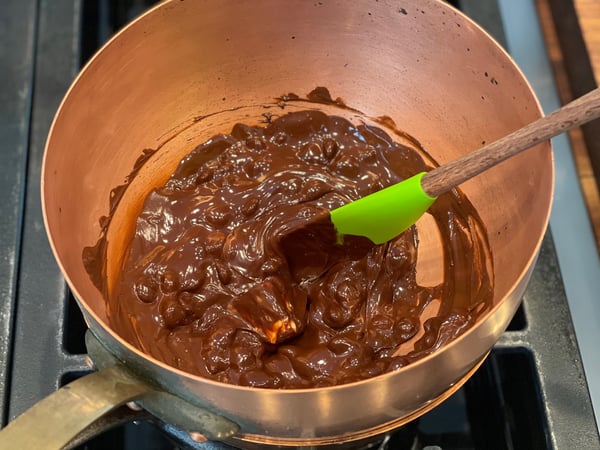 You need very little heat to melt chocolate. Think about it this way: when you eat a piece of chocolate it can melt right in your hand! When chocolate is overheated or if the chocolate is exposed to a drastic change in temperature, it can take your chocolate out of temper. When chocolate is made it is tempered, which is what gives it its smooth and creamy texture. Chocolate in temper is smooth and creamy, but when out of temper it becomes grainy and or bloomed (meaning white in color). When your chocolate turns white or becomes grainy, that is what has happened. Follow the instructions above and you should have no problem. 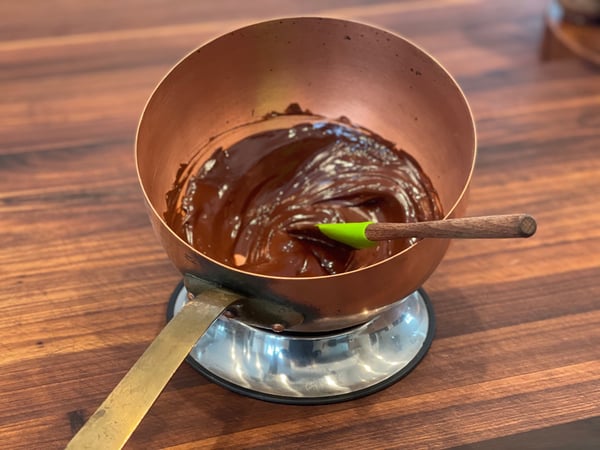 Separate the whites from the yolks. Make sure to use room temperature eggs for your mousse. The egg whites will whip much more easily, and the egg yolks won’t seize your chocolate when you add them to the chocolate if they are room temperature. 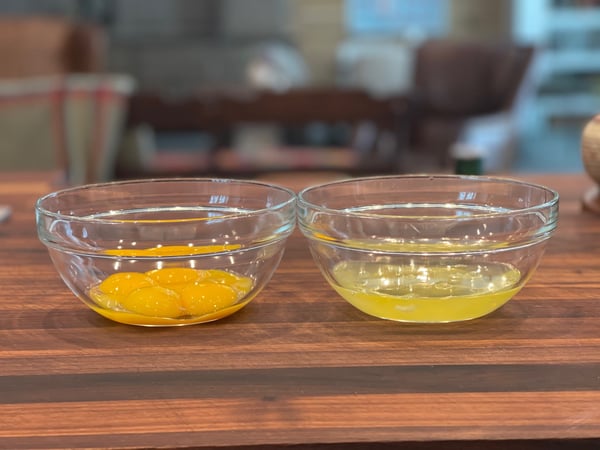 Add the five egg yolks one at a time to the melted chocolate. Mix until just combined, there's no need to mix too much. 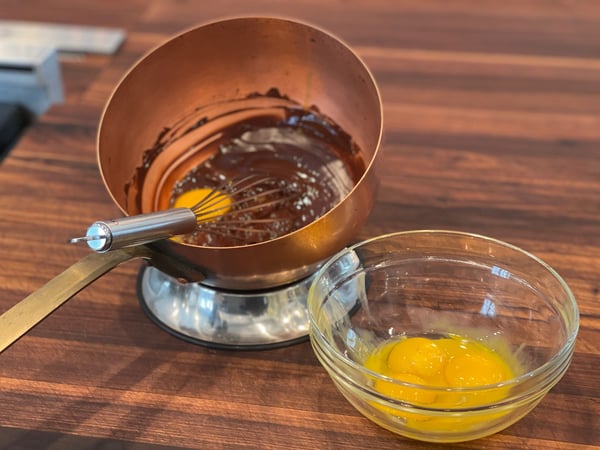 When I am whipping egg whites or heavy cream, I like to use a very large bowl. The bigger the bowl, the quicker they will whip. The larger bowl allows more air into the whipping process, and it also reduces the mess!

This step isn’t as fragile as you might expect, but you do want to exercise some restraint in combining the chocolate, whipped egg whites and whipped cream. We combine 1/3 of the whipped cream and egg whites into the chocolate mixture at a time. You do not need to thoroughly mix after each addition, 70% combined is good enough. Save the thorough mixing for the last addition.

We use a technique called folding when we combine ingredients that are fragile. Whipped egg whites and cream are fragile and can easily deflate. The idea of folding is that we are trying to preserve the volume in the cream and egg whites by folding rather than stirring. Folding is the process of skimming the surface of the inside of the mixing bowl with a rubber spatula and lifting some of the contents up and over. It can be hard to explain, so check out the video. 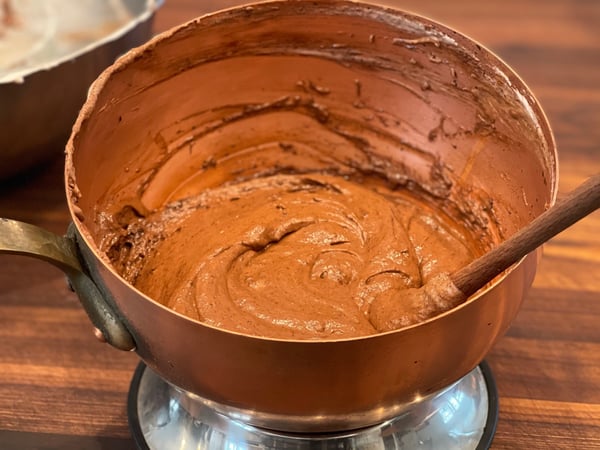 After your mousse is made, it needs to be chilled for a couple of hours. Before we chill it, I like to put it into its serving dish. Most people put the mousse into a wine glass, which is pretty but it can be hard to get it into the glass without getting the mousse all over the sides of the glass. I like to use a coupe or martini glass for serving; its wide mouth make filling them easy. Garnish with a little whipped cream and a shave of chocolate, if you like. 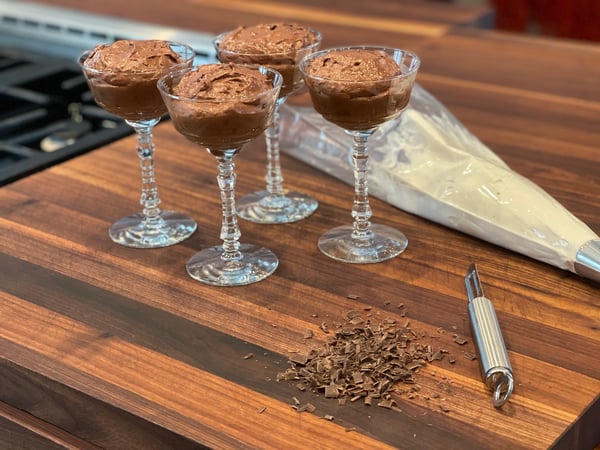 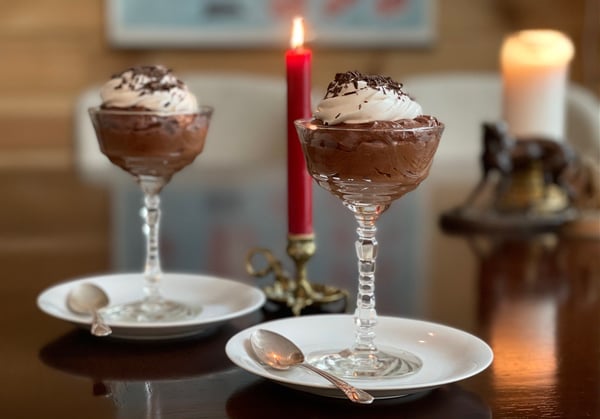 If you are looking to build more foundational cooking techniques, we have plenty of classes to chose from our virtual Building Blocks series to our in-person Culinary Boot Camps at Lincoln Square.

If you want to enjoy this dessert prepared for you by one of our professional chefs, join us for a Surf and Turf demonstration at Lincoln Square on Saturday, March 27 at 6:30pm. This menu is mouthwatering and it's full of cooking techniques: 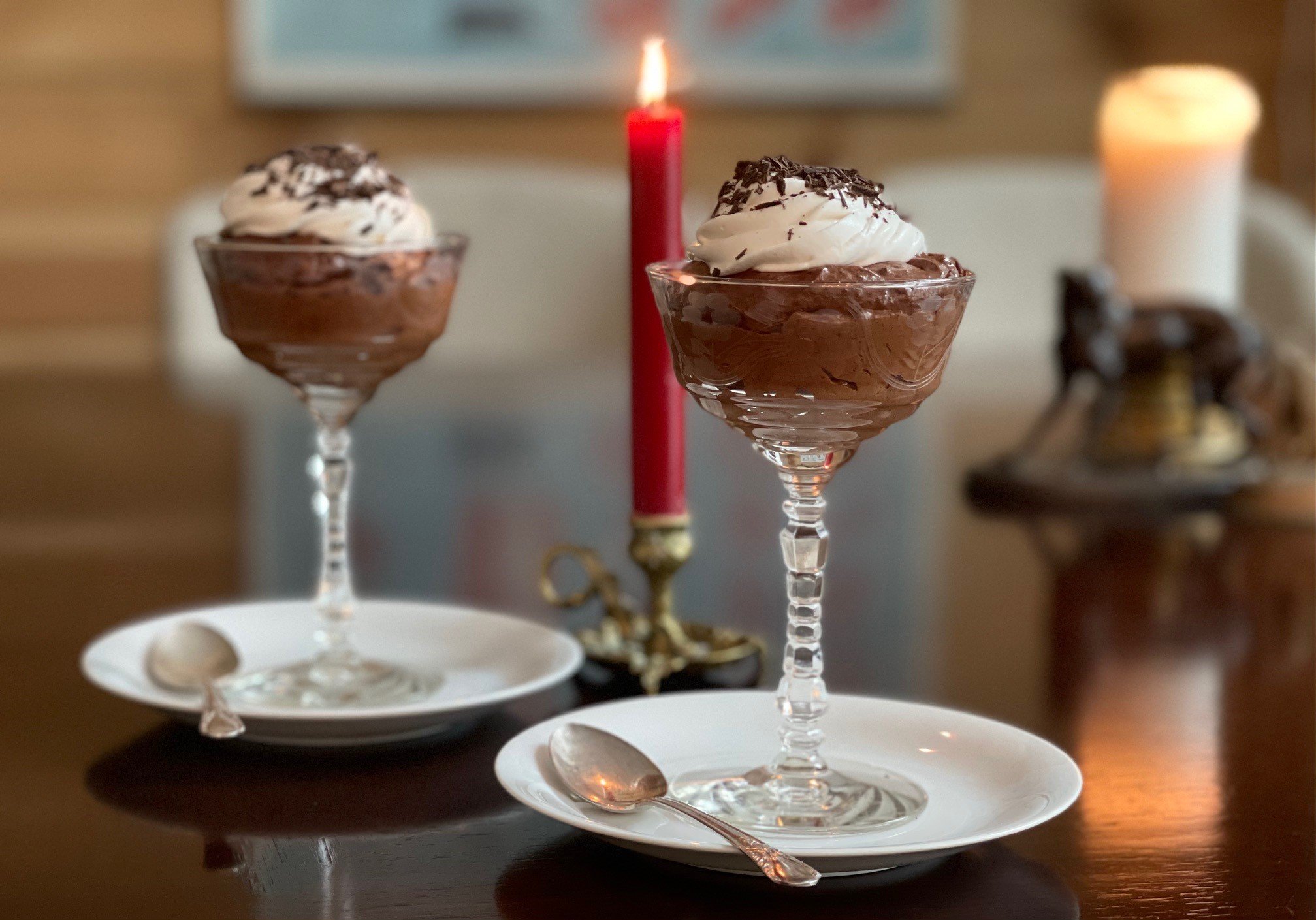