The Comeback of The Old Fashioned Cocktail 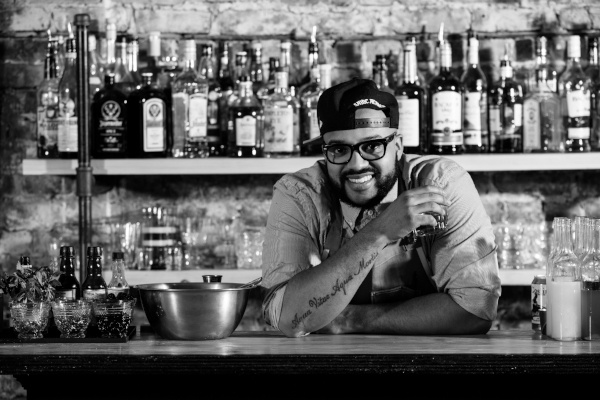 Ten years ago when I started bartending, Old Fashioneds weren’t a “thing”… at least not one that you wanted to drink. This was a time when bitters were scarce, misused and misunderstood, bar spoons were for just about everything but stirring cocktails, and sugar packets from the kitchen were as close to simple syrup as you’d get. Not to mention in 2006, the better part of the bartending and drinking majority was still suffering from bright-red, maraschino cherry-induced Stockholm Syndrome, and was convinced that day-old orange slices and Sprite were integral ingredients in an Old Fashioned cocktail. 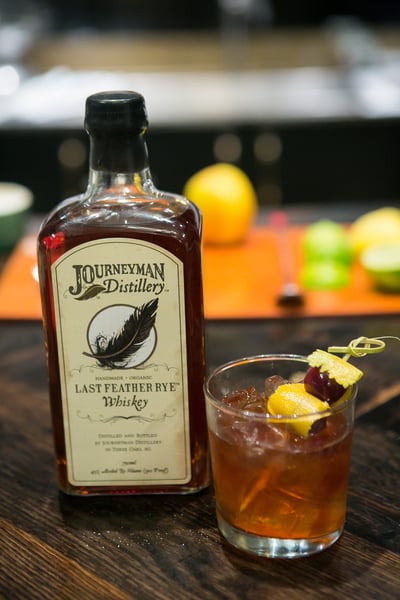 Thankfully, as we’ve charged through this decade-long “cocktail thing” (as Jeffrey Morgenthaler calls it), the Old Fashioned has been “rediscovered,” properly defined and is now enjoying its well-deserved time in the spotlight. Plainly and historically speaking, an “Old Fashioned” is the original cocktail, composed of spirit, sugar, water and bitters. As there is no citrus in the recipe, the mixture is stirred, not shaken, and is then strained over good sturdy ice and garnished with an expressed orange peel and a bourbon or brandy soaked cherry. Sounds good right? Well to be safe, and so that you can show off to the know-it-all at the office, let’s take a slightly more in depth look at this cocktail. 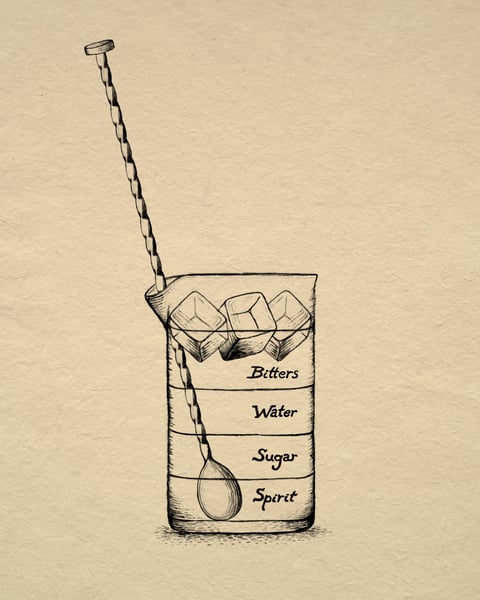 The Anatomy of an Old Fashioned

First and foremost, you want something strong and that you enjoy the flavor of. Old Fashioneds are spirit forward cocktails without lemon or lime juice, or any modifiers to deaden the swift kick that 2 ounces of 100-proof spirit can provide. That being said, your spirit DOESN’T HAVE TO BE WHISKEY - any aged spirit that you enjoy can be the star of your Old Fashioned.

To be fair, this element should probably just be called “simple syrup”: avoid sugar cubes or any kind of granulated sugar for cocktails. It’s almost impossible to fully dissolve the sugar, which means that your drink will be lacking the sweetness necessary to be balanced. Lastly, for a stirred cocktail you want to control the water content as much as we can so we’re going to be using a 2:1 simple syrup (2 parts sugar to 1 one part water).

As we’ve already established, an Old Fashioned only has 4 ingredients, each with a very specific role. The role of the bitters here is two-fold and neither aspect can be understated. First: The bitters will balance the sweetness of the rich simple syrup and keep the drink from being cloyingly sweet. Second: the bitters are the punch of flavor to keep this drink from being nothing more than a glass of high proof spirit. Once you’re comfortable with the cocktail as it is outlined below, you can change it up and really personalize it by exploring different flavors of bitters.

Again, another slight misnomer. “Water” in an Old Fashioned comes by way of dilution, which comes by way of stirring. After the above ingredients are combined over ice, you want to stir this cocktail until it becomes slight cloudy and chilled. Stirring provides a gentler way of diluting a cocktail without adding ice chips or thinning out the body of the drink too much. Stirring allows you to maintain a silky texture while still lowering the temperature and pleasantly bringing the ingredients together to create a uniform, smooth cocktail.

If you are interested in learning more about this classic cocktail, join me in one week for The Perfect Old Fashioned at the Merchandise Mart. This hands-on cocktail class will delve into how to tailor the drink's equation to your personal preference and why this drink is considered by many as "THE" bar standard.