What is Kugel and Why is it so Good? 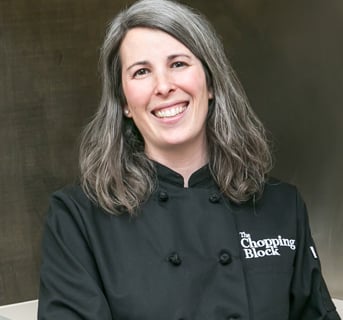 Kugel. Never heard of it? You’re not alone. Most of the time, when I say kugel, people either look at me with a strange expression, or they say, “Bless you”.

The important holiday of Passover is coming up, and it’s a nostalgic time for me. Growing up in a Jewish household, my mom would spend hours upon hours preparing for the Seder. The Seder is a ceremonial dinner that takes place during the holiday.

While busily polishing the silver, turning our cloth napkins into pretty fans, preparing the matzo ball soup, slow cooking the brisket in my grandmother’s ancient slow cooker, and getting all the fixings ready for my great uncle Robert’s gefilte fish, the house would fill with amazing smells, and end up looking beautiful.

One staple that was always on the table was a baking dish filled with kugel. This was the most anticipated dish of the year for me. 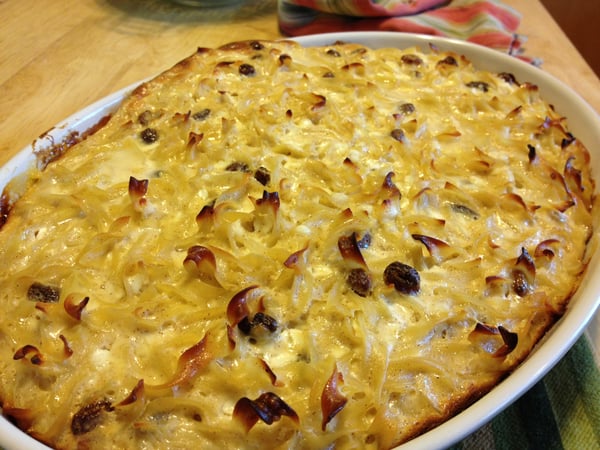 So, let’s get down to the details. Kugel is a sweet, egg noodle casserole. The noodles are boiled and then baked with some sugar, eggs, sour cream and cottage cheese. It’s our family tradition to also add raisins.

Be advised that egg noodles are not kosher for Passover, but Manischewitz does make a gluten-free variety that are ok to serve during the holiday.

There are so many different variations of this recipe, and I’m sure each and every one of them is delicious in it’s own right, but my mom’s is really the best. So, I called her up to get the recipe, thinking she would have to recover it from the depths of our great ancestors artifacts. But that wasn’t the case. She said “It’s Shelley Long’s recipe!” You know, the actress from Cheers? Ha! Go figure. 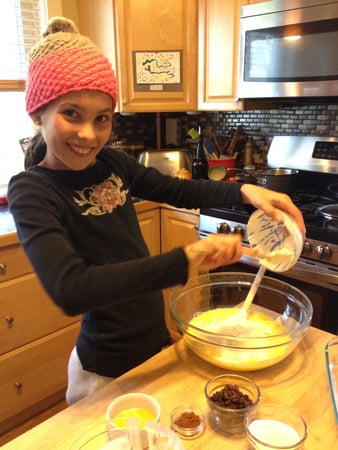 Are you longing to learn how to make other Jewish delicacies? Attend our Jewish Deli cooking class at the Merchandise Mart location this month where we will teach you how to make matzo ball soup, pastrami-filled knishes, kugel, and potato pancakes. Yum!

The Chopping Block's May class calendar is now available. See what we have in store for you this spring!