I recently made dinner for my best friends, and told them I would make anything they wanted. They weren’t craving anything in particular, so I headed to the grocery store to see what produce stood out to me.

I knew I wanted to make the Potato Rosemary Focaccia from The Chopping Block's How to Bake Bread class. That gave me a starting point for my flavor, texture, color and balance of the meal. I found lacinato kale (a.k.a. dinosaur kale), rainbow carrots, and cippolini onions to use as my vegetable side dishes, knowing the colorful carrots would pop against the dark green of the kale. I decided to grab purple fingerling potatoes to use for the focaccia instead of Idaho or red potatoes, simply for the purpose of color. Fresh thyme, rosemary and garlic would help me tie everything together with pork tenderloin as my protein. 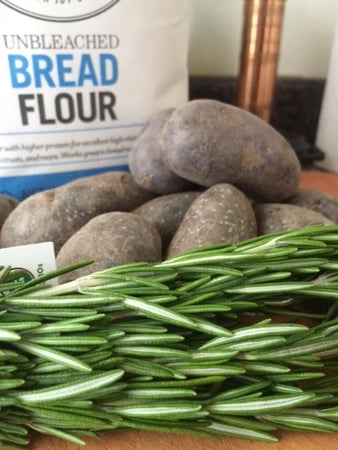 Now it’s time to prep! I started by making the focaccia first because it takes about two hours from start to finish. I decided to thinly slice the fingerlings using the mandolin instead of cutting them into small dice, so I could just shingle them on top of the focaccia and skip the par cooking process. 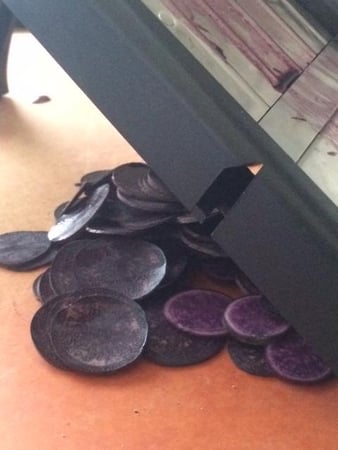 Also, I left the pancetta off of the focaccia because I wanted to use it with the kale. Here is the recipe for the focaccia:

Yield: Enough dough for one half sheet tray of focaccia

1. Sprinkle the yeast on top of water in the bowl of a stand mixer and stir gently until dissolved.

2. Allow to proof until slightly foamy and aromatic to ensure the yeast is alive, about 5 minutes.

3. Add oil, half of each flour and salt.

4. Mix on medium-low speed with a dough hook until incorporated, scraping down the sides as necessary. 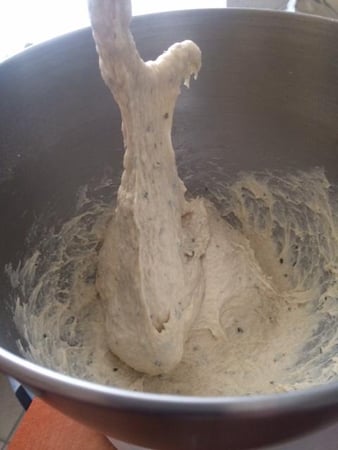 5. Add most of the remaining flour and the rosemary, and knead on low speed until the dough is smooth and elastic, 5 to 6 minutes. If the dough is too wet, sprinkle in flour as needed. It’s better to have a dough that’s a bit too wet than dry.

6. Turn the dough out onto a floured surface, knead a few turns by hand, and then shape into a ball.

7. Place the dough in an oiled bowl and cover with plastic wrap on top of the bowl, not directly touching the dough.

8. Let the dough rise at room temperature until doubled, 60 to 75 minutes, or in the refrigerator overnight. 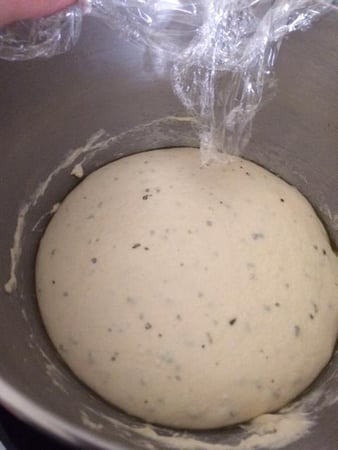 9. Preheat the oven to 400°. 10. Rub the bottom and sides of a sheet tray generously with some of the olive oil. Punch dough down gently to deflate. Shape onto the sheet tray using fingertips until dough is about 1/4- thick.

12. Allow to rise, covered with plastic wrap, 20 to 30 minutes at room temperature. 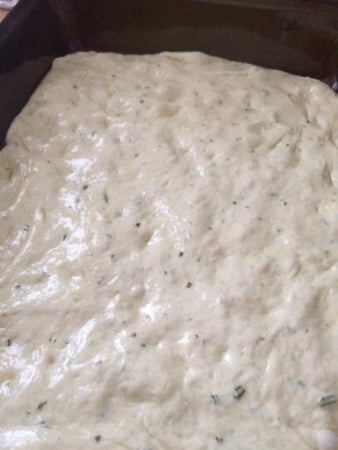 13. While the dough is proofing, prepare the topping. Place the diced potatoes in a saucepan and cover with water. Bring to a boil, reduce the heat to a simmer and cook until the potatoes are tender, 8 to 10 minutes.

14. Heat a sauté pan over medium-low heat and add the olive oil. Add the pancetta and cook, stirring occasionally, until just crisp. Drain the potatoes well and toss them in the pan with the pancetta. Season with salt and pepper to taste.

15. Sprinkle the potato mixture onto the dough and press it in with the flat of your hand. Press your fingers into the dough to make evenly spaced indentations all over the surface, being careful not to puncture or tear the dough.

17. Allow the baked focaccia to rest for about 10 minutes before cutting.

Note: For meatless version, drain the boiled potatoes and simply toss them in a bowl with extra virgin olive oil and a pinch of salt before pressing them into the top of the focaccia dough.

While I was waiting for the first proofing of the dough, I sliced the potatoes, cut my carrots, and peeled the cippolini onions. To cook the carrots and onions, I tossed them in olive oil, then seasoned them with salt, pepper, and fresh thyme. 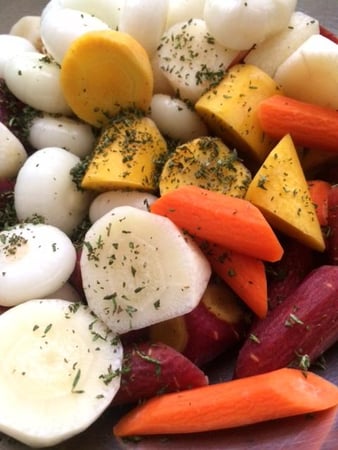 I roasted them in the oven on a sheet tray at 400 degrees for approximately 20 minutes, or until caramelized and tender. 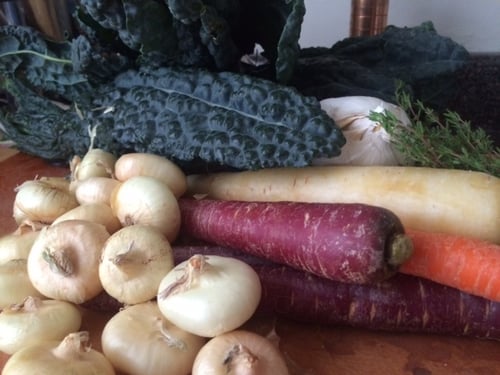 At this point, the focaccia was ready to be punched down and stretched for the second proofing. I like to add the toppings at this stage so that they really get into the dough as it proofs and don’t fall off if you add them after the dough is baked.

As I washed the kale and stripped the leaves from the stems, I started cooking the pancetta. Once the pancetta was fully cooked, I added some sliced garlic, and then cooked kale in all that goodness. 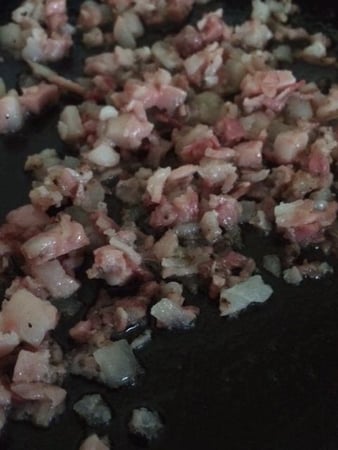 The two vegetable sides were completely finished and the focaccia was ready to be baked. As the focaccia baked, I seared the pork tenderloin and then rubbed it with a mixture of garlic, thyme, rosemary and olive oil. I finished the pork in the oven and warmed the vegetables at my friends’ home so that everything would be nice and hot.

Whether you are responsible for the full meal or not, focaccia is a great side dish to take to any dinner party because it’s a blank canvas. You can top it simply with sea salt, or one of my personal favorite combinations, grapes and blue cheese. Think seasonal!

Become a bread baker with the help of these upcoming bread making classes: