When you work for a recreational cooking school for almost 20 years, it may seem strange that other cooking classes interest you. My friends joke, "Isn't that just like work for you?" But in reality, I love to take classes at other schools, both in-person and virtually. Not only does it help me see what other businesses are doing, it gives me a renewed appreciation for what we do at The Chopping Block.

That's why whenever I travel, I try to take a local cooking class. I just booked one for my trip to Greece next month (more to come on that!) and when I realized I was going to be visiting my sister in New Mexico during green chile season, I booked a class at the Santa Fe School of Cooking.

Me, my sister Jillian, her husband Tab and Chef Allen Smith

You may remember my obsession with green chile (New Mexico's state vegetable) from my previous blogs. I've used them in enchiladas, burritos, burgers, cornbread, Buddha bowls, homemade pizza, even an apple pie. But let's review the facts about these chiles.

Chile peppers are grown all over New Mexico and originally by the Pueblo, but the major commercial production is in the Southern part of the state. The most sought after are called "hatch" chilies and grow in the Hatch Valley along the Rio Grande. They are similar but not quite the same to peppers called "Anaheim" found in other parts of the country.

New Mexico chilies typically grow from a green to a ripened red, and the chile has different flavors depending on how ripe it is. Green chile flavor has hints of onion and garlic with a subtly sweet, spicy, crisp and smoky taste. That smokiness comes from roasting the peppers to remove the tough skins. The ripened red adds an earthiness and mellowed out flavor due to the aging of the pepper. The spiciness depends on the variety of pepper.

This is the first time I've visited Santa Fe during green chile harvesting and roasting season which typically begins in August and runs through September. You can see the roasters set up at local grocery stores in the parking lots with their large steel cylinder cages that rotate over an open flame. It takes only minutes to char the tough skin of the chile and roast the inside meat of the pepper. The peppers are then sealed in a box to steam so that the charred skin can be removed before the peppers are put under refrigeration.

Locals can't wait for the smoky smell to permeate the city and snatch up as much chile as they can. One Albertson's supermarket in Albuquerque reports they sell 875 pounds of chile a day, and 170 cases a week. Luckily, for those who can't be in New Mexico during this time, you can get green chiles elsewhere fresh, canned or frozen and either chopped or whole roasted.

While I am constantly finding ways to use more green chile in my cooking, I'm always up for new ideas! Enter the Santa Fe School of Cooking's Green Chile Workshop. 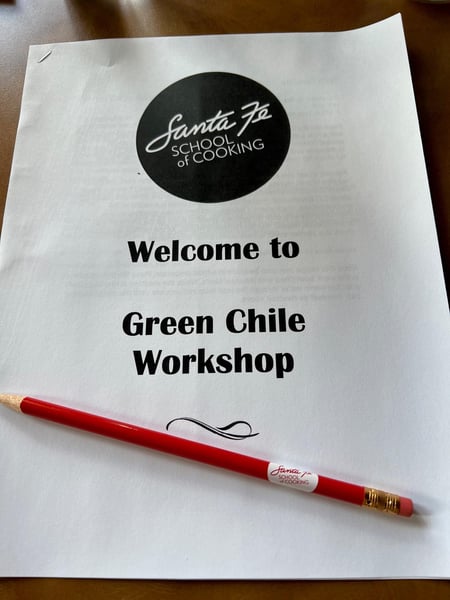 We had a little time to look around the cute shop before the class got started. As opposed to The Chopping Block, this school focuses on a selection of local ingredients, cookbooks and Santa Fe items that would appeal to tourists. It's definitely a smaller retail selection than we offer, but considering the majority of their students seem to be tourists, I think it's a smart call. Even I couldn't resist getting a few items myself! I recently tried the Hatch red chile salt on roasted broccoli, and it was delicious and the perfect balance of salty heat. 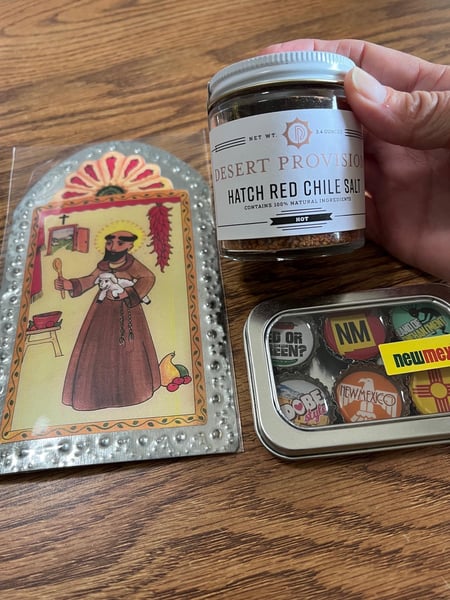 Did you know that San Pasqual is the Patron Saint of cooks and kitchens?

We were led to a beautiful kitchen with tables and a long kitchen counter. The kitchen actually reminded me of our Saffron kitchen at the Merchandise Mart because it had a long mirror so you could see what the chef was doing. They even had big screens to show multiple things happening in the kitchen at once.

This class was part lecture about chiles and then part hands-on cooking. I love a good demonstration class so I especially enjoyed learning more about the green chile and equipment like the asado, which is basically a cage placed over an open flame that is used to roast chiles. The school has theirs custom made for them that fit over stovetop burners as well as portable gas burners, which is what we used during the class. Without an asado, you achieve the same char on vegetables using a grill or even your oven's broiler. 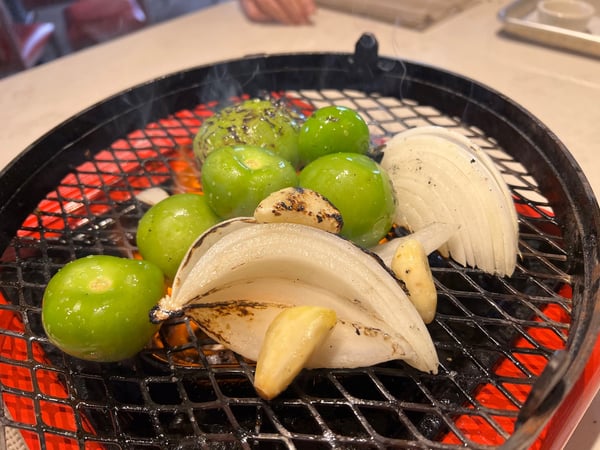 Executive Chef Allen Smith explained how a true green chile sauce has only two ingredients: chile and water but promised us the sauces we would make would be more interesting. He also discussed how to tame the heat of chiles by using salt and/or sugar. Balancing flavors is definitely something we cover in The Chopping Block's own Flavor Dynamics class. 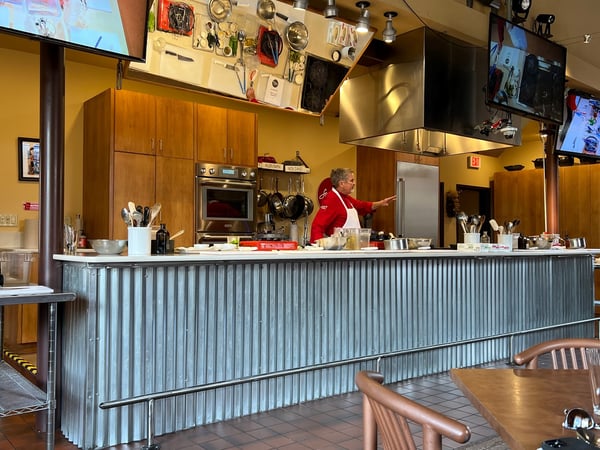 After a demonstration on how to make corn tortilla dough, press it in a tortilla press and cook the tortillas by Chef Noe Cano, all 16 students were let loose in the kitchen!

We washed up and proceeded to introduce ourselves to the other students and discuss how we were going to divvy up the responsibilities of making three sauces and tortillas. This part was a little chaotic and made me appreciate the organization The Chopping Block brings to our hands-on classes. Since we were a three-top (me, my sister and her husband), we paired up with another couple who made the Roasted Tomatillo Salsa while we worked on the Green Chile Sauce and a Green Chile, Mint and Tamarind Sauce.

The first step is to roast the chiles on the asado over an open flame. There's no need to coat the pepper in oil, just roast it dry. 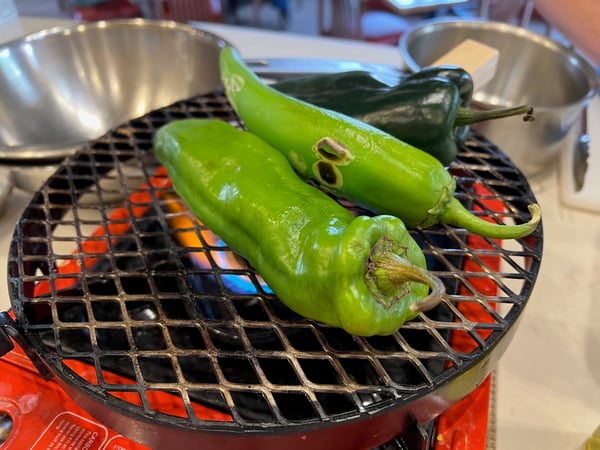 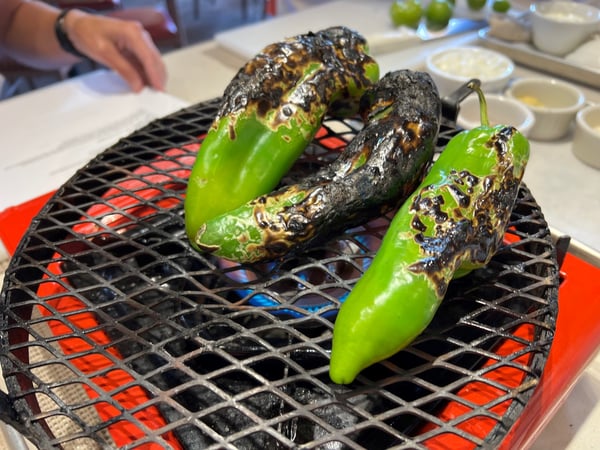 You want to be sure to get the entire pepper charred in order to be able to remove the tough skin so use a pair of tongs to turn the pepper.

While the peppers roasted, my sister worked on prepping the other ingredients such as chopping the herbs and a jalapeno pepper for one of the sauces. 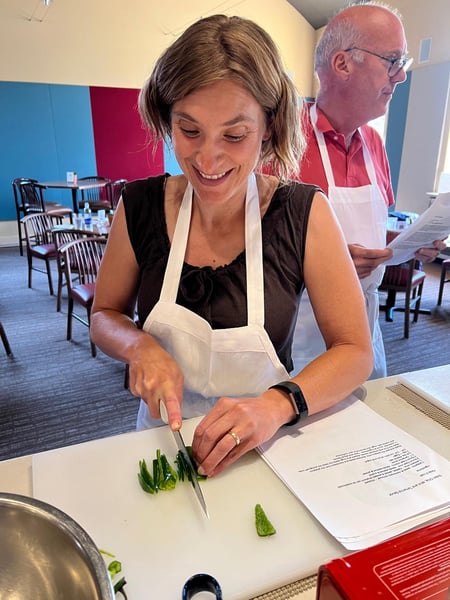 This school creates trays of mise en place (a French term for "everything in its place") just like we do at The Chopping Block. All of the ingredients are measured out for the students in advance. 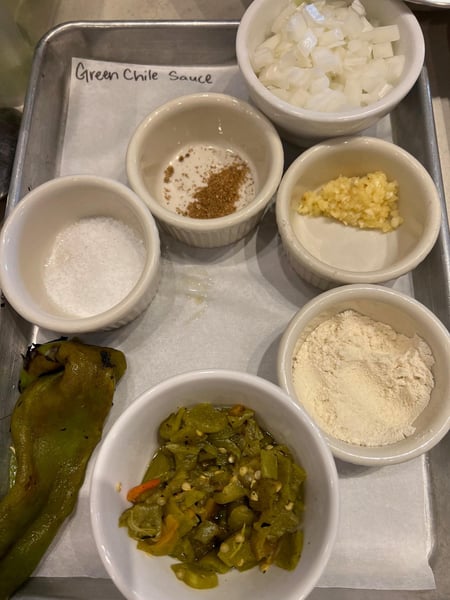 Other than roasting of peppers and vegetables, only one sauce had to cook on the stove, the Green Chile Sauce. Chef Allen said this particular recipe has a French influence since it is thickened with flour. However, we used masa harina instead, which is very finely ground corn. It's so fine it has the consistency of powder and is used for making corn tortillas, tamales and many other Latin American dishes. Chef Noe used it to make our tortilla dough.

We started by sautéing onion in a little olive oil. 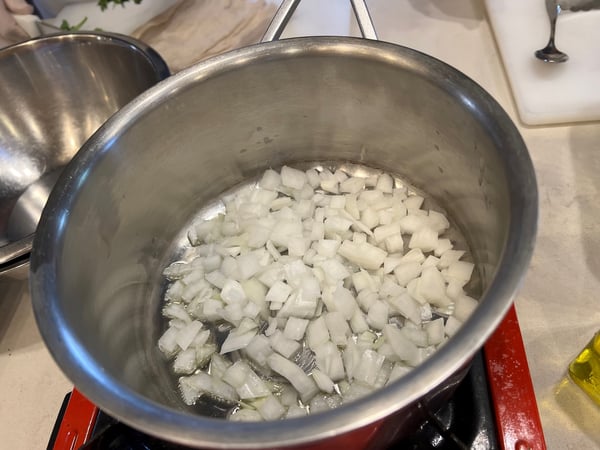 Then we added some garlic, the masa harina, green chile and coriander and added water. Once it comes to a boil, simmer for about 15 minutes. Season with salt. That's it - it couldn't be a simpler sauce that is packed with flavor! 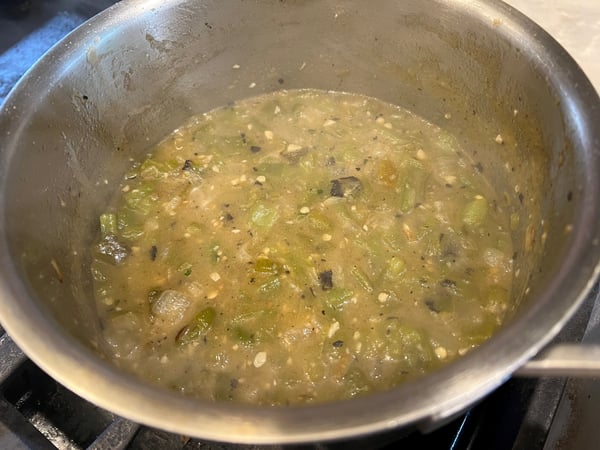 The Roasted Tomatillo Salsa was finished with a few pulses in the food processor, so it came together very quickly. 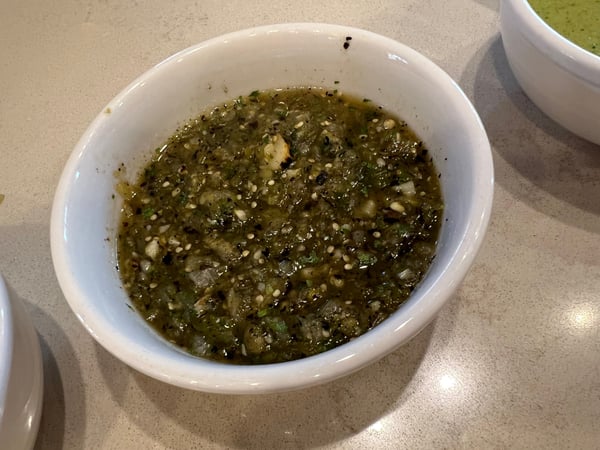 And the Green Chile, Mint and Tamarind Sauce (the middle sauce below) was pureed in a blender. This one was our favorite! Once all three sauces were done, we lined them up on the counter. 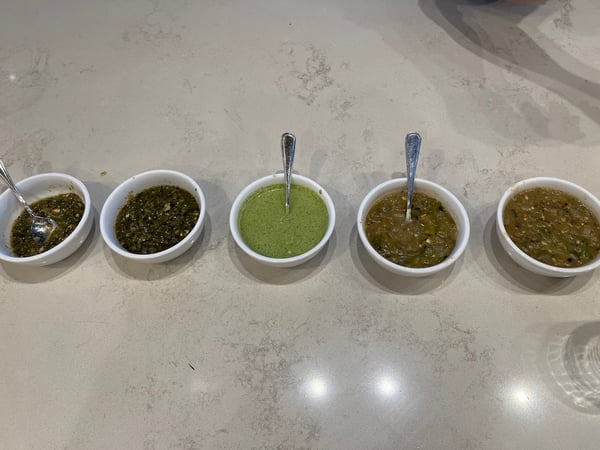 Then we turned our attention to the tortillas! The dough Chef Noe made at the beginning of class was divided among the groups and we were able to roll it into balls and press into tortillas using a press. 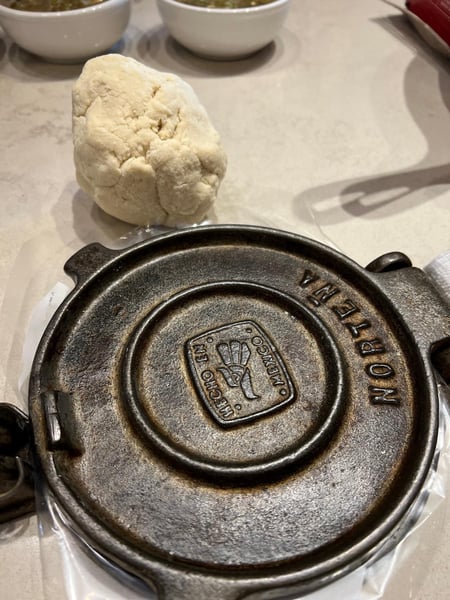 A trick I learned in this class was to have two pieces of plastic (they used Ziploc bags cut into circles) so that your tortilla press doesn't get dirty. It reminded me of how we wrap our bamboo rolling mats in plastic wrap for our Sushi Workshop here at The Chopping Block. 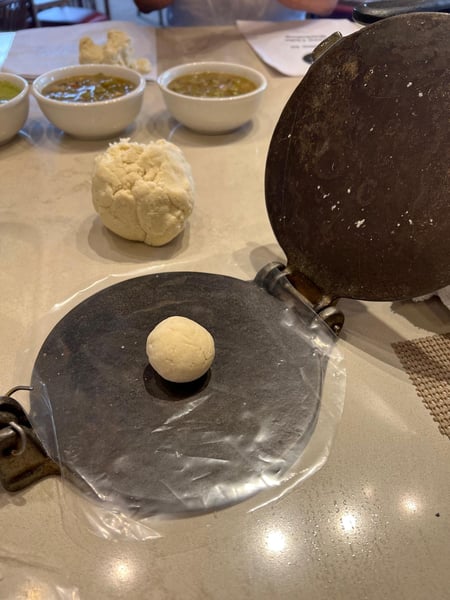 There was plenty of dough so that everyone could press as many tortillas you liked. 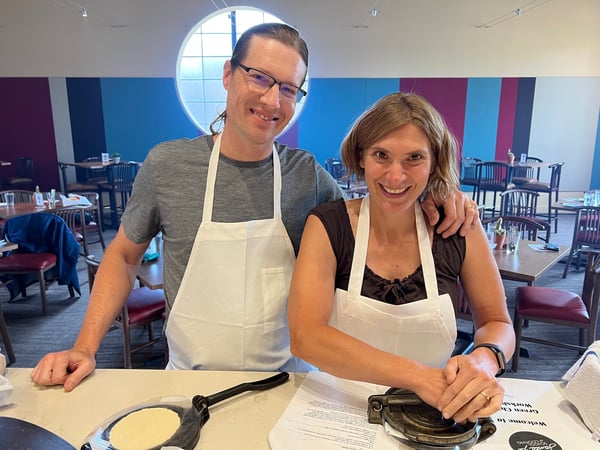 One of my favorite moments in this class was when I looked over at the woman cooking next to me who was pressing the tortilla press down with her hand and using her body as force. Once I showed her how to use the handle to press down and use the lever instead of her weight to get the tortilla thin. She was amazed, and we all had a good laugh!

As the dough was pressed into tortillas, we also worked on cooking them in very hot cast iron pans. You could also use a griddle. No oil in the pan is necessary. Cook for about 1 minute on the first side. 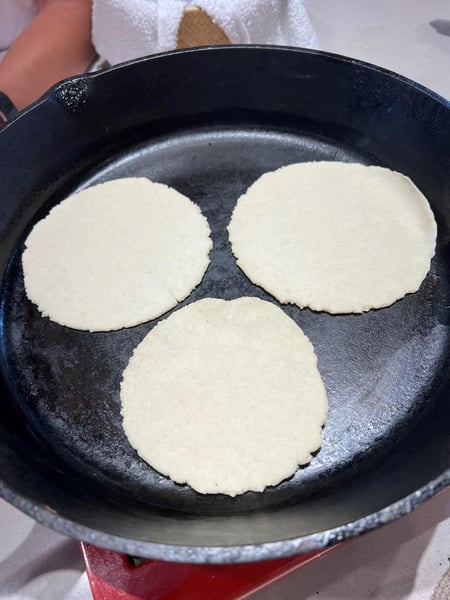 Flip the tortilla and cook another minute on the other side pressing down with a spatula to keep the tortilla flat. You want light brown speckles to appear.

As the tortillas were cooked, we placed them in a basket lined with a kitchen towel to keep them warm. 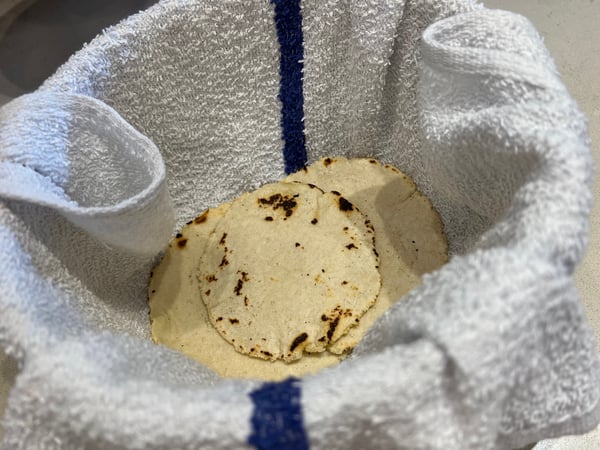 Once all of the tortillas were cooked, all of the groups lined up their sauces and tortillas and we were encouraged by the chefs to not only taste our own, but all of the other sauces made in the class. Just as Chef Allen predicted, no two sauces were exactly alike.

We had a great time at our cooking class and now I have three more sauces to use up those green chiles in the freezer. I can't wait to make the Green Chile, Mint and Tamarind Sauce. I think it would go perfectly with any roasted vegetables from carrots to cauliflower. You could even use it as a dip for crudite!

Our experience at the Santa Fe Cooking School was fun and yielded some delicious food. It's a place I've been wanted to check out for a while, so I'm glad I did so with my family during chile roasting season. One tip - whatever you do, don't spell chile with an "i" (chili is a stew, not a pepper!) lest you face ridicule by the locals. 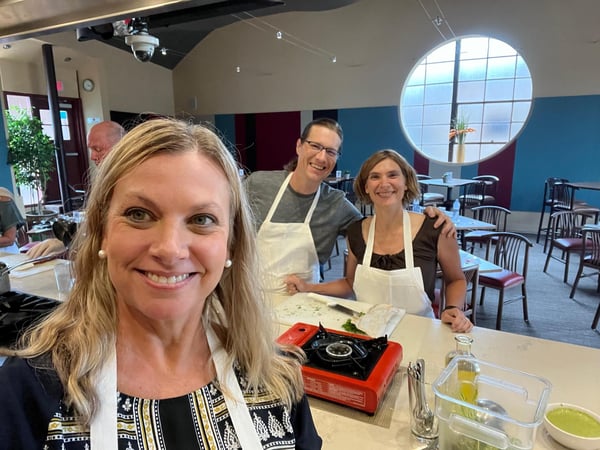 New Mexican cuisine is definitely different than Mexican food due to its distinct use of chiles, but we have a great Mexican class coming up at The Chopping Block: La Cocina Mexicana on Saturday, September 24 at 6pm at Lincoln Square. Here's the menu:

Our October classes will be released tomorrow, so be sure to check out our class calendar and sign up for a class to get inspired in the kitchen!