You may have noticed an abundance of kimchi on menus lately. Korean flavors have been named one of the hottest summer food trends of 2018. We are lucky that we have one of the great experts in this type of cuisine right here in Chicago (and coming to The Chopping Block in 1 week!), award-winning Chef Bill Kim.

Born in Korea but raised in the American Midwest, Bill brings these two sensibilities together in his first cookbook, Korean BBQ, translating Korean flavors for the American home cook in a way that is friendly and accessible. This isn’t a traditional Korean cookbook but a Korean-American one, based on gatherings around the grill on weeknights and weekends.

Bill's expansive culinary background spans a wide range of varied cuisines. After studying classic French cooking at Kendall College, he pursued opportunities to work alongside industry greats including Pierre Pollin at le Titi de Paris in Arlington Heights, IL and Jean Banchet at Ciboulette in Atlanta. From there, Bill served as sous chef at notable kitchens throughout the country including the renowned four-star Charlie Trotter’s in Chicago, Bouley Bakery in New York and Susanna Foo in Philadelphia. After several years on the East Coast, he was drawn back to Chicago to serve as chef de cuisine at Charlie Trotter’s before taking the helm of French-Asian Le Lan.

Bill is widely considered to be a pioneer in the movement of fine dining chefs introducing casual concepts. In 2008 he opened urbanbelly, a bustling communal-seating restaurant featuring creative and soul-satisfying noodle, dumpling and rice dishes. In August 2012, Bill opened bellyQ, a modern Asian barbecue concept.

In Korean BBQ, Bill teaches the fundamentals of the Korean grill through flavor profiles that can be tweaked according to the griller’s preference, then gives an array of knockout recipes. Starting with seven master sauces (and three spice rubs), you’ll soon be able to whip up a whole array of recipes, including Hoisin and Yuzu Edamame, Seoul to Buffalo Shrimp, BBQ Spiced Chicken Thighs, and Honey Soy Flank Steak. From snacks and drinks to desserts and sides, Korean BBQ has everything you need to for a fun and delicious time around the grill. 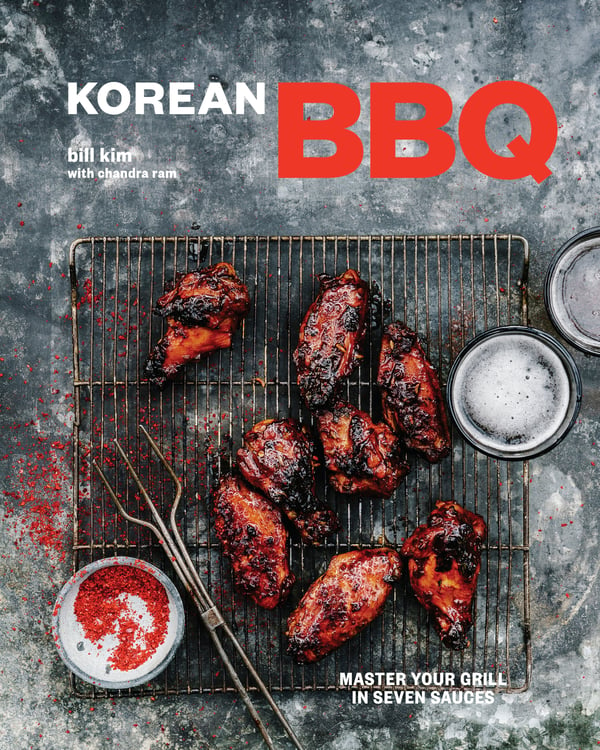 Since the cookbook's release in April, it's gotten rave reviews from many, including The New York Times.  You can get your own copy in just one week at a very special, intimate cooking class and book signing with Bill. Space is limited so get your tickets now.

In the class, Bill will show you how to make Seoulthern Pimento Cheese, Korean BBQ Skirt Steak with Cucumber and Onion "Kimchied Salsa" and Korean Milk Chocolate Pudding. Seriously, could this skirt steak look any more delicious? 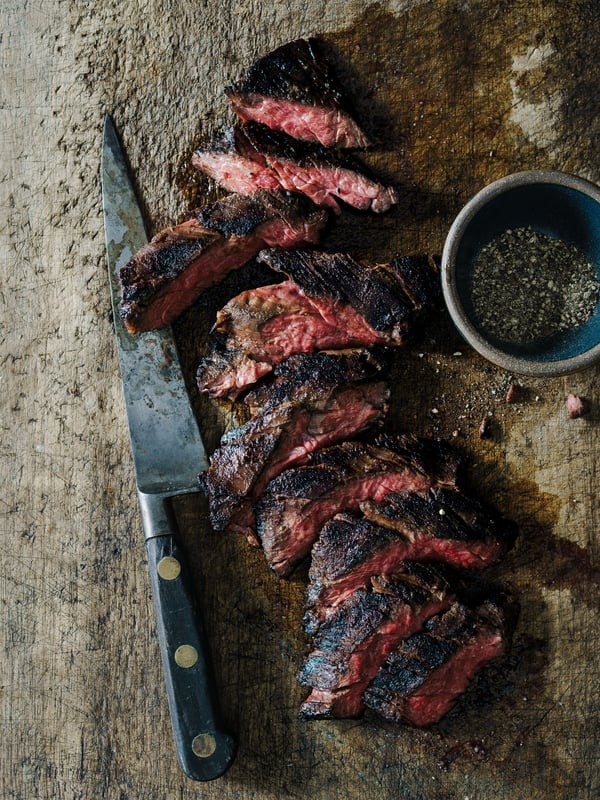 You'll enjoy Bill's tips on making these three dishes as you get a generous tasting of them and a glimpse into his stories and inspiration for the book. You'll also take home a signed copy so you can add Korean flavors in your own kitchen. The book includes 80 recipes tailored for home cooks with suitable substitutions for hard-to-find ingredients.

Join us on Friday, June 22 from 6pm-8:30pm at The Chopping Block at the Mart for this special event!

Bill is a longtime friend of The Chopping Block and even cooked for one of our employee parties back in the day. He shared a couple more recipes from his cookbook as a special treat for our readers. Give them a try this weekend!

I like to say my food is Korican—half Korean, half Puerto Rican—the perfect balance of Zen and fuego. You can taste it in how the Korican Sauce is used in this recipe, as a marinade for the pork and as the basis for a punchy, bright, acidic Korean chimichurri. I was raised on inexpensive variety packs of pork chops, which contain razor-thin slices of meat on the bone. It blew my mind when I learned that pork chops come in different thicknesses and sizes. I still like my thin pork chops, however, as they are easy to cook and marinate in no time. If you can’t find thin pork chops, add a couple of minutes to the grilling time on each side. 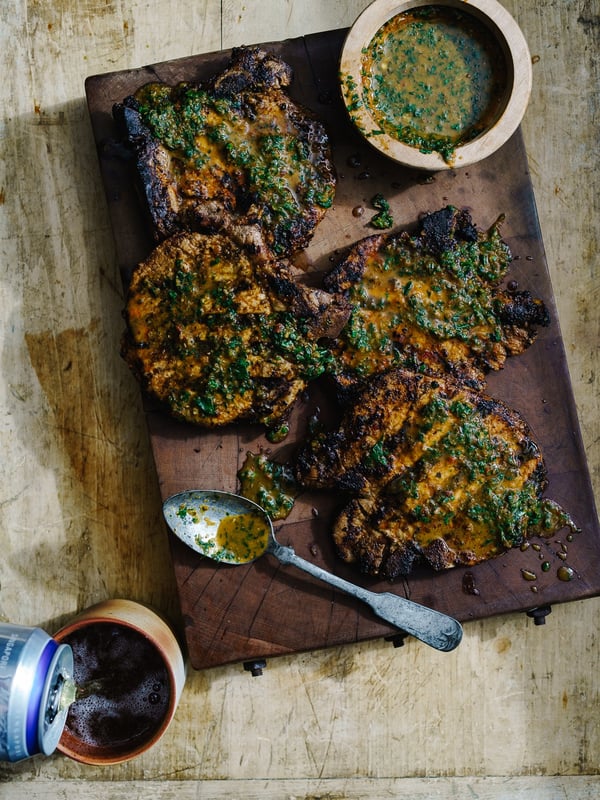 Place the pork chops in a large, shallow dish, pour 2 cups of the Korican Sauce over the chops, and turn the chops to coat evenly. Cover and marinate at room temperature for 20 minutes or preferably in the refrigerator for at least 4 hours or up to overnight.

While the pork is marinating, make the Korean chimichurri. Combine the Nuoc Cham Sauce, remaining ¼ cup Korican Sauce, parsley, cilantro, and sambal oelek in a food processor and process for about 1 minute, until smooth. Set aside at room temperature.

Once I married a Puerto Rican woman, my food became what we call a little Korican, and that’s what this sauce is all about. I learned this recipe from my mother-in-law, Dolores Alicea, aka Doe or Lola. Let me tell you, the best Puerto Rican restaurant in town is her house! When I tasted her turkey lechon at our first Thanksgiving together, it was all over for me. The bright flavors, the spiciness from the garlic, the tanginess from the vinegar—everything was new to me. From the moment I tasted her sauces, I knew I had to learn how to make them. I never put vinegar in my marinades until I met Lola, but I understood why cooks put alcohol in marinades, and this is similar: it tenderizes and accentuates the flavors. Now, her cooking is part of my DNA. I had to add it to my arsenal of kitchen techniques, but of course, I made a few changes to kung fu it.

Combine the paprika, oregano, chili powder, curry powder, salt, vinegar, garlic, and oil in a small bowl and whisk until well mixed. Transfer to an airtight container and refrigerate for up 2 weeks or freeze for up to 2 months (see note).

NOTE: This sauce won’t fully harden when frozen, so you can spoon out as much as you need whenever you want to use it.

I learned about nuoc cham from Arun Sampanthavivat, whose Chicago restaurant, Arun’s, is considered to be one of the best Thai restaurants in the world. Nuoc cham is a Vietnamese dipping sauce with big, bright flavors; it’s tangy, funky, sour, and sweet all at once. I add green Thai chilies to give it some heat and use it not only as a dipping sauce but also as the base for marinades and dressings. This sauce is also a great foundation for things you wouldn’t consider very Asian, like my Korean pesto (page 46) and even my pimento cheese dip (page 66).

One of the great mysteries for me when I go out to traditional Korean barbecue restaurants in America is that they all serve the same generic mayonnaise-based potato salad that you can find in the deli section of any grocery store in the country. Who said potato salad was a Korean banchan (snack or side dish), anyway? I always shake my head when the mayo potato salad hits the table and think that it would be so much better to combine potatoes, which are pretty mild, with kimchi. This recipe is my chance to prove my point! 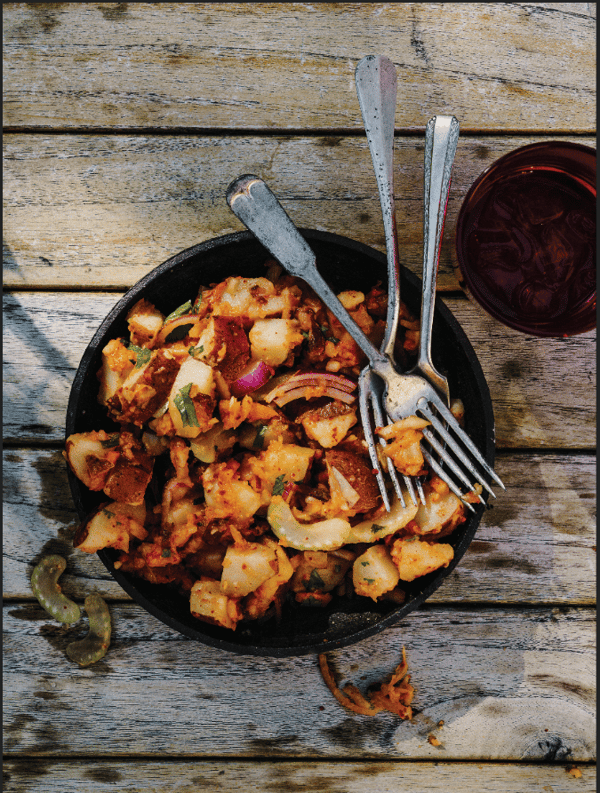 Place the potatoes in a large saucepan, add water to cover, and bring to a boil over high heat. Turn down the heat to a simmer, cover, and cook for about 30 minutes, until tender when pierced with a fork. Drain the potatoes and cut them into smaller pieces if you like.

Place the Nuoc Cham Sauce, ½ cup of the kimchi, and the horseradish in a food processor and process for about 1 minute, or until well blended and smooth. Transfer the sauce to a large bowl and stir in the remaining 1 cup kimchi, celery, onion, and cilantro, mixing well. Add the potatoes and toss to coat evenly. Cover and refrigerate until you are ready to eat. It will keep for up to 3 days.