If I had a nickel for every time i was asked that question, I’d have… well, I’d have a lot of nickels! Most people are aware of tofu, and even tempeh, as major vegan protein staples, often used as meat substitutes. Both are great, but one of my favorite staples is seitan, and it’s one of the most popular staples in the vegan world.

Seitan (pronounced say-tan), originating from Japan and translating out to “made of protein” is a product made from vital wheat gluten, a natural byproduct of wheat which is made into a flour. It has very little starch, and is almost all, well, gluten. Gluten provides elasticity and structure in various doughs like bread, pizza, and pasta, and is “activated” when the dough is kneaded. Seitan (also called “wheat meat”) is made in a similar fashion to bread dough, where it’s mixed with a stock or water, and is then poached, steamed, or baked to solidify its structure, and give it the tear and chew that are reminiscent of meat. Once at this stage, it can be used as a meat substitute in various recipes.

There are many amazing seitan products that are available for purchase at many health food stores, and almost every vegan restaurant in the city has a few dishes with seitan.

One good thing about seitan is that it's also pretty easy to make, and my recipe is a good simple base to add your own flavors to. I do cut the seitan mixture with chickpea flour which helps keep the seitan from being too dense. I also add nutritional yeast, which helps give a much needed umami taste.

One very important thing to know when making seitan is that the liquid you add to your dough must be cold. Cold liquid will prevent the gluten from absorbing the liquid too quickly, which will make it easier to knead (which if you have ever kneaded any other dough, you will find that seitan can require a little more muscle to knead). 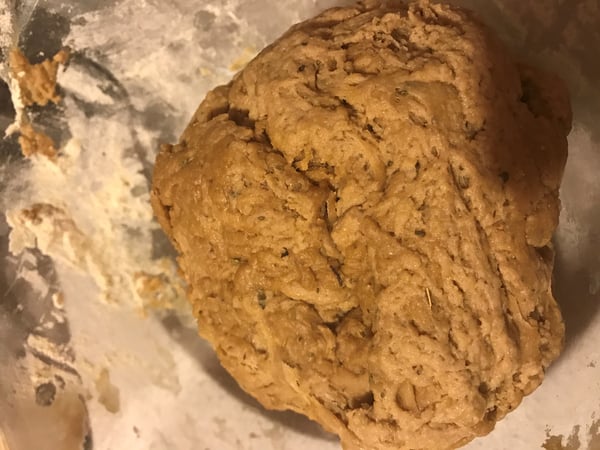 Personally, I’m not a big fan of poaching seitan, because the dough continues to absorb liquid, which can make the seitan rather gristly in texture. My preferred method is baking or steaming, so I will give instructions for both.

Seitan Base (see variations below):

Knead the seitan in the bowl for 3-5 minutes, or until it’s one mass. It should spring back if you poke it with your finger. It may take a little more pressure to knead it, but keep at it. It will come together.

Once the seitan is done, remove it from the foil to cool. Proceed to add to your favorite recipe, such as kebabs, gyros, chops, ground for stew, and many more.

These are some seitan flavor variations I’ve made before (all for mixing in with the dry ingredients). Feel free to experiment with any flavors you like!

Whether you purchase seitan or make it from scratch, you will see that seitan is one of the best meaty staples for your plant-based pantry.

Want to learn more great vegan recipes? Sign up for our Vegan Desserts cooking class (created by me!) on Sunday, June 25 10am at The Chopping Block's Lincoln Square location.