Preparing the Thanksgiving feast is a huge undertaking. First, there’s the menu planning and remembering to accommodate all of the tastes and dietary restrictions in your group. Then, there’s the shopping. Next, there’s the cooking, including timing everything so that dishes are piping hot when they reach the table. We won’t even mention the clean-up!

Twenty years ago, in the first year The Chopping Block opened its doors in Lincoln Park, Owner/Chef Shelley Young taught our very first Thanksgiving Crash Course. The name has changed slightly over the years, the menu has been tweaked a bit, and we’ve since closed our Lincoln Park location, but overall this class is exactly the same today as it was back in 1997. 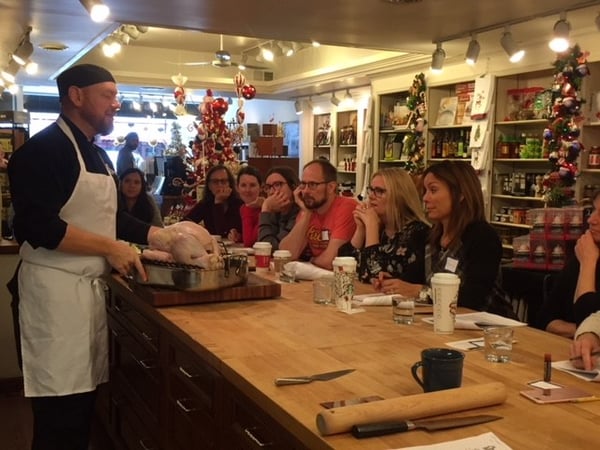 Karla Brewer moved into the Lincoln Park neighborhood with her husband Andy after getting married in 2002 and took her first Thanksgiving Crash Course in 2003. This year will mark her 11th year of taking the same cooking class!

Yes, you read that right. Karla has been taking the same Thanksgiving class from The Chopping Block for 11 years. She took a few years off when she and Andy moved to New Jersey for a few years, but it’s now an annual tradition.

“The day I take the Thanksgiving class is the day the holiday season officially kicks off for me. I take the class then start my holiday shopping at the stores in Lincoln Square with friends. In fact, several of my friends now join me for the class every year. It’s become our annual tradition,” said Karla.

Here are Karla and her friends Rachel, Joan, Amy and Marcy in this morning’s Thanksgiving Crash Course at Lincoln Square. 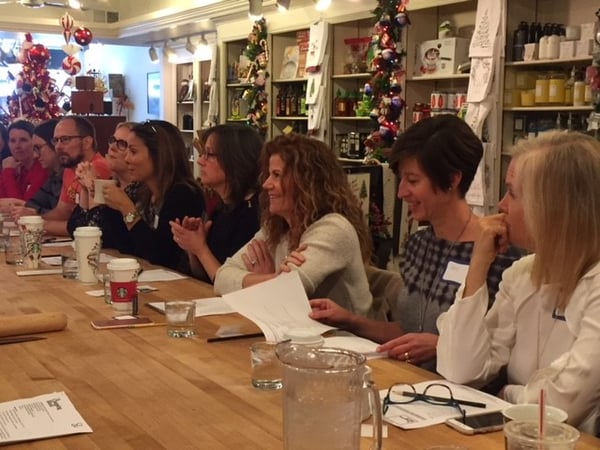 Why take the same class every year? Isn’t it repetitive? Karla says no, because she continues to learn something new each year. “Every chef has their own tips and techniques. Even though it’s the same recipes, I learn something new from each chef. I’ll add notes from this year to my packets, and I still have my very first packet from 2003 when Shelley and her mom taught the class together,” said Karla.

She prefers daytime demonstration classes versus hands-on (though we do offer a Thanksgiving Workshop class for those of you who prefer that style) and Karla loves the intimate feeling of our Eggplant kitchen at Lincoln Square. “I call first thing when the November class calendar comes out, and I’m always the first one to sign up,” said Karla. 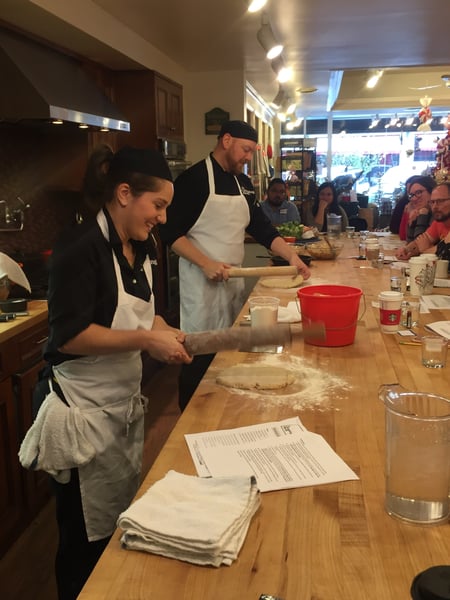 “Before I was married, I knew how to make a great scrambled egg sandwich and heat up Campbell’s soup, and that was it. One day I was attempting to make a cake and my beater died on me, and I walked into The Chopping Block on Webster Ave. and saw there was a cooking class going on. You could buy equipment there too! I signed up for the Building Block series, and learned how to make an entire meal in one class. I went back the following Monday and the next and the next. I literally went to every single Building Block class, and I still have a huge notebook with all of my recipes and notes,” said Karla.

For those of you unfamiliar with our Building Blocks classes, it was a series of 24 menus that focused on cooking techniques in approachable menus designed for home cooks. You could take all of the classes or just pick and choose the menus that spoke to you. A lot of those classic recipes are now part of our Culinary Boot Camp program.

Karla remembers Shelley and Chef Sara Salzinski taught a lot of the cooking classes back then, but she’s enjoyed meeting different chefs over the years. Karla says her classes at The Chopping Block helped her confidence level in the kitchen go through the roof. “I still think it’s funny that my friends think I’m such a good cook. Cooking wasn’t so intimidating when I watched the chef do it all in front of me. I totally credit The Chopping Block, the chefs and the Building Block series for making me a confident cook,” said Karla.

Karla remembers preparing her very first Thanksgiving meal. It was just she and Andy, but she made the entire Thanksgiving Crash Course menu with all 12 dishes just to prove that she could do it. She makes the Maple-Glazed Brussels Sprouts and Roasted Root Vegetables every year, but changes things up year to year.

“My husband and I grew up in the South so we always have white rice and gravy instead of Mashed Potatoes. I can’t pick a favorite dish from this menu, and I do add other dishes to it. However, having this menu and recipes takes some pressure off of me. My family has our recipes and my husband has his, but The Chopping Block’s Thanksgiving has become my family’s Thanksgiving. I don’t have to decide between sides and who’s stuffing to make. I’m always going to do Shelley’s stuffing,” said Karla.

One other thing that’s changed over the years is that instead of baking her own pies, Karla picks them up from The Chopping Block during the Thanksgiving week. “It just makes my life easier,” she says. “I’m not as exhausted and it allows me to be more relaxed and have fun with my guests. Making Thanksgiving dinner is hard work!”

If you haven’t taken our Thanksgiving Crash Course yet (or even if you have!), don’t miss these upcoming sessions this month:

And if you want to be like Karla and get some help with dessert this Thanksgiving, order your holiday pies now or download our Thanksgiving Survival Guide.