The Chefs Who Have Cooked in our Mart Kitchens

I've been working for The Chopping Block for 20 of our 25 years in business. I've worked in each of our three locations in Chicago: Lincoln Park, Lincoln Square and the Merchandise Mart and for the past ten years (way before COVID made it cool), remotely from Florida.

I remember walking into the Mart space more than 17 years ago for the first time and my mouth dropping at the sheer size of it. At the time, I was still managing little Webster Avenue with its one very small kitchen that could only accommodate demonstration classes. My next job would be to manage the 8000 square foot Mart location with three different kitchens (we later added a fourth) and build a private event business there. 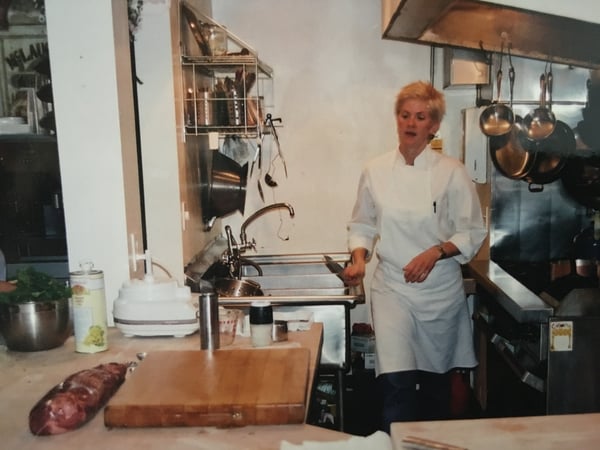 I will never forget the very first private cooking event we hosted in the Mart. It was for our investor, Ken Krengel and about 20 of his guests, so the stakes were high. Chef Peter Tignor and I set up, taught the class and cleaned up. Since this was before the best dishwasher in Chicago, John Redmond joined us a few months later, it was a wakeup call that we needed more help. The event was two hours long, and it took the two of us over four hours to clean up. After that, we quickly worked to scale the business to be able to host larger events and classes, eventually growing to serving 300 people in the space at once. 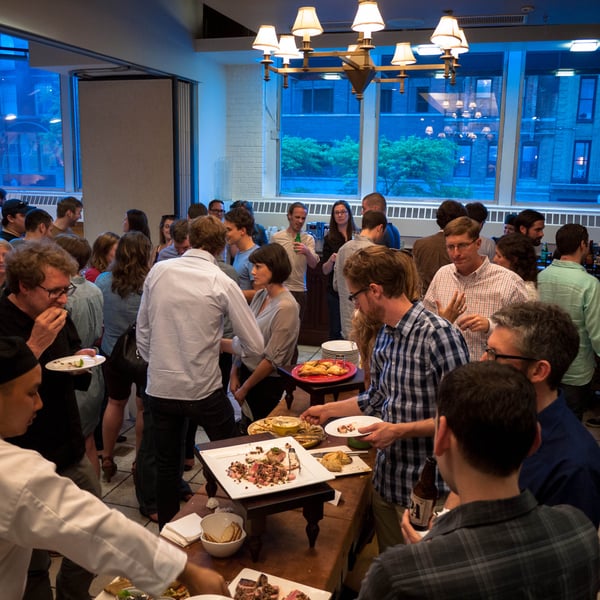 An all-venue event at the Mart

When I think back over the 17 years we've had the Mart location, the most prevalent memories are of all of the esteemed chefs who have walked through those doors and cooked in those state-of-the-art kitchens. I've gotten the chance to work with some of the biggest celebrity chefs in the industry and learned even more from The Chopping Block's chef instructors. I've done my best to scour our photo archives to piece together the illustrious history we've had at that space. Bear with me as some of these photos were taken well before the time of smartphones with cameras.

The most celebrated chef we ever hosted at the Mart was Anthony Bourdain, who we welcomed to our kitchens in 2006 for his book tour for Don't Try this at Home. He was professional, hilarious, and ever so cool in his black leather jacket. I remember he requested a six-pack of Heineken to be in the kitchen (this was well before the craft beer days!). Those of us who worked this event way back then were so excited to meet him in person. He was someone many of us idolized, myself included, and still do to this day despite his passing in 2018. 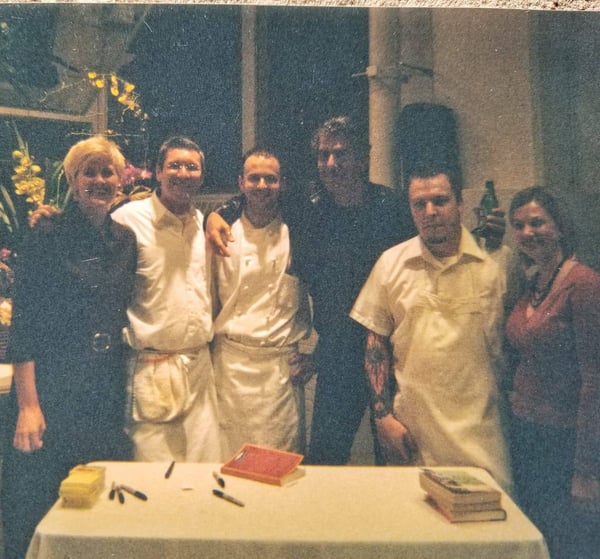 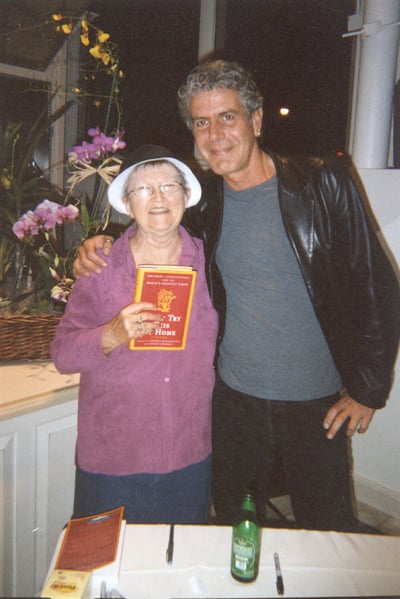 See the bottle of Heineken on the table?

Stephanie Izard became the first female winner of Top Chef in 2008 and hosted a dinner in our kitchen at the Mart in 2009 to preview her new restaurant Girl and the Goat which opened in 2010. She obviously now has a restaurant empire, and we have been rooting her on since the very beginning of her career!

Stephanie Izard's dinner at the Mart in 2009

Stephanie certainly wasn't the only Top Chef contestant to visit The Chopping Block. In 2009, Carla Hall cooked with Shelley for a fundraiser, and they shopped the Green City Market for their groceries that morning. I was lucky enough to tag along and document the day. 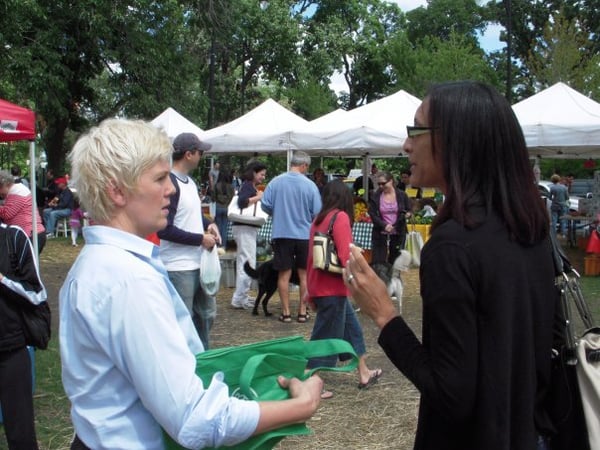 Shelley and Carla Hall shopping the Green City Market in 2009 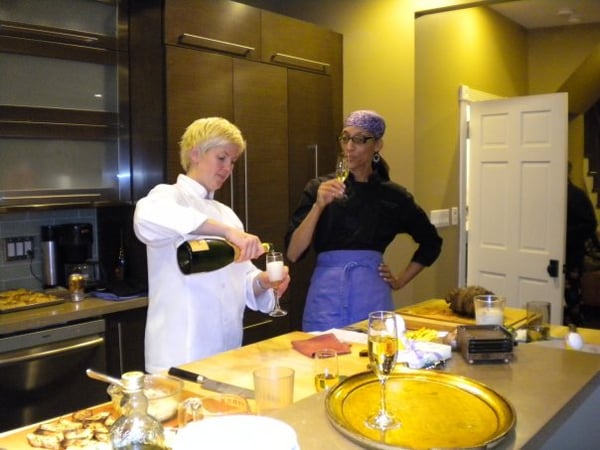 Dale Levitski and Casey Thompson, also of Top Chef fame, participated in a fundraiser for TrueChild in 2010. 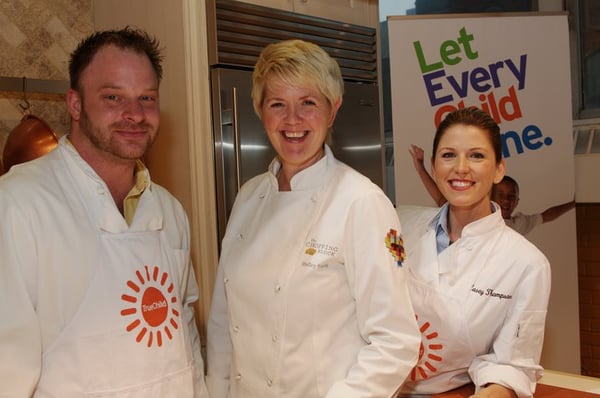 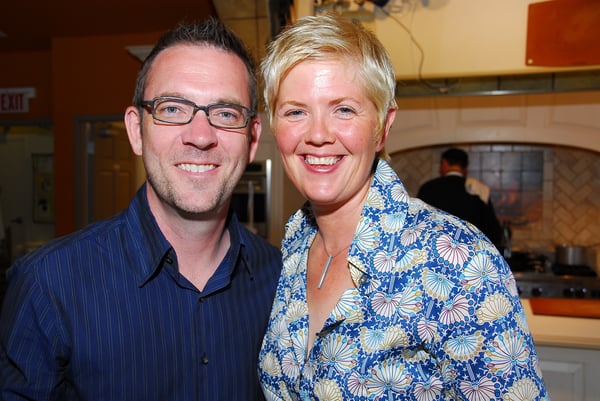 Former food editor for Gourmet magazine Lillian Chou traveled all the way from Beijing to teach two Chinese cooking classes at the Mart in 2010. She and Shelley remain close friends to this day. Lillian recently gave Shelley another lesson in Chinese cooking for one of her recent blogs. They were really fired up to be in the kitchen together again! 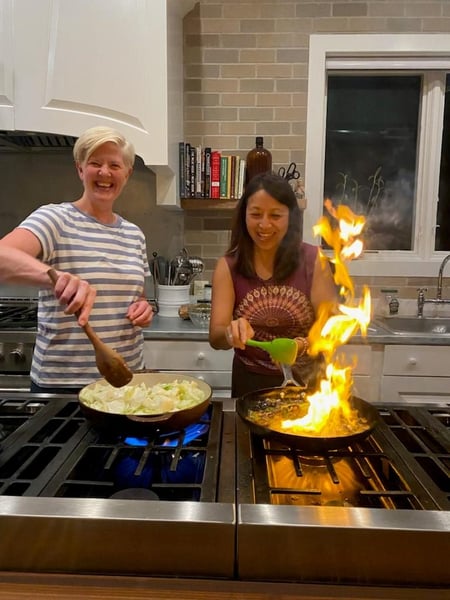 Shelley Young and Lillian Chou cooking in the "barn" in Michigan

Another legendary chef Shelley is lucky to call a friend is Diana Kennedy. Diana who is now 99-years-old(!) is an authority on Mexican cuisine and has written nine books on the subject. We were honored to have this legend and the subject of the documentary Nothing Fancy in our kitchen to teach a class in 2010. 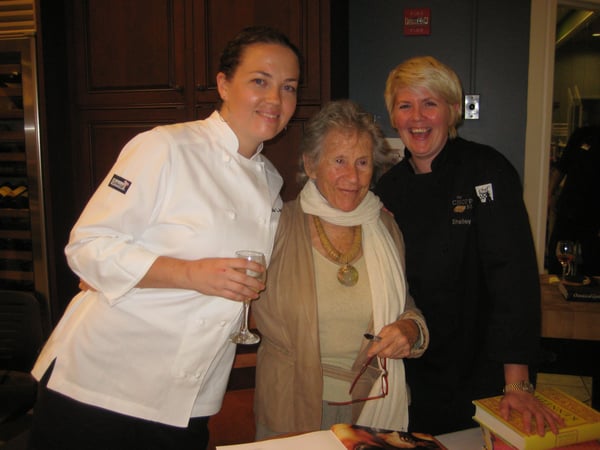 Rick Tramanto joined us in 2010 to promote his book Steak and Friends. He's known as the "tattooed toque" for his large "Chef" and "Faith" tattoos. 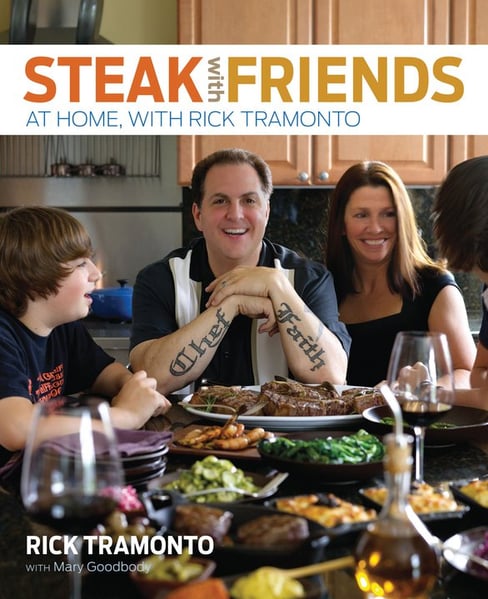 One of my favorite chefs, Michael Ruhlman, taught from his Ruhlman's Twenty (a cookbook I still use today) in a class in 2011. I may have had a bit of a crush on him back then, and I wished someone would have told me how truly horrendous my bangs and hair color were! 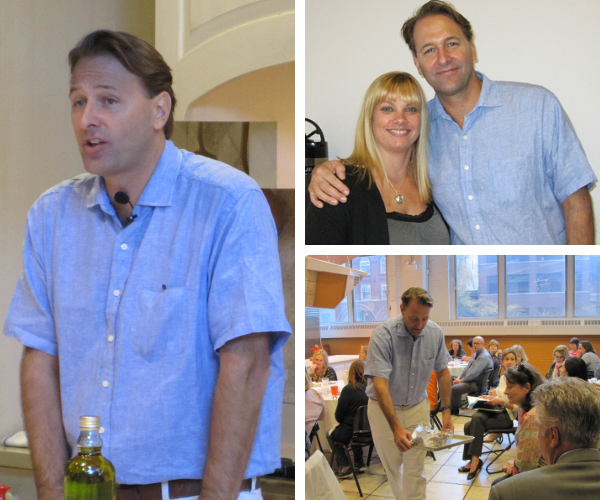 Michael Ruhlman and me

Charlie Trotter's good friend and Chef Norman Van Aken stopped by to cook from his cookbook My Key West Kitchen in 2012. 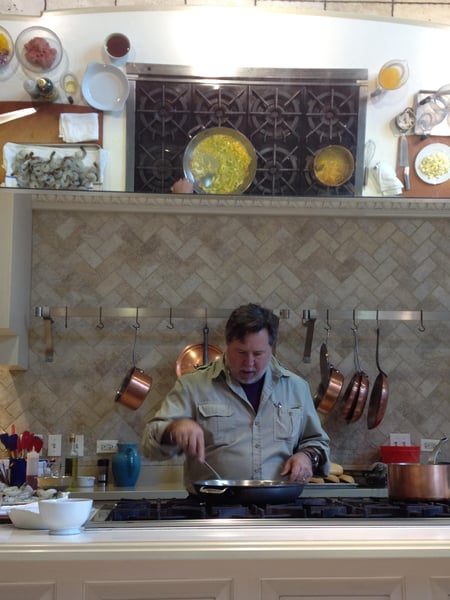 Our events and classes at the Mart always presented the very latest in culinary trends, and we had Rick Gresh, who at the time was the chef at David Burke's Primehouse, host a salt block cooking class in 2013, way before you could buy salt blocks at Bed Bath and Beyond! 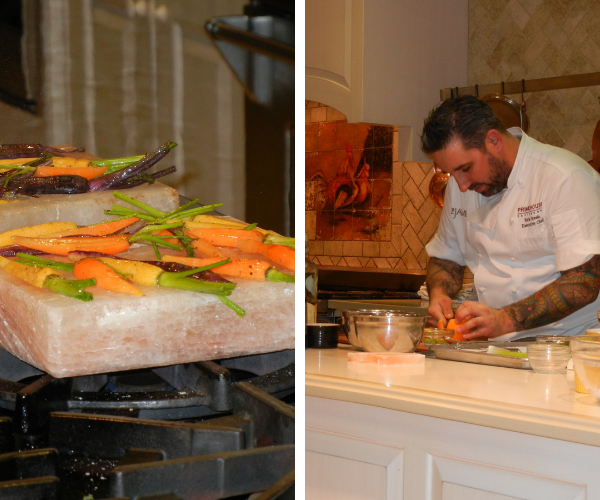 Mindy Segal, formerly the chef of Hot Chocolate and now Mindy's Artisanal Edibles, put us all in a cookie coma with her cookie class to promote her Cookie Love cookbook in 2015. 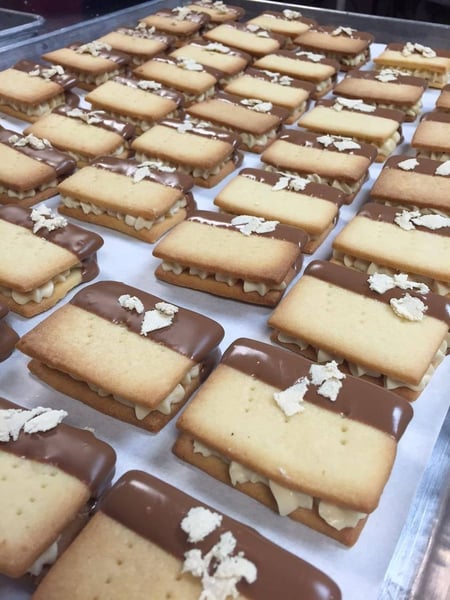 There are a lot of chef friends who graced our presence many times over the years. Ming Tsai was a guest at Webster a long time ago, before joining us for Customer Appreciation Day in 2010 and again for a cooking class in 2012 to promote his Simply Ming: One Pot Meals cookbook. 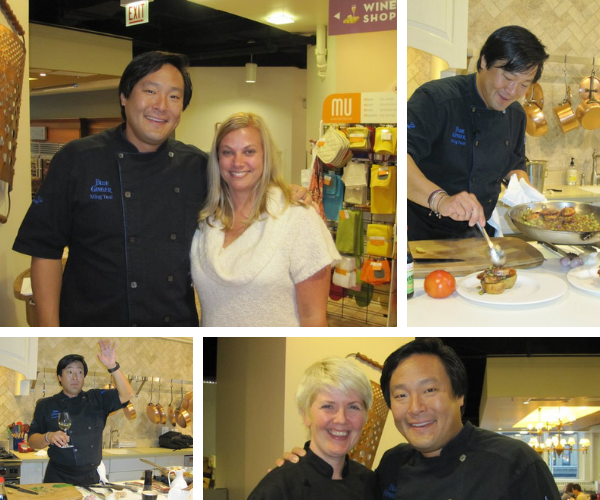 Ming Tsai with me and Shelley in 2012

Rick Bayless has always been a supporter of The Chopping Block and us equally so of his many successful endeavors. Shelley was a guest on his former podcast with Steve Dolinski in 2018, and Rick presented Shelley the Women's Chef and Restauranteurs Educator of the Year award in 2014.

Rick Bayless, Shelley Young and Karen Schiro at the WCR Awards Ceremony in 2014

Bill Kim is someone we definitely call a friend of The Chopping Block. Not only has the Chicago chef participated in multiple food shows in our kitchen, he brought his Korean BBQ cookbook to life in a class in 2018. Our employees were also treated to his food compliments of urbanbelly catering for one of our holiday parties one year, and Bill served it to us himself. That food was a definite standout to me of all of the employee parties I've attended over the years! 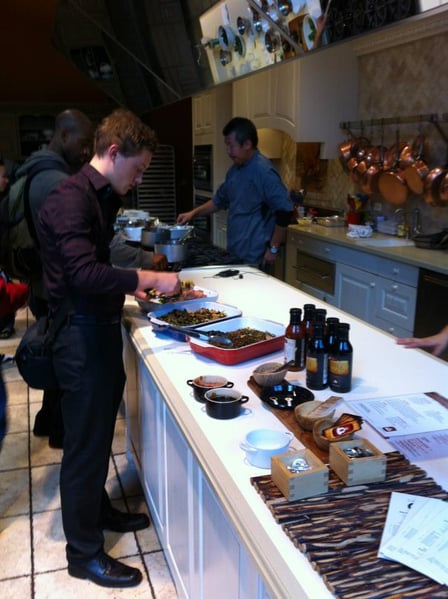 Chef Art Smith has also been a familiar face around The Chopping Block over the years. We have a long-standing relationship with his organization Common Threads, which reaches more than 30,000 children, parents and educators annually through its virtual and in-person cooking and nutrition education programs. He would often show up for fundraisers and even our Customer Appreciation Days! 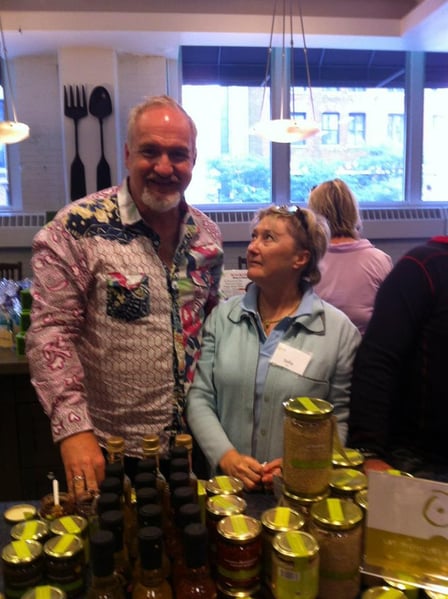 Greg Hall isn't a chef, but the former Goose Island brewer now with Virtue Cider has taught many classes about beer and cider at The Chopping Block. Here he was at our 5th anniversary celebration at Webster Ave. It was a 24-hour cooking class, and Greg was such a great sport to be a part of it! 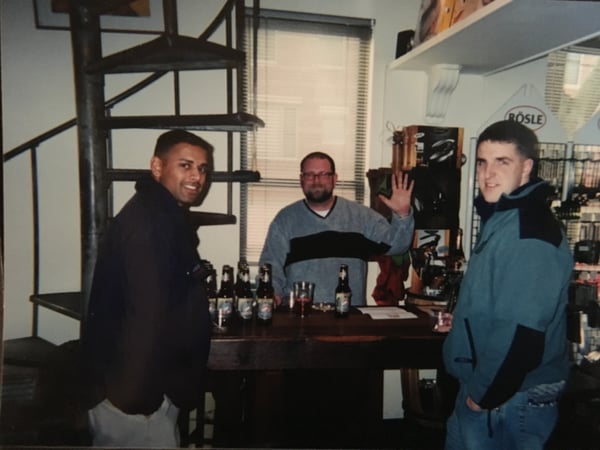 Greg Hall at Webster in 2002 for our 5th anniversary party

Chef Paul Kahan of One Off Hospitality Group fame also taught during that fifth anniversary 24-hour class marathon, but he's been back to our kitchens many other times over the years. 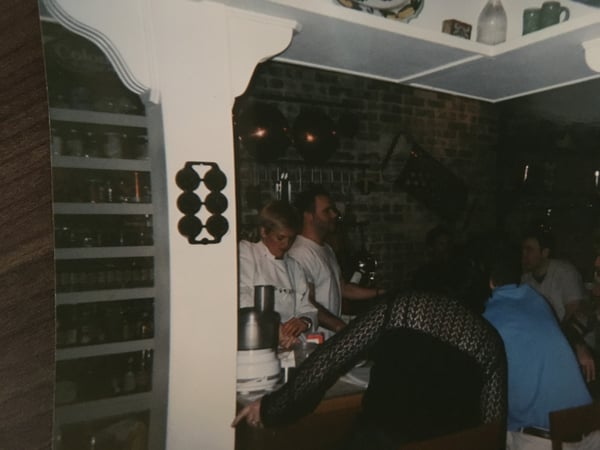 Here's a better shot of Paul teaching a class in 2017 at the Mart showcasing his Cheers to the Publican cookbook. 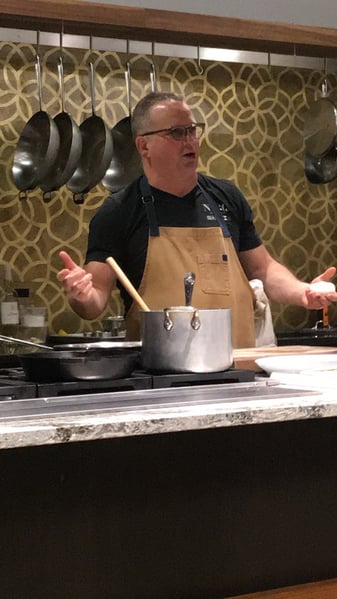 He was back in late 2019 to promote his Cooking for Good Times cookbook. This was one of our last book signing events before the pandemic hit! 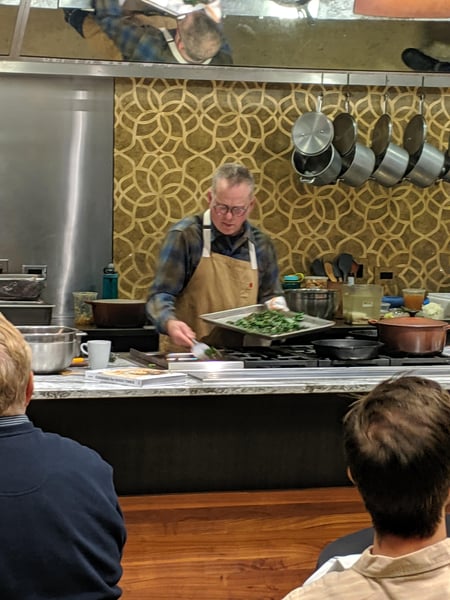 We've had many more Chicago chefs cook with us over the years. One event that especially stands out to me is a sold-out event celebrating the launch of the Green City Market cookbook in 2014 where Jason Hammel of Lula Cafe made Summer Bean Salad with Sun Gold Tomatoes, Market Herbs, Smoked Trout, and Goat Cheese Dressing, all using ingredients from local farmers. 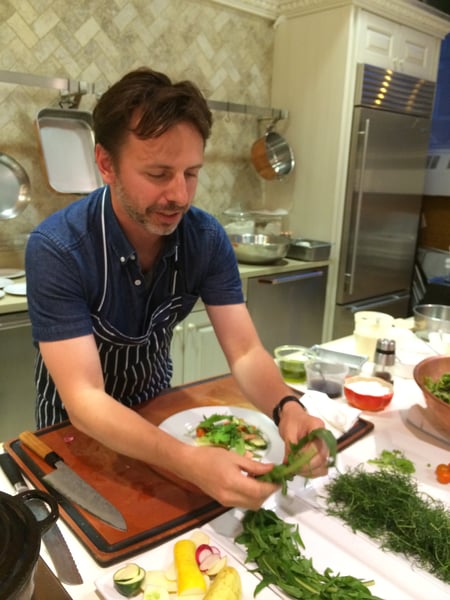 Chefs Joshua Kulp and Christine Cikowski from Honey Butter Fried Chicken also joined for this same event. They shared how to grind your meat and what cuts to use to achieve the best market hamburger ever. 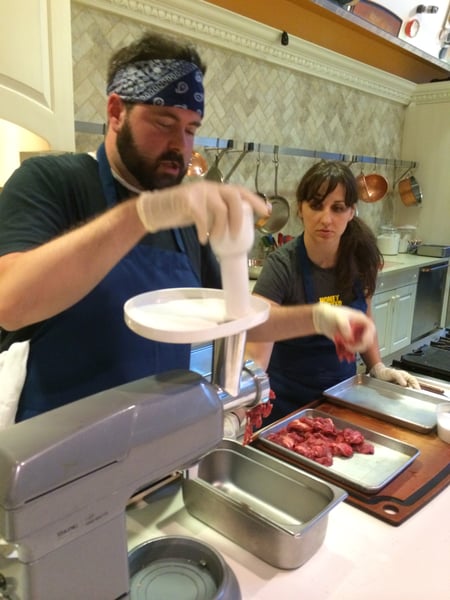 We welcomed other amazing chefs I could not locate photos from their events, such as Grant Achatz, Tyler Florence, Suzanne Goin, Ina Pinkney, Virginia Willis and Anne Willan, the founder of the École de Cuisine La Varenne, which operated in Paris and Burgundy France. There are simply too many other guest chefs who have cooked with us over the years to mention in this one article, but we appreciate you all for sharing your talents with us and our customers!

While it was a blast to meet all of these outstanding chefs, the chefs who have taught at The Chopping Block will be forever etched in my memories and a part of my cooking skills. There's too many who made an impact on me to list them all here, but many of them are still my very good friends to this day. Some have gone on to start their own businesses, from restaurants to other recreational cooking schools, while others have left the hospitality industry in search of other successful careers. One major benefit of working somewhere for 20 years is that you cross paths with so many different people, but you all share a common love of food and bringing that to others.

The Chopping Block's Owner/Chef Shelley Young brought this cast of characters together, and I'll be forever grateful to her for allowing me to play such a big part in a business that made a difference in so many peoples' lives.

You have one last chance to experience The Chopping Block at the Mart tomorrow, Saturday, April 30. We'll have free cooking demonstrations, food samples, wine tastings, free Le Creuset cookbooks while supplies last, and you can save up to 75% off retail merchandise. Stop by to pay homage to this momentous part of our history!

While there has always been a lot of cooking going on at the Mart, we had some other special events, too. We had hosted a group of Tibetan monks at Lincoln Square when we first opened that location, and they later joined us for a fundraiser at the Mart in 2011. They cooked, chanted and blessed the crowd. I thought this was a fitting way to end this post, with photos and video of the mesmerizing chanting. Here's to many more years of The Chopping Block at Lincoln Square! 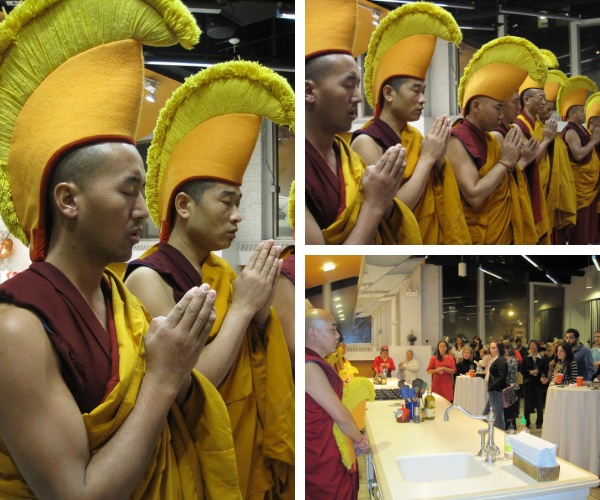