The Tale of Fettuccine Alfredo

Dim the lights. Gather in a circle. Put a flashlight under your chin. You are about to hear one of the scariest tales of blog writing ever to be told.

It was an ordinary fall day. The skies were overcast, a chill was in the air and the only sound I could hear was the rustling of the leaves outside. The conditions were perfect for a rich, delicious bowl of pasta.

I walked over to my pantry and let my thin wispy fingers entwine the cold metal handle. The door creaked as it opened. What was it that brushed my palm? (Insert screams of horror and flicker your lights.) I reached slowly into the depth of the long dark cabinet and I felt it…. the lone box of fettuccine!

All of a sudden, my entire body was covered in goose pimples. I felt doomed. This box has haunted me for months. I knew it was there. I could feel its presence. Petrified and yet feeling a bit of a thrill, I pulled the box out and knew what I had to do.

I couldn’t run because that never serves anyone in a scary story. I had to face my fear and attempt to battle a monster of a technique. You see, I have never perfected fettuccine alfredo…. or should I say I was “afraid”o. There is a finesse to making this sauce that has always been a mystery to me.

As I was preparing for this blog, it became more of a thriller because I had always thought alfredo was a cream based sauce…. but I was wrong. The ghost white cream sauce we all know and love is actually an American version that has evolved over the years. (Talk about a plot twist!)

Like any good campfire story, there are versions of the truth entwined with myth. My interpretation of the fables is that Fettucine al burro was a staple dish at a restaurant run by Alfredo di Lello. His fettucine was simply butter, Parmigiano-Reggiano cheese and the pasta.

The legends say that American movie stars were honeymooning in Italy during the 1920’s and “discovered” the dish. Next thing you know, it is everywhere in the United States but here is the scary part. Imported Italian cheese was not hugely available so chefs discovered that using cream could replicate the depth of flavors. (Insert more screaming if you are anti-cream.)

Super velvety alfredo sauce had evolved into the notion that possesses most of us. Time for a pasta exorcism! Good thing I became an ordained minister online because I think I can tackle this demon!

I poured over my library of cookbooks, magazines and online articles. Interestingly enough, none of my Italian cookbooks had fettuccine alfredo in them but my American household books did have the cream sauce version. Mysteriously my computer popped on (i.e. my dog was on my lap and hit the power button) and I came across a great recipe by Bon Appétit for a “true” Roman fettuccine alfredo. 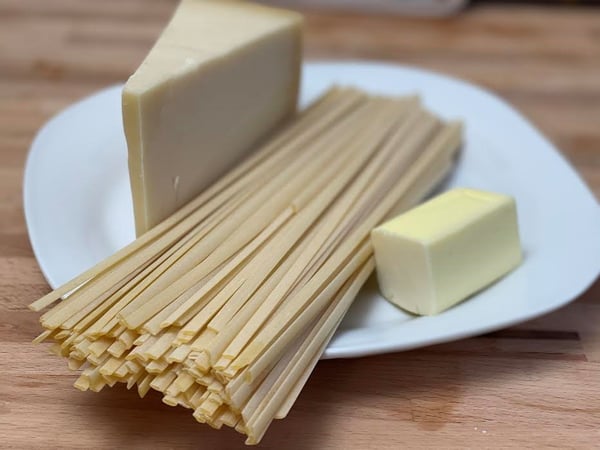 3/4 cup finely grated Parmesan cheese (Grate it yourself. I do wish there was a weight on the cheese because it would be more accurate. I used about 4 ounces.) 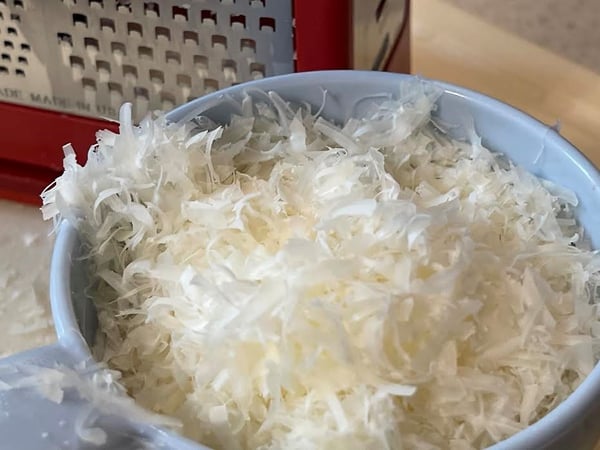 1. Cook pasta in salted water per package instructions. *You want it al dente because it will cook a little longer when you mix it with the sauce. Note: One hint I followed from a different recipe was to cook it in a smaller pot than normal for pasta with the intention of concentrating the starches in the pasta water since it will be used later in the sauce.

3. Reserve 2 cups of the pasta water before you drain the noodles fully. *I found ladling out the water from the pot was quite easy. 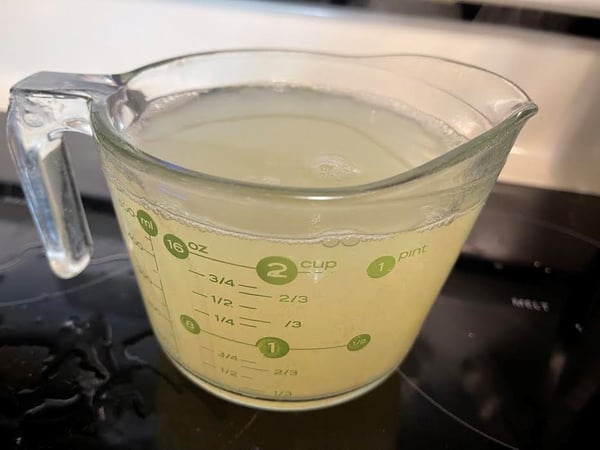 4. Transfer 1 cup of this cooking liquid to your pot. It should be at a super low simmer.

5. Over medium/low heat, whisk in one small piece of butter at a time. *I also found that using pieces that were smaller than a tablespoon allowed for the butter to emulsify better with the water. 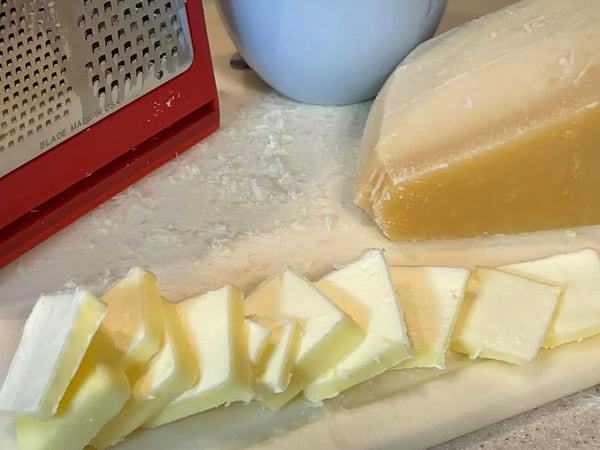 6. You don’t add more butter until the entire previous pat is whisked in. 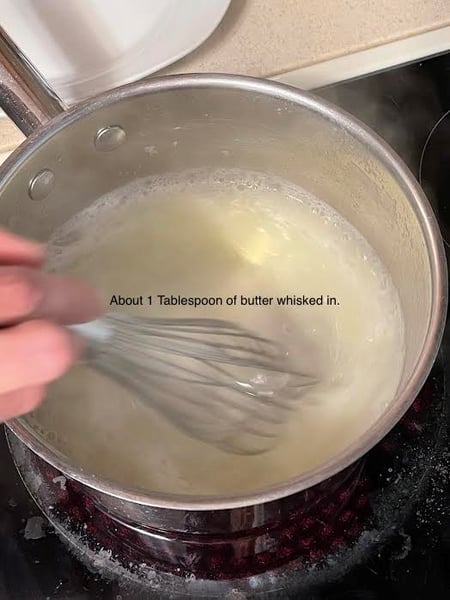 7. Start to add small handfuls of cheese. It should never get gloopy. The cheese should just melt gently and incorporate itself into the sauce. 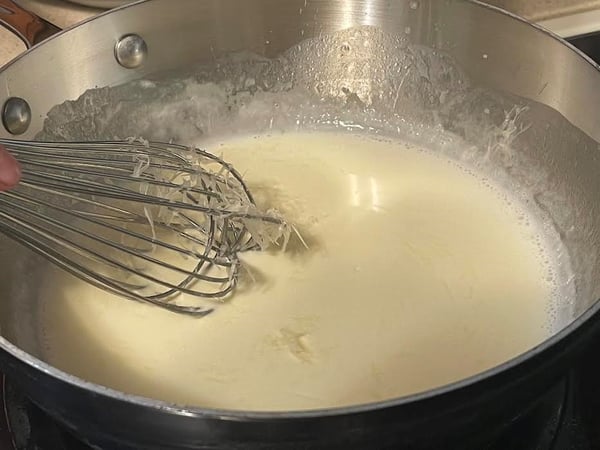 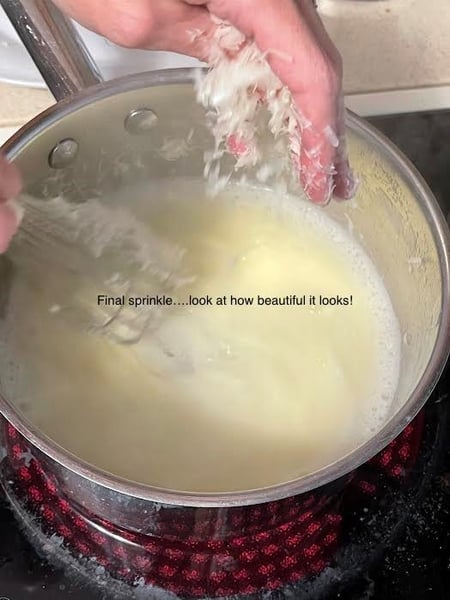 8. Finally, add your cooked fettucine and coat each noodle with the sauce. You may have to add a little extra pasta water to thin it out, but I didn’t. 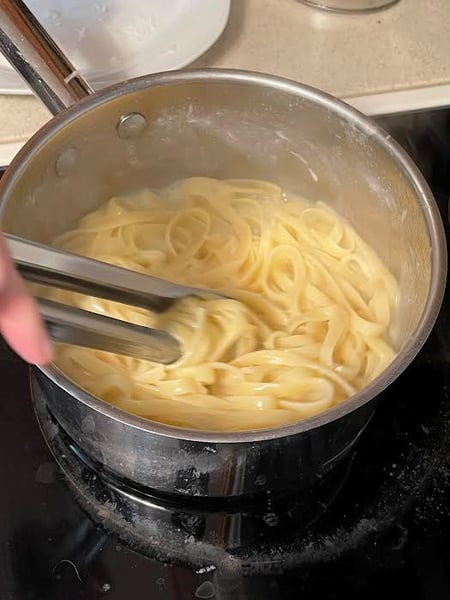 9. You may want some extra cheese and I always crack on an abundance of pepper. (And yes, I do realize that is a lot of pepper but remember I’m only an internet minister so my exorcism is far from perfect.) 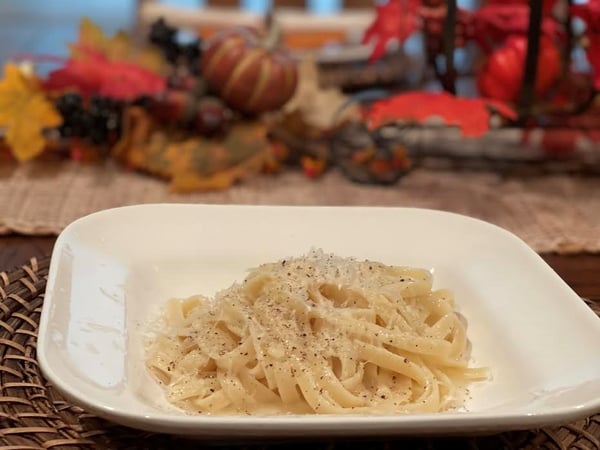 Like any scary story, it was really petrifying in my head. I was at first haunted by the thought of trying to make alfredo this way but it was actually incredibly easy to get the butter and water to emulsify together. The end result was an incredibly delicious bowl of pasta which felt lighter than the “norm.”

If you need to get some tools (grater, tongs, whisk, new pot) for your own pasta mystery adventure, Lincoln Square is open five days a week for retail shopping.

And if you are scared of the noodles in your pantry, learn to make your own in our Virtual Cook Along: Pasta Shape Workshop November 14 at 11am CST.