The World’s Most Delicious Snowflakes

While it is probably inadvisable to risk alienating large swaths of your audience in the opening paragraph, I’m going to admit something: I love winter. The cold weather lets me show off all my effortlessly cool cable knit sweaters, I can watch from behind a window—edges beset with glistening frost, steaming mug gripped languidly with both hands—as fat flakes of snow drift lazily to the earth, and the food is just super tasty. Honestly the food is one of the best parts about winter. There are rib sticking braises, hearty soups, baked treats of all manner, and we can eat as much as we want because, you know, its like… cold. One of my favorite cold weather treats are dumplings. Now, obviously I’ll eat dumplings any time of year, but they are especially satisfying when the mercury starts to drop, so when I learned about a Chinese preparation called snowflake dumplings my interest was mega-piqued. I mean a winter-themed dumpling? How could I resist? 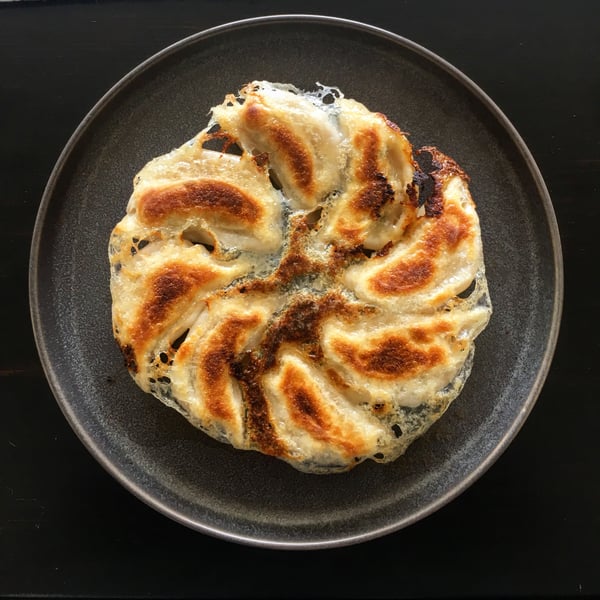 Snowflake dumplings are not, despite the name, tiny snowballs folded into a thin wrapper and steamed; they are typically a pent-or-hexagonal arrangement of whatever Chinese style of dumplings you happen to have on hand connected by a lacy network of crispy batter which, if you use your imagination, ends up looking kind of like a snowflake. While I do include a brief dumpling making walk through in this post, what I most want to focus on is the “snowflake” style cooking technique itself. If you’ve never done it before, I do encourage you to try making your own dumplings but you can totally take advantage of this style of dumpling cooking with dumplings you buy out of the freezer aisle in the Chinese grocery store. Simply pick up the instructions with the slurry-making instructions and follow from there.

The first step here is making wrappers. This process is actually easier than you might think. I made mine by adding two cups of flour, and a pinch of salt to my food processor, then turning it on and drizzling in boiling water (about a half a cup) until it started to come together into a dough. After that, I let it ride around in the processor for about one minute before taking out the dough ball, wrapping it in plastic, and letting it rest for 30 minutes. I use boiling water because it denatures some of the gluten proteins which gives us a softer, more pliable dough, which is perfect for rolling into wrappers.

While the dough was resting I made my filling. To do this I added:

to my food processor and turned it on to mince the ingredients. I then added:

and turned the processor back on to incorporate, and mince the pork a little more finely. While the processor was running I added:

I then turn out the filling into a bowl and added:

After I had my rested dough, and finished the filling, it's time to roll, fill and fold.

First I divided the dough into quarters, then rolled each quarter into a rod shape, and divided that into 16 even pieces. 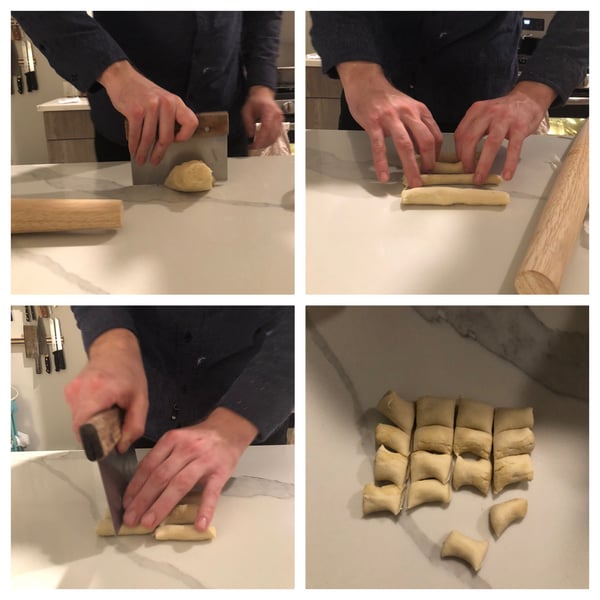 I then rolled each piece into a thin disc into which I placed about a tablespoon of filling, folded in half, and pleated with my fingertips to form the finished shape. 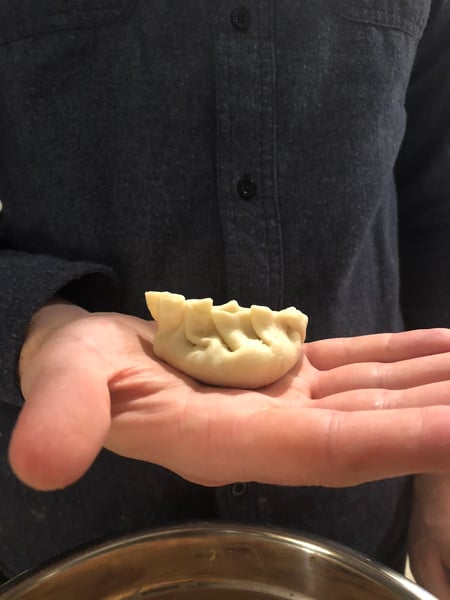 Repeat the process about 40 times.

In order to get the beautiful crispy webbing for which snowflake dumplings are so prized, you want to steam them not with water, but with a slurry. I mixed my slurry by combining in a bowl: 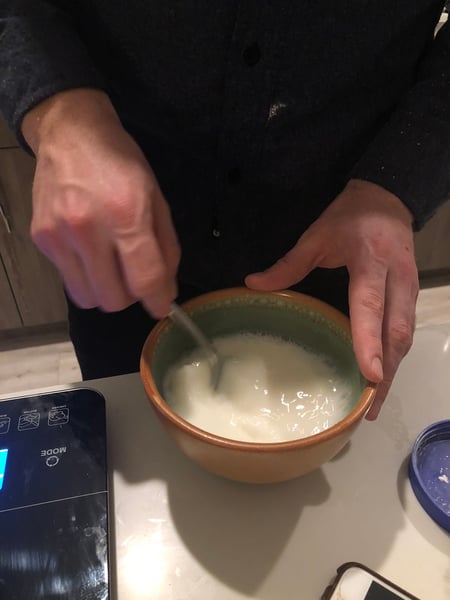 I chose the six least aesthetically-challenged dumplings, and arranged them in a nonstick pan with some oil to get a nice brown crust. Once they were nice and golden-brown I added about two tablespoons of slurry, reduced the heat to low, and placed a lid over the pan so they could steam for eight minutes: 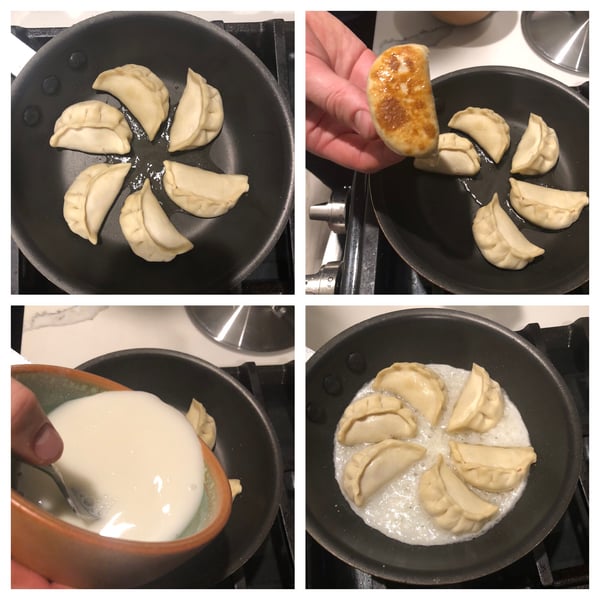 After eight minutes were up I took off the lid to let the water evaporate so the crust could crisp up: 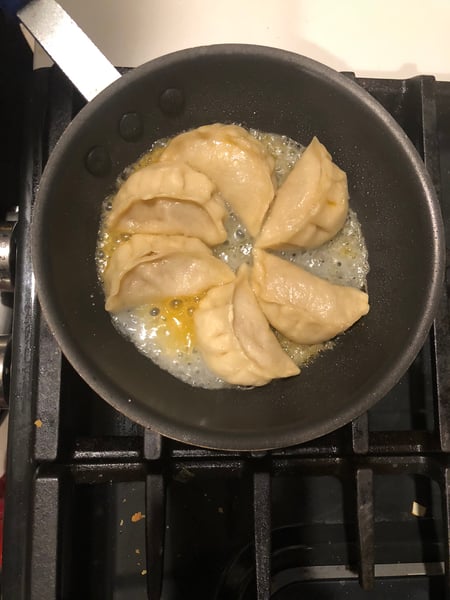 Once I could see that the batter had turned from milky/opaque to transparent/crispy I turn the heat off, made sure the dumplings were released from the pan, inverted a plate over the pan, and flipped the pan/plate over to turn out the dumplings while keeping their arrangement intact. 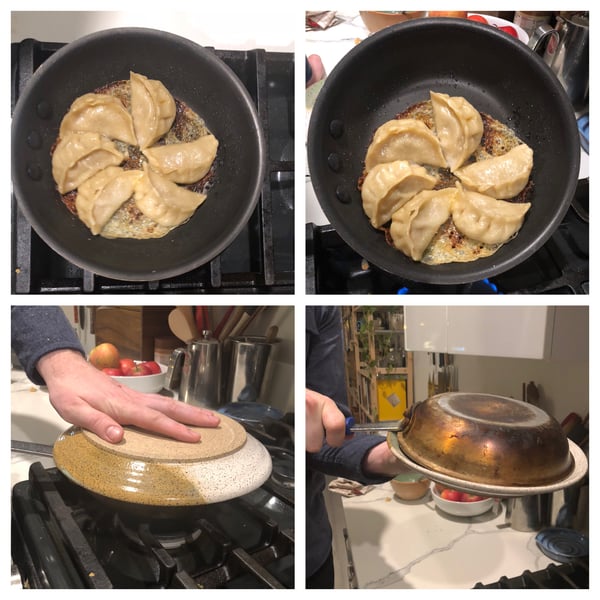 Let them cool for a few minutes, and enjoy! 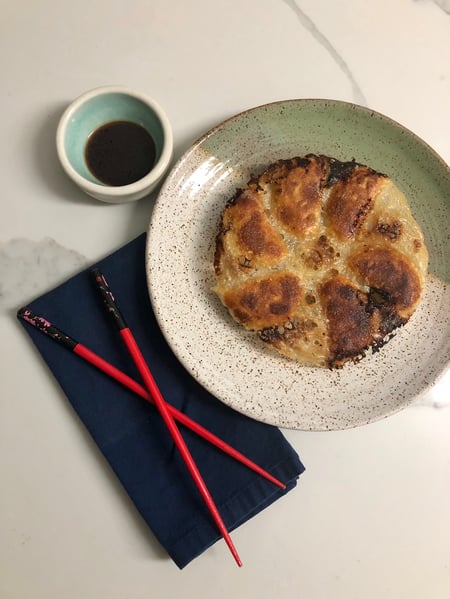 I know most people won't be persuaded to enjoy winter the same way I do, but I think most people are on my side when it comes to dumplings. One of the best things about making dumplings is that you can invite friends over to help you roll out and fold them; they bring people together even before they hit the pan. I know I said food is one of the best parts about winter, but another nice side-effect of the cold weather is that people are more inclined to stay inside and spend time with friends and family. This dish happily unites both.

If you love dumplings as much as I clearly do, I hope you’ll consider joining us at The Chopping Block for one of our upcoming Dumplings Around the World hands-on classes at Merchandise Mart or Lincoln Square. Until then, help those close to you get a head start on all that holiday weight gain by feeding them these wonderful crispy treats.