I’m generally not a fan of cold weather. It’s uncomfortable and managing the layers of clothing is a nuisance.  However, I have four decades of successfully coping with Midwest winter, and I’m not backing down. Forefront in my arsenal to combat the winter months are soups - that enormously diverse family. Nothing is more effective at cutting through the chill than a steaming, rich broth. In the cold season, a bowl could be the start of any meal, or the meal itself. You could have a different soup every day of the month, there is such variety.

Being comfortable with making the more expedient soups can be a saving grace in your busy life. They can take minutes of labor so, in a pinch, you’ll have a pot on the dinner table without setting aside half a day for it. Additionally, a soup can be incredibly effective at clearing through excess fresh fridge ingredients or utilizing spare cupboard commodities. In the past couple of weeks, I’ve made three soups for my family. They each required no more than 15 minutes of hands-on labor. They also, not coincidentally, were all purees. Making a puree reduces the need for precision cuts, unifies the soup seasoning with less fuss than a chunky chowder, creates a rich creamy texture without high calorie ingredients and, if you’re serving a fussy eater, hides unusual ingredients.

The first soup I made was butternut squash. I cut the squash open, rubbed it with some oil, and baked it at 425 degrees for about 45 minutes. You’ll see I diced my squash, but you can just cut the whole thing in half and leave the skin on; you’ll remove it later. To determine doneness of the squash, I want to see some browning, showing that the sugars are caramelizing. This is the alchemy that will elevate our soup. You can’t get that if you boil the squash—the sugars won’t reach a high enough temperature. At this point the squash should be easily smashed with the back of a spoon.

Put the squash flesh into a pot, leaving skins behind. I added some curry powder, cayenne, salt, a cut up apple (because I have many apples), and some vegetable stock, which I happened to have. I simmered this for 15 minutes, added a can of coconut milk and some apple cider vinegar, and used an immersion blender to puree. A countertop blender (Vitamix, especially) does a better, more thorough job to get the soup immaculately smooth (like pudding!), but you will typically need to work the soup through in batches. If your soup is hot, fill the blender to less than halfway, because the steam will create a burst that is dangerous! So if I’m content with a little texture to my soup, I’ll stick to the immersion blender for ease of use and cleaning. Check for seasoning and gosh, that is it! Garnish with some sliced scallions or whatever your imagination brings.

My second soup was mushroom. I roughly chopped half a pound of mushrooms. I used some beautiful oyster mushrooms, which were grown by Josh, a Chef Instructor at The Chopping Block. 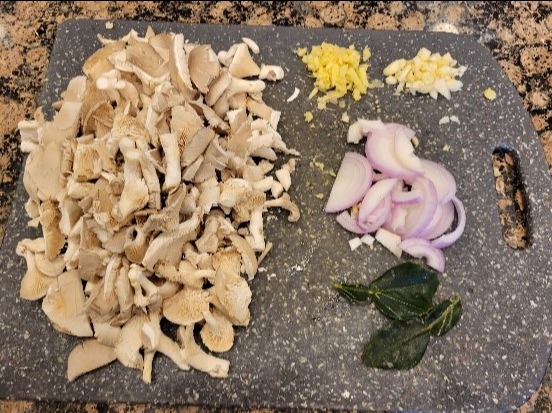 I sautéed them in some oil with shallots, ginger and garlic, added water and a kaffir lime leaf (which I happened to have in the freezer), some apple (because again, I have a bunch) and a couple of tablespoons of soy sauce and let that simmer for 15 minutes. Then I used my immersion blender again and found that the texture was very creamy. This could have been finished at this point, but I added a half cup of cream because I had it and wanted it out of my fridge. I served it with hot sauce and again, some thinly sliced scallions. 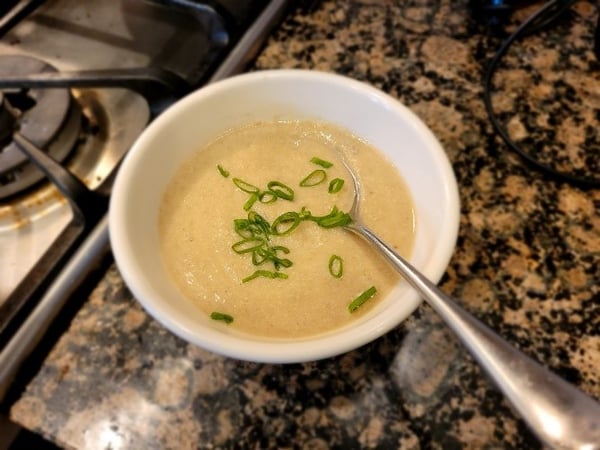 My third soup was black bean. This time I sautéed onion and garlic, bell pepper, tomato and tomatillo.

Next I added two cans of black beans and, at the brilliant suggestion of my teenager, some dried ancho pepper, of which I have a lot in my cupboard. Said teenager somehow also did this at that moment, by throwing a playing card. 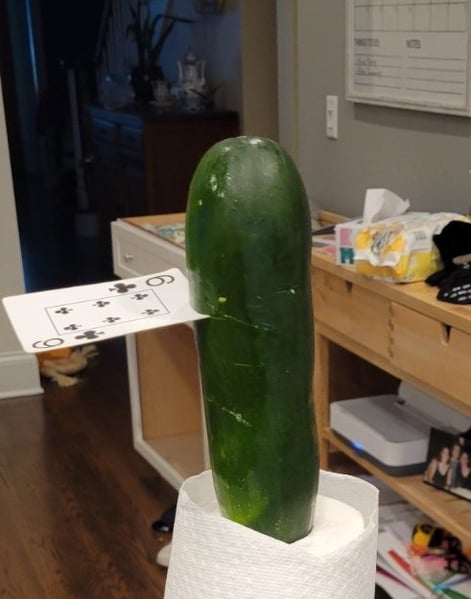 Again I simmered for 15 minutes, added some water and pureed. Check for seasoning and serve optionally with sour cream and crumbled tortilla chips. 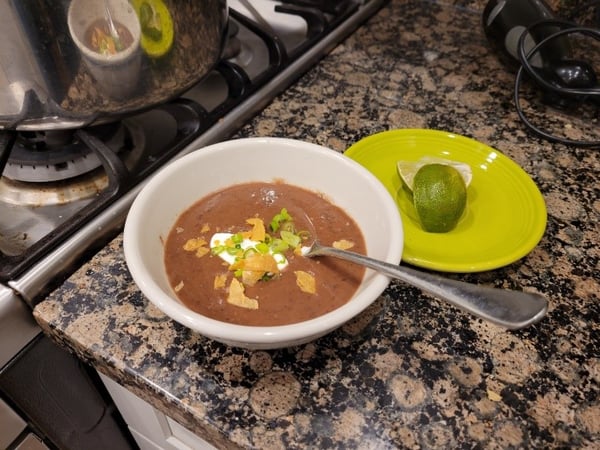 As you’re learning, you’ll want to start your soup with less liquid, and then add liquid after you puree your ingredients. Over-estimating the liquid to solid ratio is common. Finding yourself with a flavorless, thin porridge will have you scrambling to find more ingredients to thicken it back up, but adding more liquid (water is usually fine in a pinch) is a snap. I suggest starting with enough liquid to just barely cover your solids. After blending add liquid to taste; I generally like my soup to not be so thick that it mounds on top of itself.

The Chopping Block offers an Essential Building Blocks class which guides home cooks through a bisque (as well as a wealth of other kitchen basics). Join us this Saturday, November 13 at 9am at Lincoln Square. You'll make:

All of those fresh vegetables in your fridge are waiting for a home. Cook them up quick, puree them, season and bowl ‘em up. It will get you through to the thaw.