A Farewell to the Sweet Corn of Summer

I love reading recipes. I’ve researched and downloaded so many of them that I’ll never be able to cook even half of them. But the fun and enjoyment for me has always been the process of researching them.

There was a time when you couldn’t pry me out of a bookstore before purchasing at least one cookbook, which is evident by the number of cookbooks that dominate the bookshelves in my home. But in today's digital age, all you have to do is type in a single ingredient into any search engine and you end up with a display of several recipes at your disposal, all geared toward that one ingredient you inquired about.

On our recent vacation in Mexico, there were days when there would be rain storms that would last for several hours. During those downpours, I would pull out my phone and scan the numerous emails with recipes that fill my inbox. Lately I’ve been drawn to recipes featuring desserts or recipes where pasta is the main course. I’m also always researching lasagna recipes, trying to land on the one that I can finally perfect. For some reason, I’m not the best with making lasagna. I use to be that way with pie dough but I am so grateful that I finally conquered that fear. Lasagna is next!

After returning home from vacation, I decided that the first homemade meal I was going to prepare was going to feature pasta. One of the recipes that I looked at in Mexico and that I couldn’t get out of my mind was a pasta dish that featured fresh sweet corn. I was looking forward to getting back home to tweak the recipe and make it my own.

This recipe has now become my new favorite summer dish. It contains a few vegetables that are very reminiscent of the months of summer: fresh tomatoes, sweet corn and asparagus. But what really ties the entire recipe together is the pasta water that is infused with the left-over corn cobs that would normally be discarded after grating and removing the kernels from the husked corn. Instead the leftover cobs are added to a minimal amount of boiling water which is transformed into a sweet, almost creamy like liquid gold. The water also happens to become the base for the pasta sauce.

I recently made this incredible pasta dish for a few friends we had over for dinner the other night. The consistency of the sauce is so rich and creamy that one of the friends was totally taken aback after I revealed to him that the sauce contained absolutely no cream at all.

One of the other things I really like about this recipe is the addition of a bit of heat in the form of habanero chili. Don’t be afraid of the habanero in this dish. With the creaminess and sweetness of the fresh corn and the fruitiness of the tomatoes, asparagus and fresh basil, the addition of the habanero chili gives the dish an extra zip and just rounds out the pasta and complimenting it perfectly.

The recipe also calls for short pasta shapes, such as campanelle, penne rigate, fusilli or farfalle. Those are the shapes that are best at catching and helping the sauce cling to the pasta.

1 pint of grape or cherry tomatoes, sliced in half

4 tablespoons (½ stick) of butter, cut into 4 pieces and divided

1 habanero chili, stemmed, seeded and minced, (make sure to wash your hands with soap and water after mincing the habanero and avoid touching or rubbing your eyes).

10 spears of asparagus, on the bias, cut into three pieces, blanched and shocked

12 ounces of campanelle or other short pasta

½ teaspoon of kosher salt for the tomatoes

1 tablespoon of kosher salt for the infused pasta water 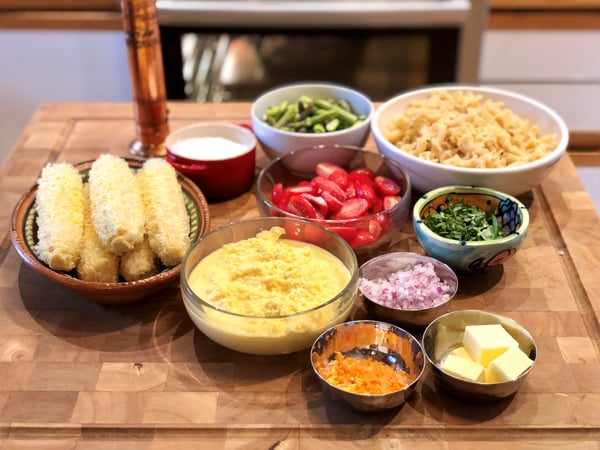 1. In a small bowl, stir together the tomatoes and ½ teaspoon salt and set aside. Set a box grater in a large bowl or pie plate. Using the grater’s large holes, grate the corn down to the cobs; reserve the leftover corn cobs.

2. In a large pot, add the tablespoon of salt and bring water to a boil. Fill a large bowl with ice and cold water for shocking the asparagus. When water comes to a boil add the asparagus spears and cook for 2 minutes. With a large slotted spoon or strainer, remove the now blanched asparagus and add to the ice water, to shock the asparagus and stop the asparagus from cooking, retaining its bright green color, drain and place aside in a small bowl for later use. Add the leftover corn cobs to the boiling water, reduce heat to medium and cook, covered, for 10 minutes. Using tongs, remove and discard the leftover cobs, then remove the pot from the heat, and reserve 1 ½ cups of the water. 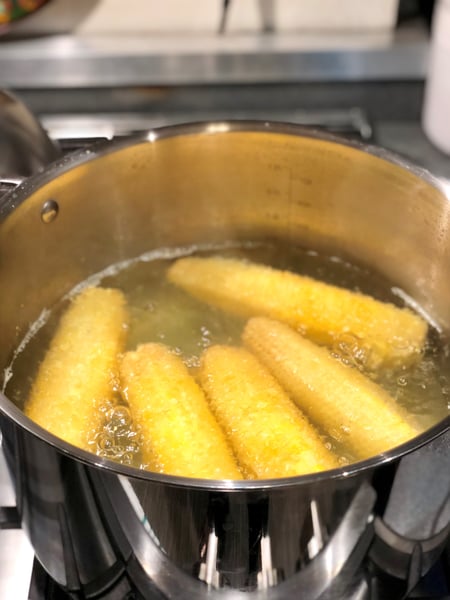 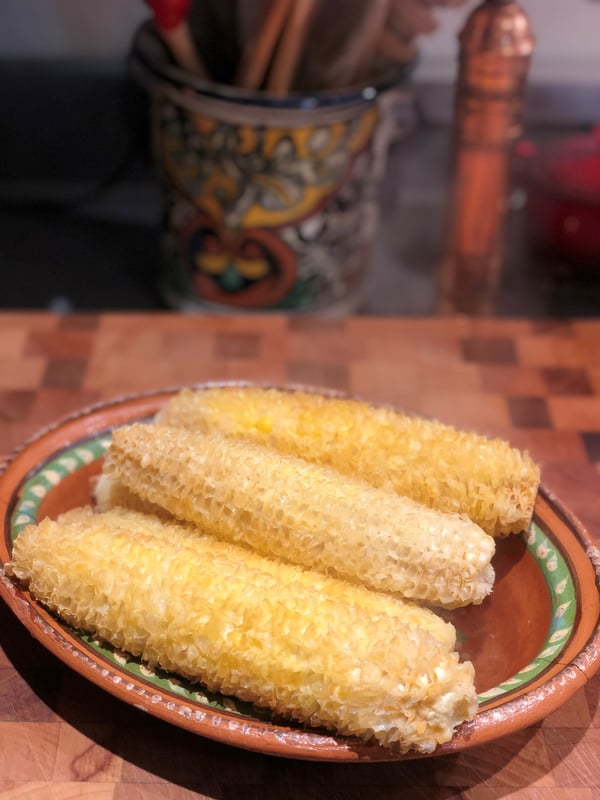 3. In a large nonstick skillet over medium heat, melt 2 tablespoons of butter. Add the minced shallots and habanero chili and 1 teaspoon of salt. Stir and cook until the shallots have softened, about 4 minutes. Add the grated corn to the skillet and cook for 2 minutes, stirring in the 1 ½ cups of reserved cooking water. Cook over medium-low heat uncovered for between 10 to 15 minutes stirring occasionally, until the mixture slightly thickens (a spatula should leave a brief trail when drawn through the mixture). 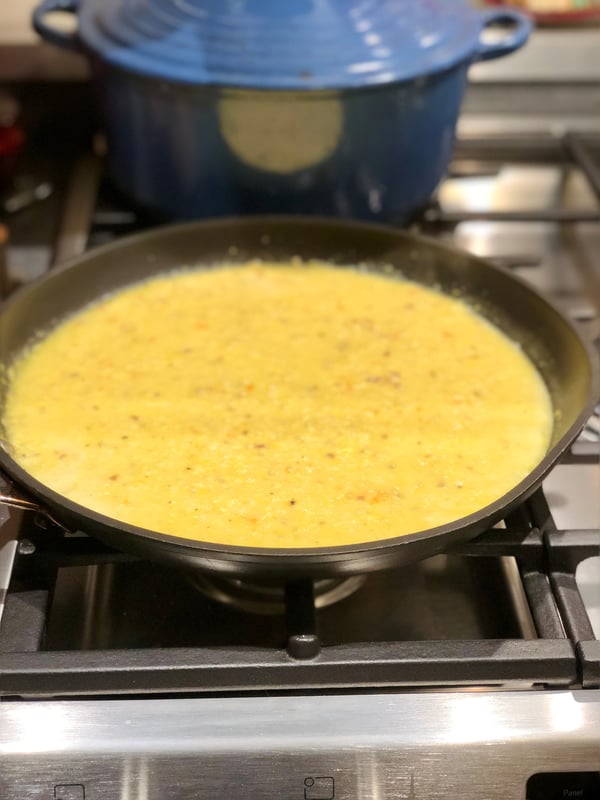 4. Meanwhile return the remaining corn-infused water to a boil. After the water comes to a boil, add the pasta and cook stirring occasionally, until the pasta is al dente, (follow the package instructions on the pasta for cooking times). Reserve 1 cup of the cooking water, then drain the pasta. Add the pasta and ½ cup of the cooking water to the skillet and cook over medium heat, stirring constantly, until the pasta is coated and the sauce is creamy, about 2 minutes. If the sauce turns out to be too thick, add the other half cup of the infused pasta water, 2 tablespoons at a time, until you reach a proper consistency.

5. Turn off the heat, add the remaining 2 tablespoons of butter, asparagus, tomatoes with their juices and the chopped fresh basil to the skillet. Toss or stir until the butter has melted. Season to taste with salt and pepper.  If sauce begins to thicken after stirring, add another tablespoon or two of the pasta-water.

6. Spoon pasta onto a plate or large bowl, add grated Parmesan cheese, and if you like, a drizzle of extra virgin olive oil and a couple of grinds of freshly ground black pepper. Now sit back and enjoy the fresh taste of summer’s last hurrah on a plate. 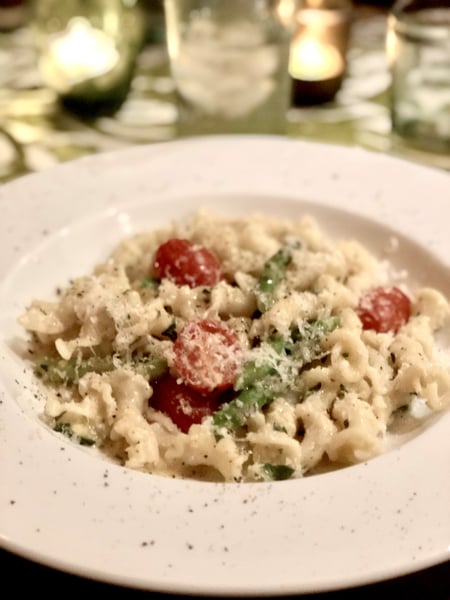 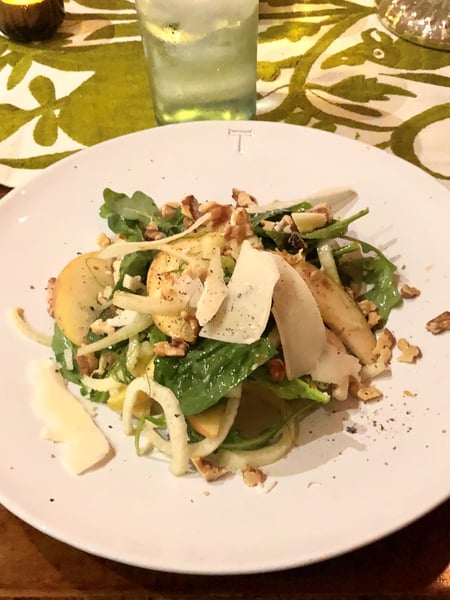 This dish would also be great with homemade pasta. Learn how to make it in The Chopping Block's hands-on Pasta Workshop classes being offered on:

If you want to learn how to utilize fresh ingredients now that it's fall, don't miss our last Farmers Market Tour and Cooking Class on Thursday, October 18 at 6pm. You'll tour the Lincoln Square Farmers Market with our chef and then enjoy an impromptu cooking class utilizing what you find at the market that evening.