I will be honest. I had never actually heard of Labneh prior to my cheese making classes at the Ploughshare Institute in Waco, Texas. I was not only intrigued about the cheese making process but also excited to taste it.

Labneh is a traditional Middle Eastern cheese, originally made from goat’s milk. However, today Labneh is more commonly made with cow’s milk. The recipe below preserves and seasons the Labneh by storing it in olive oil and adding herbs and garlic for seasoning. You can make the same recipe but omit the oil and seasonings (except for the salt) and use it like cream cheese… think of it as a tangier lower fat version of cream cheese. Spread it on a bagel, serve with a warm pita, and use it as yummy filling to stuff a chicken breast or as a base for your dips!

You can make this recipe with either your own homemade yogurt (here's the recipe) or you can use store-bought yogurt. That makes this cheese recipe pretty approachable and also inexpensive.

2 sprigs of Rosemary per jar

Place the yogurt into the butter muslin as we did when making cream cheese. Make sure to have a big enough piece of muslin that you can wrap the 4 corners and tie them. 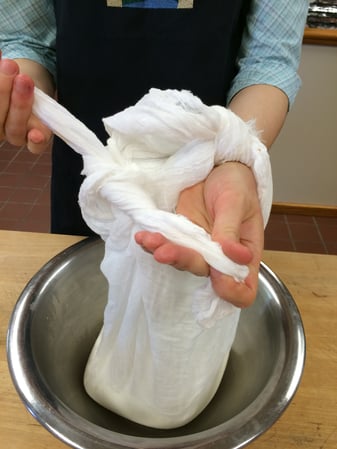 Then hang the yogurt over a bowl letting it drain for up to 6 hours. You can hang it over your faucet and let it drip right into the sink too, but you won’t be able to use the sink for 6 hours. 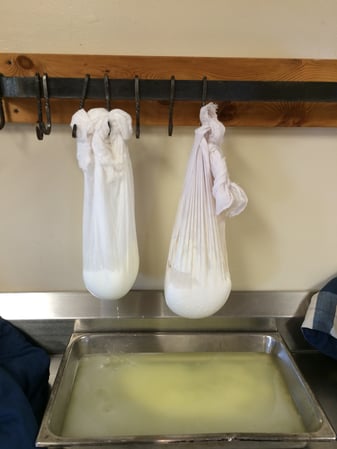 Remove the cheese from the butter muslin and place into a mixing bowl, add the parsley, salt and garlic and mix thoroughly. Take a small ice cream scoop and scoop little balls into a pint size mason jar. 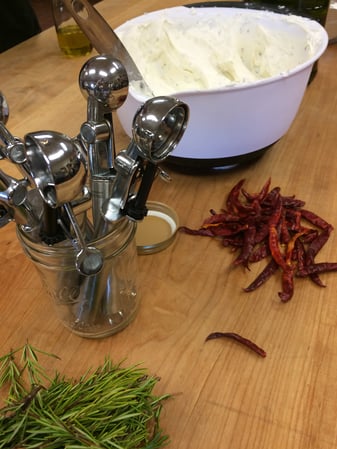 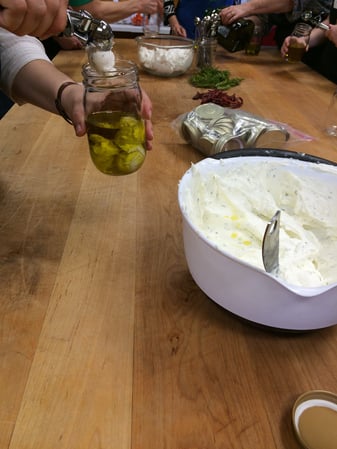 Refrigerate the cheese and it will be ready in about a week. This cheese will last in the refigerator at least a month. 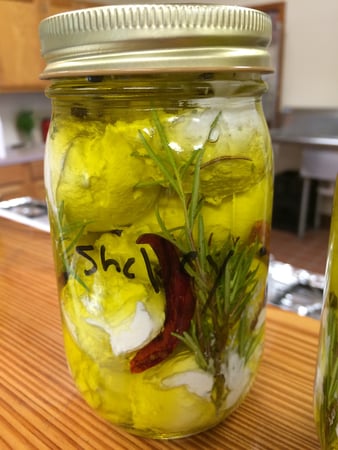 As I mentioned earlier, you can leave all the seasonings out, except the salt and use this like cream cheese, but you can also season this cheese with any herbs and spices you like. Check out The Chopping Block's Flavor Dynamics or our Culinary Boot Camp classes for some serious lessons on how to master the art of seasonings.

I'll be back soon with the next installment in this series… Goat Cheese!