When you hear the word “cooking” what comes to mind first? Is it the clicking of the stovetop as you turn on the flame? The smoky smell of the grill as you hear the sizzle of the food touch the grates? Or is it the thought of the mess you’re about to make while cracking an egg on the counter and dripping egg white all over the place?

If you answered yes to any of these questions or have another image for cooking, you are correct. But this post will cover something you probably didn’t think of when you first say the word “cooking”. At least I certainly didn’t, not for a long time. What I’m talking about is called cold cooking, a combination of two words that most would think shouldn’t go together.

Below we will explore the wonders of a cooking technique that you may have used before but didn’t know why or how it worked - a technique that has been used for thousands of years to our benefit to produce flavors and textures we struggle to achieve using other methods. By going through a simple ceviche recipe, we can understand how, why, and when we should use these techniques to achieve food that will inspire and wow those eating it.

If you read my previous blog posts about Koji, then you’ll have some familiarity with the use of fermentation and curing as a cold cooking technique. Though the recipe we will focus on today does not involve fermentation, it does include curing as well as chemical cold cooking.

Cold cooking, though it sounds like it shouldn’t work, functions the same as traditional cooking. The only difference is that we are removing the aspect of heat from the recipe. No heat?! You’re not cooking then, right? Wrong. In its truest sense, cooking is the act of preparing food for eating. This means as long as we are processing the ingredient to make it more palatable, then we are cooking the food. This can be achieved through many different methods such as:

As stated above, the two cold cooking techniques we will focus on for the recipe at hand (which is ceviche) will be curing and chemical cooking. Now one of those two techniques doesn’t sound all that healthy and safe, but rest assured it’s more familiar to you than you think. As we go through the recipe, we’ll cover where these techniques are used and how they help to transform the fish from a potentially hazardous product to eat, into something that is safe and delicious.

First, let’s start with the ingredients. Ceviche comes in many different forms and can be found all over the world, but is thought to have originated in Peru. Depending on where you are in the world, you will find variations of the classic recipe which always includes four ingredients: lime juice, salt, chili, and fish (or seafood). Beyond these four ingredients is where every culture has adapted ceviche and made it their own. Utilizing fish that is local to their area, spices that they are accustomed to in their cuisine, or cutting the fish in traditional ways. It all varies but at its core, if the dish has those four ingredients, you are good to go.

In my version, I chose to spruce it up a bit by adding corn, green onions, orange juice, tomatoes, and avocado before serving it on a cucumber slice. Definitely not needed, but I wanted to add some extra color since I was going more for a passed app feel with mine. It’s also common to find cilantro and red onions in many ceviche recipes given these are common Peruvian ingredients. 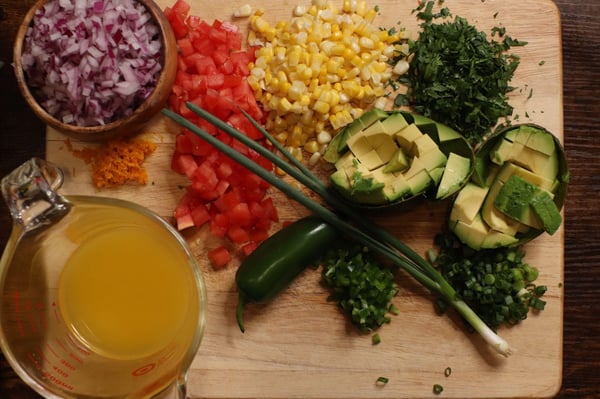 For fish, I opted for halibut cheeks from my local fish market. I went for this due to it being in season currently with only a few weeks left before I couldn’t get it anymore. I would recommend getting the freshest fish you can find and lean more toward white fish for this.

You can make it with dark fish (non-traditional) but for my use, white fish worked best. For most people who are seasoning/flavoring the ceviche with softer ingredients, then white fish is the best choice to balance the flavor. As well, any cut of fish works fine as long as you can cut it into cubes or slice it thin.

Now that we have all our ingredients prepped, we can get into assembling the dish and talking about how curing and chemical cooking play a role here.

Through curing we are commonly looking to have salt pull water out of the exterior of the product while it ages. This inhibits the growth of bacteria as they don’t have access to water to grow. There is water inside the fish, but there is no oxygen so again, the bacteria can’t grow as they need both of these to thrive.

The technique of curing we are using here is similar to what we see in sushi preparation: very quick cures that are intended to only touch the surface and add a hint of flavor at the same time. With the product typically very thin, it doesn’t take much to pull the surface moisture from it. And though this inherently doesn’t make it safe to eat cause it is such a quick process in, it does allow for other ingredients to enter into the surface of the dry product easier. This is where our next cold cooking technique comes into play.

Chemical is just a reference to the process that is occurring to the product. In this case, we are using acid to denature (breakdown/change) the protein of the fish. The result of the acid entering the surface of the product and affecting the proteins is a chemical reaction on the molecular level. This happens just about everything you add acid to food, heat food up, or even season food. The resulting effect of this process is a product that is unable to harbor bacteria (meaning it’s safe to eat) and also a product that is slightly more firm (has bite to it).

This technique only takes around five minutes to take effect but is something that should only be used around the time when you are consuming the product (within an hour or two). The longer it sits in the acid, the more it will break down and eventually become slimy and chewy. 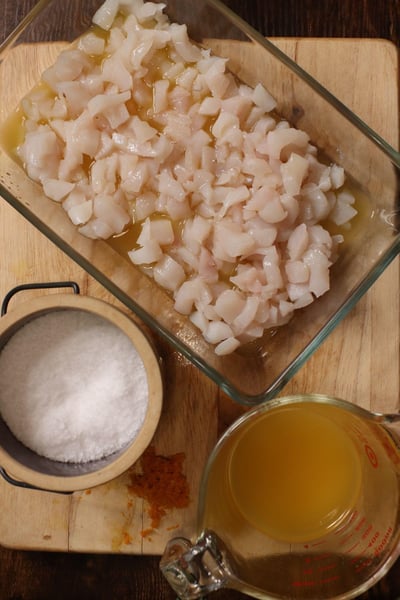 When doing this for ceviche, I recommend draining off the acid after the initial cooking is done and adding new acid as the first batch will become slightly watery/murky due to the release of water from the fish.

With a fresh batch of acid on our fish, we can finish the dish with all our inclusions and plate it up. 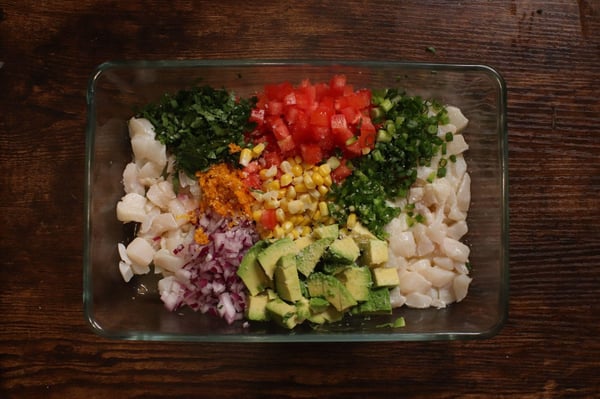 You can serve this as is in a bowl, with a side of chips, on cucumbers like me, spread on some toast, be creative! Keep in mind though, don’t make too much because it’s only good for that day, possibly the following morning but no longer than that. 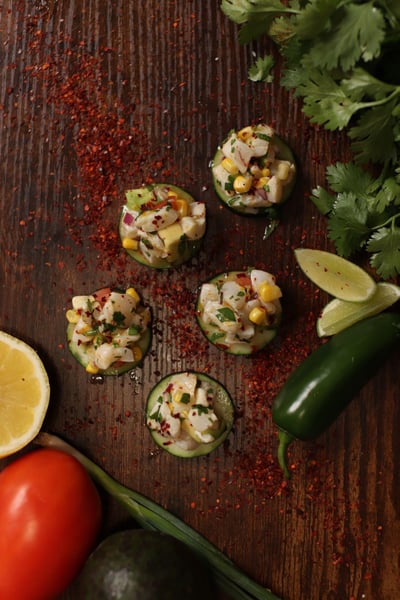 If you are interested in learning more about working with raw fish, check out one of our upcoming Sushi Workshop classes. Alternatively, look into our Night in Spain class that will show you unique ways to cook with seafood and use many Spanish ingredients that are commonplace in Peruvian dishes. The Spanish have their own twist on ceviche; they use shrimp instead of fish!