Intelligent Imbibing: How to Drink with Weight Loss in Mind

Managing alcohol intake with a fat loss goal is often looked at as an all or nothing decision, but it doesn't have to be. At the end of the day, all that needs to occur for fat loss to happen is to be in a caloric deficit. If you are consuming about 70-80% of your diet from nutrient dense foods and still maintain that deficit, there’s no reason to not responsibly consume alcohol if you enjoy it. 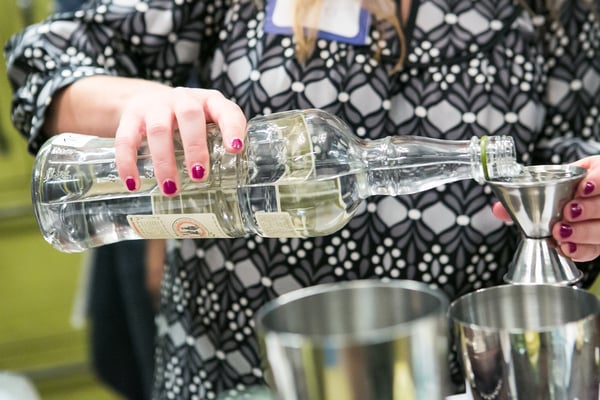 The biggest issue with alcohol is that it is relatively calorically dense, clocking in at 7 calories per gram (compared to 4 for protein and carbs but less than fat at 9). It's also often mixed with other things that are high in sugar like drink mixes, triple sec, fruit juice or even just pure sugar. That being said, it is not physically possible for your body to store alcohol so it must be immediately metabolized, which is why you feel the effects of alcohol very shortly after consuming it. You cannot get fat from alcohol alone, but when you consume other foods, your fat and carb metabolic processes slow down so that the body can focus on the booze. Since all that really matters is the caloric content of your drinks, here are some tips on which types of alcohol to choose and what to avoid.

My clients always ask me what's the best type of alcohol to consume and my answer is always the same: straight liquor or liquor combined with zero calorie mixers. One ounce of 80 proof liquor is about 64 calories across the board for all varieties of straight liquor of that proof. Obviously you can buy flavored vodkas or whiskeys now, so those calorie counts may vary due to sugar being added (usually in conjunction with the ABV being lowered slightly), but if it's just regular 80 proof, a 1.5 ounce shot is right around 100 calories. That's not really too bad when you think about it!

Where trouble occurs is when that shot is mixed with soda or fruit juice, then the drink can easily skyrocket into the several hundreds of calories. So your best option is generally either just drink it straight, mix it with diet soda, club soda, or any of the numerous other zero calorie mixers like La Croix, ice, etc.

Cocktails are often okay too, it really just depends on what else is in the drink. An Old Fashioned cocktail is generally just bitters, muddled orange and cherry, and a bit of sugar, which might only add about 30-40 calories to the whiskey, but anything mixed with triple sec (like a Margarita) is automatically going to add a whopping 188 calories per 1.5 ounce shot!

If you are a beer drinker, you’re going to have a far wider range of calories per serving depending on what you like to drink. Beers can range from 64 calories (Miller 64) to Lagunitas Little Sumpin’ Sumpin’ with 250, all the way up to many Imperial Stouts with well into the 300s for a 12 oz serving. Light beer will generally have the least calories, lagers and pilsners next, then ales and IPAs, and finally stouts and porters being the most calorically dense.

The biggest reason for the difference in calories is simply the amount of alcohol in the many different styles of beer. More alcohol means more calories, and with the heavier stouts and IPAs there are a lot more ingredients used which also jack up the carb content of the beer. An easy way to pick tasty craft beers that are relatively low in calories is to choose “session” beers, which indicate that the alcohol content is between 3% and 5% ABV.  On the flip side, anything labeled “imperial” indicates that the beer will be very bold with a ton of flavor and alcohol so these will usually fall into the 8-12% ABV range. These would be best enjoyed in very small quantities, whereas you could throw back several light beers or session beers and not rack up a huge calorie count.

As for wine and champagne, there are a few general consistencies across styles. White wine usually has less calories than red, averaging about 130 calories per 6 ounces compared to closer to 170 for reds. Compared to beer, wine is usually far more calorically dense, however since wine is usually enjoyed in smaller servings than beer, it is somewhat comparable on a per serving basis. Outside of the ABV of the wine dictating part of the caloric content, the sweeter the wine the higher the calories, and the drier the wine the less calories. Champagne is usually on the lower end since it is white and generally dry, where as dessert wines tend to be incredibly high in calories as they often have a much higher alcohol content and even more sugar in them.

Now that you’ve got a good idea on how to pick your adult beverages to best fit into your diet strategy, here are a couple low calorie cocktails that are packed with flavor. I love Margaritas but I don't like consuming hundreds of calories in just one of them, so my girlfriend came up with a low calorie alternative using agave nectar instead of triple sec. Agave nectar is a lot sweeter than sugar so you don't need to use as much. If you like stevia, truvia, etc, these are also great options for making drinks as they are very sweet and contain very few calories.

*Shake vigorously with ice and pour over ice in a salted rim glass. Garnish with lime.

When I first had this drink, I couldn't believe how good it was! It's much better than a traditional margarita. 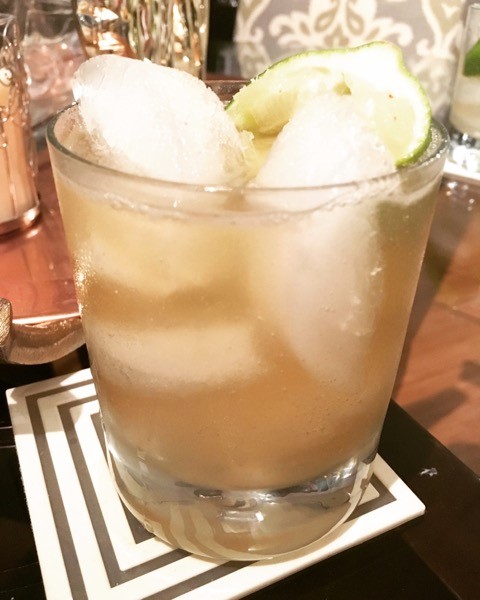 Dash of bitters (we used peach for this variety)

Approximately 140 calories (more if a higher ABV bourbon is used) 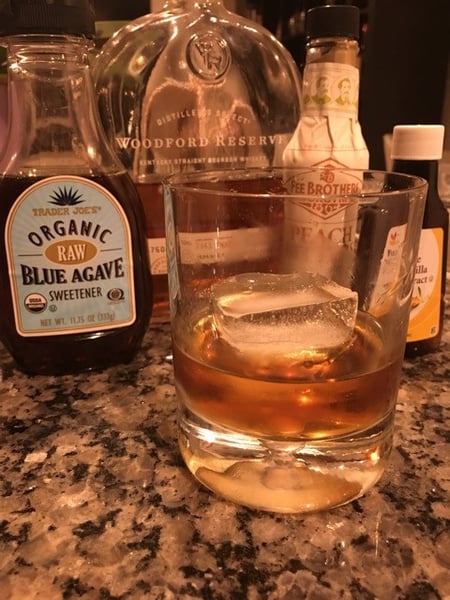 As you now know, an Old Fashioned is generally a pretty low calorie drink as is, however this variety is packed with flavor and tastes like it should be way higher in calories than it actually is. Give these drinks a try at home, and let me know how you like them in the comments!

Did you know The Chopping Block offers private cocktail parties? Request more information on learning how to mix drinks with your friends with a professional mixologist at your personalized cocktail party. For more help making summer cocktails at home, download our free guide: The Perfect Cocktail.