My birthday was last week, and one of my favorite things to do is to bake my own birthday cake! I get to make whatever I’m craving and it’s just plain fun for me. Sometimes eating it includes friends, sometimes it’s just my husband and I (with plenty of leftovers) – but for some reason, taking the time to bake a big ol’ cake for myself just makes me smile.

As I asked myself, “What are you in the mood for this year?” it dawned on me that I had “given up” sugar for Lent – and my birthday was smack dab in the middle of it. Now I didn’t give up ALL sugar – like the residual sugar that might be in, say, Prosecco (heaven forbid!), but I did decide to actively pass on “sweets”. When I realized that birthday cake definitely fell into that category, it occurred to me that I had not thought this thing through clearly! Undaunted, however, I decided there just had to be a way to create something festive that didn’t qualify as a “sweet”, that I could still stick a candle into.

At first I was thinking I could make something with bagels as a starting point, but I couldn’t get past how awkward and bulky that might be (although it’s still dancing in the back of my mind!). Talking with some of my coworkers at The Chopping Block about my dilemma, somewhere along the line the idea of using crêpes came up… and with crêpe cakes sort of always humming in the background these days, it seemed like a great idea! But what about the filling? What about the icing?

As I tossed around a few savory ideas, the thought of using smoked fish kept popping up. So, why not? I love smoked fish! I was originally planning on using smoked whitefish, but when I ran across some really nice hickory-smoked salmon, I couldn’t resist. 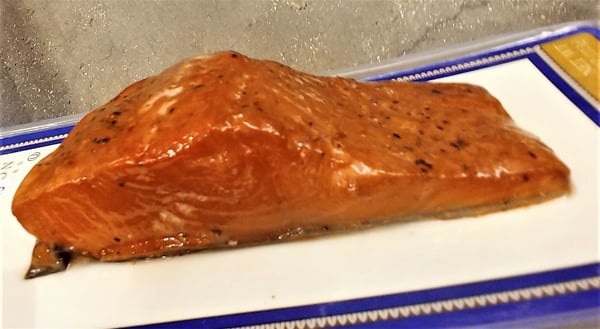 I thought I’d have to go to the fish market or a specialty smoked fish store to find it, but it was right there at the grocery store, sealed in blister packs in 4-oz portions. I bought a pound in total and was ready to go.

I knew from experience that my crêpe batter would have to rest for at least 30 minutes before I could use it, so when I got home I decided to make the batter first and leave that yummy-looking smoked salmon aside for just a bit.

For my crêpes, I turned to my favorite crêpe batter recipe that Chef Sara Salzinski gave us in her blog post. I’ve used this so many times, and it’s perfect! The only change I made was that I left out the sugar – I mean, isn’t that what started this whole thing? Instead, I added a little extra salt and some freshly ground pepper:

I mixed the flour, salt and pepper in one bowl, and whisked together the eggs and milk (just 1 cup, the rest is to correct the consistency later, if need be) in another. I added the egg mixture into the flour mixture (wet ingredients into dry) and whisked until the batter just came together. Then I whisked in the melted butter. As I mentioned, the batter needs to rest for at least 30 minutes, so I just popped it in the refrigerator while I played around with that smoked salmon.

I broke up 3 of those packs of smoked salmon (12 oz) and put them in the food processor along with:

I processed this until it was fairly smooth and of spreadable consistency. If you try this and you don’t think it will spread easily, you can always add more milk – but just a little at a time – until you get the result you want. Once this was all processed together, I then roughly chopped the remaining 4-oz package of smoked salmon and folded it into the cream cheese mixture to give it a bit of chew and texture. I added salt and pepper, as needed. Also, note that you’re going to give that last bit of salmon only a rough-chop; it will naturally break apart more to just the right size when you fold it into the mixture. You can see the larger bits of salmon here. 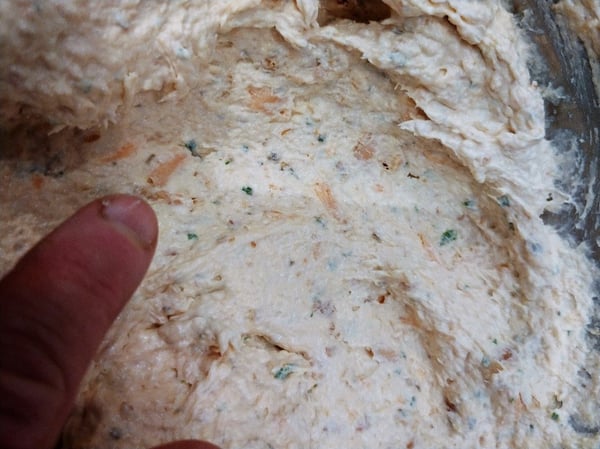 And just like that, I had my “cake filling”!

When I removed my crêpe batter from the refrigerator, I gave it a little stir. It should be about the consistency of heavy cream and I felt it was a little thick, so I added a bit more milk until I was happy. I also melted some butter to use in making the crêpes and heated up my cast iron skillet. I had decided I would be stacking the crêpes in an 8” cake pan, so I used an 8” skillet. You can use any kind of cookware for this, you don’t need a “special” crêpe pan! Certainly a non-stick skillet will make “flipping” the crêpe easier because it’s lighter weight than cast iron, but my only non-stick skillet is 10”. As for my cast iron skillet, it’s pretty “non-stick”, as I use it a lot and it’s so well-seasoned – so I’m very comfortable using it to make crêpes.

Just so you can see how easily the crêpes are to make, take a peek at this video. I have to point out that we just moved and I cannot find my tripod. So I apologize that my one-handed recording may be a little rough, but I think you’ll get the idea.

As you can see, I stacked my crêpes with a sheet of waxed paper in between each one. Most times you really don’t need this, but sometimes I just like to take an extra precaution or two – especially when I’m recording. At any rate, I now had my “cake layers.”

It was now time to assemble my cake. I started by lining my 8” cake pan with a couple of sheets of plastic wrap, letting them drape generously over the sides of the pan. I dropped in a crêpe and started spreading the filling.

As you could see, when I was done, I just folded in the overhanging plastic wrap over the last crêpe, gave the cake a little press, and placed a sturdy plate on top just to keep a bit of pressure on it. It then needed to chill so it would be easier to spread the icing. Well, with our move, absolutely nothing has happened on schedule, and I got a late start making this cake – yet we wanted to be sure to enjoy it while it was still my birthday. So instead of the refrigerator, I placed the cake in the freezer for about 45 minutes; I figured between the plastic wrap and that heavy cake pan, nothing was going to completely freeze in that time. And it didn’t – it just came out firmed up and ready to ice. I opened up the plastic wrap and turned the pan upside down on a pretty plate. 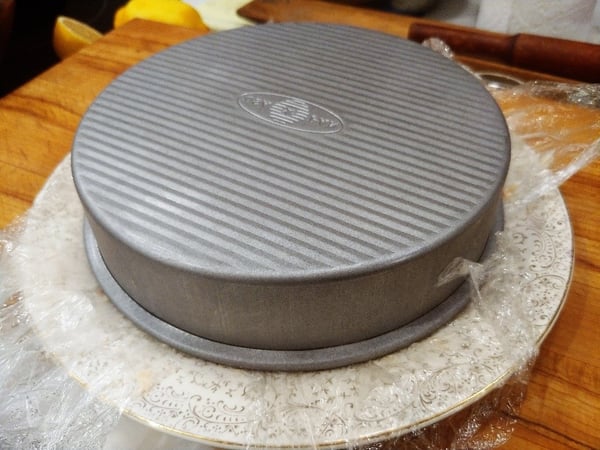 Then I just lifted the pan right off. Since the pan was lined with plastic wrap, there was no worrying about any sticking. 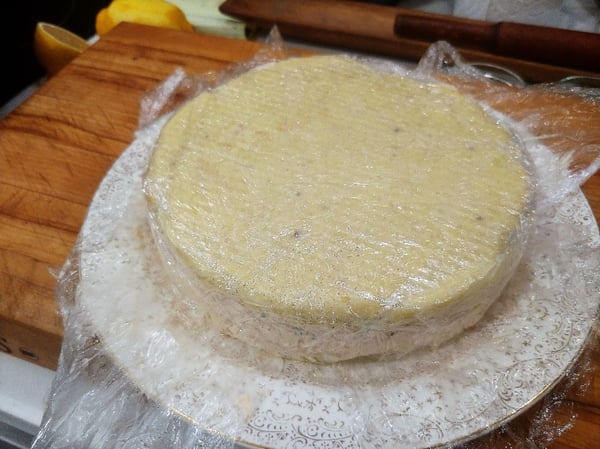 I think I let out an audible giggle at this point – it seems I had my cake!

But what’s cake without icing? While the cake was in the freezer, I had some time to think about what I wanted to use for icing and decoration. I had both sour cream and crème fraiche in my refrigerator, and figured one of them should do. I wanted a bit of citrus to complement the fish, so I zested a couple of lemons and then finely chopped some more chives for added color and flavor. By the way, whenever I use zest as a sprinkled garnish (as opposed to mixing it into a batter, dressing, salad, etc.), I like to zest the fruit a little before I need it and spread it out on a plate in a thin layer. That gives the zest a chance to dry out just enough for me to be able to handle it and “sprinkle” it – and it still looks plenty fresh, not all dried up or crinkly. It doesn’t take long and putting that plate in the refrigerator (uncovered) makes it go even more quickly.

Once I removed all the plastic wrap, I tried slathering a bit of sour cream on the side of the cake to see if it would hold or slide off… it held! So, right from the container, I used a small off-set spatula to ice my cake. Once it was done, I sprinkled the top with the chives and lemon zest. I did put it back in the refrigerator for about 30 minutes, just to completely set up.

And there you have it – we had birthday cake for dinner! I have to share the inside as well, it was really quite pretty. 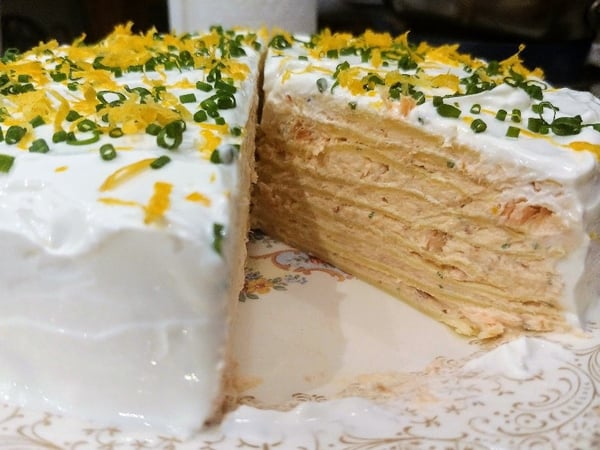 Funny – I think I ended up with one “sweet” cake! And just in case anyone is counting, I used nine crêpes in all. While I was assembling it, I got so excited that it was all coming together I lost count when I was shooting the video!

So that was my little adventure in alternative cake-baking. Although I doubt I’ll need it again to celebrate a birthday, I think I’m going to keep this in mind, maybe for a mini-appetizer version. Not to mention I realized that one reason why there seems to be a crêpe-cake craze right now is that they’re just not that hard to do. I believe that once Lent is over, there may be a chocolate or Nutella crêpe cake in my future… with a little bit of Chantilly cream!

Are you inspired to try making some crêpes? In April, The Chopping Block is offering our French Crêperie class at the Merchandise Mart on April 13 and at Lincoln Square on April 20 – both with space still available.