The average gym goer with a goal of fat loss would probably see some improvements to their physique if they added some protein into their diet and removed some carbs and fats. That's easier said than done, and it doesn't help that a lot of convenient foods to eat on-the-go or in small bites tend to not have much protein in them.

I was recently talking with a client who said he was snacking on protein bars between meals. Unfortunately, the average protein bar has about 15-20g protein and 200-250 total calories. The ones he was eating contained 20g of protein (80 calories) and a total of 220 calories, meaning that 140 calories weren't from protein, so it was really just over one third protein. Having several of these can make you overshoot your daily calories pretty easily. He asked why the carbs and fats had to be so high in these bars, and I told him that protein powder doesn't really hold together that well without other standard baking ingredients, so you’ll run into this issue often.

The only foods that are pretty much all protein are very lean meats, protein powder mixed with water or  unsweetened almond milk, and 0% fat Greek yogurt. For some of us, eating a handful of grilled chicken as a snack might not sound too bad, but for the majority it's not really ideal, and not everyone enjoys the bitterness of Greek yogurt. Protein shakes mixed with water in a blender bottle are my go-to after a workout or quickly in between clients, but they’re not the most fun or satiating snack either. However, a quick and easy breakfast idea I suggest to my clients is to blend up cold coffee with ice cubes and frozen fruit (usually a banana) and a scoop or two of protein powder. You can even freeze the coffee protein blend into ice cubes.

Here are some variations I've experimented with:

The banana (or any other fruit) added to the mixture makes these a creamier treat, but if you’re looking for a lower calorie snack you can also do just water, coffee, or even almond milk mixed with protein powder and then toss a toothpick into each cube holder. You can experiment with different ratios of protein to liquid - obviously the lower the protein to liquid ratio the the more “icy” these will be, but you’ll be able to make a larger batch with less calories. Side note: you’ll want to use standard ice cube trays for this. I only have giant whiskey ice cube trays so these were a little awkward to eat. 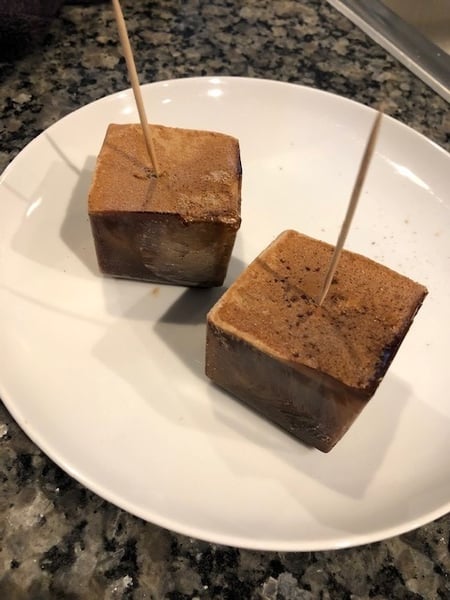 Turn your ice cubes into popsicles by using Dixie cups with wood sticks to make a larger treat. I found these are easier to eat if you change the consistency of the mixture by adding in some 0% Greek yogurt. I used 1 cup of yogurt, 1/2 cup of unsweetened almond milk, and 2 scoops of whey which made two servings in 8 oz cups. 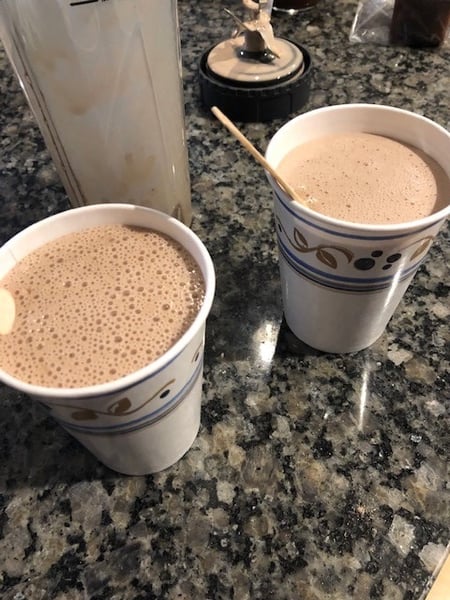 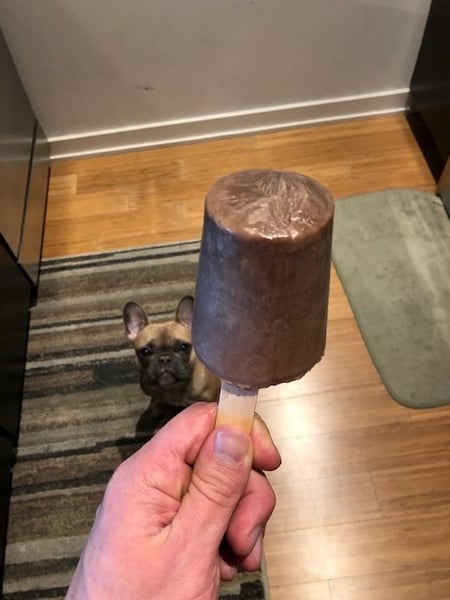 My fiancé has been making this as a healthy dessert for years now. We love ice cream but aren't big fans of the low calorie options on the market. One of our favorite recipes is:

Premix the protein powder and almond milk before blending for a creamier texture. We're going for an ice cream consistency here so we don't want the mix to be too runny. You can also opt to make your treat more of a smoothie bowl as I did here. 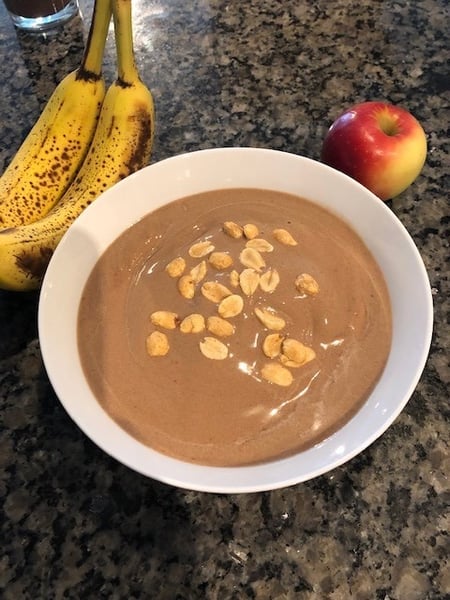 There are a million ways to customize these recipes, so experiment with different protein flavors, try using almond milk, regular milk, coffee, or even just water with a higher concentration of protein in it. You can also experiment with different types of protein. I have multiple 5-pound tubs of whey at home, but based on the consistency of casein protein when mixed by itself with water you’d probably get creamier popsicles using that instead, which makes sense as casein is essentially milk protein. Another idea would be to simply pour your favorite healthy smoothie into ice cube trays and enjoy it in multiple bites. With summer on the horizon, it's time to experiment with frozen treats. Leave me a comment with what you came up with!