What’s the Difference between Stock, Broth and Bone Broth?

One of the questions that seems to perplex both culinary professionals, avid and novice cooks alike is: “What’s the difference between broth and bone broth?” For most of the 22 years The Chopping Block has been open, we've been posed with a similar but different question: “What is the difference between stock and broth?” You see, the term “bone broth” is a new one, at least to most culinary professionals. I never heard the term “bone broth” until the past few years nor have I ever used it in over 40 years in the business. Thus far, every chef I have asked is pretty much in agreement that this is a term made up by food manufacturers to differentiate between their product offerings. In other words, it is primarily a term used for marketing purposes.

By introducing the term "bone broth," the food industry has just added confusion to something that already seems to confuse people. To a chef, the word “stock” is used about as frequently as we might refer to salt and pepper. It is the backbone of cooking. However, we rarely use the term "broth" because broth isn’t so much an ingredient as something that occurs during cooking a recipe. Home cooks tend to use the terms "broth" and "bouillon" as they refer to the product they purchase at the store rather than referring to its culinary origins. 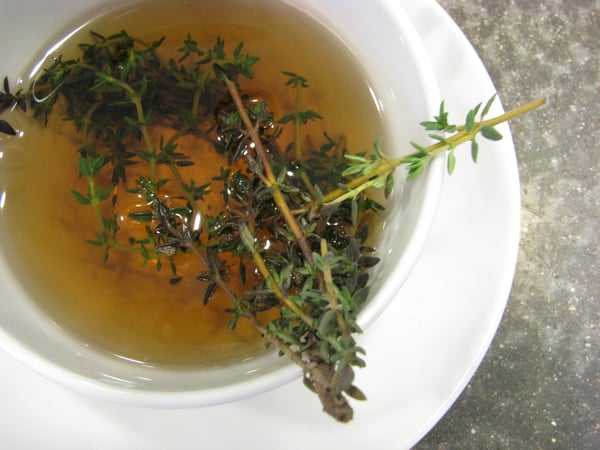 The easiest way to think about a broth and how it is created and used is to think about the example I used above about simmering beef and vegetables in liquid. I would not use that liquid to make a sauce or as an ingredient in another recipe. But if that liquid were generated during the process of making a dish, it would be an important ingredient in the dish. For example, if I were making beef stew, I might brown all the meat, add vegetables and water in the pot with the meat and simmer it. The resulting liquid would be a broth. Another example is that I might simmer a whole chicken to cook the chicken as an ingredient for a soup, I would save that liquid and use it in my soup. That again would be a broth. 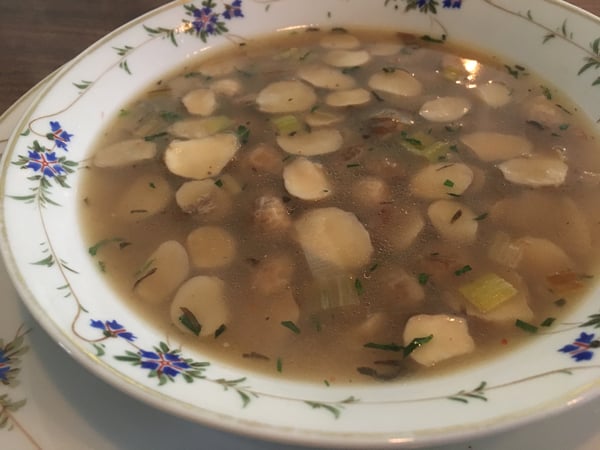 On the other hand, a stock is primarily bones with vegetables and sometimes meat trimmings. Many people frown on any meat at all in a stock as it can make it cloudy and fatty. The ingredients in stock can sometimes be browned to add color and flavor and sometimes not. The other difference between a stock and a broth is that a stock is cooked for a lot longer. The bigger the bones, the longer it takes to extract the flavor, so a good beef stock might cook for 6 to 8 hours or even longer, a chicken stock would cook a good 4 to 6 hours. Fish and vegetable stock would even cook for 1 to 2 hours. The long cooking process intensifies the flavor, reduces the liquid and extracts the collagen from the bones. The liquid or stock extracted in this method is what makes the most elegant of sauces and soups or elevates any dish it touches.

Here's a video of I made of adding duck stock to Cassoulet. You can see the quality of the stock in the amount of gelatin the bones provided.

The name bone broth is contradictory since broth traditionally isn't made from bones but I think what the food manufacturers are implying with the term “bone broth” is that the product is more concentrated in flavor, just like a stock. In fact, some chefs argue they are the same thing and that we really started seeing the term bone broth a few years ago because of the wellness and paleo trends. To confuse matters worse, some companies are now starting to make stock as well as bone broth. So, read the labels so that you know what you are buying!

Although I may not be a fan of the term "bone broth" and the confusion it causes, I am excited about the focus and attention it is bringing to stock as an ingredient. Making a really great stock is important to know how to do, so start with my videos on how to make beef and chicken stock.

I do understand that making stock isn’t something most people are going to do on a Tuesday night. We all go to the grocery store to buy broth, stock or even bone broth sometimes, and I can see today's products are improving by leaps and bounds. This is such an important ingredient in cooking and to have better choices we can grab at the grocery store make cooking just that much easier and with better results. That is clearly what we care about at The Chopping Block, so whether it to be to master the art of fine sauces in Sauce Boot Camp, learn the fundamentals of cooking in our Culinary Boot Camp, how and when to utilize essential flavors and seasonings in our Flavor Dynamics or to put together quick and easy meals we just want to “Get you Cooking”!

For more essentials on making stock and a ton of sauces to put it to good use, download our free guide on How to Make Great Sauces. Our chefs have shared their tips from making stocks and sauces in restaurants so you can create the same level of excellence at home!