A Four-Ingredient Tomato Sauce That Lives Up to Its Hype

I’ve been known to spend hours upon hours researching recipes online, their ratings and the numerous comments left by people who have made that recipe. I’m fascinated by them! And none has fascinated me and raised my curiosity as much as the much talked about, praised, maligned at times, but mostly celebrated ‘tomato, onion and butter sauce’ recipe introduced by the highly celebrated Italian cook and cookbook author Marcella Hazan.

Marcella Hazan was an Italian cooking writer whose books were published in English and who is credited with introducing the public in the United States and the United Kingdom to the traditional techniques of Italian cooking. She was considered by chefs and fellow food writers as one of the most respected and prominent cooks of Italian cuisine.

The original recipe called “Tomato Sauce III” was first introduced by Marcella Hazan in “The Classic Italian Cookbook” from 1987, (originally published in 1973). The recipe contains only four ingredients, and if you use canned tomatoes, requires very little prep work at all, and takes less than an hour to make. 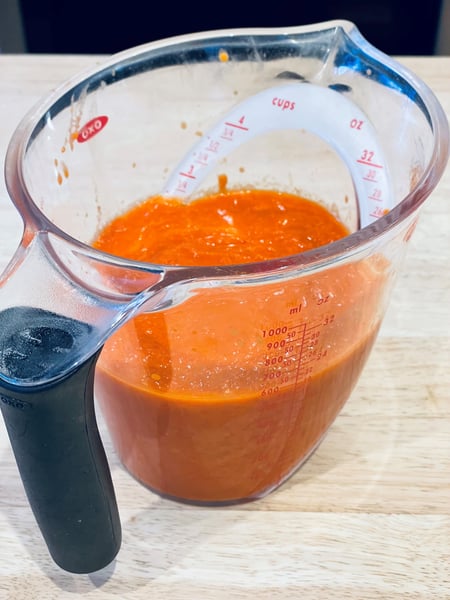 For a few years now, I glanced at and then tossed aside the notion of making the recipe. I thought that the simplicity of the recipe’s ingredients couldn’t possibly compare with the more complex, several ingredients-focused on tomato sauce recipes that I was more familiar with. Wait - there’s no garlic, no fresh herbs and the whole onion that’s used is there only as a flavoring agent, to be later removed and then tossed aside. Come on!

And then there were the comments! Most gave the recipe high praise, but there were a few that were critical of the sauce. There were some that felt the sauce was bland, at best. Others felt that without the addition of fresh herbs or garlic, it lacked the correct balance required to be a true marinara sauce, and then there were others who took great affront to the recipe, considering it an insult to the sauce that their Nonna made.

But after making the sauce myself, I can see why Food52.com considered it a genius recipe and used it as the cover for their “Genius Recipes” cookbook. It’s their most popular genius recipe and the reason why they started their column in the first place. I suggest watching the video of the recipe being prepared by Kristen Miglore, creative director for Genius. In the video she tells why Food52 chose this recipe for Genius and she demonstrates the perfect way to use frozen, fresh tomatoes in the recipe and how, after the frozen tomatoes have thawed, they can then be easily peeled and chopped. It actually is pretty genius!

So, let’s talk about the four ingredients for the recipe. It’s called “tomato, onion and butter sauce” and the title alone gives you the first three ingredients, with the fourth being a couple of pinches of salt, or as a few recipes suggested, a teaspoon of salt.

San Marzano tomatoes are considered the best canned tomatoes in the world and are considered the gold standard by which all other canned tomatoes are judged. The tomatoes originate from the small town of San Marzano sul Sarno, located near Naples, Italy, first grown in volcanic soil in the shadow of Mount Vesuvius. They’re famous for their sweetness, and rich flavor, tender texture and low acidity. They have a firm pulp and a skin that can be easily removed containing less seeds. They’re only sold canned peeled whole or cut in half. So, if you see that they’ve been pureed, chopped, or diced, then they’re not the real deal.

The sauce recipe is one of the easiest recipes there is! You simply combine one 28-ounce can of whole peeled tomatoes in their juice, one medium sweet yellow onion cut in half lengthwise, 5 tablespoons of butter and a teaspoon of salt in a 4-5-quart saucepan over medium heat, and that’s it.

There was one comment about the recipe that spoke to me. The commenter mentioned melting the butter first, and then placing the onion halves flesh side down in the simmering butter for a few seconds before adding the canned tomatoes and salt. That intrigued me for some reason, and I decided to go with what they suggested. 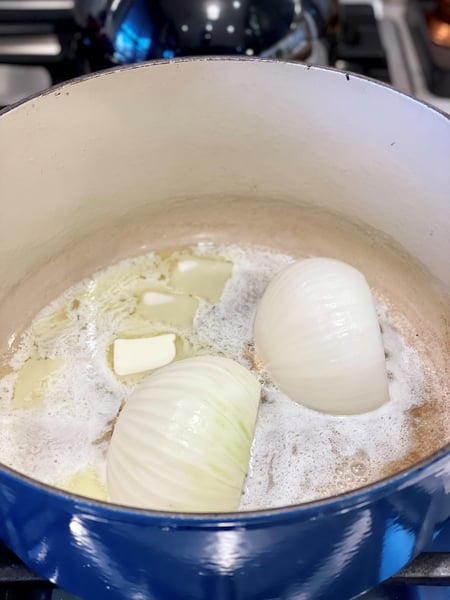 Am I glad I did? I’m not entirely sure yet. I think I need to give the original recipe a try and then make the decision. I did however use an immersion blender to puree my sauce a bit instead of mashing the softened tomatoes with the back of a wooden spoon. I did that because I wanted a smoother sauce consistency in order to use it to make a stuffed shells recipe that I had been wanting to make for several weeks. Next time I make the recipe, I will use the sauce in its rough rustic state and just place it on top of a pasta of my choosing. 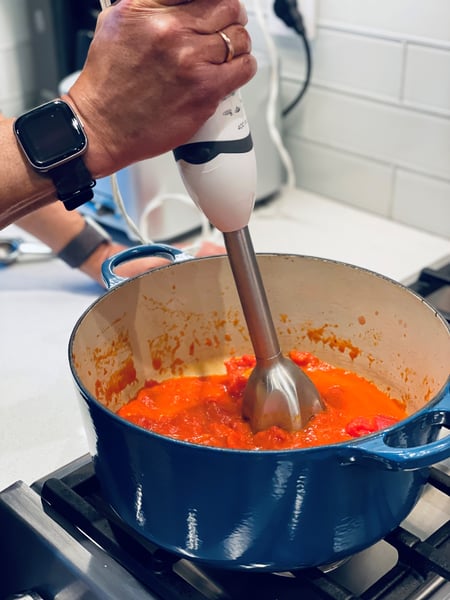 In the original recipe, the instructions were to discard the onion after it’s done its job of adding a luscious, rich sweet note to the sauce. Several other recipes suggested holding on to the onion and using it in other recipes, or dicing it up afterwards to add to the sauce. I loved Kristen Miglore's suggestion for the onion. She suggested dicing it up and using it as topping for hot dogs. I put my onion aside to use in a future recipe for a friend’s dinner party where I’ve been asked to bring a side dish. The dinner party is going to be a Schnitzelfest and I’m going to make Sweet and Sour German Green Beans with Bacon and Onion. I’m thinking the onion I saved would be perfect for the dish, when roughly chopped. But I also think that the reserved onion would be perfect chopped up and added to a chili recipe.

3 pounds of ripe tomatoes, peeled and coarsely chopped or 1 28-ounce can of San Marzano tomatoes

1 onion, peeled and cut in half lengthwise

1 teaspoon of salt, or less if you prefer 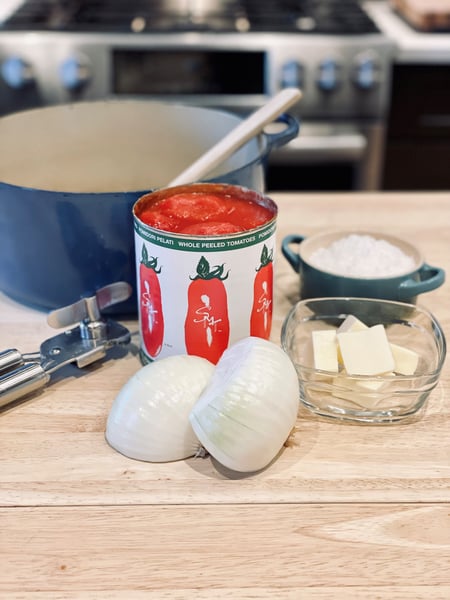 1. Combine the tomatoes, their juices, the butter and the onion halves in a 4-5-quart sauce pan. Add a teaspoon of salt or less if you prefer. 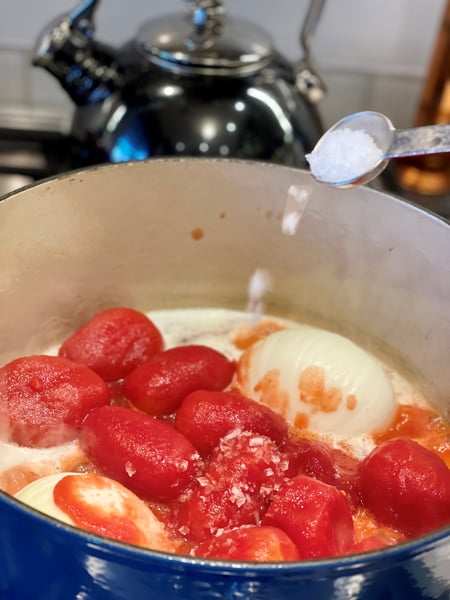 2. Place over medium heat and when the tomatoes begin to bubble lower the heat and cook to a slow but steady simmer. Cook stirring every 10 to 15 minutes, until the tomatoes are no longer watery and the sauce begins to reduce. 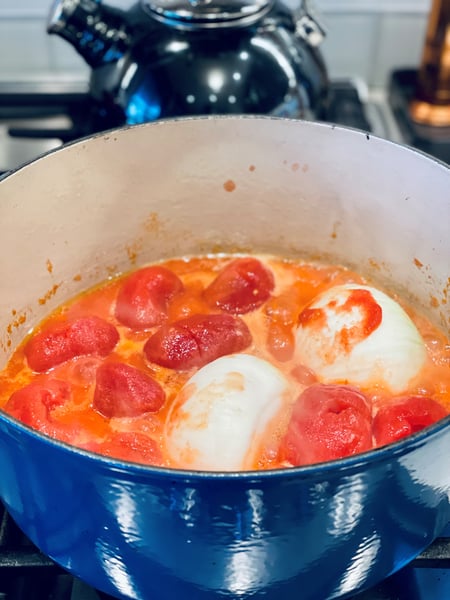 3. Once the tomatoes begin to soften, mash any large pieces with the back of a spoon. The sauce is done when the butter has separated from the tomatoes and there is no longer any liquid remaining. 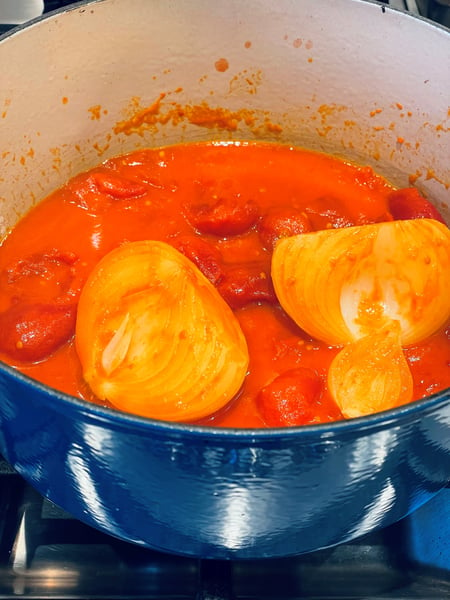 4. You can now remove the onion halves and mash the tomatoes with a potato masher for a smoother consistency or use an immersion blender to do so. 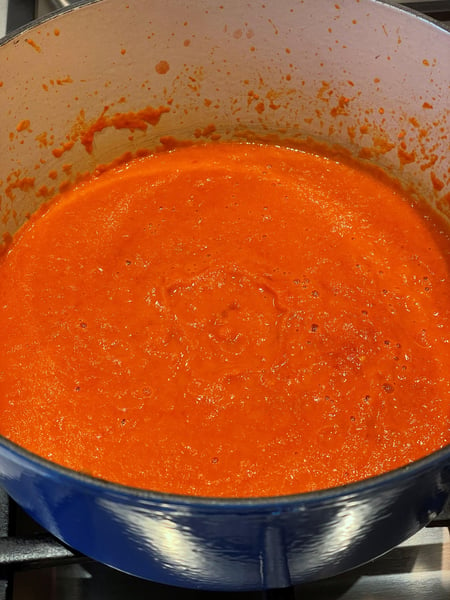 5. Serve over your favorite pasta, with a generous tossing of freshly grated Parmesan cheese. 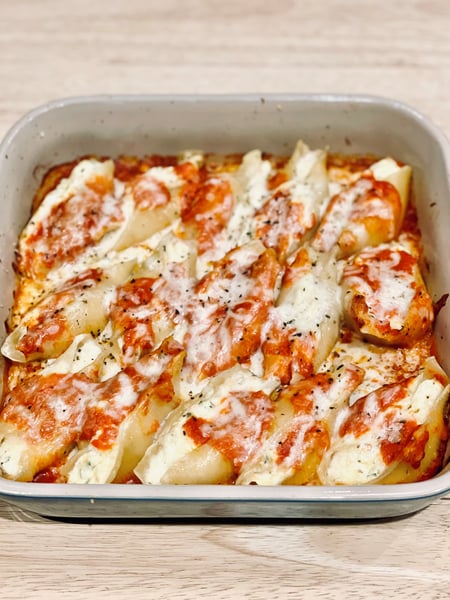 This sauce would also be perfect with homemade pasta or gnocchi. Luckily, we have two upcoming classes so you can perfect your technique for making both!

That pasta class will be one of our last classes to be held at the Merchandise Mart as we'll close that location on April 30th after 17 years. So, take the class and hang out for the rest of the day for free chef demonstrations and a huge sale as we close out the Mart.